Although the administration of dopamine precursor levodopa remains as the mainstay for the treatment of Parkinson's disease, long-term exposure to levodopa often causes a disabling complication, referred to as levodopa-induced dyskinesias. Therefore, the development of new therapeutic interventions to dampen levodopa-induced dyskinesias and parkinsonian motor deficits is needed in the treatment of Parkinson's disease. Intracerebral brain infusion has the merit of being able to specifically deliver any drug into any brain part. By using an intracerebral infusion system equipped with implantable, programmable, and refillable pumps, we show herein that continuous intrastriatal administration of memantine (MMT), which is a non-competitive N-methyl-D-aspartate receptor antagonist, attenuates levodopa-induced dyskinesias and parkinsonian signs in 6-hydroxydopamine-lesioned hemiparkinsonian mice that received daily levodopa treatment. Corroborating the general thought that overactivation of the striatal N-methyl-D-aspartate receptor function might generate levodopa-induced dyskinesias and parkinsonism, our results suggest that a continuous intrastriatal MMT infusion can be beneficial for the management of Parkinson's disease with levodopa-induced dyskinesias. Our study also provides indications for the prototypic use of pharmacological deep-brain modulation through intracerebral infusion systems for treating medically intractable movement disorders.

The administration of the dopamine precursor levodopa is a powerful tool for treating Parkinson's disease; however long-term exposure to levodopa often provokes abnormal involuntary movements (AIMs), referred to as levodopa-induced dyskinesias (LIDs) (1). LID is a major cause of disability that occurs in >80% of Parkinson's disease patients after 5 years of daily levodopa treatment (2). Although electrical deep brain stimulation can produce a striking impact on Parkinson's disease with LIDs, its therapeutic efficacy for the quality of life has usually fallen below preoperative levels during long-term follow-up (3). Therefore, the development of alternative or adjunct therapeutic interventions for overcoming both LIDs and “OFF”-period symptoms is a pressing challenge in the treatment of Parkinson's disease.

Parkinsonian symptoms result from striatal dysfunction caused by an imbalance between dopamine and glutamate transmissions (4, 5). The dysregulation of corticostriatal glutamatergic inputs leading to maladaptive synaptic plasticity in the striatum is also a well-documented process underlying LID genesis (6). At the striatal postsynaptic level, the interactions of D1-type dopamine receptors with glutamate receptors, particularly N-methyl-D-aspartate (NMDA) receptors and metabotropic glutamate receptors, appear to be especially relevant (6–9). Accordingly, oral administration of compounds targeting NMDA receptors or specific subtypes of metabotropic glutamate receptors (mGluR4 and mGluR5) has been challenged in clinical practice (8). Currently, the oral administration of amantadine, which is a non-competitive NMDA receptor antagonist, represents the only recommended adjunct therapy for reducing LIDs in patients with Parkinson's disease (9). However, its low therapeutic efficacy and various adverse effects have limited its clinical use.

Applying the intracerebral brain infusion (iCBI) technique for brain disorder treatment has a long history in experimental and clinical studies on Parkinson's disease [for examples, see (10–12)]. Interestingly, Whone et al. (13) recently reported the clinical use of a new and sophisticated drug delivery system for intermittent intraputamenal infusion of the glial cell line-derived neurotrophic factor in patients with Parkinson's disease. The present study was undertaken to examine if the continuous intrastriatal infusion of memantine (MMT), which is a non-competitive NMDA receptor antagonist and clinically used for the treatment of dementia (14), through an iCBI system could attenuate levodopa-induced AIMs and parkinsonian signs in mice with hemiparkinsonism caused by 6-hydroxydopamine (6-OHDA) lesions. Our results suggest that continuous intrastriatal MMT infusion may represent a new therapeutic tool in treating intractable LIDs associated with Parkinson's disease.

Adult male C57BL/6 mice aged 8–9 weeks (Nihon SLC, Hamamatsu, Japan) were used. The mice were housed in a controlled environment (25 ± 1°C, 50 ± 10% humidity, and 12-h light/dark cycle) with access to food and tap water ad libitum. All experimental procedures were approved by the Institutional Animal Care and Use Committees of Tokushima University, Japan.

Under anesthesia with N2O and isoflurane (Sigma-Aldrich, St. Louis, MO, USA), the mice received an intraperitoneal (i.p.) injection of desipramine hydrochloride (an inhibitor of noradrenaline transporter, 1 mg/kg dissolved in 0.9 % saline, Wako, Osaka, Japan) and pargyline hydrochloride (an inhibitor of monoamine oxidase, 0.2 mg/kg dissolved in 0.9% saline, Sigma-Aldrich, St. Louis, MO, USA). We used these inhibitors for uptaking 6-OHDA selectively in brain dopaminergic neurons. After 15 min, they received stereotaxic injections of 6-OHDA HCl (Sigma-Aldrich; 3 μg dissolved in 0.2 μl of 0.9% saline containing 0.2% ascorbic acid) targeted into the medial forebrain bundle (MFB) on the right side. The target coordinates (AP = −1.2, L = +1.1, DV = +5.0) were according to the mouse brain atlas (15). After a recovery of 2 weeks, the 6-OHDA-lesioned mice, which showed over 80% of the spontaneous ipsilateral rotation and apomorphine (0.5 mg/kg; Sigma-Aldrich) injection-induced contralateral rotation (rotation check) at day 0 (Figure 1A), were processed for further studies. 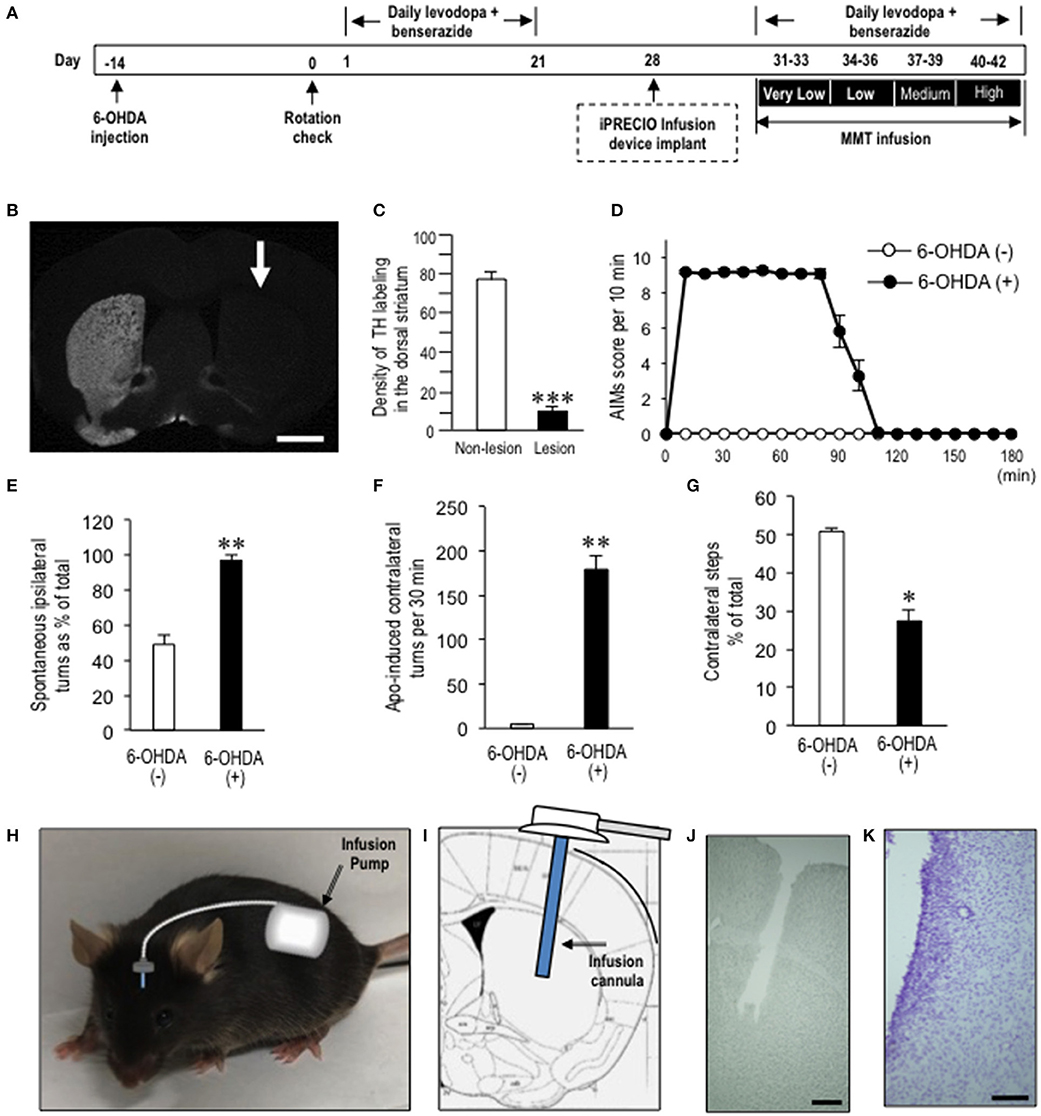 Assessment of the Rotational Behaviors

Video-based analysis of the hind limb stepping in mice was performed as reported previously (18). Mice were placed in 600-ml beaker, and the spontaneous steps of their hind limbs were video-recorded from the bottom for 5 min. Each hind limb was counted with a playback speed slowed to 0.3–0.5× using VLC media player. Total hind limb steps were summed for both the ipsilateral (intact) and contralateral (impaired) to the lesion side, and the number of contralateral steps was calculated as % of the total.

The iCBI devices equipped with the iPRECIOTM programmable micro infusion pumps (Model SMP-300, Primetech Co., Tokyo, Japan) were implanted in the mice under anesthesia with isoflurane (Sigma-Aldrich). The infusion cannulas were implanted into the dopamine-depleted striatum at the stereotaxic coordinates: AP = +0.3; L = +2.3; and DV = +3.0. MMT HCl (Wako) was dissolved in 0.01 M phosphate-buffered saline at pH 7.2 (PBS), then applied for the infusion pumps. The used concentrations of MMT were determined by the solubility to PBS of MMT.

Immunostaining procedures and microscopic imaging were previously described (19). The mice (n = 7) were intraperitoneally injected with a lethal dose of pentobarbital (Sigma-Aldrich), and transcardially perfused with cold saline, followed by cold 4% paraformaldehyde in 0.1 M phosphate buffer (pH 7.2). The brains were removed, postfixed overnight in the same fixative at 4°C, and stored in a 10–30% sucrose gradient in 0.01 M phosphate buffered saline (pH 7.2) at 4°C for cryoprotection. Sections were cut on a cryostat at 16-μm thickness and stored in PBS containing 0.05% NaN3 until use. After blocking endogenous peroxidase activity, the free-floating sections were incubated in PBS containing 3% bovine serum albumin (PBS-BSA) for 60 min. They were then incubated in PBS-BSA with a rabbit polyclonal antibody tyrosine hydroxylase (TH) (1:200,000) (19) for 18 h. The bound antibody was detected using the Histofine Simple Stain Kit (Nichirei, Tokyo, Japan) and the tyramide signal amplification system with Cyanine3 (Perkin Elmer, Shelton, CT, USA). For Nissl staining, sections were stained with 0.1% cresyl violet acetate (Wako) dissolved in distilled water. Digital microscopy images were captured using an Olympus BX51 microscope (Olympus, Tokyo, Japan), imported into Adobe Photoshop CS4, and digitally processed for adjustments of contrast, brightness, and color balance.

Generation and Characterization of a Dyskinetic Mouse Model

The hemiparkinsonian mice were produced by unilateral injections of 6-OHDA targeted into the right MFB (Figure 1A). TH immunostaining revealed severe loss of striatal dopaminergic afferents in the mice with 6-OHDA lesions (Figure 1B). The quantifications revealed a >80% reduction of TH immunoreactivity in the dorsal striatum on the 6-OHDA-lesioned side compared to the non-lesioned side (Figure 1C; P < 0.001, paired two-tailed t-test). After a period of 3 weeks of levodopa/benserazide treatment, the AIM scoring tests revealed that all 6-OHDA-lesioned mice manifested LIDs. Figure 1D shows the time-sequential changes of AIMs in the dyskinetic mice, which were maximal 10–60 min after levodopa administration (i.e., “ON” period) and almost disappeared after 120 min. 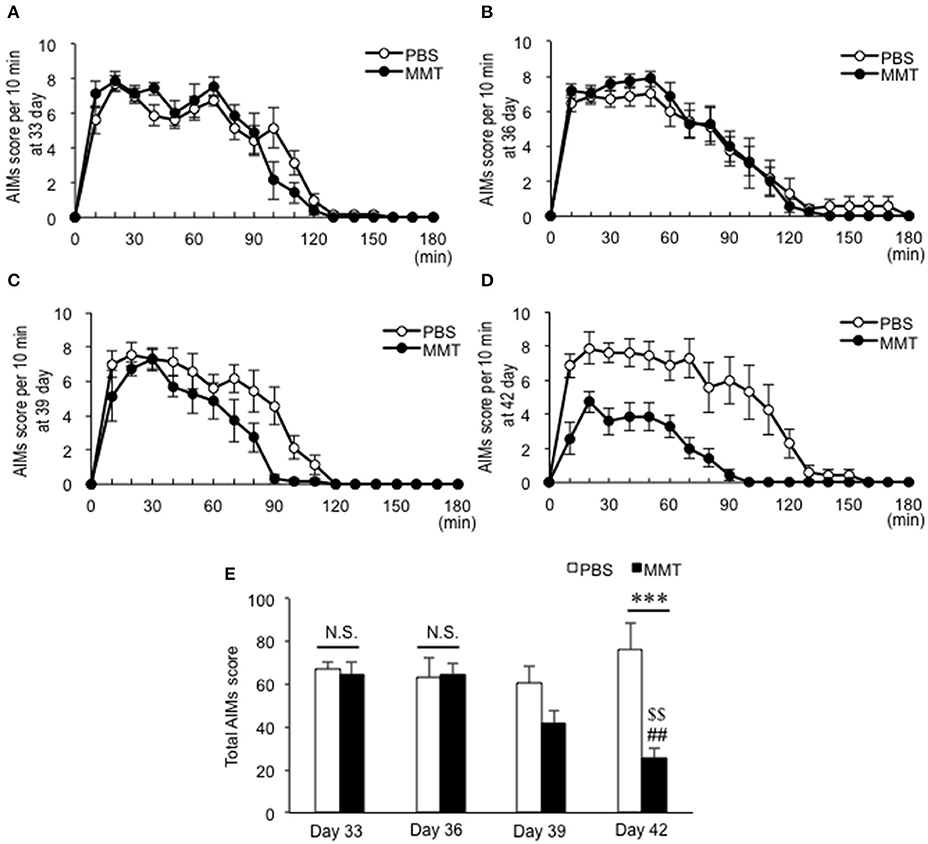 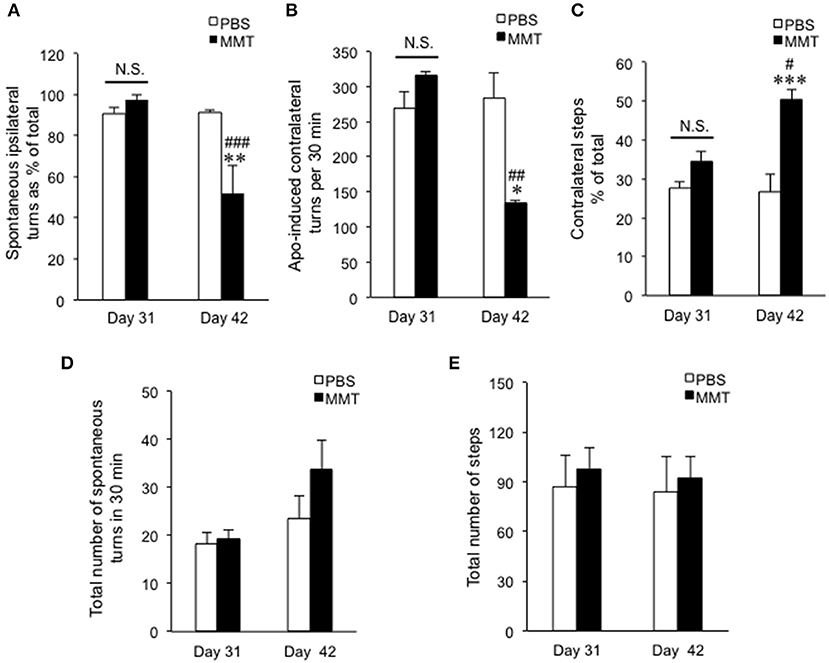 The long-term and repeated pharmacological overactivation of striatal dopamine receptors, which leads to an altered glutamatergic transmission at several nodes of the corticobasal ganglia circuit, is generally viewed as the principal cause for LIDs in patients with advanced Parkinson's disease. We provide herein experimental evidence that intrastriatal MMT infusion exerts therapeutic effects on both levodopa-induced AIMs and parkinsonian signs in mice with hemiparkinsonism caused by 6-OHDA. Although there is a difficulty to distinguish improvement of akinesia from induction of dyskinesia in rodent models of Parkinson's disease, and further studies using primate models are essentially required, our finding in this study corroborates the general thought that the overactivation of striatal NMDA receptors, which mediate a slow, Ca2+-permeable component of excitatory synaptic transmission (22), might generate LIDs and “OFF”-period motor deficits in Parkinson's disease (4, 5, 7, 23). Indeed, clinical observations have shown the positive therapeutic potential of the NMDA receptor antagonists amantadine (24) and MMT (25–28) in the treatment of LIDs and parkinsonian symptoms in patients with Parkinson's disease. However, the oral administration of NMDA antagonists, particularly amantadine, causes considerable noncerebral side effects, such as cardiovascular, gastrointestinal, and skin reactions (8, 26). It also incites cerebral adverse effects of nonstriatal origin, such as psychosis, hallucinations, and learning and memory deficit, because of the wide distribution of NMDA receptors in the brain (29). Considering the structural similarity between amantadine and MMT, these central and systemic side effects limit the usable dose of NMDA antagonists and reduce their clinical impact (30). A recent report of meta-analysis comparing multiple medicines in Alzheimer's disease patients showed that oral administration of MMT is safe enough (31). However, it is not approved for the treatment of Parkinson's disease patients yet. In a previous study, although single injection of MMT or amantadine did reduce LIDs in the 6-OHDA-lesioned rats, this antidyskinetic effect has disappeared by subchronic administration for a few days (32). It indicates that drug tolerance to MMT or amantadine developed during the treatment. A clinical study also reported that the beneficial effect of amantadine on dyskinesia was lost within 8 months (33). The underlying mechanism of MMT or amantadine tolerance, including whether it is caused by central or peripheral reasons, is still unknown. Given that the drug tolerance by repeated oral or systemic administration limits the therapeutic efficacy, it is worth developing an alternative drug delivery system, such as iCBI, despite of the risks, such as complications accompanying physical invasion.

The iCBI system makes it possible to deliver appropriately adjusted doses of desired drugs into specific brain regions. Therefore, intrastriatal infusion of NMDA antagonists through the iCBI system may provide higher therapeutic efficacy while reducing the adverse side effects of their oral or systemic administration in the treatment of LIDs. For the issue of drug tolerance, longer iCBI treatment of NMDA antagonists than this study should be examined. With the hope that programmable iCBI devices with a clinical application can be developed, we suggest the pharmacological deep-brain modulation as an alternative therapeutic approach for the treatment of Parkinson's disease and, potentially, other movement disorders.

The animal study was reviewed and approved by The Institutional Animal Care and Use Committees of Tokushima University, Japan.

This work was supported in part by grants from the Ministry of Education, Culture, Sports, Science and Technology of Japan (grants-in-aid for Scientific Research Nos. 26430054 and 16k10788); Japan Agency for Medical Research and Development (AMED; No. 16ek0109182h0001); and the Research Cluster of Tokushima University (No. 1702004).

Copyright © 2019 Ogawa, Zhou, Tsuji, Kasahara and Goto. This is an open-access article distributed under the terms of the Creative Commons Attribution License (CC BY). The use, distribution or reproduction in other forums is permitted, provided the original author(s) and the copyright owner(s) are credited and that the original publication in this journal is cited, in accordance with accepted academic practice. No use, distribution or reproduction is permitted which does not comply with these terms.