Background: Parkinson's disease (PD) is the second most common neurodegenerative disease, and α-synuclein plays a critical role in the pathogenesis of PD. Studies have revealed controversial results regarding the correlation between motor severity and α-synuclein levels in peripheral blood from patients with PD.

Parkinson's disease (PD) is the second most common neurodegenerative disease, affecting more than 1% of the global population over the age of 65 years (1). The severity of motor symptoms in patients with PD is commonly evaluated with unified Parkinson's disease rating scale (2) or modified Hoehn and Yahr scale (modified H-Y scale) (3). Because those scales are subjective, there are many objective biomarkers to be developed to diagnose PD or predict disease progression currently. Depending on pathogenesis, many published studies focused on α-synuclein, which is a major constituent of Lewy bodies (4). The majority of researches on levels of different subtype α-synuclein including total (5–7), oligomeric (8, 9), and phosphorylated (9, 10) form in body fluids have been conducted for the cerebrospinal fluid (CSF) (8–14); however, only a few studies have investigated α-synuclein levels in peripheral blood (5–7, 15, 16), and two studies have been done in serum (16, 17). The results of those body fluids between patients with PD and normal control has been controversial (18, 19); additionally, the correlation between the severity of motor symptoms and the levels of α-synuclein in CSF or peripheral blood is still under investigation (7, 9). Therefore, we investigated whether the plasma or serum α-synuclein levels of patients with PD are correlated with motor symptom severity by using a newly developed commercial antibody.

Ethics Approval and Consent to Participate

This study was approved by the Institutional Review Board of Chang Gung Memorial Hospital (CGMH) in Taiwan (IRB No. 104-7443B) and all examinations were performed after obtaining written informed consents.

The appropriate number was predicted by G-power, which was a software developed by Universitat Dusseldorf (20). Under preset alpha error (0.05), statistical power (0.9), and medium effect size (0.5), the predicted sample number was 86. On the other hand, Online web-tool, easyROC (http://www.biosoft.hacettepe.edu.tr/easyROC/), was used to predict adequate sample size in ROC curve. Based on alpha error (0.05), statistical power (0.9), area under the ROC curve (0.75), and allocation ratio (1), the predicted minimal sample size (control and case) was 20 and 20, respectively. Thus, we recruited 88 participants, including 48 patients with PD (hereinafter referred to as PDs) and 40 healthy controls (hereinafter referred to as HCs). PD was diagnosed by an experienced neurologist according to the Movement Disorder Society Clinical Diagnostic Criteria for PD (21). We collected clinical information including initial presentation, sex, age, disease duration, cognitive function, and modified H-Y scale scores. According to the modified H-Y scale, patients scoring between 1 and 3 were classified as having early PD, whereas those scoring between 4 and 5 were classified as having advanced PD.

Venous blood (10 mL) was drawn and blood samples were processed to obtain plasma or serum from each participant within 1 h of collection. Plasma was prepared after collection of the whole blood in Ethylenediaminetetraacetic acid-treated tube, while serum was prepared by leaving blood samples undisturbed at room temperature for 15–30 min. Those processed samples were treated by centrifugation for 15 min at 1,500 g in refrigerated condition, and the resulting supernatant was designated plasma or serum. Following centrifugation, the serum or plasma was immediately transferred into a clean and low residue polypropylene tube using a pipette with low-residue tip. Plasma and serum were stored at −80°C for <3 months before examination. Samples which are hemolyzed, icteric or lipemic were not used.

Numerical variables were expressed as the mean ± standard deviation. Because of small sample size, the Mann-Whitney U test was used for the comparisons of disease activity between HCs and PDs. A receiver operating characteristic (ROC) curve was applied for distinguishing between the PDs and HCs via the levels of serum or plasma α-synuclein if difference between two groups existed. Additionally, correlation between serum and plasma α-synuclein level, and the relationship between the levels of serum or plasma α-synuclein and disease activity were analyzed using linear regression, and correlation coefficient (r) was presented. We performed all analyses using SPSS software, version 24 (IBM, Armonk, NY, USA). A P-value of < 0.05 was considered significant.

Table 1. Clinical characteristics of the patients with PD and healthy controls. 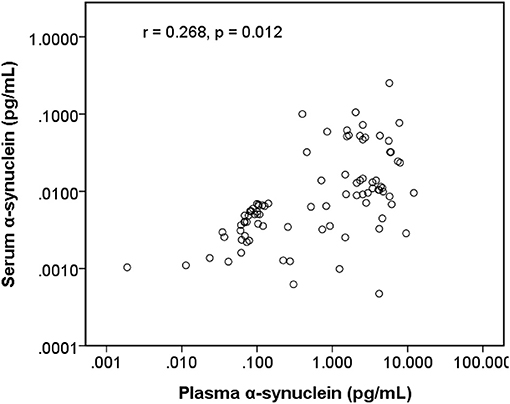 Currently, no reliable biofluid biomarker for distinguishing PDs from HCs has been found. In our study, we demonstrated that not only plasma but also serum α-synuclein levels were higher in the patients with PD than in the HCs through IMR. For the first time, we demonstrated a positive correlation between the serum levels of α-synuclein and the degree of motor symptoms among the patients with early stages of PD. Our observations indicate the potential of serum α-synuclein to be used as an objective biomarker for PD for accurate diagnosis or disease progression monitoring.

α-synuclein, a principal constituent of Lewy bodies, plays a crucial role in the pathogenesis of PD. Because α-synuclein is widely expressed by central and peripheral tissue (24, 25), many studies have targeted different forms of α-synuclein in different samples, such as CSF or blood. Total, oligomeric or phosphorylated α-synuclein levels in CSF could distinguish PDs from HCs (26), and only oligomeric α-synuclein levels in CSF correlated negatively with the severity of motor symptoms (9). By contrast, significant increases in plasma α-synuclein levels have been found in PD patients in previously published studies (5–7, 15, 19). For example, Lee et al. used a commercially available enzyme-linked immunosorbent assay (ELISA) kit to measure the plasma α-synuclein level in subjects with PD. According to the manufacturer's protocol (RPN 5902, Amersham Biosciences, UK), the monoclonal antibody was specific for human synuclein peptide 117–131. The level of α-synuclein was 79.9 ± 4.0 pg/ml in patients with PD (5). Ding et al. used a Chinese sourced commercial ELISA showing higher plasma level of α-synuclein (319.56 ± 64.22 vs. 274.31 ± 70.71, p = 0.004) than controls (6). Foulds et al. reported vastly different results using same monoclonal antibody in individual subjects (15), which might be due to their recombinant standard was highly impure. According to the published papers, the commonly used technologies for assaying plasma α-synuclein included bead-based multi-analyte profiling technology (Luminex), sandwiched ELISA or IMR (19). However, these reports showed highly inconsistent results in levels of plasma α-synuclein. Mata et al. and Shi et al. used Luminex assays to evaluate plasma α-synuclein in PD; and the levels were 46.9 ± 32.6 and 36.8 ± 23.9 ng/mL, respectively (27, 28). The antibodies used in both studies were biotinylated anti-human α-synuclein antibody (R&D systems, Minneapolis, MN, USA). It is unclear, however, whether these α-synuclein species were oligomers or monomers conjugated with other macromolecules.

Moreover, Wang et al. used the same kit to measure plasma α-synuclein and found sub-ng/ml levels in PD and HC (29). The principal origin of α-synuclein are red blood cells (RBCs) (>99% of its blood levels), with the residue in plasma. Hemolysis and platelet contamination confound the results. The inconsistence in levels of plasma α-synuclein among groups using the same assay kits might be possibly caused by plasma preparation and storage period of plasma samples. Groups using ELISA technologies reported several tens of pg/ml, or thousands of ng/ml for plasma α-synuclein in PD and HC (5, 15). The levels of plasma α-synuclein using ELISA are different from that using Luminex. This difference could be due to antibodies, signal sensing technologies and sample preparation. Therefore, we could also expect that high heterogeneity across studies could be attributed to the co-existence of several components such as assays, disease duration, disease staging, and study setting.

This study has several limitations. First, this is a cross-sectional study, so a longitudinal study is needed to keep track of the plasma or serum α-synuclein levels in one subject to disclose the change of α-synuclein level in plasma or serum over the time during the disease progression. Second, the sample size of the study is still relatively small; therefore, a larger and multi-center study discovering the relationship between α-synuclein in peripheral blood and disease activity is necessary to validate the practicality of using plasma and serum α-synuclein as a reliable biomarker for PD. Third, because the selected antibody in our study only identify very short amino acid sequence 121–125 of α-synuclein, alpha-synuclein with epitope modified by polymerization, methylation, phosphorylation, or other chemical reaction could be not detected in the study. Moreover, measuring sub-picograms of protein may be influenced significantly by measurement bias and cross-reactivity of a selected antibody. Further studies using another commercial antibody through the same assay is necessary to validate this new technique and to reduce the influence of cross-reactivity.

This study was approved by the Institutional Review Board of Chang Gung Memorial Hospital (CGMH) in Taiwan (IRB No.104-7443B) and all examinations were performed after obtaining written informed consents.

Y-RW conceived and designed the study. S-YY, C-CY, and C-WenC conducted the experiments. C-WeiC and Y-RW analyzed the data and wrote the paper. All authors read and approved the final manuscript.

This study was sponsored by Chang Gung Memorial Hospital, Taipei, Taiwan (CMRPG3F0381; CMRPG3F0382). The funders had no role in study design, data collection and analysis, decision to publish, or preparation of the manuscript.

We thank all the patients and the staffs at the Department of Neurology of the Chang Gung Memorial Hospital Linkou Medical Center for their valuable support of this study.

Copyright © 2020 Chang, Yang, Yang, Chang and Wu. This is an open-access article distributed under the terms of the Creative Commons Attribution License (CC BY). The use, distribution or reproduction in other forums is permitted, provided the original author(s) and the copyright owner(s) are credited and that the original publication in this journal is cited, in accordance with accepted academic practice. No use, distribution or reproduction is permitted which does not comply with these terms.