Purpose: The aim of this study was to explore the clinical characteristics of different sleep perception types of obstructive sleep apnea–hypopnea syndrome (OSAHS) patients and to analyze the correlation between sleep perception and polysomnography (PSG) indicators in OSAHS patients.

Methods: We retrospectively analyzed 355 patients diagnosed with OSAHS by PSG at the Sleep Medicine Center of Shengjing Hospital of China Medical University. Patients saw a doctor due to snoring and daytime sleepiness from March 2017 to March 2018. We excluded the patients who are <18 years old, had a history of OSAHS treatment, had other sleep and psychiatric disorders, and could not provide complete data. According to the patients' explanation, medical history, PSG indicators, and morning questionnaire after PSG, the patients were divided into normal sleep perception (NSP), positive sleep perception abnormality (PSPA), and negative sleep perception abnormality (NSPA). We analyze the demographic characteristics and PSG of the three groups with ANOVA and non-parametric tests. In addition, we conducted correlation analysis between sleep perception and PSG indicators.

Obstructive sleep apnea–hypopnea syndrome (OSAHS) is a common sleep-related breathing disease. The pathophysiology is characterized by intermittent hypoxia and sleep fragmentation at night (1). It has become a hot topic due to its close link to cardiovascular, cerebrovascular, and metabolic diseases; other multiple organ system damage; and even sudden death. From the patients' medical history, we found that although they slept all night, the patients still felt fatigued and sleepy during the daytime. This phenomenon prompts us to pay more attention to the sleep perception of the patients with OSAHS.

Sleep perception refers to the self-assessment of an individual's sleep state and mainly includes a subjective description of the quantity and quality of his or her sleep. This subjective evaluation has become one of the foundations for the diagnosis and evaluation of sleep disorders (2). The overall sleep quality depends on whether the sleep time can meet the physical and mental demands of the body during daytime. Therefore, subjective perception and judgment of sleep time are the basis for sleep perception, including sleep latency (SL) and total sleep time (TST). Most studies toward sleep perception focus on insomnia because sleep misperception makes patients with insomnia believe that they are getting insufficient sleep, which subsequently causes their condition to aggravate. Studies suggest that OSAHS patients, in contrast to insomnia patients, have intact sleep perception, even if they sleep less (3). However, it was found that there were significant differences between subjective and objective sleep parameters through analysis of subjective assessment of sleep parameters in patients with OSAHS and objective sleep parameters detected by polysomnography (PSG) (4). Abnormal sleep perception mainly refers to the discrepancy between subjective assessment and objective detection, which can be divided into positive discrepancy and negative discrepancy. Patients with insomnia often show negative discrepancy, which is overestimation of SL, underestimation of TST, and sleep efficiency. Otherwise, overestimation of TST is positive discrepancy (5). Research has provided relatively little insight into different sleep perception types in OSAHS patients, especially positive discrepancy.

The aim of this study was to investigate the clinical characteristics, PSG indicators, and sleep structure characteristics of OSAHS patients with different sleep perception types. We also discussed the related analysis of sleep perception and PSG indicators in order to provide more reliable evidence for sleep assessment and clinical classification of patients with OSAHS.

The study subjects were patients who were treated at the Sleep Medicine Center of Shengjing Hospital of China Medical University from March 2017 to March 2018. Their main symptoms were snoring and daytime sleepiness.

Exclusion criteria for patients was as follows: (1) younger than 18 years; (2) had a history of OSAHS treatment; (3) had any sleep disorders such as restless legs syndrome (RLS), narcolepsy, and parasomnia; (4) had serious psychiatric disorders; and (5) could not provide complete data. Altogether, 355 patients were diagnosed with OSAHS by PSG, 284 males and 71 females, with an average age of 43.23 ± 12.84 years.

The study subjects were instructed to fill out an application form first, so that the patients' general information (name, sex, age, chief complaint, body mass index, personal history, neck circumference, waist and hip circumference, blood pressure, complication, and so on) were collected before PSG. Patients were also instructed to fill in self-report questionnaires before the PSG for screening patients with neurological conditions and the morning questionnaire after the PSG. The study enrollment is showed in Figure 1. Strict blood pressure measurements were performed before and after the PSG. 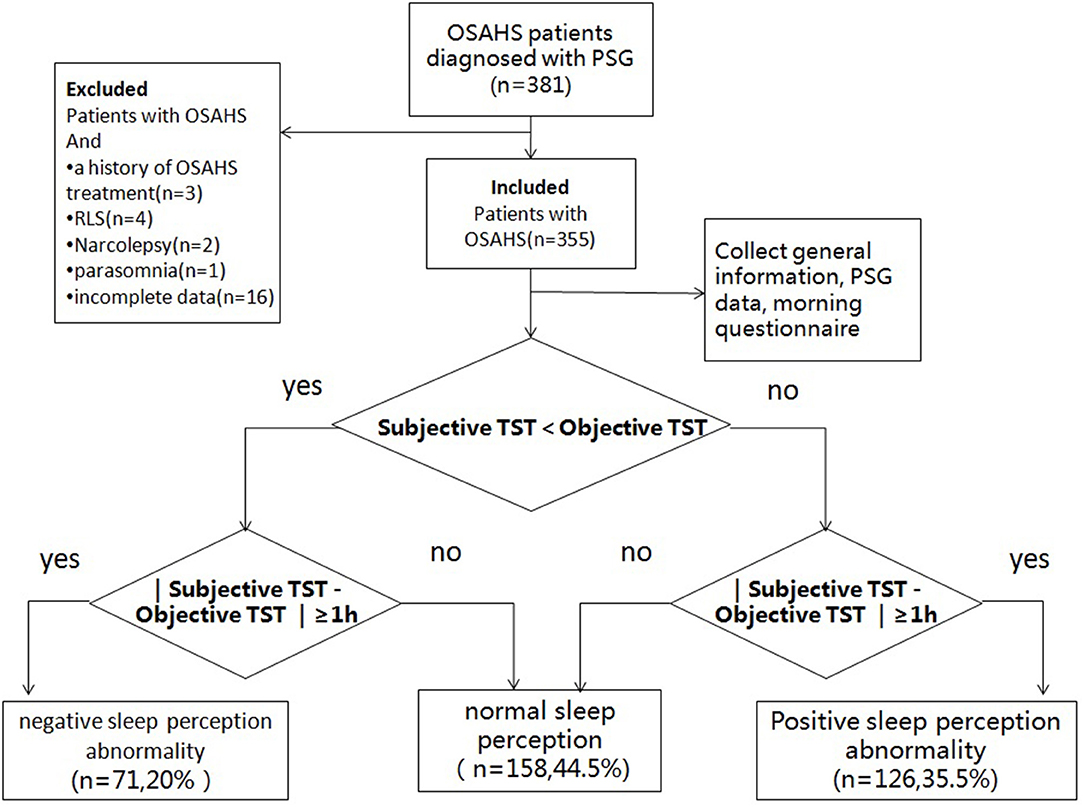 This study was approved by the medical ethics committee of the Shengjing Hospital of China Medical University, and written informed consent was obtained from all patients or their next of kin.

All subjects were monitored using a Philips Alice 6 PSG monitor. Items were recorded according to American Academy of Sleep Medicine (AASM) recommendations. All subjects underwent at least 7 h of sleep monitoring at night. On the day of the test, patients were instructed not to drink caffeinated beverages or alcohol, not to use sleep medications, and not to take naps. The results were processed by computer and then manually judged according to AASM version 2.3 (8). Score arousal during sleep stages non-rapid eye movement (NREM) or REM if there is an abrupt shift of electroencephalography (EEG) frequency including alpha, theta, and/or frequencies >16 Hz (but not spindles) that lasts at least 3 s, with at least 10 s of stable sleep preceding the change. Arousal (with respiratory events and oxygen desaturations/with limb movement) was considered to be present when there was a sequence of respiratory events and oxygen desaturations/limb movement lasting at least 10 s to cause arousal from sleep. An arousal that was not caused by respiratory events, oxygen desaturations, or limb movement can be considered a spontaneous arousal. An apnea was defined as > 90% reduction in SpO2 for at least 10 s. A hypopnea was defined as a reduction in airflow (>30%) for at least 10 s with oxygen desaturation (≥4%) or arousal. The apnea–hypopnea index (AHI) was calculated as the average number of apneas and hypopneas per hour of sleep. TS90% was the percentage of time spent in sleep below 90% oxygen saturation.

According to the International Classification of Sleep Disorders (9) published by the AASM in 2014, patients complained of snoring at night, had symptoms of sleepiness during the day, or were reported to regularly snore during sleep by a witness. Their AHI was higher than 5 times/h on the basis of the PSG detection.

Table 1. Comparison of general clinical data of the three groups of OSAHS patients with different types of sleep perception.

Objective TST and subjective TST of three groups were shown in Table 2. We observed the least objective TST in PSPA group. With regard to PSG indicators, there were significant differences in the number of spontaneous arousals and the oxygen desaturation index (ODI) of OSAHS patients with different types of sleep perception (P < 0.05). There was no significant difference in N1, N2, N3, and REM sleep among the three groups; and there were significant differences in REM latency, sleep efficiency, and wake after sleep onset (WASO) (P < 0.05). Further post hoc test of PSG indicators in the three groups has found that patients with PSPA had fewer spontaneous arousals. PSPA group had significantly lower REM latency and sleep efficiency and more WASO (see Table 2). 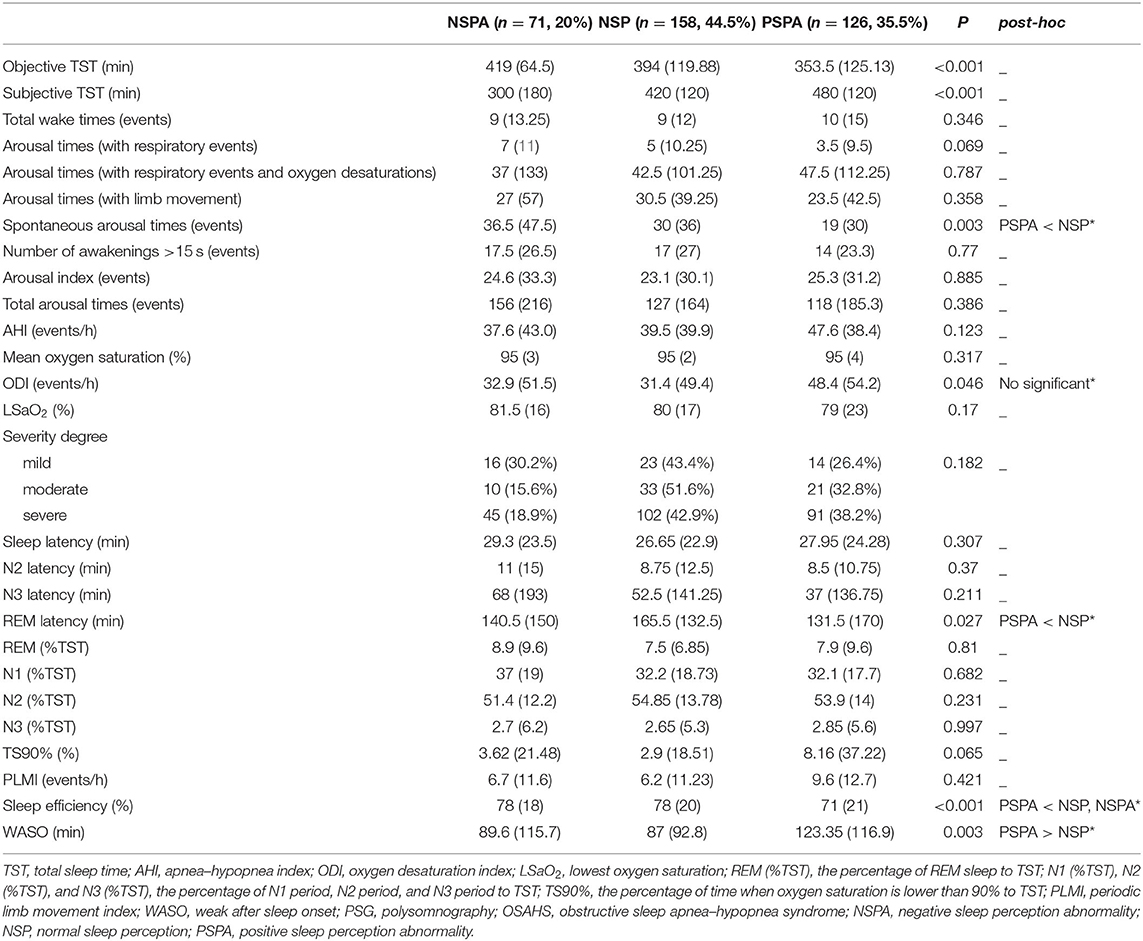 Table 2. Comparison of PSG indicators in the three groups of OSAHS patients with different types of sleep perception. 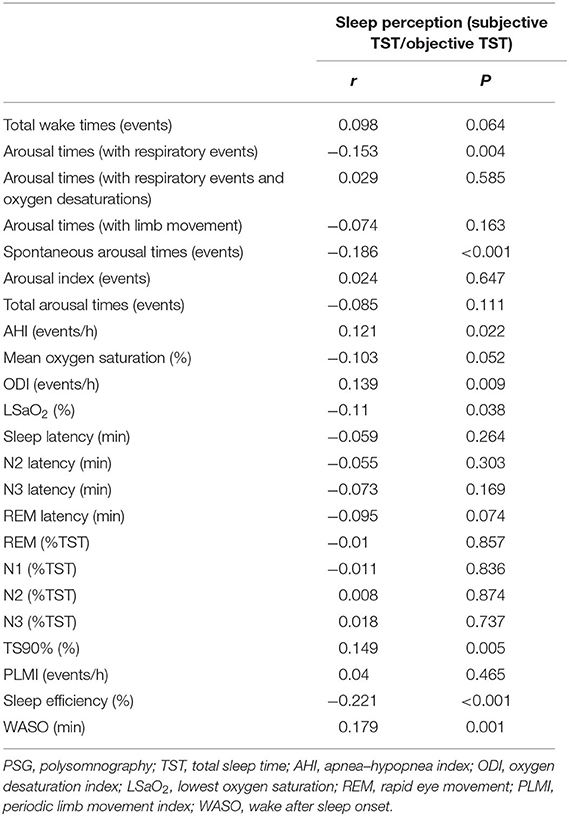 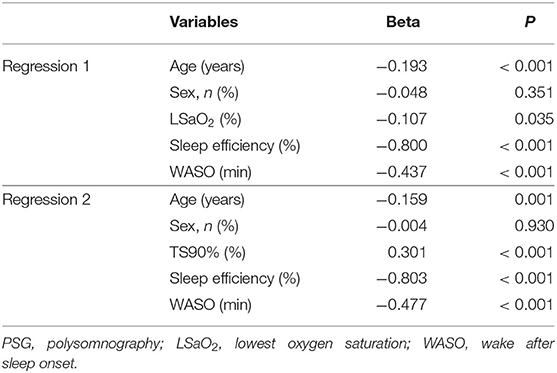 Sleep perception is a state feature, including both time and quality, which is an individual's evaluation of the sleep state. The abnormal sleep perception is mainly manifested in the differences in subjective and objective sleep time. Time perception belongs to the category of psychology. With regard to time research in psychology, there are generally three types of understanding of the difference between physical time and psychological time: biological models, cognitive models, and comprehensive models. Regardless of whether it is from a biological perspective or cognitive perspective, time perception is a mixture of internal and external factors (11). According to the time perception models, the sleep perception judgment of people with sleep disorders may be affected by many factors. Some studies have suggested that the causes of the difference between subjective perception and objective perception include individual personality characteristics, emotions, and sleep physiology, such as the individual's metabolism during sleep, the effects of EEG during sleep (increased α-δ waves), cyclic alternation patterns, and sleep staging conditions (12).

Sleep structure is another important indicator in monitoring sleep. Normal adults have a periodic sleep the entire night. The sleep cycle starts with NREM sleep and ends with REM sleep. There are about four to six sleep cycles per night. We compared the sleep stages and the SL of patients with three types of sleep perception. It was found that there was no difference in the proportion of sleep in each period of sleep. REM latency showed significant discrepancy. The OSAHS patients with abnormal sleep perception had shorter REM latency. As they entered the REM period faster and the individual sleep cycle was relatively shorter, there were more periodic sleep cycles during overnight sleep. Hyunwoo Nam et al. (17) believed that the delay of the sleep cycle plays an important role in patients with abnormal sleep perception, which is contradictory to our conclusions. We assume that the transitions of sleep cycle affect sleep perception, and the judgment of sleep cycles is accomplished through EEG activity. Previous studies have found that there is a connection between sleep perception and EEG, which reflects that the amplitude of low-frequency waves in the prefrontal cortex of negative sleep perception patients is higher than that of the normal control group, and the activity of alpha wave and gamma wave is strengthened (18). In 1982, MG Terzano et al. proposed an alternating pattern of EEG circulation during sleep, which is a periodic EEG change in NREM sleep. It is negatively correlated with subjective perceived sleep quality (19, 20). These results support the hypothesis that differences in sleep perception relate to the increase in periodic EEG activity. In addition, our result found there was a significant increase of Stage W after sleep onset (WASO) in PSPA. In the sleep cycle, humans have transient wakefulness (Stage W), which is undetectable. Hermans hypothesized that a sleep fragment needs to have a certain duration to be perceived as sleep. Sleep onset under 10 min is perceived as wake (12). Conversely, a short wakefulness during sleep state might be perceived as sleep. Therefore, future work could focus on the relationship between sleep–wake stage transition and sleep perception.

The limitation of our study is that our sleep parameters lack in-depth analysis of EEG data. EEG parameters like spindle wave might play a role in sleep perception. Some researchers suggested sleep spindles might inhibit sensory processing, especially the disengagement of disrupting and intrusive stimuli. Reduced density in sleep spindles might in turn enhance underestimation of sleep (21). EEG of OSAHS patients and their role toward the altered sleep perception is our future research direction.

The studies involving human participants were reviewed and approved by Ethics Committee of Shengjing Hospital of China Medical University. The patients/participants provided their written informed consent to participate in this study.

YL: substantial contributions to the conception and design of the work and wrote this paper. HT, YY, and YZ: they did some work about the acquisition, analysis or interpretation of data. LX: provided us a favorable research environment.

Copyright © 2020 Liu, Tan, Yu, Zeng and Xiao. This is an open-access article distributed under the terms of the Creative Commons Attribution License (CC BY). The use, distribution or reproduction in other forums is permitted, provided the original author(s) and the copyright owner(s) are credited and that the original publication in this journal is cited, in accordance with accepted academic practice. No use, distribution or reproduction is permitted which does not comply with these terms.