Methods: The present multi-center, cross-sectional, case-control study evaluated the severity of depression and anxiety with the Beck Depression Inventory (BDI) and Beck Anxiety Inventory (BAI), respectively; the frequency of neuropsychiatric disorders with the Korean-Mini International Neuropsychiatry Interview; and QoL with the Short-Form 36 (SF-36).

Results: Seventy-four subjects participated in this study (IFD, 27; ET, 24; controls, 23). The BDI and BAI scores were higher in the IFD and ET groups than in the control group. Although the frequency of neuropsychiatric disorders diagnosed according to the Diagnostic and Statistical Manual of Mental Disorders, 4th Edition Axis I was comparable among the groups, the prevalence of major depressive disorder tended to be high among patients with IFD. QoL was correlated with the severity of depression and anxiety across the groups.

Dystonia has traditionally been classified as a movement disorder, caused by dysfunction in the motor system, particularly the basal ganglia (BG) (1, 2). As the BG are connected to the limbic system, its dysfunction induces consequent non-motor neuropsychiatric symptoms in patients with dystonia (3–5). Indeed, recent studies have shown that such neuropsychiatric manifestations, including depression, anxiety, and obsessive-compulsive traits, are observed in patients with focal or segmental dystonia (6–15). The recent finding that patients with essential tremor (ET), a common motor characterized dysfunction of the cerebellum and consequent isolated tremor, also present with neuropsychiatric symptoms, may implicate psychiatric manifestations as part of the primary pathophysiology of movement disorders (3, 16–20).

The present study recruited patients with IFD, patients with ET, and age-matched, healthy controls without any neurological deficits. The sample sizes obtained using a power analysis were 43, 43, and 22 for patients with IFD, patients with ET, and controls, respectively. Diagnoses of IFD and ET were confirmed according to the Movement Disorder Society diagnostic criteria (23, 24). Specifically, among patients with ET, only those with tremor in both arms and without head tremor were enrolled to avoid the inclusion of patients with dystonic tremor. We excluded patients who presented with movement disorders other than dystonia or tremor or had a history of drug exposure to which the movement disorder could possibly be ascribed. None of the study subjects had been diagnosed with any psychiatric disorder, and all participants provided written informed consent prior to their enrollment in the study.

All participants were interviewed to evaluate the severity of their depression and anxiety using the Beck Depression Inventory (BDI) and Beck Anxiety Inventory (BAI), respectively (25, 26). They were also asked to undergo the Korean-Mini International Neuropsychiatry Interview (MINI). MINI is a brief, reliable structured interview used for diagnosing Axis I psychiatric disorders according to the Diagnostic and Statistical Manual of Mental Disorders, 4th Edition (DSM-IV) (27). The cognitive function of all participants was tested with the Korean-Mini Mental Status Examination (K-MMSE). The health-related QoL of participants was evaluated with the 36-Item Short-Form Health Survey (SF-36) (28). The Burke-Fan-Marsden Dystonia Rating Scale (BFMDRS) was used to evaluate the severity of dystonia in patients with IFD (29).

The Kolmogorov-Smirnov and Shapiro-Wilk tests were used to test the normality of the variables; we found that the variables analyzed by analysis of variance did not follow a normal distribution. Accordingly, The Kruskal-Wallis H and Mann-Whitney post-hoc tests were used to compare parameters, including BDI, BAI, SF-36, K-MMSE, and age, among the three groups. The chi-square test was used to compare the frequency of psychiatric disorders between groups. Linear regression was performed to determine the correlation between the severity of non-motor scores, including BDI and BAI, and scores of SF-36. The correlation between BFMDRS and scores of SF-36 was also analyzed using linear regression. Data are expressed as mean ± SD, and p < 0.05 were considered to indicate statistical significance. The data were analyzed using SPSS 25.0 statistical software (IBM Corp., Armonk, NY, USA). 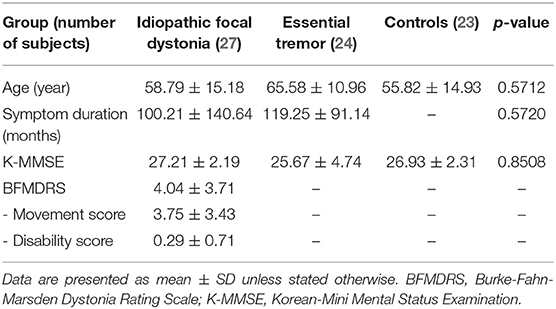 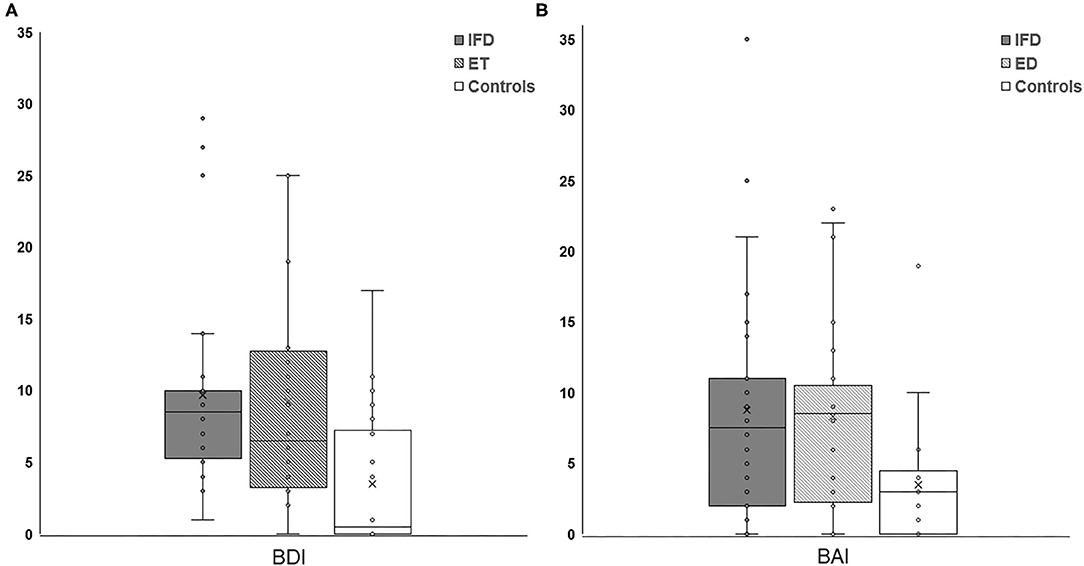 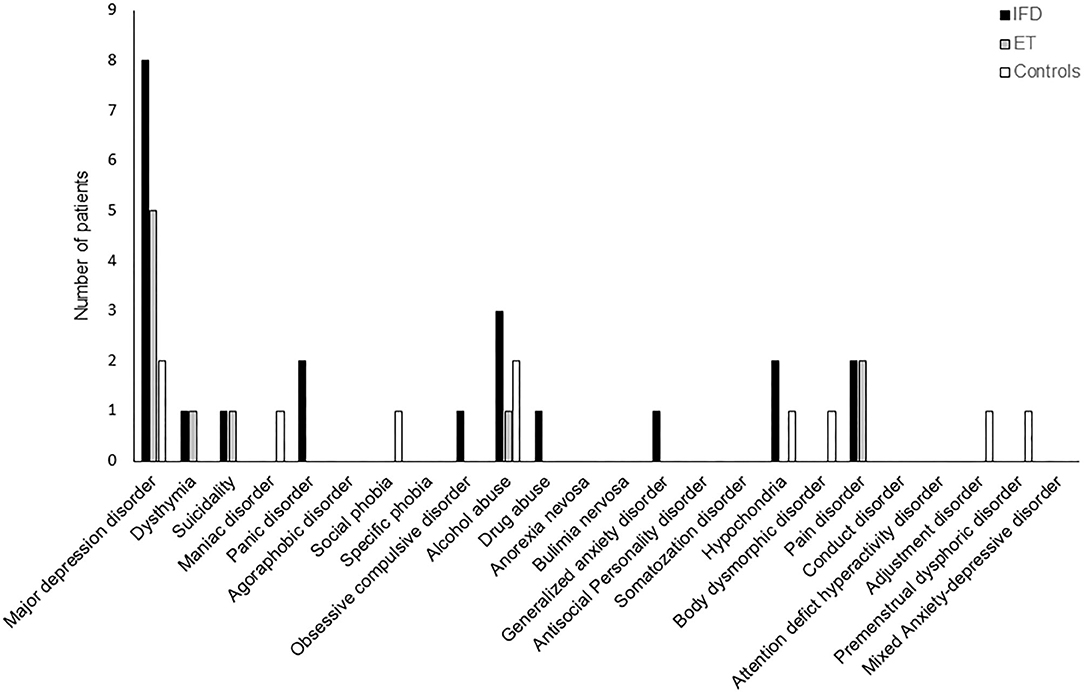 Figure 2. The frequency of DSM-IV Axis I neuropsychiatric disorders among individuals with IFD and ET and controls. The overall frequency was comparable among the groups, but the incidence of major depressive disorder tended to be higher in patients with IFD.

Our results replicate previous findings of a relatively higher prevalence and severity of anxiety and depression among patients with idiopathic dystonia or ET than in healthy controls (6, 8, 9, 11, 13–16, 18–20, 30). Although our study did not find a significant difference between the study groups in terms of the frequency of psychiatric disorders diagnosed according to the DSM-IV Axis I (p = 0.11), psychiatric disorders tended to be more prevalent among patients with IFD than among healthy controls. Along with higher depression and anxiety scores, the frequency of major depressive disorder tended to be higher in patients with IFD (8, 2, and 2 in IFD, ET, and healthy controls, respectively); however, on account of our limited sample size, statistical significance could not be confirmed.

The frequency with which Parkinson's disease (PD) induces depression and anxiety can be ascribed to the spread of neurodegeneration beyond the BG (31, 32), which is the key neural substrate of PD. Although dystonia is a movement disorder related to the BG, neuropsychiatric manifestations in dystonia have been overlooked because of the lack of a specific structural pathology in this condition (33, 34). Since sensory dysfunction was introduced in this motor system disorder (35, 36), other neuropsychiatric manifestations have been highlighted as features of dystonia, particularly in the past decade (10–15). Furthermore, emerging evidence suggests that dystonia results from dysfunctional brain networks (37, 38). According to this hypothesis, the neuropsychiatric manifestations of dystonia can be considered primary consequences of the disrupted connection between the limbic and BG-motor symptoms in dystonia (7, 33, 39). ET could cause mood disorders and psychiatric symptoms by this same mechanism (4). Indeed, cross-sectional and longitudinal studies have reported an association between ET and non-motor symptoms (18). When ET is considered a neurodegenerative disorder such as PD, neuropsychiatric manifestations can be regarded as a consequence of pathological spread beyond the cerebellum, resulting in various symptoms besides tremor (40). On the other hand, the cerebellum is linked to the BG, and this thus provides a mechanism by which dysfunction of the cerebellum could affect the BG circuit (41). The disruption within the brain network could affect the function of remote regions connected with the cerebellum resulting in various symptoms other than tremor. Taken together, dysfunction in multiple nodes in the limbic system connecting the BG to the cerebellum may lead to the development of non-motor neuropsychiatric symptoms in patients with movement disorders. Future studies should use electrophysiological and neuroimaging methods to detect dysfunction in the brain network. This will elucidate the mechanisms of depression and anxiety in patients with IFD and ET. This may result in an alternative explanation to the one that states that depression and anxiety occur in patients with IFD and ET as a primary phenomenon due to disease-related disruption of neural networks. Considering that depression and anxiety are more common in patients with chronic illnesses and that the patients in our study had had IFD and ET for more than 100 months, the increased severity of depression and anxiety could be considered a secondary phenomenon due to the presence of a chronic condition (42, 43). Comparison of non-motor neuropsychiatric symptoms between de novo patients and healthy controls may clarify whether these symptoms have a direct relationship with the pathophysiology of IFD and ET. In our study, the severity of depression and anxiety as well as the frequency of Axis I psychiatric disorders were comparable between patients with IFD and ET, suggesting that the neuropsychiatric symptoms due to IFD and ET may share a pathophysiology attributable to dysfunctional neural networks.

We observed a significantly worse QoL in the IFD and ET groups than in the control group and a correlation between QoL and both anxiety and depression across all three groups. Interestingly, in patients with IFD, the QoL was correlated with anxiety and depression, but not with the severity of dystonia. It suggests that the QoL in patients with IFD may be more affected by neuropsychiatric symptoms than motor symptoms due to dystonia itself.

This study was subject to several limitations. First, we could not recruit the optimal number of patients that was initially calculated in the power analysis. Accordingly, the results of this study should be considered preliminary. Larger studies are required to compare the presentation of neuropsychiatric symptoms across patients with different movement disorders to elucidate their exact pathophysiology. Second, unfortunately, we did not measure tremor scale to determine the tremor severity in patients with ET. Consequently, we could not evaluate the potential correlations between motor symptoms and depression and anxiety or QoL in patients with ET. Third, although MINI is useful as a tool for the assessment of psychiatric disorders, it would not be an optimal tool designed to specifically evaluate neuropsychiatric symptoms resulting from neurological and movement disorders.

Anonymous data related to this article will be provided by the corresponding author on reasonable request.

The studies involving human participants were reviewed and approved by the Institutional Review Boards of Chung-Ang University Hospital (C2013231-1191) and Asan Medical Center (2014-0149). The patients/participants provided their written informed consent to participate in this study.

This study was supported by research grant from Samil Pharmaceutical Co., Ltd. The funders had no role in the study design, data collection and analysis, decision to publish, or preparation of the manuscript.

Copyright © 2020 Lee, Chung and Shin. This is an open-access article distributed under the terms of the Creative Commons Attribution License (CC BY). The use, distribution or reproduction in other forums is permitted, provided the original author(s) and the copyright owner(s) are credited and that the original publication in this journal is cited, in accordance with accepted academic practice. No use, distribution or reproduction is permitted which does not comply with these terms.