Division of Gastroenterology and Hepatology, University of Michigan, United States

Background/Aims: Functional anorectal pain (FARP) is a functional gastrointestinal disease, which belongs to chronic pelvic floor pain. The mechanisms of its development are not fully understood. We designed this experiment to evaluate the characteristics of rectal sensory evoked potential (RSEP) and anorectal manometry (ARM) in this population, so as to explore the pathophysiology of FARP.

Methods: The rectal sensory evoked potentials (RSEP) and anorectal manometry (ARM) were performed in 23 patients with FARP and 23 healthy controls. The correlation between the two measurements was investigated.

The pathophysiology of FARP is still unclear. At present, it is generally believed that the over contraction and high tension of pelvic floor muscle are one of the important mechanisms. Levator ani syndrome is considered to be closely related to pelvic floor spasm and can usually be relieved by the biofeedback therapy (6, 7). Rao SS et al. reported that paroxysmal anal hyperkinesis was an outstanding characteristic feature of proctalgia fugax (8). However, in our clinical practice, we have observed that functional anorectal pain is also present in patients with hypotensive pelvic floor muscle, and this group of patients usually have sensation of downward bloating in their anus, and most of them are women.

Abnormal regulation of the nervous system may also lead to FARP. The function of gastrointestinal tract is controlled by the central nervous system, autonomic nervous system, and enteric nervous system. There is a biphasic regulatory pathway between the digestive tract and the central nervous system (9); the brain-gut dysfunction has been proven to be closely related to gastrointestinal disorders (3, 10, 11). The visceral sensory function is one of the important contents in the brain-gut axis research, and heightened visceral perception or visceral hypersensitivity has long been considered as a potential pathogenesis of functional bowel disease (12, 13), especially IBS (14, 15). The mechanism of visceral hypersensitivity has not been fully elucidated. It may be result from the sensitization of nerve afferent pathways originating from the gastrointestinal tract (16). At present, there is a lack of reports in the literature on the sensory abnormality in patients with functional anorectal pain.

Neurophysiological tests can provide useful information regarding the integrity of neuronal innervation and neuromuscular function of the gut. During the last few years, some techniques have provide information regarding gut-brain communication such as Positron Emission Tomography (PET) or functional magnetic resonance imaging (fMRI). Recently, RSEP has been introduced as a new technique that can provide an quantifiable method to evaluate the connections between the afferent tracts, spinal cord, and the cerebral cortex (9). In this study, our aim was to prospectively evaluate and compare RSEP following rectal electrical stimulation and ARM in FARP patients, and healthy controls. So as to evaluate the anorectal sensory and motor functions and neural afferent pathways in FARP patients, and explore possible mechanisms of FARP.

In order to exclude the influence of age and gender, the control group consisted of 23 healthy people whose sex and age matched with the patients. These healthy people did not have FARP and diseases listed below: gastrointestinal diseases, severe perianal diseases, or severe cardiovascular. Individuals with any cerebrovascular, urological, gynecological, orthopedic, or malignant tumors were also excluded.

For rectal stimulation, a St. Mark's stimulation electrode was fixed at the tip on the index finger while the other electrode was located at the root of the index finger, and the electrodes were connected to an electrical stimulator (Oxford Instruments, Oxford, Britain). For recording of evoked potential, an active electrode was placed on the subject's central scalp (Cz); a reference electrode was placed on the forehead (Fz); and a grounding electrode was placed on the ankle. This was in accordance with the International Electroencephalogram Society standard (17). The test was conducted in a dark room, unnecessary electrical equipment were turned off to avoid electromagnetic interferences. Subjects were requested to lie relaxed with their eyes closed. The examiner put the index finger into the rectum of the patient with the stimulation electrode located at 9 o'clock of the lithotomy position and 5 cm from the anal margin. The sensory threshold was defined as the minimum stimulation intensity of the patient's perception, and the tolerance threshold was defined as the maximum tolerable intensity. The final stimulus intensity was set at 75% of the mean tolerance threshold. The evaluation was repeated three times to ensure consistency. The electric stimuli were composed of 100 pulses with a pulse width of 0.2 ms, frequency of 1 Hz. The impedance between the electrodes was maintained below 5 kΩ. The RSEP data were obtained using the Oxford myoelectricity-evoked potential apparatus (Oxford Instruments, Oxford, Britain). The sensitivity of the amplifier was 100 μv/div and the recording bandwidth was set to 1~500 Hz. 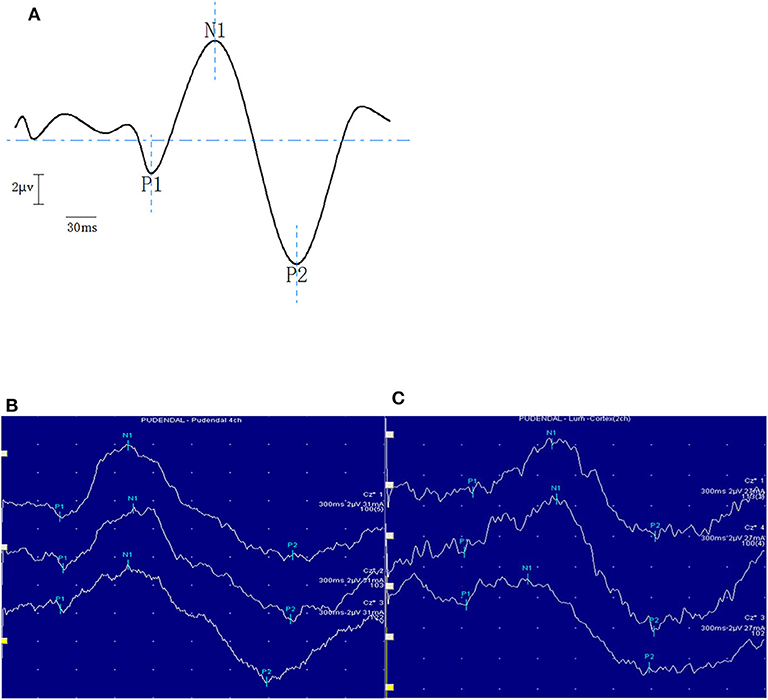 Figure 1. The panel above is the schematic diagram of typical waveforms of RSEP (A). The bottom panel shows typical examples of RSEP responses in a healthy subject (B) and in a patient with FARP (C).

SPSS 20.0 version was used for statistical analyses. The data are expressed as mean ± standard deviation with 95% confidence interval. Counting data is expressed by frequencies and percentages, Fisher's exact tests is used for comparison between groups. The Mann Whitney U-test was used to compare the latency and amplitude of RSEP waves, and parameters of anorectal manometry between the FARP patients and healthy controls. The correlations between the parameters of RSEP and the parameters of anorectal manometry were analyzed by Pearson or Spearman correlation analysis. 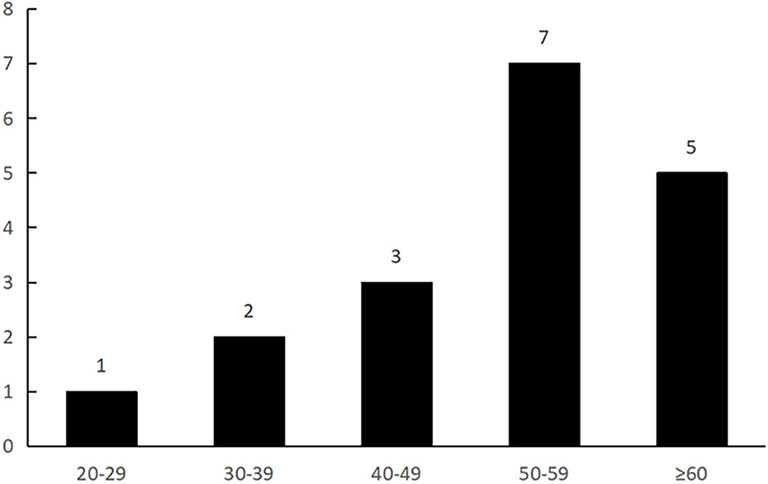 Figure 2. This figure shows that most of the female FARP patients were over 40 years old, and mainly distributed in the age group of 50–59 years old.

A reproducible RSEP pattern was recorded in all subjects after rectal stimulation. Typical examples of the morphology of RSEP response are shown in Figures 1B,C. The latencies and amplitudes of each component of the RSEP of control group are shown in Table 2, and there were no differences among RSEP components between men and women subjects.

Table 2. Latencies and amplitude of each component of the RSEP response following Rectal Stimulation in healthy controls.

Table 3. Latencies and amplitude of each component of the RSEP response following Rectal Stimulation in patients.

Table 5. The data of 15 FARP patients who completed the two examinations.

In terms of the rectal sensory function, rectal maximum tolerable volume was reduced in the FARP patients in comparison with the healthy controls (121.33 ± 48.24 vs. 185.22 ± 45.61, P < 0.01).There was no significant difference between the two groups in first sensation threshold or the urge to defecate threshold (Table 4).

The Correlation Between RSEP and Anorectal Manometry 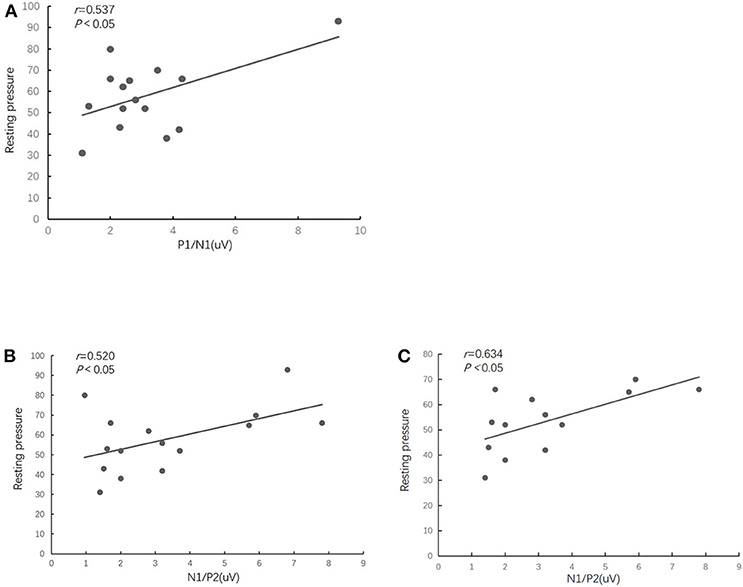 Chronic anorectal pain is a refractory functional gastrointestinal disease. The Rome Classification provides well-defined diagnostic criteria for functional anorectal pain. However, it is still unclear of the pathophysiology of FARP and a huge challenge to treat FARP, though some advances in the treatment of functional anorectal pain have made recently (21–24). The pathophysiology of functional gastrointestinal diseases is closely related to the neuronal interactions between the brain and gut. RSEP provided objective data regarding the integrity of the afferent pathways. In this study, we found that latency of P1 of RSEP in the FARP patients were significantly longer and the amplitude of each waves were significantly decreased when compared to healthy controls.

Somatosensory EPs (SEPs) has advantages over other brain imaging techniques given its relative portability, inexpensiveness, availability. It can be used to evaluate the somatosensory pathway at the peripheral, spinal, cortical, and subcortical level (16). By stimulating the rectum and recording the potential changes of neurons in the cerebral cortex one can investigate the nerve transfer function from the rectum to the pelvic floor nerve and then to the spinal cord and the cerebral cortex. RSEP has been carried out in healthy people (29) and the fluctuation range of the data in the healthy control group in our study was basically the same as the above study. The RSEP has been widely used to evaluate the visceral sensitivity mechanism in IBS. Chan et al. found that compared to healthy subjects, irritable bowel syndrome patients demonstrated higher prevalence of cerebral evoked potential early peaks postprandially, and uniformly shorter cerebral evoked potential latencies both before and after feeding (30). Conversely, the prolongation of SEP latency has been reported in fecal incontinence and constipation (31, 32). This is thought to be related to receptor dysfunction, reduced activation of afferent nerves, or slowed peripheral nerve conduction (28). In our study, the FARP patients showed a longer latency of P1 in the RSEP. This finding once again demonstrated the impairment of the afferent pathway in FARP. The mechanism might be similar to fecal incontinence and constipation.

The RAIR is a phenomenon in which the anal internal sphincter is temporarily relaxed due to the transient distension of the rectum. It plays an important role in bowel control and defecation (36). Studies have shown that the presence of RAIR is unrelated to the integrity of spinal cord and brain nerve centers, but requires a complete intramural pathway (37). Beuret-blanquart et al. have shown that the RAIR reflex appears to be controlled by autonomic neural pathways, especially the parasympathetic nervous system (38, 39). In our study, RAIR was present in 15 FARP patients after ARM, although FARP patients need larger volumes to elicit RAIR, which may indicate the integrity of intramural pathway in these patients. The difference in eliciting volume may be related to rectal compliance and sensory function abnormalities.

The limitations of our study include the small sample size and a comparative study among different subtypes could not be performed. Also, in this study, we didn't evaluat efferent pathways in FARP patients, and also deserves further study.

In conclusion, rectal sensory evoked potential is safe and well-tolerated and appears to be a useful technique for the detection of neuropathy, the test can provide an objective evidence for neuropathy and a new dimension toward our understanding of the mechanisms of FARP.

The studies involving human participants were reviewed and approved by Ethics Committee of Nanjing Hospital of Chinese Medicine. The patients/participants provided their written informed consent to participate in this study.

MN and BJ conceived and designed research. QiZ and YL conducted research and wrote the initial paper. QioZ, YZ, and SW collected date. MN revised the paper and had primary responsibility for final content. All authors read and approved the final manuscript.

Copyright © 2020 Zhang, Liu, Zhang, Zhang, Wu, Jiang and Ni. This is an open-access article distributed under the terms of the Creative Commons Attribution License (CC BY). The use, distribution or reproduction in other forums is permitted, provided the original author(s) and the copyright owner(s) are credited and that the original publication in this journal is cited, in accordance with accepted academic practice. No use, distribution or reproduction is permitted which does not comply with these terms.

Translational Side of Emerging Invasive and Non-Invasive Stimulation Therapies, Volume I