Method: A total of 14 older persons (aged ≧ 60) were randomly allocated to the exergame (EG) and active control (ACG) groups. EG performed exercises with 2D exergames, while the ACG used the same movements as the EG, but without the use of virtual reality. Spatial navigation was assessed through the Floor Maze Test, where the immediate maze time (IMT) and delayed maze time (DMT) were recorded.

Results: Spatial navigation was enhanced in EG participants compared to ACG individuals. A significant (p = 0.01) IMT reduction between groups was observed, while DMT time without prior planning was significantly different at the significance threshold (p = 0.07).

The development of chronic diseases in older persons is common, harming their functional capacity and resulting in loss of autonomy (1). Independence reduction is the main reason why older persons dwell in long-term care institutions (LTCIs) (2).

In Brazil, over half of institutionalized older persons have dementia (3), which may occur after institutionalization (4). Spatial navigation is among the cognitive functions that deteriorate in dementia cases and compromises the older person's ability of locomotion (5), which in turn is associated with prodromal dementia (6). Spatial navigation is defined as the ability to integrate cognitive processes and sensorial systems, especially the visual system, into environment data processing and body positioning during spatial displacement (5).

An interesting method used to stimulate spatial navigation ability is immersive virtual reality-based navigation training (VR) (7), which involves the activation of brain zones associated with cognitive processes, such as the hippocampus, caudate nucleus, and frontal cortex (8). However, the use of VR immersive systems is complex and expensive, and difficult to apply in older persons living in LTCIs. Previous studies have indicated that active video games associating two-dimensional virtual environment digital games with physical exercise (2D exergames) improve short-term memory, executive functions, sensorimotor integration, and mobility in older individuals (9, 10). To date, however, no robust evidence that 2D exergames might alter spatial navigation in older individuals is available. In this context, this study aimed to analyze the effect of 2D exergame training on the spatial navigation in institutionalized non-robust older individuals.

The sample was comprised of older persons inhabiting four LTCIs in the Brazilian cities of Montes Claros/MG and Rio de Janeiro/RJ. Both men and women were recruited, aged 60+, totaling 186 eligible participants. The inclusion criteria were as follows: (a) Preserved capacity to communicate with others. (b) absence of medical diagnosis of neurodegenerative diseases or any other disease that may hinder exercise performance; (c) capacity to perform exercise, according to each LTCI physician; (d) no record of severe cardiopathy; (e) absence of acute musculoskeletal injuries that may hamper exercise performance; and (f) no severe sequels of cerebrovascular accident. Participant demographic data was analyzed, and the Brazilian version of the Mini-Mental State Examination (MMSE) was applied (11). NO MMSE cut-off point was applied to exclude participants.

Randomization was applied with the division of parallel groups according to similar age. An independent researcher performed the procedure and used an Excel sequence of random numbers, with no participant identification. The codes of each older person's group allocation were sent to the data collection chief researcher to determine the intervention groups.

Interventions were performed twice a week, totaling 16 sessions across approximately 2 months. Each session lasted 30–45 min. Participants were randomly allocated to the exergames and active control groups (EG and ACG, respectively). The EG performed exercises with 2D exergames, while the ACG used the same movements as EG without virtual reality. Both intervention programs have been previously published and detailed by our laboratory (13, 14). The frequency, number of sessions, and duration were the same for both groups.

The Floor Maze Test - FMT (15) was used to assess spatial navigation. This test evaluates planning, allocentric spatial navigation, and episodic memory. FMT consists of a bidimensional white maze drawn in a dark blue carpet (6 m2). Participants must find the exit of the maze as quickly as possible. Course planning time (PT), immediate course performance maze time (IMT), and maze course repetition time without previous planning (Delayed Maze Time - DMT) were assessed. To perform the DMT, the individual remained in a room for 10 min without visual contact with the maze. IMT and DMT trajectory errors were recorded.

The Shapiro-Wilk and Levene tests were used to verify data normality and homoscedasticity, respectively. Descriptive analyses (mean, standard-deviation, median, and 95% confidence interval) were used for sample characterization and result presentation. Differences between post- and pre-intervention data (Δ) were estimated using the spatial navigation results. The independent T test and Kruskal-Wallis were used, when suitable, to compare independent group data (EG Δ vs. ACG Δ). Analyses considered α ≤ 0.05 and β = 0.20 parameters and were performed using the Statistics Package for Social Sciences (SPSS) 24.0. As the multiple comparisons inflate the alpha value, we did not perform paired analyses (within groups), to avoid Type I Errors [See (16)].

This research was approved by the Research Ethics Committee of the State University of Montes Claros under n. 2.398.863/2017. Brazilian Ministry of Health rules were met, according to law n. 466/2012.

From the 186 eligible older persons, 14 were selected for the interventions, as all remained in the study until the end (Figure 1). Groups presented homogeneity regarding age, body weight, height, and global cognition (Table 1). All older persons exhibited frailty criteria, with 12 classified as frailty and two as prefrail. 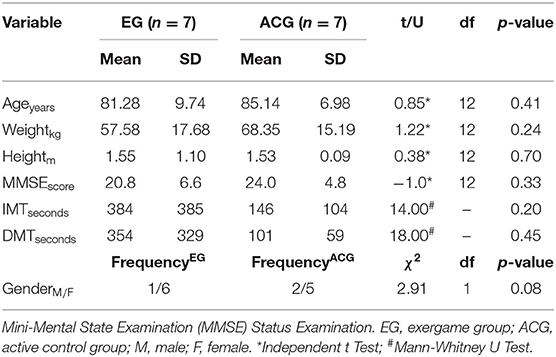 Spatial navigation improved in EG participants compared to ACG individuals. A significant reduction in IMT performance time was observed between groups (Figure 2A), while the time to perform DMT was significantly different at the significance threshold (Figure 2B).

This study indicates that exercise with 2D virtual reality reduces immediate FMT performance time and improves spatial navigation in institutionalized non-robust older persons. These are promising findings regarding spatial navigation decline and speed reduction, which is a predictor of cognitive decline due to dementia disorders (6).

Spatial navigation is considered among the scientific community as a strong predictor of both cognitive impairment and Alzheimer's disease (6, 17, 18). Immediate FMT performance time is associated with executive functions and involves, mainly, planning, mental flexibility, and processing speed (14), functions which might be harmed in dementia cases and are paramount to maintaining independence and postponing institutionalization (4, 17, 19).

The main physical exercise benefits on cognition are associated with neuroplasticity, spatial learning, memory, and executive control (20–23). These benefits justify the improvement of spatial navigation ability found in the present study. Moreover, exercise with virtual reality distinguishes itself as a more attractive strategy for physical exercise practices in older individuals (24).

Other studies corroborating our findings are available, highlighting that the use of training with virtual reality improves the cognitive capacity of institutionalized older persons (10, 12, 13, 24–26). Interactions with virtual environments increase the activation of the frontoparietal cortex network, which contributes to explaining the findings reported herein, as this region is directly connected to spatial navigation (27). Furthermore, a lack of investigation on longitudinal intervention strategies on humans focusing on spatial navigation, as the one conducted in this study, is noted, as most assessments consider only acute effects.

Some studies conducted with animals have highlighted that aerobic and resistance physical exercise may result in positive interferences on brain structures associated with spatial navigation, such as the hippocampus, through the enhancement of trophic factor secretion, brain derived neurotrophic factor (BDNF), and growth factor similar to insulin type 1 (IGF-1), which promote neurogenesis (22, 28).

The most important and main limitation of this study is the sample size. Although p-value and statistical power were statistically significant, this finding should be interpreted with caution, as a replication of the experiment applied herein is required.

Exercise with 2D virtual reality improves the spatial navigation ability of institutionalized, non-robust, older persons. The results reported herein may aid in developing strategies to improve spatial navigation capacity in institutionalized older persons and, therefore, prevent or slow down the development of prodromal dementia in this population.

Copyright © 2021 Oliveira, Evangelista e Souza, Alves, Carneiro, Fagundes, de Paula, Engedal, Nascimento and Monteiro-Junior. This is an open-access article distributed under the terms of the Creative Commons Attribution License (CC BY). The use, distribution or reproduction in other forums is permitted, provided the original author(s) and the copyright owner(s) are credited and that the original publication in this journal is cited, in accordance with accepted academic practice. No use, distribution or reproduction is permitted which does not comply with these terms.