Migraine-like headache, or symptomatic migraine, has often been reported to be caused by pathological alterations affecting migraine pain-related structures of the brain, such as brainstem and cerebral hemisphere (1–3). Although migraine has long been accepted to be a brain hyperexcitability disease (4), brain vascular alterations are continually reported to be causative factors for the onset of recurrent headaches meeting the diagnostic criteria of migraine by presentation. For example, moyamoya disease has been recognized to be the cause of migraine-like headaches for long time (5), and carotid-cavernous fistula and dissections of intracranial and cervical arteries are reported to be the cause of migraine-like headaches (6, 7). Another form of brain vascular alteration, cervical, anterior, and middle cerebral artery aneurysm, is also demonstrated to be associated with increased prevalence of migraine headaches with or without aura (8), and surgical treatment with either coil embolization or clipping relieved the recurrent headaches (9–11), indicating that cranial aneurysm is a causative factor of migraine. Posterior cerebral artery (PCA) aneurysm is a rare condition, and its association with migraine is rarely reported. Here, we report on a patient with PCA aneurysm who developed migraine-like headaches with visual aura after endovascular coiling treatment. To the best of our knowledge, this is the first report that a treatment with endovascular coiling of a PCA aneurysm initiated a migraine-like headache with visual aura.

A 31-year-old woman came to our department with an abrupt and severe headache for half a day. At the time of admission, her Fisher scale was on grade 2 and the Hunt and Hess scale was on grade 1. She had no motor or sensory deficit but had signs of meningeal irritation. There was no history of trauma, hypertension, diabetes, or other disease. Computed tomography (CT) of the brain was conducted immediately and showed a subarachnoid hemorrhage (SAH) (Figures 1A,B). Thus, the patient was diagnosed with SAH and accepted regular treatment with intravenous mannitol and nimodipine, and the headache was greatly relieved. Seven days after headache symptom onset, the patient underwent digital subtraction angiography (DSA) examination under general anesthesia, and the result showed the presence of an aneurysm of the left PCA at the P1-P2 segments, measuring 4 × 5 mm with a neck of 1.5 mm (Figures 1C,D). Then, the patient underwent stent-assisted coil embolization of the aneurysm (Figures 1E,F). Stent-assisted coil embolization did not cause any neurological complication, and the patient's headache disappeared gradually within days postembolization. One week after coil embolization was conducted, brain CT examination was reperformed, and the result showed no abnormality in brain parenchyma. The patient was discharged and required to continue treatment with oral antiplatelet agents aspirin (100 mg/day) and clopidogrel (75 mg/day), which started the day after endovascular coiling treatment. 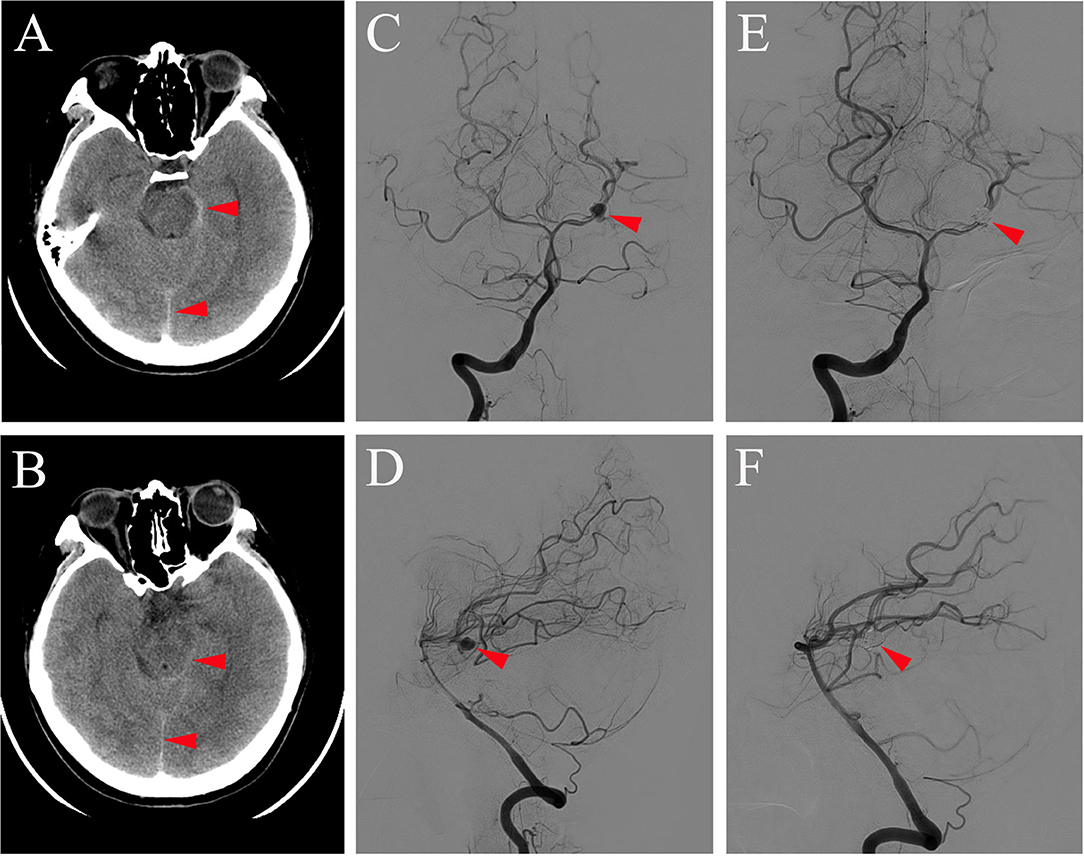 One month after endovascular therapy, aspirin, and clopidogrel were abandoned by the patient due to gingival bleeding and skin ecchymosis. On the day the antiplatelet agents were halted, the patient presented with transient visual disturbances characterized by spotted flashes around the bilateral visual field and a water ripple-like image stemming from the center of the bilateral visual field and spreading around. This visual disturbance lasted for 7–8 min and was then succeeded by severe right-sided throbbing headache lasting for about 2–3 h. The headache was accompanied with nausea, vomiting, and photophobia and aggravated by head movement. Head CT was performed immediately showing no localized hemorrhage or ischemic lesions (Figures 2A,B). The patient was underwent DSA examination again, showing that the coil was stable and there was no in situ thrombus (Figures 2C,D). From then on, she experienced episodic visual disturbance and headache attacks similar to the episode on the day the antiplatelet agents were halted every month with a frequency of two times a month. Each episode of headache would last 2–3 h. The headache was moderate to severe in severity and throbbing and pressure-like in character. Photophobia and nausea accompanied when the headache was severe. Before this event, she had neither a personal nor familial history of recurrent headaches. This recurrent event was considered to be either migraine with aura or epilepsy, and an electroencephalography (EEG) examination was conducted. The EEG showed epileptic discharges in the left occipital and temporal areas. A treatment with sodium valproate 500 mg twice a day was chosen for the patient as sodium valproate can usually effectively and prophylatically treat either migraine or epilepsy. The episodic visual aura and succedent headache were still recurring twice or even more times a month during the 3 months of sodium valproate treatment, but the headache severity seemed reduced. Sixteen months after endovascular coiling treatment, the patient accepted EEG examination again in our department, and spike-and-slow wave complexes could be detected in the left occipital and temporal areas (Figure 3A). The patient reaccepted antiplatelet treatment with clopidogrel (75 mg/day), omitting valproate and aspirin, and her migraine-like headache with visual aura relieved during the 4 months of follow up. One month after the readministration with clopidogrel, EEG was reconducted, and neither epileptiform discharges nor asymmetric background activity was observed (Figure 3B). 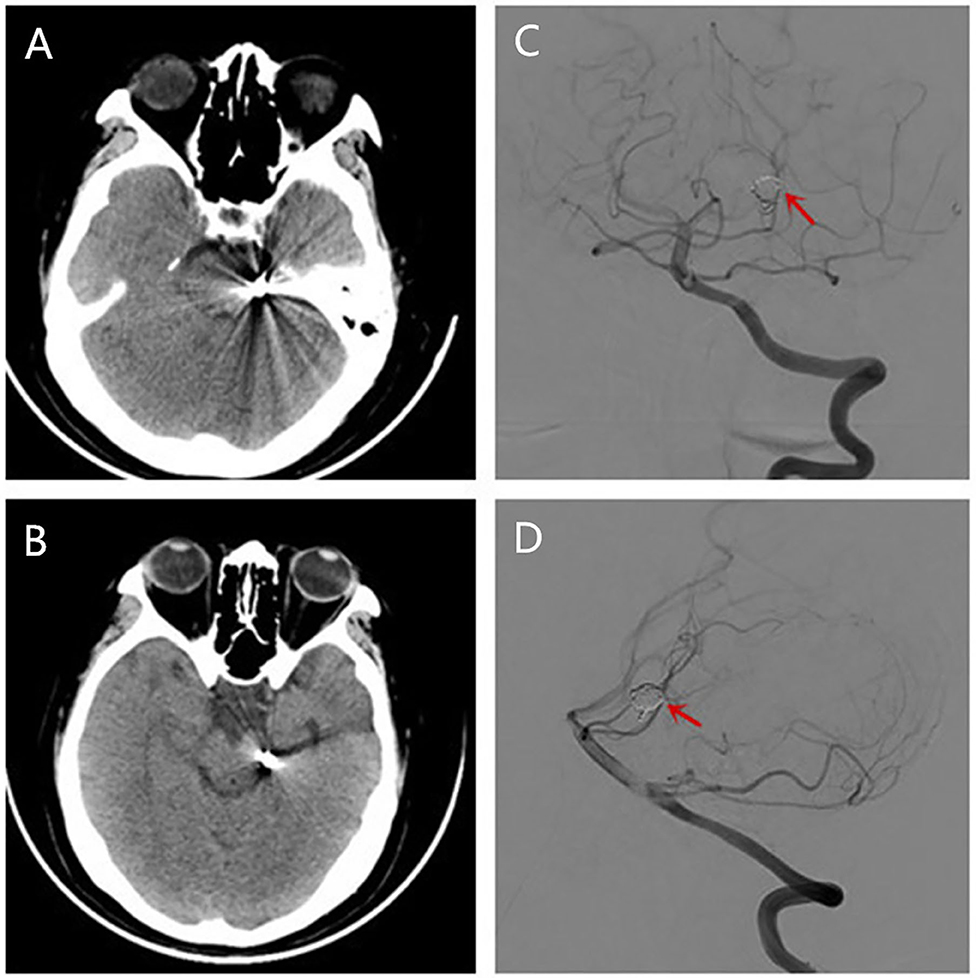 Figure 2. Brain CT (A,B) conducted showing no localized hemorrhage or ischemic lesions after she had a migraine-like headache. Reexamination of DSA showing the coil was stable and there was no in situ thrombus (C,D). 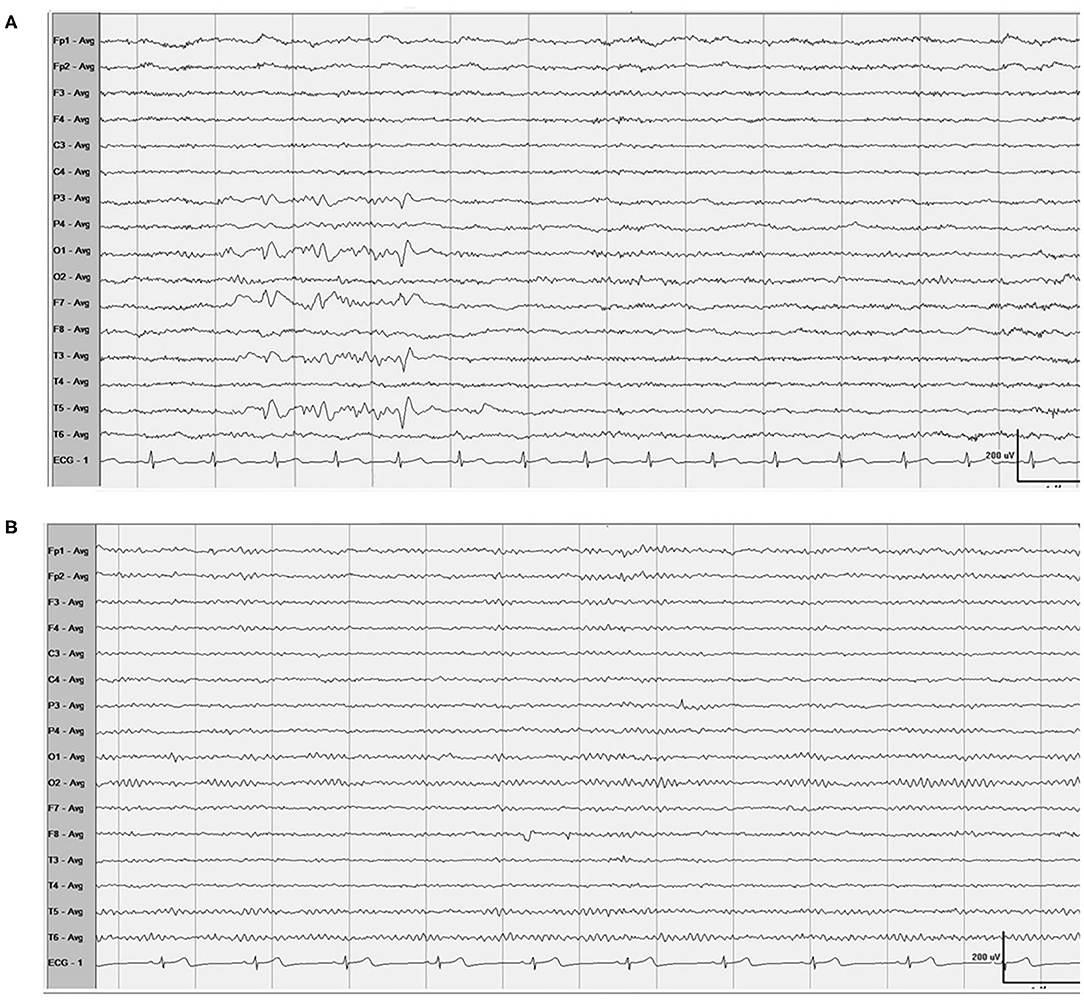 Figure 3. EEG (A) Showed spike-and-slow wave complexes in the left occipital and temporal areas, and 1 month after the readministration with clopidogrel, EEG (B) showed normal. 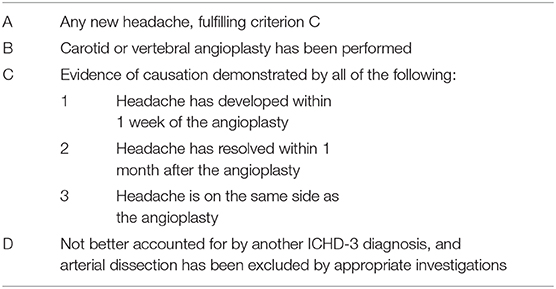 A higher prevalence of migraine headaches with or without aura in patients with cranial aneurysm (8) and improvement of the preexisting migraine headache after endovascular treatment with either coiling or clipping (17) indicate that cranial aneurysm is a causative factor for migraine. Cranial aneurysms may be saccular, fusiform, or dissecting and can be located at various segments of the cranial artery. Most of the literature reports that migraine-associated aneurysms are saccular in shape. Cranial dissecting aneurysm is very rarely associated with migraine; there is one report showing that a dissecting aneurysm on MCA initiated migraine-like headache (18), another report showing that a dissecting aneurysm on PCA initiated migraine-like headache with visual defect (19), and a few reports showing that dissecting aneurysm on vertebral or anterior artery are closely associated with the onset of headache but not a type of migraine (20–22). These literature reports show that cranial aneurysm is either a causative or a facilitating factor for migraine attacks. Our patient had new onset of migraine-like headaches after endovascular treatment for aneurysm, indicating that the headaches were caused by the endovascular treatment but not by the aneurysm. Our case seems in disagreement with that of the literature reports.

In our patient, the aneurysm was located on the segment of PCA that supplies part of the temporal cortex, the calcarine, and the occipital cortex as well as parts of the brainstem and thalamus. The phenomenon that antiplatelet treatment caused an abortion of recurrent migraine-like headaches in our case indicates that the occurrence of migraine-like headache was associated with the stenting coil equipment. Thus, it might be proposed that microemboli generated from the coiling equipment migrated along the PCA into the occipital area, causing the visual aura and subsequent headache. This speculation is supported by an animal study in which microemboli were generated from the patent foramen ovale (PFO) and moved to the brain cortex and induced cortical spreading depression (CSD), the presumed basis of migraine aura and headache in patients with PFO (23). This is supported by a case report in which microembolic signals under transcranial doppler monitoring were repeatedly observed in the basilar artery, and the microembolic signals together with the migraine with aura symptoms disappeared simultaneously with removal of the PCA pseudoaneurysm (24). This microembolus-induced CSD is proposed to be the underlying pathophysiological mechanism of the association between migraine and many cardiac diseases, such as atrial fibrillation (25), cardiac myxoma, PFO, atrial septal defect (ASD), atrial septal aneurysm, mitral valve prolapse, and congenital heart disease (26). The preventive effect of the antiplatelet on migraine-like headache with visual aura caused by coiling in our patient is consistent with the prophylactic role of aspirin and clopidogrel, ticagrelor in some migraine patients with PFO (27, 28).

We demonstrate a rare case of migraine-like headache with visual aura triggered by endovascular therapy of PCA aneurysm. The generation of the migraine-like headache with visual aura is probably associated with microemboli due to the endovascular stenting coil. This case supports the hypothesis that migraine can be associated with microemboli of variant origins. Finally, from this case, we learned that we need to keep in mind that a secondary migraine with aura can be caused by endovascular coiling treatment and an antiplatelet agent may relieve the headaches.

We would like to thank the patient for her cooperation. The authors thank all participants in the study.

Copyright © 2021 Chen, Zhang, Li, Deng, Wang, Cao, Xie and Wang. This is an open-access article distributed under the terms of the Creative Commons Attribution License (CC BY). The use, distribution or reproduction in other forums is permitted, provided the original author(s) and the copyright owner(s) are credited and that the original publication in this journal is cited, in accordance with accepted academic practice. No use, distribution or reproduction is permitted which does not comply with these terms.