Alternating Hemiplegia of Childhood: Genotype–Phenotype Correlations in a Cohort of 39 Italian Patients

Alternating hemiplegia of childhood is a rare neurological disease characterized by paroxysmal movement disorders and chronic neurological disturbances, with onset before 18 months of age. Mutations in the ATP1A3 gene have been identified in up to 80% of patients. Thirty-nine patients [20 females, 19 males, mean age 25.32 years (7.52–49.34)] have been recruited through the Italian Biobank and Clinical Registry for Alternating Hemiplegia of Childhood. Demographic data, genotype, paroxysmal movement disorders, chronic neurological features, and response to flunarizine have been analyzed. ATP1A3 gene mutations have been detected in 92.3% of patients. Patients have been divided into three groups—p.Asp801Asn mutation patients (26%), p.Glu815Lys cases (23%), and patients with other ATP1A3 mutations—and statistically compared. The Italian cohort has a higher percentage of ATP1A3 gene mutation than reported in literature (92.3%). Our data confirm a more severe phenotype in patients with p.Glu815Lys mutation, with an earlier age of onset of plegic (p = 0.02 in the correlation with other mutations) and tonic attacks. P.Glu815Lys patients most frequently present altered muscle tone, inability to walk (p = 0.01 comparing p.Glu815Lys and p.Asp801Asn mutations), epilepsy, and a more severe grade of dystonia (p < 0.05 comparing p.Glu815Lys and p.Asp801Asn mutations). They have moderate/severe intellectual disability and severe language impairment (p < 0.05). Interestingly, flunarizine seems to be more efficacious in patients with p.Glu815Lys mutation than p.Asp801Asn. In conclusion, our research suggests a genotype–phenotype correlation and provides information on this disorder's features, clinical course, and treatment.

Alternating Hemiplegia of Childhood (AHC) (OMIM #614820) is a rare and peculiar neurologic disorder, first described in 1971 (1). The annual incidence is <1/100,000 newborns (2). In AHC, a complex phenotype combines paroxysmal non-epileptic episodes, often triggered by contact with water, changes in temperature, physical or psychological stress, and epileptic seizures, both focal and generalized, with a high rate of refractory/super refractory status epilepticus (3). Developmental issues, cognitive deficits, neuropsychological impairments, and persistent neurologic disorders (2, 4–6) are expected hallmarks. In 1993, specific diagnostic criteria for AHC were first introduced (7) and then periodically updated. Aicardi's criteria for AHC (8) are (1) onset of paroxysmal events before 18 months of age; (2) repeated bouts of hemiplegia involving the right and left sides of the body during some attacks; (3) episodes of bilateral hemiplegia or quadriplegia starting either as a generalization of a hemiplegic episode or as bilateral from the start; (4) other paroxysmal disturbances including tonic/dystonic attacks, nystagmus, strabismus, dyspnea, and other autonomic phenomena occurring during hemiplegic bouts or in isolation; (5) immediate disappearance of all symptoms upon sleep, with probable recurrence of long-lasting bouts, 10–20 min after awakening; (6) evidence of developmental delay, intellectual disability, neurological abnormalities, choreoathetosis, and dystonia or ataxia; and (7) not attributable to other disorders. A great effort was made to understand the disease's genetic basis. In 2012, In 2012, two independent research groups - a group of German researchers (9) and an international consortium (10)—identified de novo heterozygous mutations in the ATP1A3 gene performing next-generation sequencing to examine the genome of AHC patients (11). Next, this finding was replicated by an independent Japanese study that found ATP1A3 mutations in patients with AHC (12). Currently, pathogenic variants in the ATP1A3 gene are recognized as causing AHC in nearly 80% of patients (13). ATP1A3 gene encodes for the alpha3 subunit of Na+/K+ATPase, which is neuron-specific. Interestingly, the cerebellum seems to be highly susceptive to ATP1A3 dysfunction (14). Despite the growing number of pathogenic variants described, the most extensive cohort studies conducted in various populations showed that three variants account for ~60% of all cases. The p.Asp801Asn variant is detected in 30–43% of all cases, p.Glu815Lys is responsible for 16–35% of cases, and p.Gly947Arg is responsible for 8–15% (13, 15, 16). Mutations in the ATP1A3 gene are associated with other neurological diseases such as rapid-onset dystonia-parkinsonism (DYT12, OMIM 128235) (9), cerebellar ataxia, areflexia, pes cavus, optic atrophy, sensorineural hearing loss (CAPOS) syndrome (OMIM # 601338) (17), the early infantile epilepsy with encephalopathy (EIEE) (18), and the recurrent encephalopathy with cerebellar ataxia (RECA) phenotype (19). Recently, mutations of the RHOBTB2 gene have been identified as responsible for a complex movement disorder with paroxysmal elements similar to AHC, suggesting to evaluate this gene in the diagnostic workup of patients with AHC, in particular those negative for ATPA1A3 mutations (20). Although a second major causative gene has not yet been identified, other gene mutations (ATP1A2, CACNA1A, SLC1A3, SLC2A1) have occasionally been related to AHC (21–24). Concerning pharmacological approaches, the main therapy goals are prophylaxis of paroxysmal attacks and chronic disturbance treatment, as dystonia and epilepsy. Disease-modifying therapy does not exist, albeit several drugs are administered as prophylaxis for paroxysmal attacks. The most frequent drugs used in AHC are flunarizine, benzodiazepines, carbamazepine, barbiturates, and valproic acid (25). It has been widely demonstrated that flunarizine induces a significant improvement in dystonic and plegic episodes (26).

In recent years, scientific efforts are focusing on defining a genotype–phenotype correlation to better understand the pathogenesis of the disease and provide indications for management and treatment. In literature, high interindividual variability as regards the clinical evolution has been reported. However, the investigation of adult patients' outcome excludes a progressive and neurodegenerative disorder (27). This study aims to describe an Italian cohort of AHC patients' genetic and clinical features and further establishes genotype–phenotype correlation. A significant number of patients enrolled for this study had already been included in previous multicenter studies published by Heinzen and colleagues in 2012 (10) and Panagiotakaki et al. in 2015 (13). However, in this research, we examined the clinical phenotype more in detail and flunarizine efficacy in different genotypes.

Thirty-nine patients have been recruited through the I.B.AHC Italian Biobank and Clinical Registry for AHC (I.B.AHC). The diagnosis was based on Aicardi's criteria. All the patients have been diagnosed by consensus of the Scientific Association Committee of the Italian Association of Alternating Hemiplegia of Childhood (AISEA). Patients' referring pediatric neurologists have filled patients' forms, and I.B.AHC data managers validated the information's accuracy.

DNA was obtained from the blood of the probands and parents using standard procedures. ATP1A3 mutations were identified by Sanger (34/39 patients), whole-exome (3/39), or next-generation sequencing for a targeted panel (2/39) for ATP1A3 and other AHC-related genes. The mutation analysis was extended, whenever possible, to the parents to define if the mutation occurred de novo. Variant nomenclature was attributed based on RefSeq (NG_008015.1 and NM_152296, for genomic and mRNA sequences, respectively). Pathogenicity was revised following the original description, according to the ACMG criteria (28).

Clinical, demographic, genetic, and pharmacological data of the 39 Italian patients have been collected. In more detail, data concerning paroxysmal movement disorders, particularly age of onset, type of episode as hemiplegic and tonic attacks, ocular abnormalities and autonomic dysfunctions, and the effect of sleep on episodes were examined. Chronic neurological features at last follow-up, especially muscle tone, gait characteristics, movement disorders (dystonia, chorea, myoclonus, postural or action tremor, bradykinesia), migraine, and the presence of intellectual disability and of varying degrees of language impairment, were also collected. The occurrence of reduced tone or hypertonia due to spasticity was defined “altered muscle tone.” For each patient, gait was assessed, and a differentiation was made between cases with normal gait, wide-based gait, and walking with trunk dystonia (“gait possible”), and subjects able to walk (“gait not possible”). Three degrees of dystonia severity have been identified by differentiating in mild dystonia when not interfering with function, moderate dystonia when interfering with activities in daily life, and severe dystonia when disabling. Intellectual disability was classified as “mild” (IQ of 50–69), “moderate” (IQ of 35–49), or “severe” (IQ <35). Language impairment was stated as mild when not affecting communication abilities, moderate when partially affecting communication abilities, or severe when affecting communication abilities. A distinction was made between AHC typical form (according to Aicardi's criteria for AHC) and atypical forms (24). This last definition was used in case of delayed occurrence of hemiplegic attacks, normal development, predominant dystonic phenotype, absence of quadriplegic attacks, or alternating upper-limb monoplegia. Lastly, the response to treatment with flunarizine was analyzed, considering as an improvement a reduction of at least 30% in duration, frequency, and intensity of the episodes.

Data are described as mean and standard deviation or median and range for continuous variables and as absolute and relative frequencies for categorical variables. Nonparametric analysis (Mann–Whitney U-test) for continuous variables and the Chi square or Fisher's exact test for categorical variables were used to measure differences between groups. Statistical significance was set as 0.017 using Bonferroni correction; all p-values were based on two-tailed tests. Statistical analysis was performed using SPSS for Windows (SPSS Inc., Chicago, Illinois USA). By meaning of ATP1A3 mutation, patients were divided into three groups: patients with p.Asp801Asn mutation, patients with p.Glu815Lys mutation, and patients with other mutations, and statistically compared.

Three out of 39 patients had no ATP1A3 mutations. Tables 1, 2 summarize demographic data and paroxysmal and non-paroxysmal features in different group mutations. 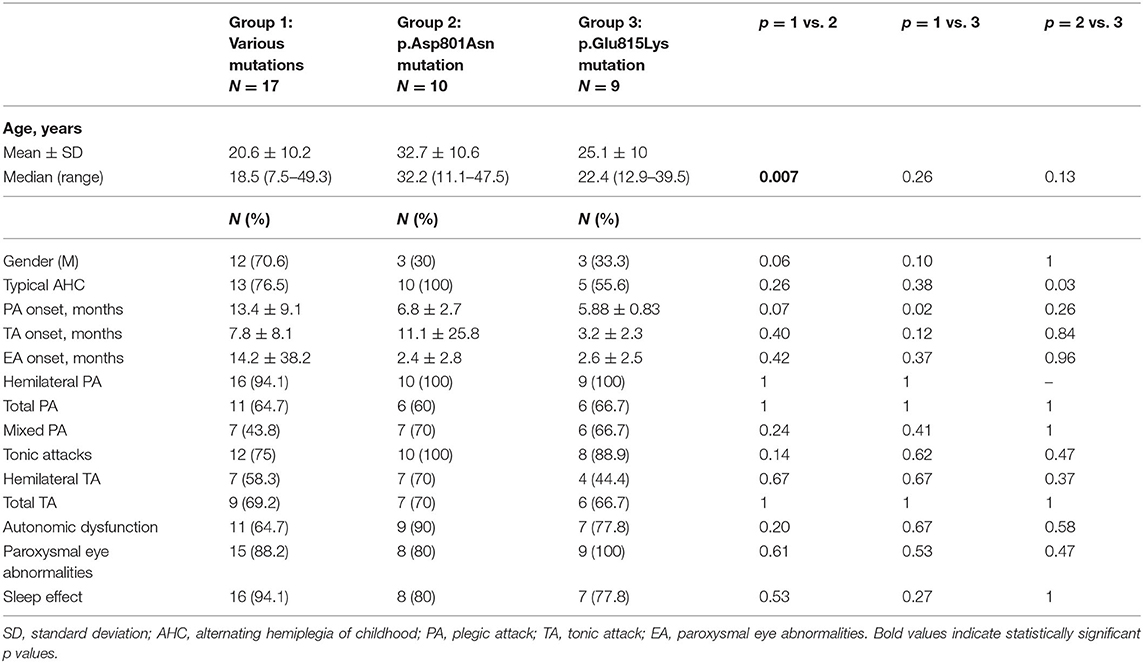 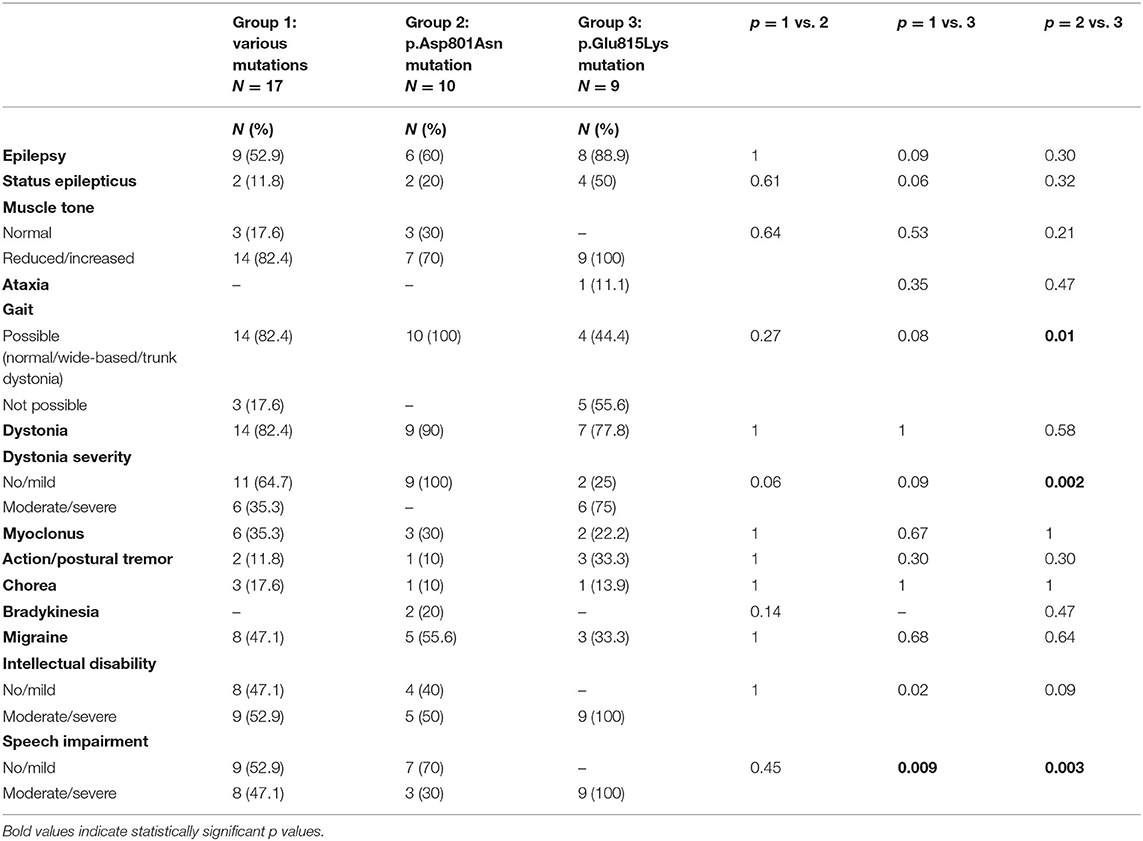 Forty-four percentage of all patients suffered from headache, with a higher percentage in the p.Asp801Asn mutation group (56%, 5/9—information not available for one patient), followed by the group with various mutations (47%, 8/17) (Table 2).

Regarding cognitive features (Table 2), a statistical comparison was made between the group with mild impairment and the group with moderate or severe intellectual disability. Moderate to severe impairment was observed in all patients with the p.Glu815Lys mutation. Lower percentages were found in other patients: 53% (9/17) of patients with other mutations (p = 0.02) and half of those with the p.Asp801Asn mutation (5/10) (p = 0.09). Furthermore, all p.Glu815Lys patients, 47% (8/17) with other mutations (p = 0.009) and 30% (3/10) of p.Asp801Asn patients (p = 0.003), exhibited moderate/severe speech impairment (absent or significantly reduced expressive language).

The group of patients with no gene mutation exhibits somewhat heterogeneous clinical features. All patients had plegic attacks that developed from 0 to 24 months of age, abnormal paroxysmal eye movements, and total tonic attacks. In two out of three patients, paroxysmal events were relieved by sleep. One patient had epilepsy and status epilepticus, and all had dystonia, from mild to severe degree. In one patient, walking was not possible, and two patients showed a wide-based gait. They all had an intellectual disability (one mild and two moderate) and speech impairment (absent or significantly reduced expressive language). Finally, in one out of three patients, flunarizine resulted in a reduction of more than 30% in frequency, duration, and intensity of the episodes.

Prediction of the disease's development and severity using genotype information is the primary aim of genotype–phenotype correlation studies. This knowledge is necessary to evaluate new therapeutic approaches, provide a more accurate prognosis to patients and caregivers, and develop the most appropriate care management guidelines. An increasingly in-depth knowledge of the disease in its clinical and genetic aspects will allow for more effective management and treatment.

Data of mutations reported within this study have been deposited in Leiden Open Variation Database (databases.lovd.nl/shared/references/DOI:10.3389/fneur.2021.658451).

RC, MS, and EDG: conception and design of the study. RC, MS, LP, MC, I.B.AHC Consortium, and EDG: acquisition and analysis. RC, MS, LP, MC, LN, and EDG: drafting of the manuscript or tables. All authors contributed to the article and approved the submitted version.

We want to thank all families of our patients and AISEA Onlus (Italian Association of Alternating Hemiplegia of Childhood) for their unconditional support. This work was developed within the framework of the DINOGMI Department of Excellence of MIUR 2018-2022 (law 232/2016).

Copyright © 2021 Cordani, Stagnaro, Pisciotta, Tiziano, Calevo, Nobili, I.B.AHC Consortium and De Grandis. This is an open-access article distributed under the terms of the Creative Commons Attribution License (CC BY). The use, distribution or reproduction in other forums is permitted, provided the original author(s) and the copyright owner(s) are credited and that the original publication in this journal is cited, in accordance with accepted academic practice. No use, distribution or reproduction is permitted which does not comply with these terms.