Glioblastoma (GB), also commonly known as GB multiforme (GBM), is a highly aggressive malignancy that originates from either spinal cord or the brain (1). Although people in any age groups can develop GBM, this malignancy mainly affects patients older than 65 years old (2, 3). GBM may cause seizures, vomiting, nausea, and worsening headaches (4). Surgical resection followed by radiation therapy or oral chemotherapy is usually applied in the treatment of GBM (5). However, even with timely and effective treatment, only 25 and 5% of patients can survive for more than 1 and 5 years, respectively, and the average survival time is only 12–18 months (6, 7). Even worse, with the growth of aging population, incidence of GBM is increasing, leading to a serious threat to public health (8). Therefore, improving of GBM treatment is of great importance.

Chemotherapy and radiation therapy cause significant side effects and are not suitable for many cases of patients with GBM (9). With the advantages of specific targeting of cancer cells and less side effects, targeted therapies are emerging novel anticancer approaches that regulate gene expression network involved in human diseases, such as cancers, to achieve therapeutic approaches (10, 11). For example, regulating the expression of the epidermal growth factor receptor (EGFR) is a promising target for the treatment of GBM (12). Although advances have been made in GBM-targeted therapy, targets, safer, and more effective targets are still needed to improve GBM treatment. Circular RNAs (circRNAs) are a class of self-ligated RNAs with no or limited protein-coding capacity. CircRNAs have been found to be involved in many biological processes. For example, circRNA-vgll3 can promote osteogenic differentiation of adipose-derived mesenchymal stem cells (13) and circRNA Cerebellar-degeneration-related protein 1 antisense RNA (CDR1as) can regulate the proliferation of human periodontal ligament stem cells (14) In addition, cicRNAs have been found to be involved in the development of cancer by regulating the expression of targeted genes (15, 16). Therefore, certain circRNAs could be targeted to treat GBM. CircNUP98 is a novel identified circRNA, which is derived from the NUP98 gene. A recent study has found that circNUP98 was significantly upregulated in renal cell carcinoma (RCC) and knockdown of circNUP98 inhibited RCC cell proliferation, migration, and invasion (17). However, it has a role in GB is unknown. MiR-519a-3p has a critical role in many cancers. For example, the downregulation of miR-519a-3p can enhance tumor progression in gastric cancer (18) and it can promote tumor growth in hepatocellular carcinoma (19). Previous studies have found that miR-519a plays an anticancer role in GB by regulating GBM cell proliferation, migration, and invasion (20). Our preliminary analysis showed that pre-mature miR-519a-3p was predicted to be a target of circNUP98. Therefore, in this study, we aimed to investigate the role of circNUP98 in GB and whether it functions by regulating miR-519a-3p.

This study enrolled 58 patients with GBM (38 males and 20 females, 69.1 ± 6.6 years old) who were admitted at the Taizhou People's Hospital (ethics approval was obtained from the Ethics Committee of this hospital) between January 2018 and January 2020. GBM and paired non-cancer tissues (3 cm around tumors) were collected from each of the patient. All the patients were willing to donate tissue samples and signed the informed consent. All the tumors were located to the supratentorial region and tissue samples were either collected during surgical resection or through biopsies. Patients who had other clinical disorders or initiated therapies were excluded.

Two GBM cell lines U87 and U-251 ATCC (Manassas, USA) were used for in-vitro functional assays and gene expression analysis. These two cell lines were cultured in Eagle's Minimum Essential Medium (ATCC, USA) containing 1 mM sodium pyruvate and 10% fetal bovine serum in a humidified atmosphere with 5% CO2 at 37°C. For cell transfection, pcDNA3.1-circNUP98 vector or miR-519a-3p mimic Invitrogen (Carlsbad, CA, USA) was transfected into U87 and U-251 cells by using the Gene Pulser Xcell Electroporation System Bio-rad (Hercules, CA, USA). 10 μg vector or 45 nM mimic was transfected into 1 × 106 U87 and U-251 cells. Empty vector or negative control (NC) miRNA was transfected to serve as the NC groups. Subsequent experiments were performed at 48 h after transfection. Short hairpin RNAs (shRNAs) targeting circNUP98 were ordered from the GenePharma (Shanghai, China). Cloning, lentivirus production, and infection were performed following the instructions of the manufacturer.

The complementary DNA (cDNA) was synthesized by using the M-MLV Reverse Transcriptase Kit (ELK Biotechnology, Wuhan, China) with the following conditions: 42°C for 60 min, 85°C for 5 min, and hold at 4°C. Following the preparation of cDNA samples, qPCRs were performed to determine the expression levels of circNUP98, pre-mature miR-519a-3p, and mature miR-519a-3p. Glyceraldehyde-3-phosphate dehydrogenase (GAPDH) and U6 were selected for internal controls. PCR thermal cycling were as follows: 95°C for 1 min, followed by 40 cycles of 95°C for 15 s, 58°C for 20 s, and a final extension of 72°C for 45 s. The relative expression levels were calculated by using the 2−ΔΔCT method (21) and the samples were run in triplicate. The primer sequences are listed in Table 1.

Biotinylated RNAs, including pre-mature miR-519a-3p wild-type (WT) (bio-pre-miR-519a-3p-WT: 5′- CUGUGACACUCUAGAGGGAAGCGC-3′), mature miR-519a-3p wild type (bio-pre-miR-519a-3p-Mut: 5′-CUGUGGGGCUCUACAAGAAAGCGC-3′), and NC miRNA (bio-NC: 5′-CGAUUGGCUCGAAGCGCGUCAAGA-3′), were purchased from the Invitrogen. For cell transfection, 1 × 106 U87 and U-251 cells were transfected with 45 nM bio-pre-miR-519a-3p-WT, bio-pre-miR-519a-3p-Mut, or bio-NC. Cells were cultivated for 48 h after transfection followed by the preparation of cell lysate samples. The labeled RNAs were then pulled down by using streptavidin agarose magnetic beads Life Technologies (Gaithersburg, MD, USA). After that, total RNAs were isolated and reverse transcription was performed. Finally, RT-qPCR was performed with GAPDH as the internal control to determine the expression levels of circNUP98.

To detect the interaction between circNUP98 and miR-519a-3p, dual-luciferase assay was performed. The sequences of WT or mutated (MUT) circNUP98 were cloned into XbaI-FseI sites of pGL3 promoter. Then, the luciferase reporter plasmids were cotransfected with miR-519a-3p mimics into U87 and U-251 cells by using Lipofectamine 2000. After transfection for 48 h, cells were lysed, and the relative luciferase activities were detected by using the Dual-Luciferase Reporter Assay System Promega (Madison,WA, USA).

Nucleus and cytoplam samples from U87 and U-251 cells were prepared by using the Nuclear/Cytosol Fractionation Kit (BioVision (Mountain View, CA, USA); #K266). Both the samples were subjected to RNA isolation followed by semi-quantitative PCRs to determine the expression of circNUP98. Data visualization was performed by separating PCR products using 1% agarose gels followed by image capturing under UV lights.

BrdU incorporation was used to reflect cell proliferation. Following transfection, cells were cultivated in a 96-well plate with 5,000 cells per well and cultured at 37°C in 5% carbon dioxide (CO2). Cells were cultured for 48 h followed by incubation with 10 μM BrdU BD Pharmingen (San Diego, CA, USA) for 3 h. Following cell fixation, cells were incubated with peroxidase-coupled anti-BrdU antibody [ab6326; 1:200; Sigma-Aldrich (St. Louis, MO, USA)] at room temperature for 1 h. After that, cells were further incubated with 5 μM peroxidase substrate (tetramethylbenzidine) for another 30 min. Finally, optical density (OD) values at 450 nM were determined to reflect cell proliferation after the deduction of background values, which were the OD values of wells without BrdU treatment but with BrdU antibody incubation.

All the animal experiments were approved by the Animal Ethics Committee of Taizhou People's Hospital and were performed according to the Guide for the Care and Use of Laboratory Animals. A 6-week-old female nude mice were randomly divided into two groups (n = 6/group). U87 cells with the overexpression of circNUP98 or control U87 cells were diluted to the density of 1.5 × 105 cells in 2 μl phosphate buffered saline (PBS) and then injected into the brain. Mice were monitored until the following events were observed: severe central neural system invasion symptoms such as paralysis, arched back, or dead.

All the experiments were repeated three times and the data were shown as mean ± SD. Average values of gene expression levels in three technical replicates were inputted into Heml 1.0 Software to generate heatmaps, which reflect differential gene expression levels. Two independent groups were compared by the unpaired t-test. The ANOVA Tukey's test was used to compare the multiple independent groups. Differences were statistically significant when p < 0.05. 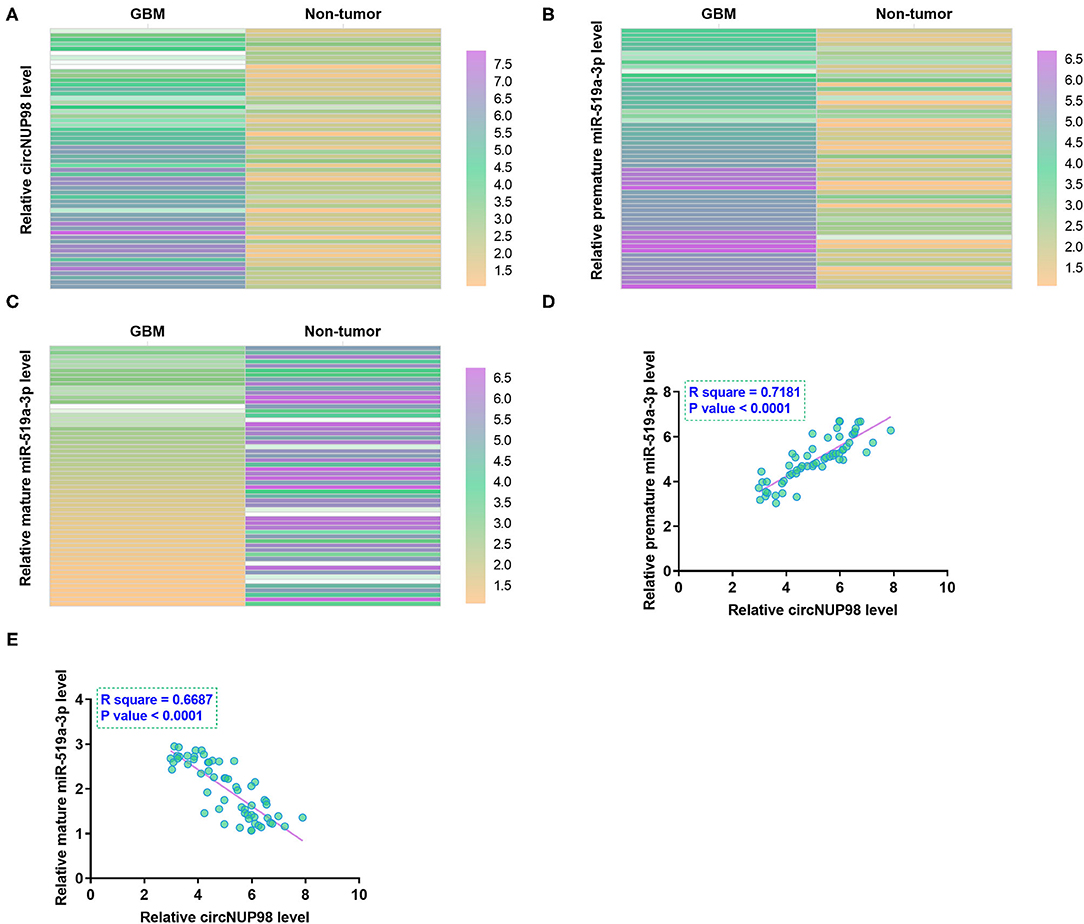 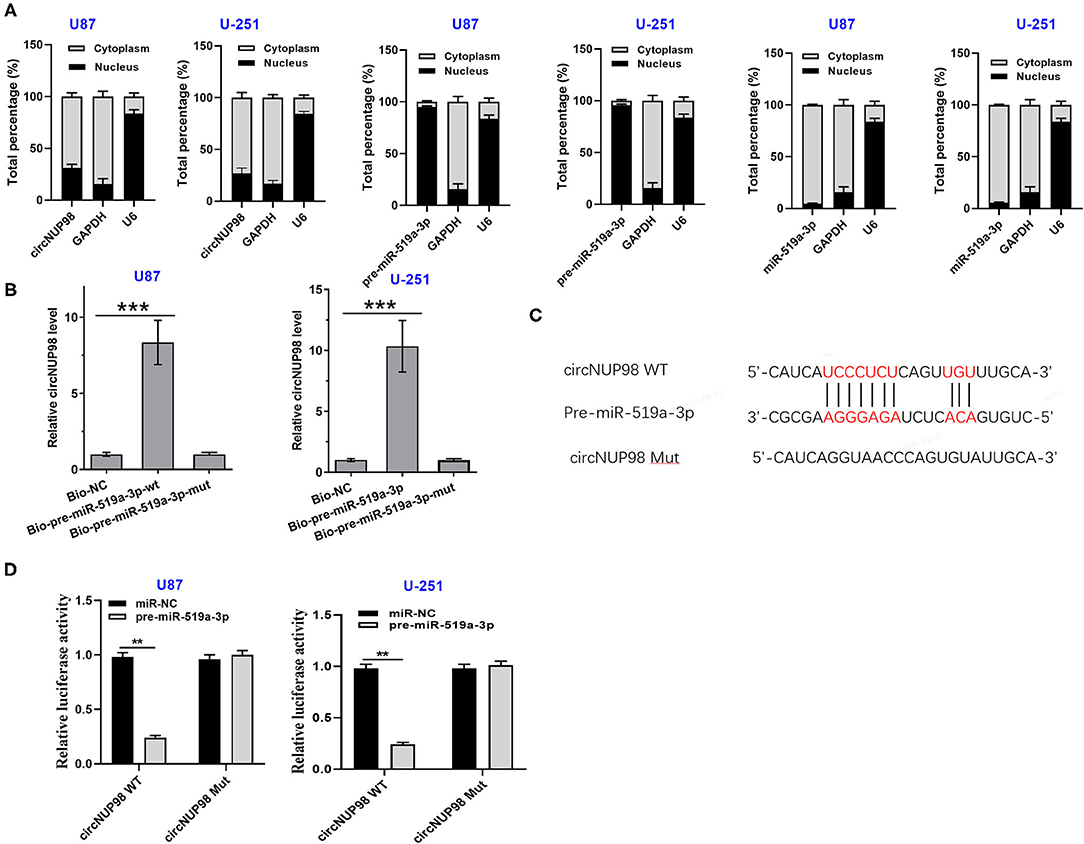 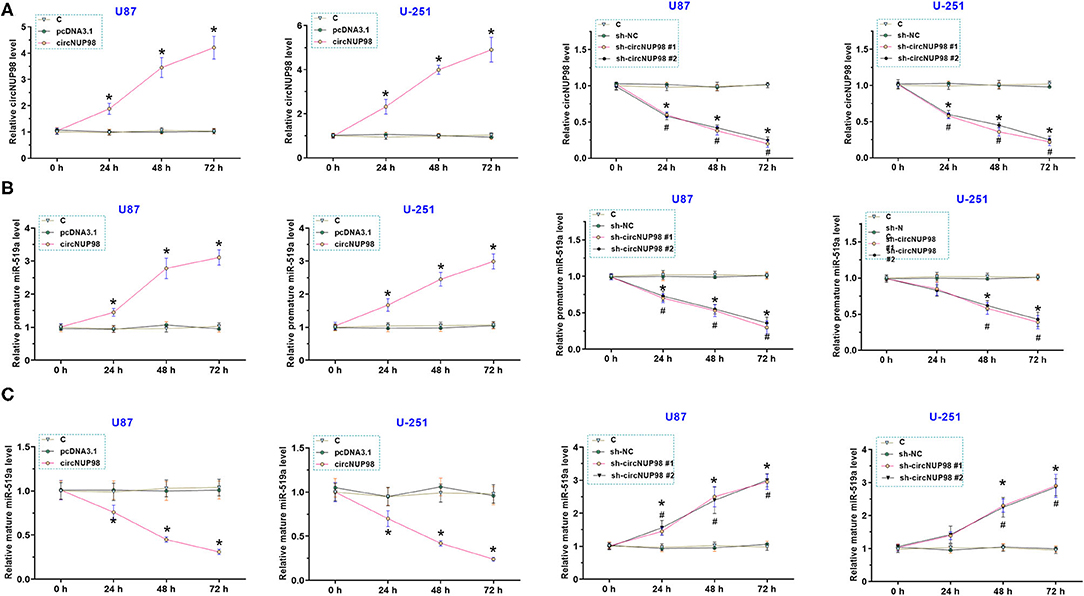 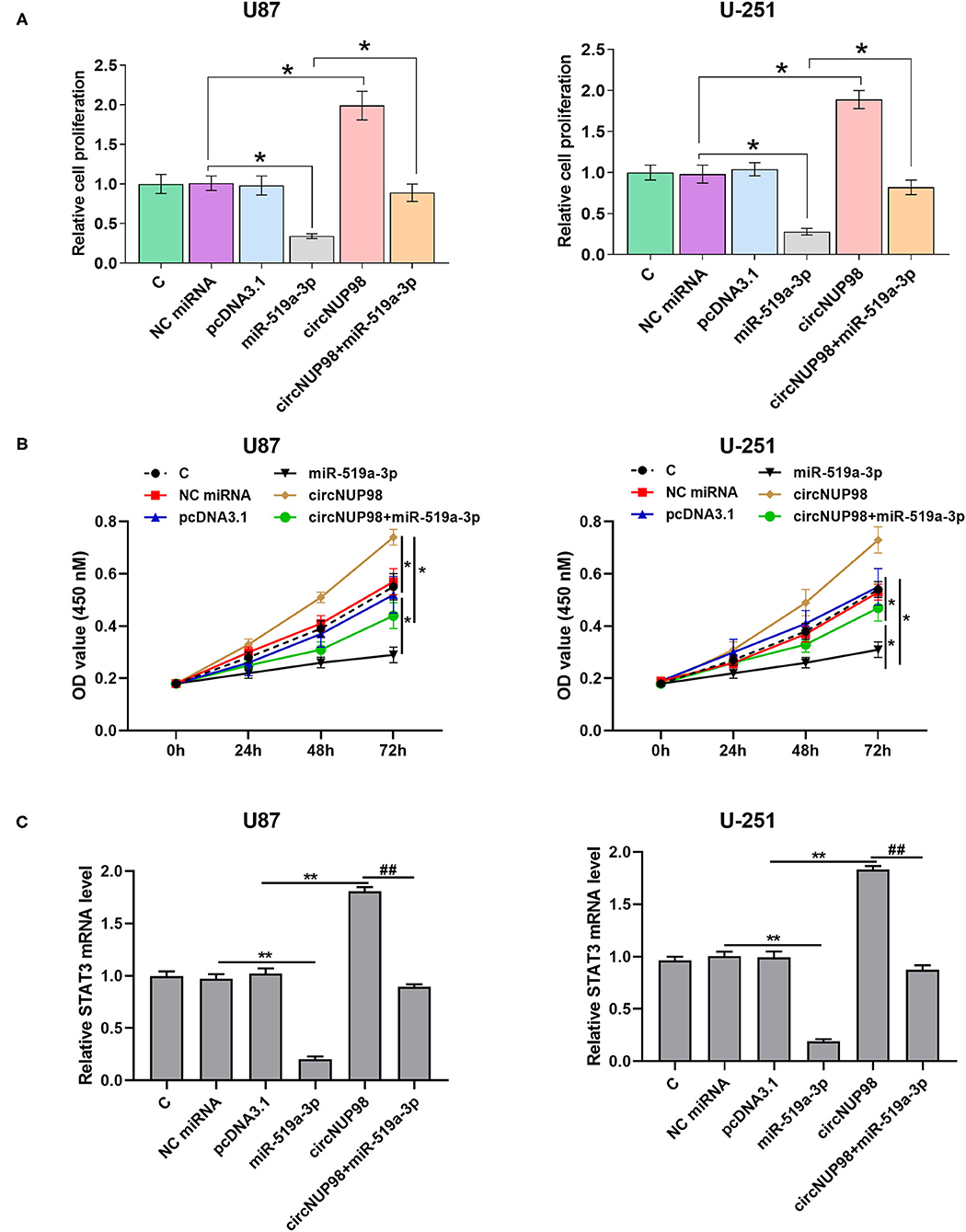 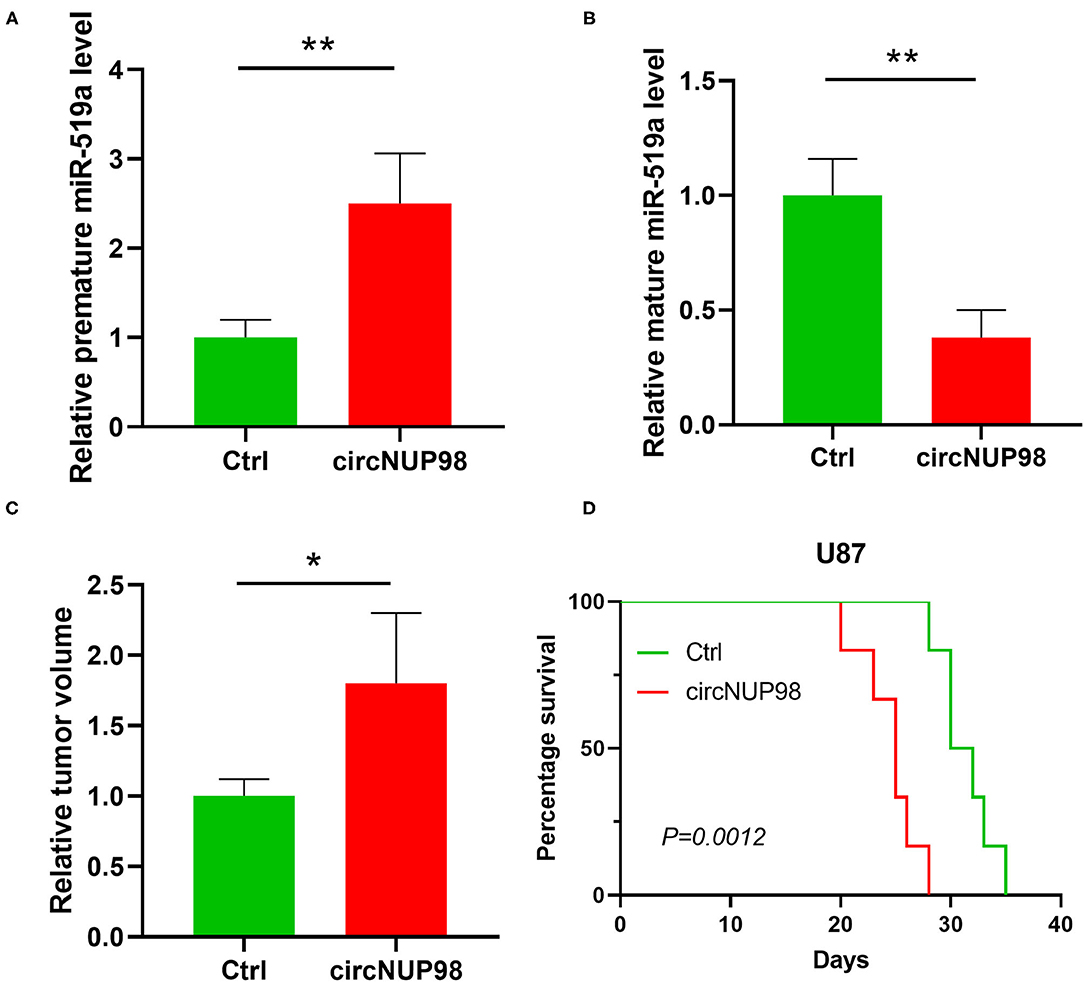 CircNUP98 is a recently characterized circRNA with known functions only in RCC (17). It was observed that STAT3 induces the upregulation of circNUP98, which, in turn, downregulates miR-567 to upregulate Peroxiredoxin III (PRDX3), thereby increasing cell proliferation and suppressing cell apoptosis (17). This study mainly explored the expression pattern and functionality of circNUP98 in GBM. We found that upregulation of circNUP98 resulted in increased proliferation rate of GBM cells. Our results also showed that overexpression of circNUP98 resulted in significantly reduced mice survival. Our data suggested that circNUP98 is an oncogenic circRNA in GBM. However, the potential of circNUP98 in the diagnosis and treatment of GBM remains to be further explored.

Previous studies have found that circRNAs can be translatable and circRNA-encoded functional proteins are involved in tumorigenesis (24). A recent study has reported that a circular E-cadherin (circ-E-Cad) RNA can promote GB tumorigenicity via activating EGFR–STAT3 pathway by encoding an oncogenic E-cadherin variant (25). CircNUP98, as a circRNA, might be also function in GBM by encoding a functional protein, which deserves to be further explored in our future study.

However, this study has some limitations. Firstly, our sample size is not big enough. Our future study will collect more samples to support our findings. In addition, this study only investigated the effect of circNUP98 on GB cell proliferation. CircNUP98 may also function in GB by regulating other biological processes, which deserved to be further explored.

CircNUP98 was highly upregulated in GBM tissues and it may sponge pre-mature miR-519a-3p in nucleus to suppress it maturation, thereby increasing cell proliferation.

The studies involving human participants were reviewed and approved by Taizhou People's Hospital. The patients/participants provided their written informed consent to participate in this study.

The authors would like to express our gratitude for those who have critically reviewed this manuscript and those who give us help during this experiment.

Copyright © 2021 Lu, Lou, Jiang, Liu, Jiang and Wang. This is an open-access article distributed under the terms of the Creative Commons Attribution License (CC BY). The use, distribution or reproduction in other forums is permitted, provided the original author(s) and the copyright owner(s) are credited and that the original publication in this journal is cited, in accordance with accepted academic practice. No use, distribution or reproduction is permitted which does not comply with these terms.