We present the case of a middle-aged patient who had four recurrent acute basilar artery occlusions over a period of 3 months, each time successfully treated with mechanical thrombectomy. Extensive stroke work-up showed no obvious stroke etiology aside from a dysplastic right vertebral artery with multifocal stenoses. Treatment with different antiplatelet and anticoagulant regimes did not prevent basilar artery occlusion recurrence. Therefore, transarterial coil occlusion of the V4-segment of the right vertebral artery was performed as ultima ratio without complications. At final discharge, the patient had no persistent neurological deficits. No further cerebrovascular events occurred over a 12-month follow-up period.

Basilar artery occlusion (BAO) entails a high risk for severe disability and mortality. The role of mechanical thrombectomy (MT) in large vessel obstruction of the posterior cerebral circulation has been discussed controversially (1). However, more recent data support an effective role of MT in BAO (2, 3). Especially data on treatment strategies of recurrent BAO are scarce, with only few cases published (4–8). A case of four recurrent BAOs refractory to various medical treatment regimens has not yet been described in the literature.

A 53-year-old man presented with acute onset of dizziness, left-sided hemiparesis and progressive loss of consciousness. CT angiography (CTA) revealed BAO and additionally showed a calcified dysplastic right vertebral artery (VA) with multifocal stenoses. One month earlier, the patient had suffered from a bithalamic infarct treated with intravenous thrombolysis (IVT). The patient recovered well and had been discharged with atorvastatin and dual antiplatelet therapy with aspirin and clopidogrel, though aspirin had been discontinued few days before readmission. Vascular risk factors included dyslipidemia, coronary heart disease and peripheral artery disease.

IVT and MT achieved complete recanalization (Figures 1A1,A2) and an excellent neurological outcome with a modified Rankin Scale (mRS) of 0 and a National Institutes of Health Stroke Scale (NIHSS) of 0. Aspirin and subcutaneous enoxaparin were initiated during stroke work-up and early rehabilitation. Nine days post-thrombectomy, while still in hospital, the patient suddenly developed acute left-sided hemiparesis and dysarthria. MR angiography (MRA) showed distal BAO; subsequently direct MT was performed. Again, full recanalization was achieved and the patient remarkably improved (mRS 0/NIHSS 0) (Figures 1B1,B2). Two weeks later, the patient was discharged without any neurological deficits with a combination therapy of dabigatran, aspirin and atorvastatin due to the recurrent BAO. Notably, he did not take any additional drugs potentially interfering with blood clotting (such as nonsteroidal anti-inflammatory drugs). 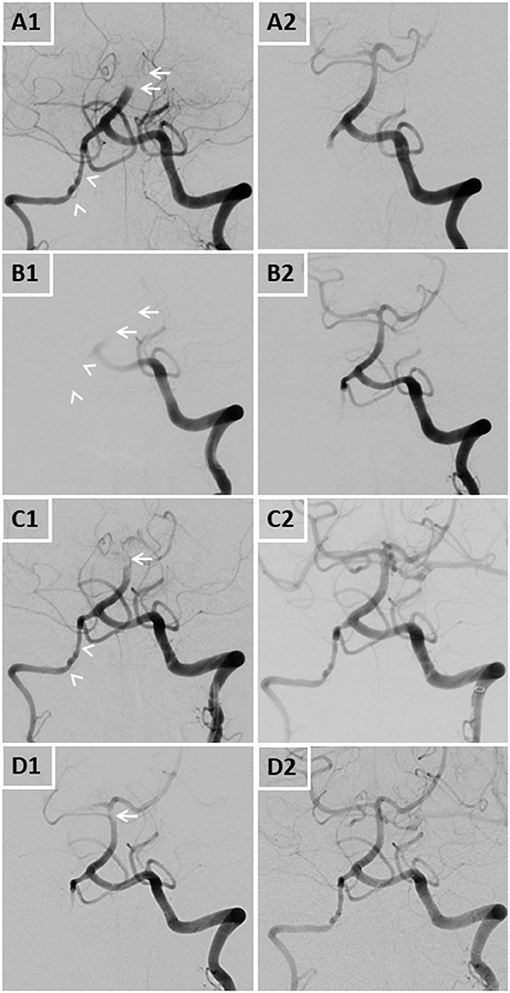 Four days after discharge, the patient was readmitted with left-sided hemiparesis and dysarthria. CTA confirmed the third recurrent BAO, and the patient was again successfully recanalized with MT (Figures 1C1,C2). Follow-up MRI displayed new small infarcts in both occipital lobes and both cerebellar hemispheres, but again the patient had very good clinical outcome (mRS 0/NIHSS 0). Platelet aggregation testing showed a very good response to aspirin. After further stroke work-up and early rehabilitation, the patient was discharged with no persisting deficits and switched to a combination treatment of phenprocoumon and aspirin.

One week after discharge, the patient again presented with vertigo and left-sided sensory deficits. MRA again showed a thrombus in the distal basilar artery and the proximal left posterior cerebral artery, which were removed by endovascular therapy using an aspiration catheter (Figures 1D1,D2).

After ruling out numerous etiologies for recurrent BAO and as all strokes occurred in the same arterial territory, arterio-arterial embolism originating from the dysplastic multifocally stenosed right VA was regarded as the presumed cause, with the most likely underlying process being either atherosclerosis or fibromuscular dysplasia (FMD).

As different aggressive antithrombotic medical treatments had failed to prevent recurrent BAO, we decided for a deconstructive interventional approach after careful consideration and elaborate discussion with the patient. Since blood supply by the left VA seemed sufficient for the posterior cerebral circulation, transarterial coil-occlusion of the right VA was performed. The proximal V4-segment was occluded in a cross-over technique with multiple platinum coils, whereas the right PICA and the distal V4-segment were preserved (Figures 2A–C). 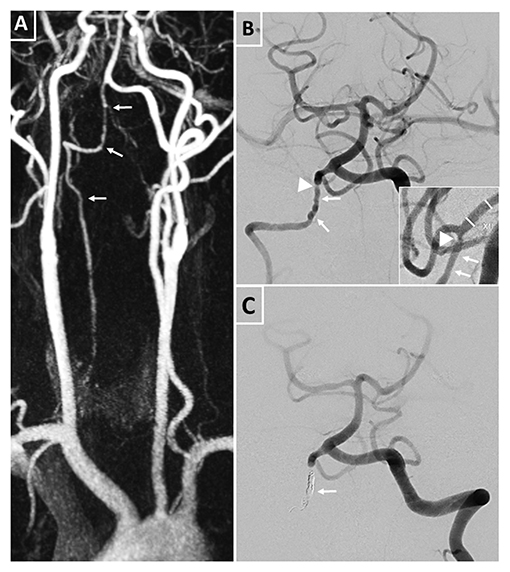 The patient was ultimately discharged without focal neurological deficits/residual symptoms (mRS 0/NIHSS 0) and with dual antiplatelet therapy (aspirin and clopidogrel) in order to minimize risk of recurrent atherothrombotic events. Clopidogrel was discontinued after 6 months. No recurrent cerebrovascular events occurred during a 12-month follow-up period. Figure 3 depicts a full timeline of the mentioned events.

We present a patient with four recurrent BAO that had occurred during a remarkably short time period and were all treated successfully with endovascular stroke therapy leading to excellent outcome. Notably, a multifocally stenosed right VA was identified as the most likely underlying cause. This apparently highly aggressive arterial embolic source could not be controlled with different medical strategies. Therefore, successful coil occlusion of the V4 segment of the VA was performed. During the follow-up period, no further cerebrovascular events occurred.

Recurrent BAO was reported in the context of VA dissection (3), neoplasia (5), antiphospholipid syndrome (6) and VA stenosis (5). A recent case series on recurrent cerebral large vessel occlusion suggested that periinterventional endothelial lesions might contribute to recurrent large vessel occlusions (4). Notably, we did not detect such lesions in any angiographic series and no other intervention-associated complications such as dissections or vasospasms had occurred in our patient.

Therapeutic VA occlusion has been described in the context of ruptured dissecting aneurysms, external VA compression or pre-operative intervention in cervical spine trauma (9–11). Our case is the first report of recurrent BAO with VA occlusion as final therapy. Successful recanalization by MT in every instance, good collateralization, a short symptom to recanalization time as well as site and size of thrombi contributed to the favorable outcome of our patient (3).

Regarding the stenosed right VA, our patient's history of coronary heart and peripheral artery disease suggest an atherosclerotic cause as source of recurrent embolism. However, the inefficacy of aggressive antiplatelet and anticoagulation therapy points toward an alternative non-atherosclerotic mechanism, such as focal FMD.

Copyright © 2021 Leber, Fandler-Höfler, Kneihsl, Augustin, Deutschmann and Gattringer. This is an open-access article distributed under the terms of the Creative Commons Attribution License (CC BY). The use, distribution or reproduction in other forums is permitted, provided the original author(s) and the copyright owner(s) are credited and that the original publication in this journal is cited, in accordance with accepted academic practice. No use, distribution or reproduction is permitted which does not comply with these terms.