Background: Spinal and bulbar muscular atrophy (SBMA) is an X-lined motor neuron disease characterized by progressive muscle weakness, bulbar palsy, and dysphagia. Dysphagia is associated with tongue weakness, which is a common manifestation of SBMA. This study aimed to investigate the correlations between tongue pressure and dysphagia in patients with SBMA.

Conclusion: Tongue pressure assessment can be used as a safe and easy tool to assess swallowing function in SBMA patients. Moreover, MTP reflects functional states, including activities of daily living and gait performance, showing it to be a potential biomarker for physical performance in SBMA.

Spinal and bulbar muscular atrophy (SBMA) is an X-linked neurodegenerative disease caused by an expansion of the CAG repeat sequence in the first exon of the androgen receptor (AR) gene (1–3). It is characterized by progressive proximal limb and bulbar weakness, dysphagia, and generalized fasciculations, predominantly of the facial muscles (4, 5). Among these symptoms, dysphagia contributes to aspiration pneumonia, which is the primary cause of death in SBMA (6).

Reduced tongue pressure is associated with the development of dysphagia symptoms (9). Previous studies have suggested an association with various diseases, including stroke, sarcopenia, and Parkinson's disease (10–12). In patients with SBMA, the atrophy and weakness of the tongue are common early findings (13, 14). Involvement of the motor nuclei located in the brainstem causes the characteristic bulbar muscle weakness and atrophy (15). The bulbar muscle weakness leads to the typical patterns of dysphagia in about 80% of patients with SBMA, including decreased bolus clearance and vallecular residue after swallowing (16, 17). Therefore, the evaluation of tongue strength can lead to an estimate of the swallowing function in SBMA patients. Moreover, since tongue pressure decreases early in the disease, tongue pressure measurement will be helpful for early detection in SBMA.

This was a retrospective review study of SBMA patients admitted to the Kyungpook National University Chilgok Hospital between January 2019 and June 2020. This study was approved by the Institutional Review Board of Kyungpook National University Chilgok Hospital (No. 2020-10-007). Ethical approval was waived in view of the retrospective nature of the study.

Patients with a genetically confirmed SBMA diagnosis were retrospectively identified from our hospital's videofluoroscopic swallowing study (VFSS) database from January 2019 to June 2020. The inclusion criteria were: (1) age ≥ 20 years, (2) at least 38 CAG repeats in the androgen receptor gene, (3) tongue pressure assessment performed on the same day of VFSS, and (4) clinical diagnosis of SBMA with more than one of the following symptoms: muscle weakness, muscle atrophy, bulbar palsy, hand tremor, and dysphagia. The exclusion criteria were: (1) any history of androgen suppression therapy, and (2) presence of other dysphagia-related diseases, such as stroke or nasopharyngeal cancer.

Swallowing evaluation was conducted using videofluoroscopy with a modified Logemann protocol. Participants were seated upright on a chair, and nasogastric tubes were removed before the study. Test diets included diluted barium (35% w/v), curd-type yogurt, a semi-blended diet, and boiled rice. Images were recorded at a speed of 30 frames per second using a digital capture card (BR278; Beautifulrecorder, Guangzhou, China). Recorded images were analyzed frame-by-frame and scored based on the videofluoroscopic dysphagia scale (VDS) and penetration-aspiration scale (PAS). Two experienced physiatrists with more than 2 years' experience in VFSS interpretation verified the results.

The VDS is a validated tool to predict the prognosis of dysphagia in various etiologies. It consists of 14 items: lip closure, bolus formation, mastication, apraxia, tongue-to-palate contact, premature bolus loss, oral transit time, triggering of pharyngeal swallow, vallecular residue, laryngeal elevation, pyriform sinus residue, coating of pharyngeal wall, pharyngeal transit time, and aspiration. The total score ranges from 0 to 100, with higher scores indicating worse swallowing function (18). Lip closure, bolus formation, mastication, and tongue-to-palate contact were scored on three levels as follows: normal, inappropriate, or none. Apraxia was scored as follows: none, mild, moderate, or severe. The amount of premature bolus loss was classified into four levels: none, <10%, 10–50%, or >50% of bolus. Oral transit time was scored on two levels: ≤ 1.5 or >1.5 s. Triggering of pharyngeal swallow was graded on two levels: normal or delayed. The amount of vallecular residue, and pyriform sinus residue were classified into four levels: none, <10%, 10–50%, or >50% of the area of the vallecular or pyriform sinus in two-dimensional view. Laryngeal elevation was classified into two levels: normal or impaired. Coating of pharyngeal wall was graded on two levels: absent or present. Pharyngeal transit time was scored on two levels: ≤ 1.0 or >1.0 s. Aspiration was graded on three levels: none, supraglottic penetration, or subglottic aspiration.

The PAS is an 8-point scale for identifying the severity of penetration or aspiration, with higher scores representing a greater risk of aspiration (19). This is determined by the depth of material invasion into the airway and whether the effort is provided to expel the material. Epiglottic retroflexion was evaluated based on the findings of VFSS. Decreased epiglottic retroflexion was defined as a diminished degree of vertical to horizontal epiglottic movement during swallowing.

Maximal tongue pressure (MTP) was measured using TPS-100 (CyberMedic, Iksan, South Korea) on the same day as the VFSS. It was measured via oral pressures generated against the air bulb of the device. Patients were asked to compress the air bulb on their tongue against the anterior region of hard palate for 3 s as hard as possible, and the maximal value was recorded. After three trials with intervals of 1 min, the average of the maximal pressures was selected for the analysis. Participants underwent two sets of assessments before and after the VFSS, respectively, and the result of the first set was used in the analysis as the MTP.

Functional measures included the amyotrophic lateral sclerosis functional rating scale-revised (ALSFRS-R), and a 6-min walk test (6MWT). The ALSFRS-R is a validated questionnaire-based, 12-item functional scale (20). It is divided into four domains: bulbar, gross motor, fine motor, and respiratory. The total score of ALSFRS-R ranges from 0 to 48, and higher scores indicate better function. The 6MWT is a reliable measure of functional capacity in SBMA. It was conducted according to a previous study to evaluate gait function and endurance (21).

Pearson's and Spearman correlation analyses were used to analyze the correlations of MTP with clinical, swallowing, and functional parameters. Pearson's correlation coefficient was calculated for normally distributed continuous variables, and spearman's correlation coefficient was calculated for non-normal distributions. One-way ANOVA with Tukey HSD post-hoc test was used to compare the swallowing parameters among the different disease duration groups. Continuous variables were compared between two groups with the use of Student's t-test. Within-day test–retest reliability was analyzed by computing the intraclass correlation (ICC). Statistical significance was accepted when a p-value was < 0.05. Statistical analyses were performed using the statistical software R version 3.6.0 (R Foundation for Statistical Computing, Vienna, Austria). 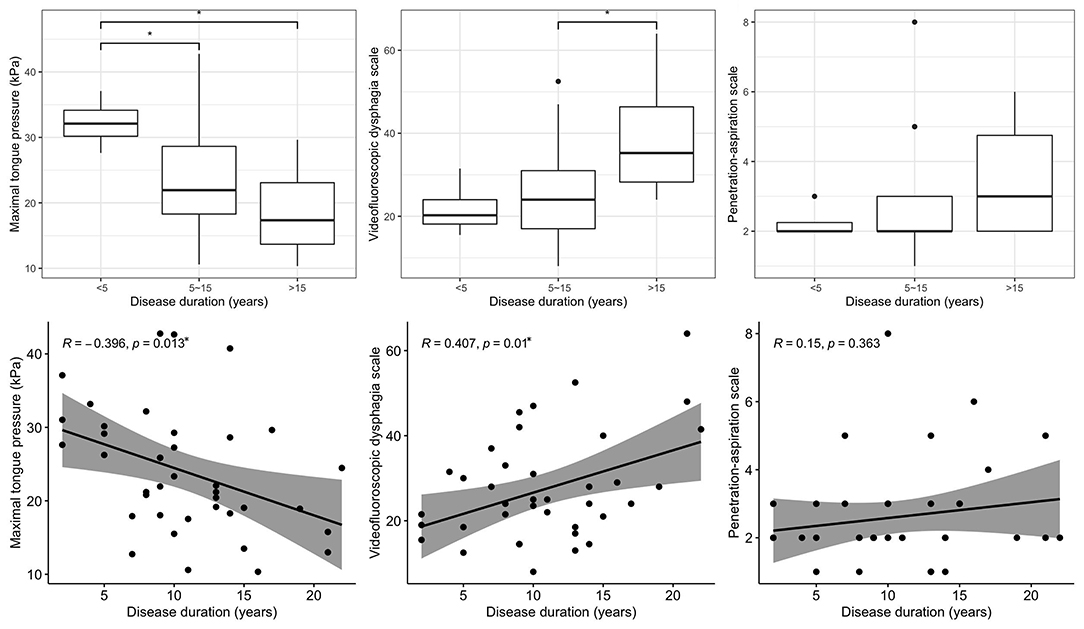 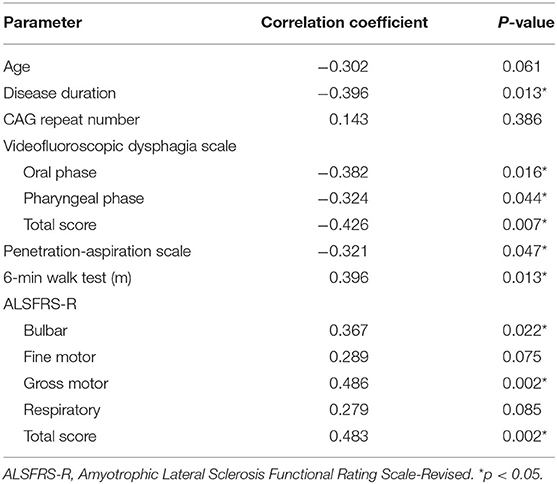 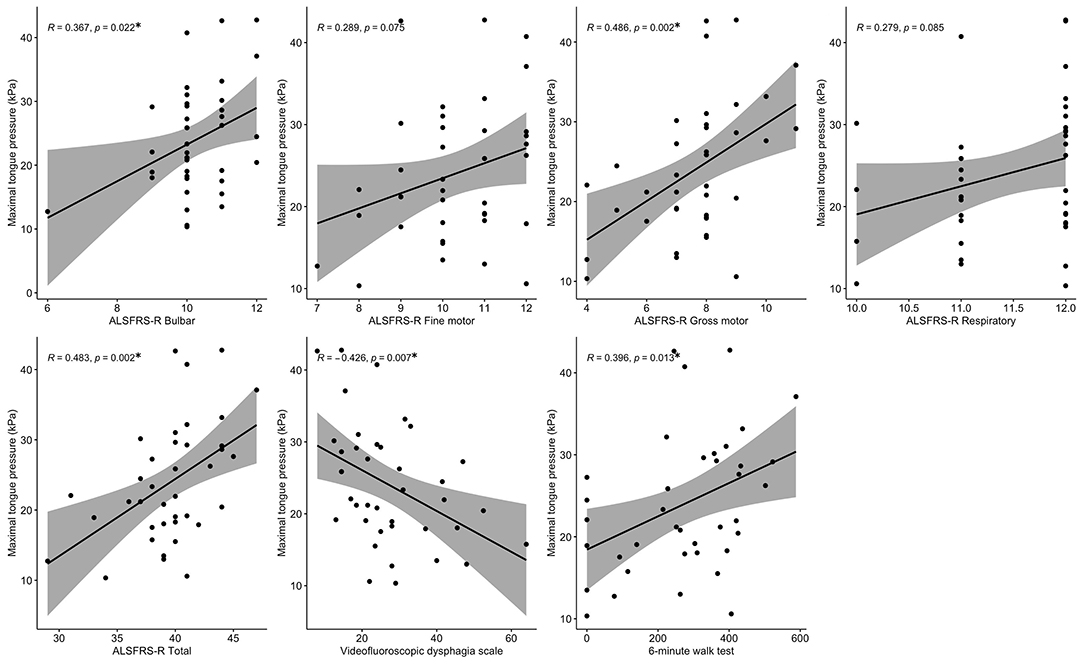 This study revealed that MTP was negatively associated with disease duration, VDS, and PAS in patients with SBMA, which suggests that it decreases with disease progression and reflects swallowing function. Moreover, MTP was positively associated with the bulbar and gross motor domains of the ALSFRS-R and the 6MWT, which implies that MTP also reflects physical performance in patients with SBMA.

Mano et al. (22, 23) suggested that tongue pressure is a reliable biomarker of swallowing function in SBMA patients. That study reported significant relationships between tongue pressure and swallowing parameters mainly based on patient responses to questionnaires, such as the swallowing quality of life (SWAL-QOL) and swallowing disturbance questionnaire-Japanese (SDQ-J). The novelty of our study is that it showed significant correlations between MTP and objective swallowing measures, including VDS, PAS, and epiglottic retroflexion based on the findings of VFSS. This is consistent with the previous findings that SBMA patients' MTP reflects swallowing function, and specifically confirmed that the tongue pressure is reduced early on.

The correlation of MTP with disease duration showed multiple outliers. This may be because the onset of bulbar weakness or dysphagia in SBMA varies (6). According to the previous study, the association between MTP and disease duration was not necessarily related in patients without subjective dysphagia, which may also explain the outliers (22). Although the correlations of MTP with the bulbar subscore of the ALSFRS-R and the 6MWT were significant, they were weak. The bulbar subscore of the ALSFRS-R consists of three items: speech, drooling, and dysphagia. These functions are related to tongue strength; however, much more diverse factors are involved. Also, as can be seen from the scatter plot, the bulbar subscores of the participants were all nine or more, indicating that most of the participants had mild deterioration of bulbar function. This may have led to the weak correlation. The deterioration degree of bulbar function and overall muscle strength may not match in some patients, and this variability of phenotype may have contributed to the weak correlation between the MTP and the 6MWT.

Swallowing evaluations such as VFSS or fiberoptic endoscopic evaluation of swallowing (FEES) require expensive facilities and highly trained specialists. Hospitals equipped with such facilities are not common; therefore, such facilities are often located at long distances from patients' residences, which makes it difficult for SBMA patients to visit hospitals regularly. VFSS poses a risk of radiation exposure, FEES can cause discomfort when the endoscope is inserted into the nostril, and neither can avoid the risk of aspiration (29, 30). On the other hand, tongue pressure assessment is a safe and easy tool without radiation exposure or discomfort. Moreover, unlike VFSS and FEES, which are qualitative evaluations, tongue pressure assessment is a quantitative method, not requiring experts to interpret.

This study had several limitations. First, this study did not enroll a control group. In a recent study, MTP was measured using TPS-100 in community-dwelling older adults aged 65 years or more (31). Although the study participants were older than our study participants, they had an average MTP of 36.55 ± 3.29 kPa, which was higher than our study's average MTP of 24.0 ± 8.4 kPa. This was higher than the mean MTP of 26.99 ± 9.27 kPa in patients without subjective dysphagia in our study participants. This indirect comparison suggests that the MTP of SBMA patients may be lower than in normal subjects. Second, the study population consisted of patients within only one university hospital, which limits the generalizability of the results. Third, the sample size was relatively small because SBMA is a rare disease (32). Despite the limitations, the present study indicates the clinical usefulness of tongue pressure evaluation in patients with SBMA. Further long-term, multicenter study is recommended.

MTP was significantly associated with objective confirmed findings of dysphagia severity. Moreover, it reflected activities of daily living and gait function in patients with SBMA. Therefore, tongue pressure assessment can be used as a safe and easy tool to assess the swallowing function of SBMA patients, with the potential to monitor disease progression.

The studies involving human participants were reviewed and approved by the Institutional Review Board of Kyungpook National University Chilgok Hospital. Written informed consent for participation was not required for this study in accordance with the national legislation and the institutional requirements.

This work was supported by the Dong-A University research fund.

Copyright © 2021 Gwak, Jung, Min, Park, Cho, Park, Hong and Kang. This is an open-access article distributed under the terms of the Creative Commons Attribution License (CC BY). The use, distribution or reproduction in other forums is permitted, provided the original author(s) and the copyright owner(s) are credited and that the original publication in this journal is cited, in accordance with accepted academic practice. No use, distribution or reproduction is permitted which does not comply with these terms.