Objectives: To study the differential diagnosis of HIV-infected patients with suspected central nervous system (CNS) infections and the association of CD4 counts with the final diagnosis.

Methods: We analyzed HIV-infected patients from a prospective cohort study on the diagnostic accuracy of clinical and laboratory characteristics in adults with suspected CNS infections in an academic hospital in Amsterdam, the Netherlands, who underwent cerebrospinal fluid (CSF) examination.

Conclusions: Half of the patients with suspected CNS infections are diagnosed with a CNS infection, and this was not related to CD4 counts. The best predictor for CNS infections was the CSF leukocyte count.

Human immunodeficiency virus (HIV) is a neurotrophic, neuroinvasive, and neurovirulent pathogen (1), which can cause direct infection of the central nervous system (CNS) but also predisposes to a variety of other neuroinfections through impaired T-cell mediated immunity (2–4). It has been estimated that in the era before the introduction of combination antiretroviral therapy (cART), around 10% of HIV-infected patients initially presented with neurological disorders, and 30–50% of them developed neurological complications during the progression of their disease (5). Although recent large observational cohorts of HIV-infected patients have reported a significant decrease in the overall incidence of the most frequent HIV-associated neurological disorders in the cART era (6, 7), CNS infections have remained an important cause of morbidity and mortality (8).

Diagnosis of CNS infections in HIV-infected patients can be challenging as a variety of conditions should be considered in the differential diagnosis, and it may be caused by a broad spectrum of pathogens with diverse and overlapping clinical manifestations (9). The cause of CNS infections in HIV have been related to the CD4 lymphocyte count, of which a value below 200 has been described to predispose to cerebral toxoplasmosis, progressive multifocal leukoencephalopathy (PML), and cryptococcal meningitis (10, 11). HIV patients with higher CD4 counts, on the other hand, are expected to be infected with non-opportunistic pathogens (9). A number of studies have reported the spectrum of CNS infections in patients with a low range of CD4 count (7, 12–14), but the distribution of various CNS infections has not addressed in HIV-infected subgroups with a higher range of CD4 count.

We describe a population of HIV-infected patients included in a prospective study on the diagnostic accuracy of clinical and laboratory characteristics in patients with suspected CNS infections. We analyzed the causes of CNS infections, the differential diagnosis, and the association of CD4 counts with the final diagnosis.

We studied HIV-positive patients over 16 years included in a cohort of patients with suspected CNS infections in an academic hospital in Amsterdam, the Netherlands, who underwent CSF examination. The methods have been described in detail previously (15). Data collection regarding past medical history, clinical characteristics on presentation, and results of ancillary investigations including blood and CSF analysis, microbiological examinations, and imaging studies was done using online case record forms.

The final diagnosis was classified by two researchers based on all available clinical data, including microbiological examination of CSF. The classification was performed sorting each diagnosis into one of the following five categories: (1) CNS infection, (2) nervous system inflammation without infection, (3) non-infectious non-inflammatory neurological disorder, (4) non-neurological infection, and (5) other systemic disorder. Outcome was scored using the Glasgow outcome score (GOS). A favorable outcome was defined as a score of 5, and an unfavorable outcome was defined as a score of 1–4.

Continuous data were described with medians and interquartile range and categorical variables with frequency and percentage. The Mann–Whitney U-test was used for continuous variables, whereas Fisher's exact test and chi-square tests were used for categorical variables, as appropriate. The area under the curve (AUC) was measured using the receiver operating characteristic curve (ROC). A p-value < 0.05 was considered as statistically significant. The study was approved by the medical ethical committee of the Academic Medical Centre, Amsterdam, the Netherlands. 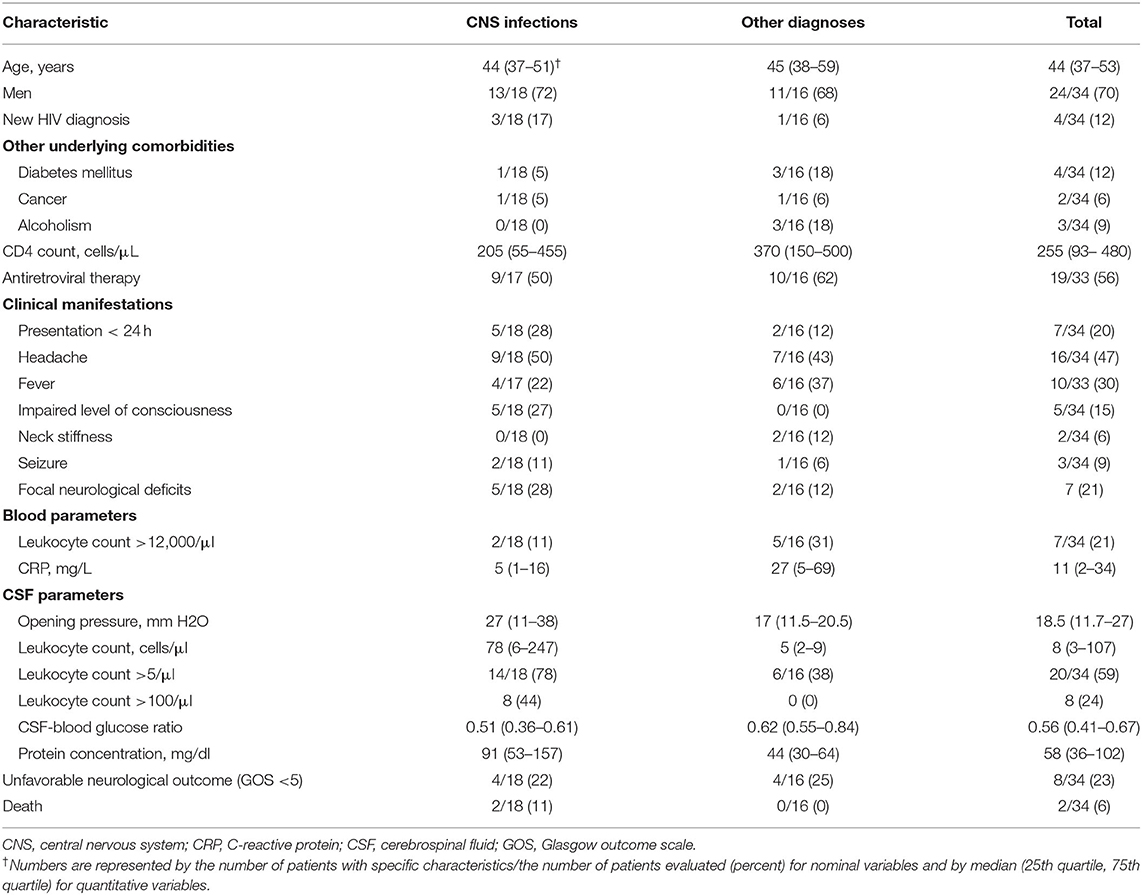 The spectrum of CNS infections included PML in three (17%) cases; cryptococcal meningoencephalitis, toxoplasma encephalitis, angiostrongylus eosinophilic meningitis, and HIV encephalitis each in two (11%); and cytomegalovirus encephalitis, syphilitic meningitis, tuberculous (TB) meningoencephalitis, histoplasma encephalitis, and varicella-zoster virus (VZV) meningitis each in one (6%). Final diagnoses were microbiologically confirmed in all but two patients, which were classified diagnosed as probable viral CNS infection by the assessors. Both of them were on cART and had a CD4 count of more than 200/μl. Two patients who were diagnosed with Angiostrongylus cantonensis eosinophilic meningitis were young, male, and on cART and had relatively high CD4 counts (430 and 1,020/μl) and marked CSF pleocytosis (441 and 814/μl). In three (16%) patients who were diagnosed with cerebral toxoplasmosis, cryptococcal meningitis, and neurosyphilis, the CNS infection was their first manifestation of HIV infection (Tables 2, 3). 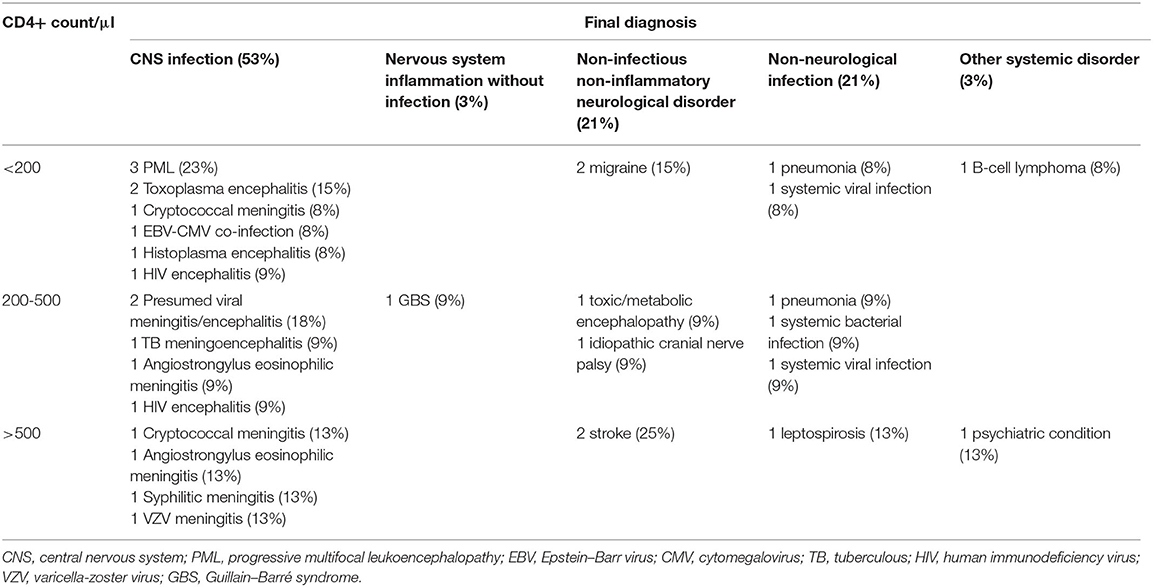 Table 2. Final diagnosis based on CD4 counts in HIV-infected patients and associated pathogens in episodes of central nervous system infections. 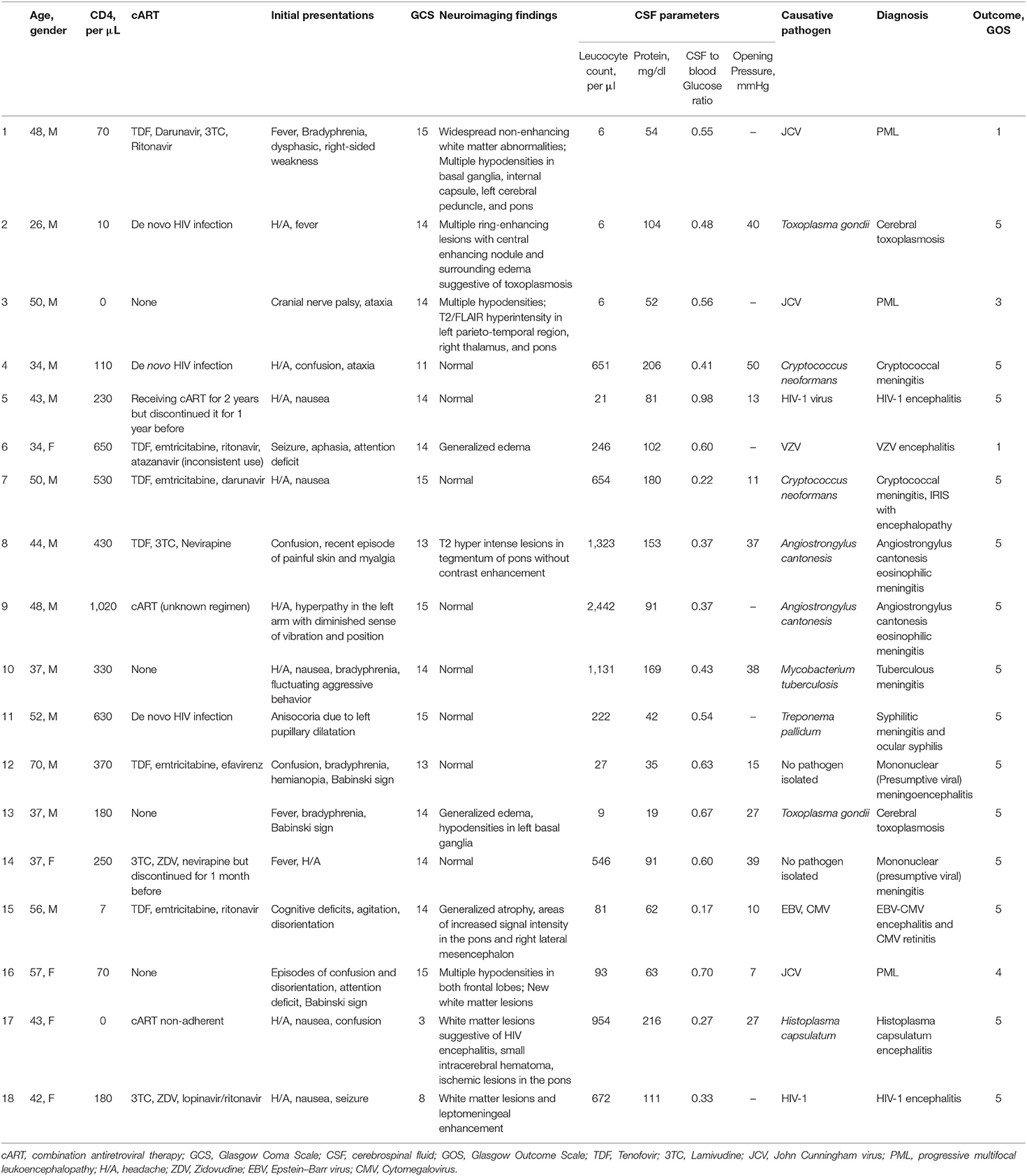 Overall, 8 of 34 (24%) patients had an unfavorable outcome, 4 in each group of CNS infection and other diagnoses (22 and 25%, respectively). Of these, two (11%) patients with CNS infections died. The causes of death were nosocomial sepsis and post-anoxic encephalopathy following resuscitation, and were deemed to be not related to the CNS infection.

We found that CNS infections in HIV-infected patients had many different causes, of which most were opportunistic pathogens, even though the CD4 count was relatively high. This finding, despite a relatively high median CD4 count in our patients, could be partly attributed to unmasking of occult opportunistic infections as a result of immune reconstitution inflammatory syndrome (IRIS) in HIV-infected patients. Unmasking IRIS is manifested by a robust, inflammatory immune response against the infective pathogen while deteriorating the clinical condition of the patient who recently started taking cART and was previously unable to respond to the opportunistic infection because of immunosuppression (22).

We identified a broad range of causative pathogens. PML, cryptococcal meningoencephalitis, and cerebral toxoplasmosis were the most common opportunistic neurological infections. Studies from other European countries, including Spain (16), France (10), and the United Kingdom (25), also reported similar findings and identified these three opportunistic infections among the four most common causes of CNS involvement in HIV-infected patients. However, the population of HIV-infected individuals in these studies had lower CD4 counts, as compared with our cohort. Although tuberculous meningoencephalitis has been reported as one of the most frequent causes of neurological syndromes in HIV-infected patients in the countries endemic for tuberculosis (7, 12, 19, 20, 26–29), it was diagnosed in only one of our patients.

Our study had several limitations. First, the number of HIV-infected patients in this study is relatively small, which makes it difficult to draw firm conclusions about the spectrum of HIV-infected patients with CNS complications. Second, only patients who underwent lumbar puncture were included in the study. As a result, we did not study HIV-infected patients whose diagnoses were confirmed by stereotactic or open surgical biopsy or were not candidate for lumbar puncture. This may influence the frequency distribution of the diagnoses because neurological disorders that manifest as single or multiple CNS mass lesions may require brain biopsy for confirmation of the diagnosis. However, recent advances in neuroimaging and molecular-based laboratory tests on CSF have increased the yield of diagnostic tests in patients with CNS infections, decreasing the need for more invasive diagnostic procedures (33).

In conclusion, half of the patients with suspected CNS infections are diagnosed with a CNS infection. While the CD4 count is not a good predictor for diagnosis of CNS infection vs. other diagnosis in HIV-infected patients, CSF white cell counts are essential in making the diagnosis. Therefore, if a CNS infection is suspected, cerebrospinal fluid examination is indicated in all patients in whom lumbar puncture can be performed safely (34).

The studies involving human participants were reviewed and approved by the Medical Ethical Committee of the Academic Medical Centre, Amsterdam, the Netherlands. The patients/participants provided their written informed consent to participate in this study.

FS: performed the research, analyzed the data, and wrote the first draft of the paper. FS, DB, and MB: designed the study and have read and approved the final manuscript. DB and MB: revised the paper. All authors contributed to the article and approved the submitted version.

This work was supported by the Netherlands Organization for Health Research and Development [ZonMw; NWO-Vidi Grant (917.17.308) to MB].

Copyright © 2021 Sheybani, van de Beek and Brouwer. This is an open-access article distributed under the terms of the Creative Commons Attribution License (CC BY). The use, distribution or reproduction in other forums is permitted, provided the original author(s) and the copyright owner(s) are credited and that the original publication in this journal is cited, in accordance with accepted academic practice. No use, distribution or reproduction is permitted which does not comply with these terms.