Motor and Non-motor Symptoms Associated With Exercise Behavior in Parkinson's Disease Patients: Factors Differ Between Patients With and Without Postural Instability

Background: Exercise is an important treatment for Parkinson's disease (PD). Therefore, recognizing determinants of exercise behavior for PD based on disease stage is essential. We sought to find whether the determinants differ based on presence of postural instability (PI), which is indicative of disease stage in PD.

Methods: We enrolled patients at Samsung Medical Center from September 2019 to November 2020, who had the ability to perform exercise [modified Hoehn and Yahr (HY) stage ≤ 3]. All the motor and non-motor symptoms were investigated. The exercise of the PD patients was evaluated using the Physical Activity Scale of the Elderly (PASE)-leisure score. We classified patients into PD without PI (HY stage 1 – 2) and PD with PI (HY stage 2.5 – 3) groups. Multivariate linear regression was performed using backward elimination in each group to determine factors associated with PASE-leisure score.

Conclusion: Different motor and non-motor symptoms were associated with the exercise in PD patients with and without PI. When encouraging PD patients to exercise, personalized and different strategies should be applied based on the presence of PI.

Exercise as a treatment for Parkinson's disease (PD) is becoming primary, rather than supplementary, in the management of PD patients. In many studies, higher level of physical activity and regular exercise were associated with less progression of motor and cognitive dysfunction in PD patients (1, 2). Furthermore, physical inactivity is associated with greater complications such as aspiration pneumonia or bedsores in advanced PD (3). Therefore, inspiring and motivating PD patients to engage in exercise could play an important role in improving their prognosis. First, clarifying determinants of exercise behavior in PD patients is necessary. In normal elderly population studies, self-efficacy, educational level, and other psychiatric perspectives were reported as determinant factors; however, consensus is lacking (4).

In particular, postural instability (PI), which develops as the disease progresses, significantly contributes to both physical inactivity and decreased ADL compared with other motor symptoms (5, 10). Consequently, advanced PD patients who have PI have different exercise behaviors and determinants from those without PI. Therefore, using a different strategy to encourage exercise based on the presence of PI in PD patients would result in better exercise behavior and prognosis. In the present study, the specific motor or non-motor symptoms of PD that could determine exercise behavior and whether those determinants would differ between PD without PI and PD with PI groups were investigated.

Regarding motor symptoms, Unified Parkinson's Disease Rating Scale (UPDRS) part 3 during “on” state (11), UPDRS part 4, and Freezing of Gait Questionnaire (FOGQ) (16) were assessed in each patient.

The exercise behavior of the PD patients was evaluated using the Korean version of the Physical Activity Scale of the Elderly (PASE) (23–25), a validated, self-reported questionnaire assessing the frequency, intensity, and duration of activity over the prior week. The PASE is composed of three sections (leisure exercise, work/volunteering, and household chores), and higher PASE scores indicate greater physical activity, with scores ranging from 0 to 365 in the validated sample. The leisure exercise (PASE-leisure) section includes all types of sports activity; only the PASE-leisure score was used in the present study for exercise analysis.

Data are presented as mean ± standard deviation (SD) or number (%). Demographics and clinical data were compared between PD with PI and PD without PI groups using Student's t-test or Mann-Whitney U test for continuous variables. To determine a model with factors that explains PASE-leisure score, multivariate linear regression analyses were performed in PD with PI and PD without PI groups. All variables were included in the multivariate linear analysis, and backward elimination was performed; the reference for elimination was when F probability was or/and above 0.1 and reference for entrance was when F probability or/below 0.05. The backward elimination was done until all the factors satisfied the reference value for the F probability and had significant p-value (< 0.05) in the model. All demographic parameters in this study were previously reported to be associated with exercise behavior. The variance inflation factor (VIF) among the variables was calculated to detect multi-co-linearity in multivariate analysis. All p-values and 95% confidence intervals (CIs) for the odds ratio (OR) were corrected using Bonferroni's method due to multiple testing after controlling for potential confounders. IBM SPSS Statistics for Windows (Version 27.0. IBM Co.; Armonk, NY, USA) and SAS version 9.4 (SAS Institute, Cary, NC, USA) were used for statistical analyses.

A total of 233 PD patients was enrolled. The mean age was 67.7 ± 8.75 years and 114 (48.9 %) were males. Among subjects, 177 had PD without PI and 56 had PD with PI. The subject demographics, clinical characteristics, and exercise characteristics are summarized and compared in Table 1. All the motor symptom-related scores including UPDRS parts 3 and 4 and FOGQ were significantly higher in the PD with PI subjects. The Activities-Specific Balance Confidence (ABC) score was significantly higher in PD without PI subjects. Regarding non-motor symptoms, total NMSS, SCOPA-AUT, and PDSS scores were significantly different between the two groups. Demographics of disease duration, MMSE, comorbidities, and employment status were significantly different between groups. PD without PI subjects showed higher PASE-leisure score than PD with PI subjects but without statistical significance (p = 0.052). 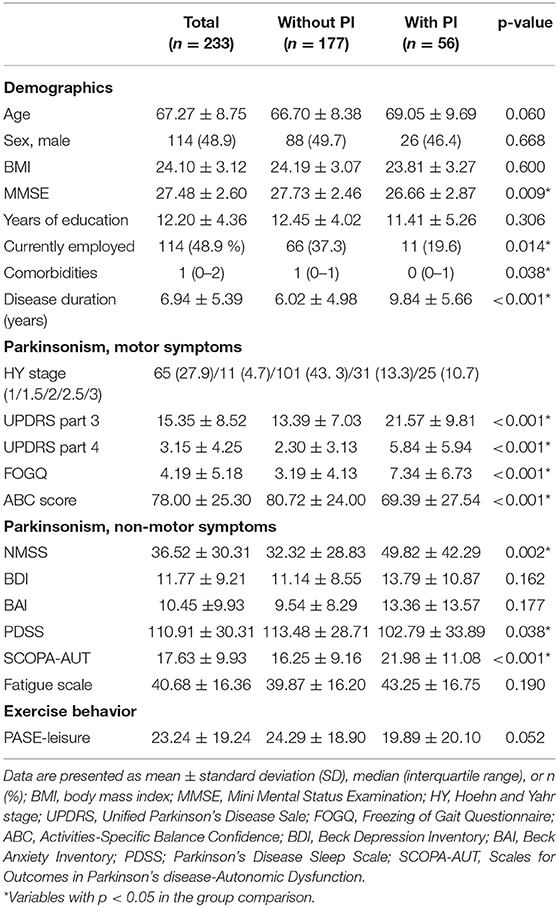 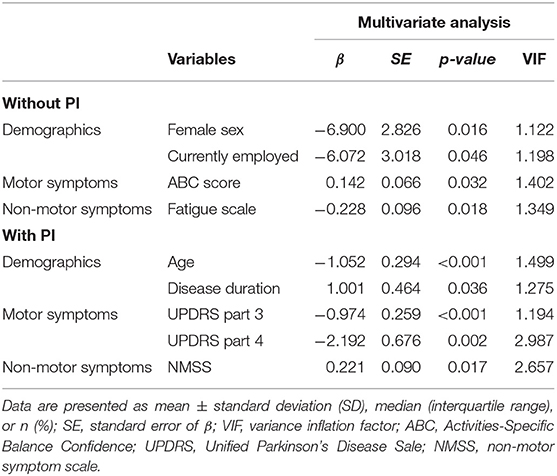 In PD without PI patients, the positive predictor was self-confidence in postural stability (ABC score), which is modifiable. Therefore, early intervention to increase confidence of postural stability in early PD would result in better exercise behavior and improved prognosis in the entire PD population. PD patients who have discrepancy between objective PI and ABC score (26) would benefit most from exercise resulting in improved prognosis. The negative predictor in PD without PI patients was fatigue, which is considered one of the most disabling non-motor symptoms in PD, manifesting in the beginning of the disease and lowering the quality of life (27). Therefore, assessing and managing fatigue specifically is important for improving quality of life and modifying exercise behavior, which can lead to better prognosis.

In PD with PI patients, “on” state motor symptoms (UPDRS part 3, 4), which likely cannot be modified, were negative determinants of PASE-leisure score. Advanced PD patients with PI suffer severe motor symptoms or motor fluctuations, which are challenging to manage with pharmacological intervention. Therefore, motor symptoms are more likely to affect both the motivation to exercise and maintenance of exercise in advanced PD than in early PD. Notably, NMSS was a positive predictor of PASE-leisure score in PD with PI patients. A possible explanation is that non-motor symptoms usually do not respond to pharmacological treatment in PD patients, and exercise is an alternative solution. Many patients report relief of various NMSS after exercising, although the effect can be transient (28–30), which could motivate patients to exercise.

Regarding socioeconomic determinants, currently employed status was a negative determinant in PD without PI patients, which could be explained by lack of time to exercise and fatigue from working. This is concerning for PD patients under 65 years of age who are part of the productive population and mostly working. Female gender was another negative predictor of exercise in PD without PI patients, which is a similar result to a previous study with healthy elderly subjects; females showed significantly lower PASE-leisure score than males (23, 25, 31). Female PD patients, had less opportunity for the education in Korea of 1950s and 1960s compared to male patients. Considering educational years was reported to be a positive factor of exercise amount in a study in normal elderly (4), our study's result is comprehensible. Also, in Asian culture, female is the main gender who does the most of housework. Naturally, as a female, it is hard to have time to exercise like currently employed people are. Stronger encouragement for exercise in those patients is needed.

The result of the present study may show the importance of early intervention to change exercise behavior in early PD patients without PI. Exercise behavior of PD with PI patients is affected mainly by disease-related factors such as general motor and non-motor symptoms and disease duration, which is relatively unmodifiable. Conversely, in PD without PI patients, exercise behavior is affected by self-confidence in postural stability, fatigue, and employment status, which are modifiable. Therefore, early management of those factors to encourage exercise in early PD patients is needed for better prognosis.

The present study had several limitations. First, due to the cross-sectional design, the causation between factors mentioned and exercise behavior is suspected but not proven. Second, this was a single-center, single-ethnicity study that could show biased results associated with social status or ethnicity. In addition, the number of PD patients with PI was relatively small compared with that of patients without PI, which could decrease the power of analysis. However, the power was 0.974 (R2 = 0.331) when the multivariate regression model of PD with PI was statistically analyzed. Moreover, the proportion of the patients with PI and without PI of our study correspond with reported epidemiology of PD, which shows PD with PI is almost one third of patients without PI (32). Third, patient reports were used to investigate exercise behavior, which have the risk of reporting and recall biases. However, the PASE was used, which is a validated measurement of physical activity that has been shown to correlate well with objective measures of physical activity (23). We did not include the socioeconomic determinants such as income status and condition of marriage which can be related factors for exercise behavior. To investigate the accurate financial status of patients, we have to gather all the information about real estate, movables, as well as their family's financial status. In a clinical setting, investigation of income can be significantly inaccurate because physician should depend entirely on interview with patients, not on written data. Regarding marriage status, many patients were reluctant to open about their marriage status. Still, we included major socioeconomic factors like age, sex, educational background and employment status which has been reported to be associated with exercise behavior in previous studies. Finally, patients who had major psychiatric diseases requiring medical treatment were excluded, which limits the generalizability of the results for PD patients with more severe psychiatric problems.

In conclusion, when encouraging PD patients to exercise, strategies can differ based on the presence of PI; strengthening confidence of postural stability and relieving fatigue are important factors in exercise behavior of PD without PI patients. However, parkinsonism significantly affects exercise behavior in PD with PI patients. Therefore, for patients without PI, ensuring their postural stability while encouraging exercise in clinic would be a strategy. Also, regular exercise and gradual increment in intensity of exercise should be recommended. On the other hand, for patients with PI, best medical treatment that can lower the UPDRS part 3 and 4 as much as possible is required. Considering that there are symptoms which do not respond to medication (i.e., PI), recommending exercises that has lower risk of falling can be another strategy. Early intervention to modify the relatively modifiable factors in early PD without PI patients would lead to better exercise behavior and prognosis.

The studies involving human participants were reviewed and approved by Institutional Review Board (IRB) of Samsung Medical Center (IRB number: 2020-09-214). Written informed consent for participation was not required for this study in accordance with the national legislation and the institutional requirements.

We thank Dr. Si-Ho Kim for his help and general advice for this article.

Copyright © 2021 Song, Youn, Huh, Mun, Ahn, Lee, Shin and Cho. This is an open-access article distributed under the terms of the Creative Commons Attribution License (CC BY). The use, distribution or reproduction in other forums is permitted, provided the original author(s) and the copyright owner(s) are credited and that the original publication in this journal is cited, in accordance with accepted academic practice. No use, distribution or reproduction is permitted which does not comply with these terms.