Background: One-year risk of stroke in transient ischemic attack and minor stroke (TIAMS) managed in secondary care settings has been reported as 5–8%. However, evidence for the outcomes of TIAMS in community care settings is limited.

Methods: The INternational comparison of Systems of care and patient outcomes In minor Stroke and TIA (INSIST) study was a prospective inception cohort community-based study of patients of 16 general practices in the Hunter–Manning region (New South Wales, Australia). Possible-TIAMS patients were recruited from 2012 to 2016 and followed-up for 12 months post-index event. Adjudication as TIAMS or TIAMS-mimics was by an expert panel. We established 7-days, 90-days, and 1-year risk of stroke, TIA, myocardial infarction (MI), coronary or carotid revascularization procedure and death; and medications use at 24 h post-index event.

Conclusion: One-year risk of stroke in TIAMS participants was lower than reported in previous studies. Early implementation of antiplatelet/anticoagulant therapies may have contributed to the low stroke recurrence.

Transient ischemic attack and minor stroke (TIAMS) account for up to 58% of all cerebral ischemic events (1, 2). Although recurrent vascular event rates post-TIAMS have been declining over the past two decades (3, 4), 5–8% of patients have disabling stroke, 1.1–1.3% have coronary artery events, and 0.6–0.7% die from cardiovascular causes in the year following TIAMS (5–7). Short-term dual antiplatelet therapy (DAPT) is the current gold standard for secondary prevention in high-risk TIAMS patients with non-cardioembolic sources (8). For those with atrial fibrillation, non-vitamin K antagonist oral anticoagulants (NOACs) are indicated as the first line therapy (9).

In the INternational comparison of Systems of care and patient outcomes In minor Stroke and Tia (INSIST) study (11), we aimed, (a) to establish rates of stroke, TIA, myocardial infarction (MI), and death post-index event for TIAMS and TIAMS-mimic groups recruited from primary-care population and, (b) to compare recurrence rates of stroke and TIA between both groups, and (c) to document antiplatelet and anticoagulant treatments in both groups pre-index event, at 24 h post-index event, and after 1 year.

• Suffered a possible TIAMS during the study period.

• Attended one of the participating practices.

We recruited consecutive patients between August 2012 and August 2016 from general practices in Hunter-Manning valleys regions of New South Wales, within the referral territory of acute neurovascular clinic at John Hunter Hospital (referral centre of Hunter New England Local Health District). Patients attended one of 16 general practices, of which 11 were in urban and five were in rural areas. Patients' eligibility was ascertained by multiple overlapping methods involving clinical records of general practices, after-hours GP service, the acute neurovascular clinic and emergency departments. The study population was possible TIAMS patients engaged with health systems at primary or secondary levels. While Australian evidence-based guidelines recommended optimal management of TIAMS to be urgent referral to acute specialist neurologist/stroke care (12), local practice was known to involve some TIAMS care being solely provided by GPs. Models of care included contributions from GPs, Emergency Departments, a dedicated Acute Neurovascular Clinic, inpatient admission, and specialist physicians or surgeons.

INSIST wasn't a community incidence study with ascertainment of all events (it didn't include events not presenting to medical care). Potential participants were recruited by invitation letters from the participating practices.

Participants underwent a baseline interview, and follow-up interviews at three- and 12-months post-baseline assessment. Further data were collected from medical records at the study conclusion. Patients not consenting to participation (non-responders) had de-identified outcome data collected, including subsequent TIA, stroke, MI, coronary or carotid revascularization and death at 12 months.

An expert panel adjudicated the index events and subsequent events as stroke, TIA, or TIAMS-mimic using data from phone interviews and examination of GP clinical records including imaging findings. Determinations were blinded and cross-referenced with the Hunter Region Heart and Stroke Register (13). The panel consisted of three clinicians; experienced stroke physicians (CRL, HZ, CG-E) and GPs (PM, MS, AD), with at least one of each at meetings. TIAMS and TIAMS-mimic groups were defined based on the index event adjudication.

Rates of the six events: subsequent stroke, TIA, MI, coronary or carotid revascularization and death within 7 days, 90 days, and 1 year, with 95% confidence intervals, were each estimated using the Kaplan-Meier (KM) estimator (6 events × 3 time points = 18 estimates). For subsequent stroke and TIA (considered separately), the time to event was compared between TIAMS and TIAMS-mimic group participants using log-rank tests. For participants who did not have a subsequent stroke or TIA within the defined study time, their survival time was right censored at final follow-up.

Time from symptom onset to commencement or enhancement of antiplatelet or anticoagulant drugs was summarized using median with interquartile range. All statistical analysis was performed using STATA 15.0 (Stata Corp, Texas, USA) with significance level set at 0.05. 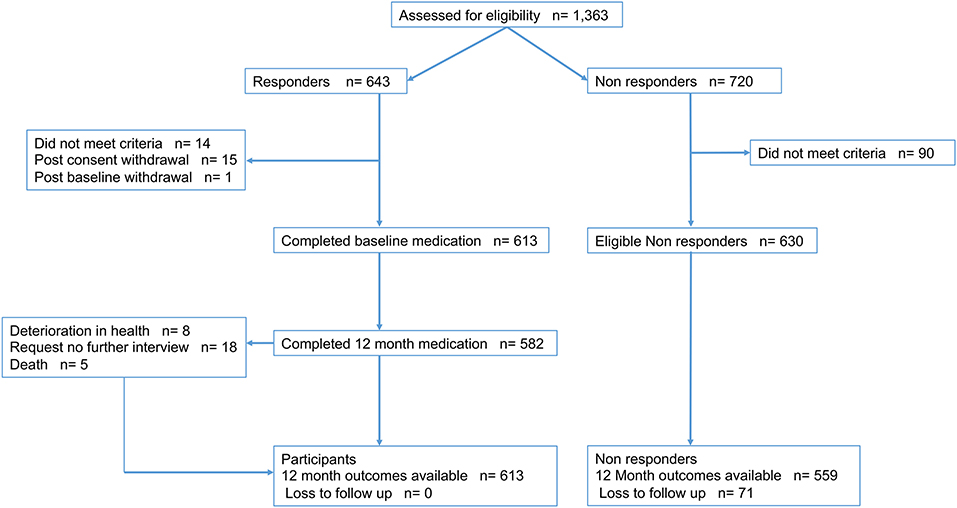 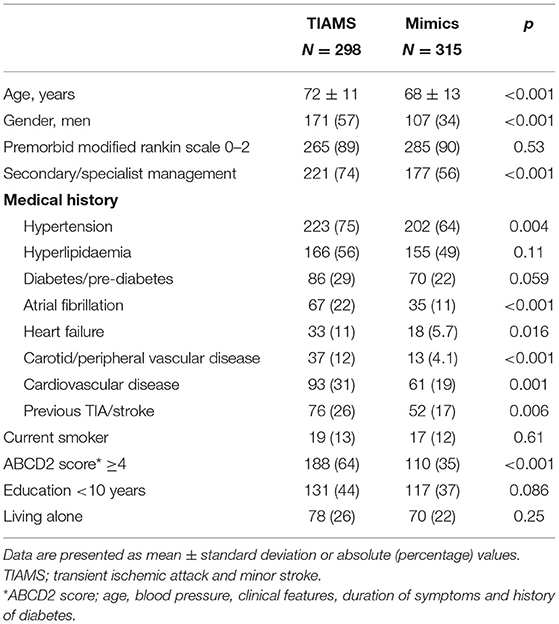 INSIST was an observational study of unselected patients of general practices including patients exclusively managed in general practices—but the proportion of participants with stroke recurrence appeared comparable or lower with those of study populations managed in secondary/specialist clinics [2.1% at 7-day (5), 1.2% (16), 2.1% (17), and 3.7% (5) at 90-day, and 5.1% at 1 year (5)].

We can hypothesize several reasons for the lower recurrence rate, but the most compelling is the prompt institution of antiplatelet/anticoagulant therapy post-index event. This was particularly so for aspirin in early post-TIAMS period (18). Time from symptom-onset to the therapies (median 9.5 hours [IQR 1.8–89.9]) was shorter than previously reported; time from seeking medical-attention to first-prescription (median 1 day [IQR 0–3]) (19). High community awareness in our study region may have led to the rapid treatment for TIAMS patients. National Prescribing Service MedicineWise Stroke Prevention Program implemented across Australia in 2009–2010 (20) might be correlated with high TIAMS awareness in GPs.

Another consideration is that our study population may have included TIAMS with better prognoses than previous studies. However, more than 60% of our TIAMS participants had an ABCD2 score ≥ 4, which was similar in the TIAregistry.org project (5) where systems were dedicated to urgent specialist evaluation. In the Framingham study with comprehensive community ascertainment of incident TIAs (4), 5.9% of participants at 90-days and 7.6% at 1-year had strokes. This suggests that TIAs with good prognoses being more likely to be managed in primary than secondary care, is unlikely to be a factor in our findings. The low incidence of stroke in non-responders suggests that our study did not lack TIAMS patients with poor prognoses at the enrolment.

Our findings provide further insight into GPs' approach to possible TIAMS. Aspirin in the TIAMS-mimic group at 24-h post-event was comparable to the TIAMS group. There was no corresponding increase in DAPT or anticoagulant use. GPs recognize that TIAMS is a medical emergency and differentiation of TIAMS and TIAMS-mimics is difficult. Therefore, if GPs can't exclude TIAMS, they may elect a “minimalist” approach of aspirin-only management rather than DAPT (though noting that for much of our study period DAPT was not yet guideline-recommended). Aspirin use for TIAMS/TIAMS-mimics may represent a liberal instance of recommended urgent prescription at diagnosis for suspected TIA (21).

INSIST was a comprehensive community-based study, reflecting real-world TIAMS management by clinicians including exclusive management by GPs. Overlapping means of TIAMS/TIAMS-mimics ascertainment was rigorous. With 16 participating GP practices, including urban and rural settings, the results are broadly generalizable to the Australian general practice setting and to other health systems where GPs are gatekeepers to secondary care. There are several limitations. The response rate of 47% was modest, but it is a reasonable response rate for cohort studies (22). And we collected de-identified outcome data for non-responders. Medication data after 1 year was missing in 31 participants, however outcome data was complete. Reported HRs represented univariable estimates only because the event count was low, and we did not include any adjustment variables in the Cox model.

Australian guidelines recommend urgent specialist-care for suspected TIAMS at high risk (12). TIAMS outcomes in our study were favorable even with 26% of TIAMS participants managed solely by GPs. 35% of TIAMS participants treated with aspirin alone at 24 h post-index event may reflect the then-current guidelines without evidence for DAPT. The majority of TIAMS-mimic participants treated with aspirin alone may reflect diagnostic uncertainty among GPs. Lack of full confidence in the diagnosis may deter introduction of DAPT and transfer to specialist/secondary care. Therefore, GP access to specialists may be desirable for diagnostic or management advice. Given multiple barriers to access to specialist-care (23), an appropriate response may be institution of TIAMS “rapid response” telehealth service (24, 25).

We have established the recurrent stroke and major vascular event rates after TIAMS in a regional community-based Australian healthcare setting. The recurrence rate appears to be comparable with other TIAMS cohorts from specialist/secondary care settings. Rapid prescription of new or additional antiplatelet/anticoagulant drugs may have contributed to the low recurrence rate. However, our data suggest scope for improvements in the immediate management of TIAMS in the Australian regional healthcare setting.

The studies involving human participants were reviewed and approved by Hunter New England Human Research Ethics Committee. The patients/participants provided their written informed consent to participate in this study.

The INSIST study was funded by NHMRC Project Grant ID 1027794.

The handling editor declared a shared affiliation with author PR at time of review.

We would like to thank Debbie Quain for data collection and Carl Holder for data analysis.

Copyright © 2021 Tomari, Levi, Holliday, Lasserson, Valderas, Dewey, Barber, Spratt, Cadilhac, Feigin, Rothwell, Zareie, Garcia-Esperon, Davey, Najib, Sales and Magin. This is an open-access article distributed under the terms of the Creative Commons Attribution License (CC BY). The use, distribution or reproduction in other forums is permitted, provided the original author(s) and the copyright owner(s) are credited and that the original publication in this journal is cited, in accordance with accepted academic practice. No use, distribution or reproduction is permitted which does not comply with these terms.