Persistent postural-perceptual dizziness (PPPD) is characterized by chronic dizziness and/or non-spinning vertigo, mainly in the upright position during standing or walking (1). PPPD is typically preceded by acute vestibular disorders. As non-spinning vertigo can be caused by disorders of the otolith organs, which senses linear acceleration (2–5), PPPD may be associated with otolith dysfunction rather than semicircular canal dysfunction. There have been some reports about otolith dysfunction in PPPD, which were based on vestibular evoked myogenic potential (VEMP) testing (6, 7), a clinical test of otolith organ function (5, 8). However, they did not focus on isolated otolith dysfunction; i.e., abnormal otolith function with preserved semicircular canal function.

Herein, we studied peripheral vestibular dysfunction in patients that had been diagnosed with PPPD using VEMP testing and the video head impulse test (vHIT), which is a clinical test of the semicircular canal, which senses angular acceleration (9, 10).

Twenty-one patients (6 males and 15 females) that had been diagnosed with PPPD according to the diagnostic criteria outlined by the Barany Society (1) were enrolled in this study. The ages of the subjects ranged from 26 to 81 (mean = 59.0). Subjects with external and/or middle ear problems were excluded.

Electromyographic (EMG) signals were recorded using surface electrodes placed on the upper half of each sternocleidomastoid muscle (SCM) (active), with a reference electrode placed on the lateral end of the upper sternum. While in the supine position, the subjects were asked to raise their heads to contract the SCM. The EMG signals were amplified and bandpass-filtered (20–2,000 Hz) using the Neuropack system (Nihon Kohden, Japan). Short tone bursts (500 Hz air-conducted, 125 dBSPL, rise/fall time: 1 ms, plateau time: 2 ms) were used for stimulation at a repetition rate of 5 Hz. The analyzed period was 100 ms long (20 ms before and 80 ms after the stimulus). The rectified EMG signals obtained during the pre-stimulation period were used to assess background muscle activity (16, 17).

The amplitude of p13-n23 (the first positive-negative deflection) and the latency of p13 were analyzed. The normalized amplitude (NA) was calculated as the p13-n23 amplitude divided by background muscle activity. Background muscle activity was calculated using rectified EMG signals obtained during the pre-stimulation period (−20 to 0 ms). Asymmetry ratios (AR) for the cVEMP were calculated as follows: AR = 100 × (NAl – NAs)/(NAl + NAs), where NAl represents the NA on the larger response side, and NAs represents the NA on the smaller response side. The upper limit of normal for the AR was set at 41.6 (16). The upper limit of normal for the p13 latency was set at 17.7 ms (p13) (16).

EMG signals were recorded using surface electrodes placed 1 cm below the center of each lower eyelid (active) and 2 cm below the active electrode (reference). During recordings, the subjects were instructed to maintain an upward gaze. Bone-conducted stimulation (500 Hz, rise/fall time: 1 ms, plateau time: 2 ms) was presented using a 4810 mini-shaker (Bruel & Kjaer, Denmark) placed on the Fz position at a repetition rate of 5 Hz. The peak driving voltage was adjusted to 8.0 V, which produced a peak force level of 128 dB (re: 1 μN). The signals were amplified and bandpass-filtered (20–2,000 Hz) using the Neuropack system. The raw amplitude of N1-P1 (the first negative–positive deflection) was analyzed. The upper limits of normal for the AR and N1 latency were set at 27.3 (AR) and 11.7 ms (N1 latency) (17).

The Eye-See-Cam system (Interacoustics, Denmark) was used for the vHIT. The patients were subjected to passive high-acceleration, low-amplitude head rotations in the planes of the lateral, right anterior-left posterior, and left anterior-right posterior semicircular canals (9, 10, 18). Each subject was seated 1.5 m in front of a target and asked to keep watching it as their head was passively rotated by the examiner. Their eye and head movements were measured using video-oculography and inertial sensors. The vestibulo-ocular reflex (VOR) gains that occurred during the testing (eye velocity/head velocity) were measured using software. When a mean gain during the vHIT (eye velocity/head velocity) of <0.7 for the vertical canals or <0.8 for the lateral canals was detected, the relevant canal was regarded to be functioning abnormally (10).

We used the Gravicorder GW-31 (Anima Co. Ltd., Japan) for the stabilometric recordings. It contains vertical force transducers, which can be used to measure instantaneous fluctuations in the center of pressure (COP). The stabilometric measurements were performed in both eyes-open and eyes-closed conditions for 60 s each. The positions of the subjects' feet and arms during the recordings were based on the standard Japanese methods (13). The subjects' feet were placed in the closed-parallel position, and their arms were extended laterally.

We obtained informed consent from each participant. This study was approved by the ethics committee of Teikyo University (TR20-078). 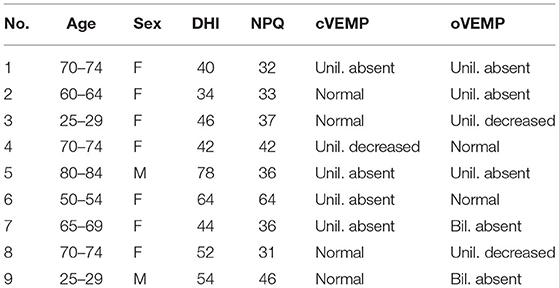 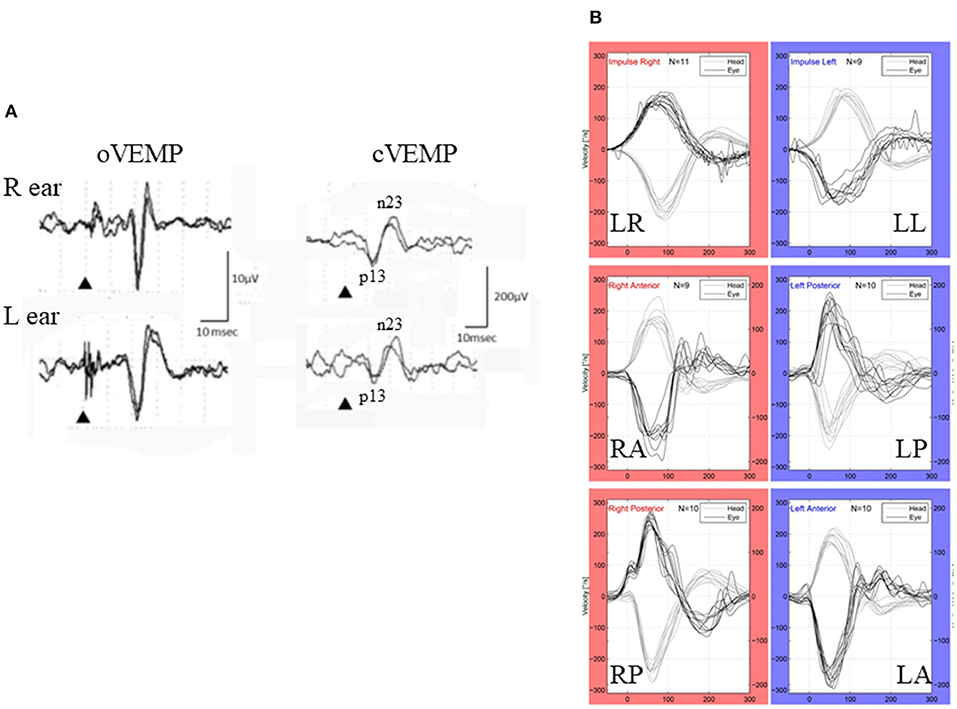 Figure 1. VEMP and vHIT (patient # 9, 25–29-year-old-male). (A) cVEMP and oVEMP. While he had normal cVEMP on both sides (right), he showed absence of oVEMP on both sides (left). Although he showed some positive-negative biphasic deflections with long latencies (>20 ms), they were not regarded as N1-P1 of the vestibular origin because of their reversed polarity and long latency. (B) vHIT. He showed normal responses to all the canals.

Among the 9 subjects with isolated otolith dysfunction, 2 exhibited bilateral abnormal responses, while 7 exhibited unilateral abnormal responses. Three of the 9 subjects with isolated otolith dysfunction showed both abnormal cVEMP and oVEMP responses. In 4 subjects, normal cVEMP were seen, but oVEMP were absent. On the other hand, in 2 subjects cVEMP were abnormal, but normal oVEMP were observed.

Precipitating conditions for PPPD are summarized in Table 2. Vestibular neuritis (VN) was the most frequent as precipitating condition (N = 7, 33.3%). The second most was idiopathic otolithic vertigo (OV) (N = 4, 19.0%). The diagnosis of OV was done according to symptoms in diagnostic criteria proposed by Sue et al. (19). 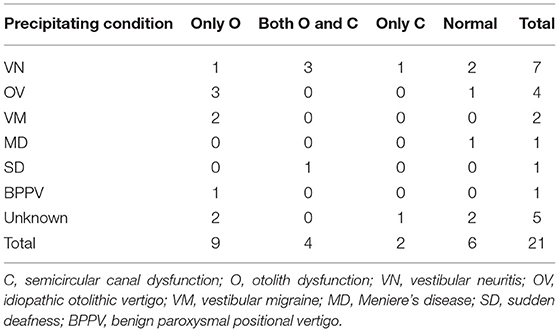 Comparison of Isolated Otolith Dysfunction Patients With Other PPPD Subjects

Comparisons of the outcome measures are shown in Table 3. None of the examined parameters exhibited significant differences by the subgroups (p > 0.05 Kruskal-Wallis test). The PPPD patient group (N = 21) showed significantly larger values of the examined stabilometric parameters than the 55–59-year-old healthy group (t-test p < 0.01) (11).

Table 3. Summary of questionnaires and stabilometry.

The main limitation of this study is that the size is small. Large-sized study should be performed in the future. Furthermore, while this study showed that OV could be a precipitating factor of PPPD, there is still remained to be clarified how often OV will proceed to PPPD. In this cross-sectional study, symptoms and sway measured with stabilometry do not differ between subjects with isolated otolithic abnormalities and others. In order to determine if otolithic abnormalities affect the prognosis of patients with PPPD a follow up study is required. Thirdly, precipitating factors of PPPD might be biased by the department or institute where patients were seen. While Waterston reported that anxiety was the most as a precipitating factor and the second most was vestibular migraine (20), in the present study VN was the most and OV was the second most. Interdisciplinary and international survey might be required.

The studies involving human participants were reviewed and approved by Teikyo University Ethics Committee. The patients/participants provided their written informed consent to participate in this study.

This study was supported by a Grant-in-Aid for Scientific Research (C) from the Japan Society for the Promotion of Science (19K09856).

Copyright © 2022 Murofushi, Nishimura and Tsubota. This is an open-access article distributed under the terms of the Creative Commons Attribution License (CC BY). The use, distribution or reproduction in other forums is permitted, provided the original author(s) and the copyright owner(s) are credited and that the original publication in this journal is cited, in accordance with accepted academic practice. No use, distribution or reproduction is permitted which does not comply with these terms.