Methods: The data of patients diagnosed with SAH at our hospital between September 2019 and December 2020 were retrospectively reviewed. Patients' information was collected, and serum vitamin D levels were measured. Computed tomography was performed to confirm SAH diagnosis, and digital subtraction angiography was performed to determine whether SAH was caused by rupture of an intracranial aneurysm. Multivariate logistic regression analyses were performed to investigate the association between vitamin D level and aneurysmal SAH.

Subarachnoid hemorrhage (SAH) is an acute neurological emergency with an overall fatality rate of 42% at 28 days. Altogether, 85% of SAH cases are caused by rupture of intracranial aneurysms. Aneurysmal re-rupture and second bleeds are associated with a mortality rate of 70–90% (1). Therefore, early identification and treatment of intracranial aneurysms can significantly improve the survival rate of patients with SAH.

Subarachnoid hemorrhage diagnosis is relatively easy on using computed tomography (CT) and laboratory analysis, such as cerebrospinal fluid (CSF) analysis (2). To further clarify the cause of bleeding, vascular imaging, including CT angiography (CTA) and digital subtraction angiography (DSA) are required to identify the presence of aneurysms. However, sometimes, the initial imaging examination findings of patients with an aneurysmal pattern of hemorrhage are negative (3). Therefore, the identification of indicators to prompt the cause of SAH is crucial.

Patients with SAH were retrospectively and consecutively enrolled at the Neurointerventional Department of the First Affiliated Hospital of Zhengzhou University (Henan, China) from September 2019 to December 2020. The following inclusion criteria were applied: (1) age ≥ 18 years; (2) hospitalized with a primary diagnosis of spontaneous SAH according to World Health Organization criteria, which was confirmed through brain CT within 7 days of symptom onset; and (3) no severe physical illnesses that were life-threatening or interfering with the stroke recovery evaluation. Patients who did not undergo CT or CTA/DSA imaging and those with rare causes of SAH such as cerebrovascular malformations, trauma, etc, were excluded.

The study protocol was approved by the Ethics Committee of the First Affiliated Hospital of Zhengzhou University. Informed consent for relevant examination and treatment were obtained from all patients or their legally authorized representatives.

Detailed baseline data were collected, including age, sex, hypertension, coronary artery disease (CAD), stroke, hyperlipidemia, diabetes mellitus, and medical history. Hypertension was defined according to the 2017 ACC/AHA/AAPA/ABC/ACPM/AGS/APhA/ASH/ASPC/NMA/PCNA Guidelines for the Prevention, Detection, Evaluation, and Management of High Blood Pressure in Adults: Executive Summary (9). Hypercholesterolemia and diabetes mellitus were defined according to the 2018 AHA/ACC/AACVPR/AAPA/ABC/ACPM/ADA/AGS/AphA/ASPC/NLA/PCNA Guidelines on the Management of Blood Cholesterol (10), and the American Diabetes Association criteria, respectively (11). Stroke was defined as a history of stroke. CAD was defined as a history of angina pectoris, myocardial infarction, or use of medication to control CAD. Smoking was defined as ≥10 cigarettes per day for >3 months; Drinking of alcohol was considered if it occurred at least once per week (≥ 500 ml) for more than 3 months.

Fasting blood samples were collected after an overnight fasting of at least 8 h for the measurement of serum calcium, phosphorus, creatinine, uric acid, cholesterol, and vitamin D levels on the morning of day 1 post admission.

Estimated glomerular filtration rate (eGFR), an estimate of the baseline kidney function, was calculated using the Modification of Diet in Renal Disease formula (12).

Statistical analysis was performed using SPSS software (version 23.0; SPSS, Inc. IBM Corp., Armonk, NY, USA). Numerical variables are described as mean ± standard deviation, and assessed with Student's t-test for independent samples. When the normality assumption was violated, Mann–Whitney U-test was used. Categorical variables were described by grouped data and percentages, and rates or percentages between the groups were compared using the χ2-test or Fisher's exact test. All factors associated with aneurysmal SAH from the univariate analyses at a threshold (p < 0.1) and age were included in the multivariate model as candidate variables and then removed by a forward selection procedure. Two-tailed tests with a probability (p < 0.05), were used to estimate statistical significance for multivariate logistic regression analyzes. 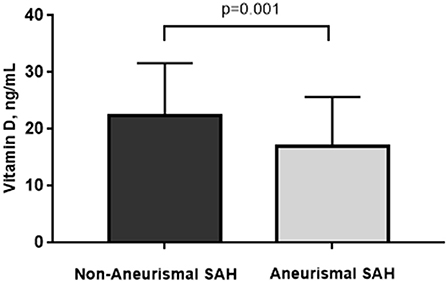 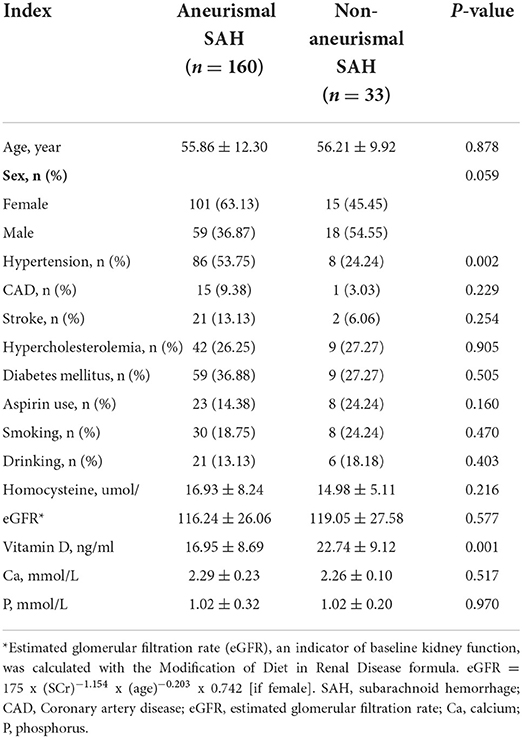 Table 1. Baseline characteristics and univariate determinants of the patients with SAH.

In addition, the study also observed that hypertension was associated with aneurysmal SAH, which has been identified in epidemiological studies. In a prospective population-based cohort, hypertension has been shown to be one of the most important risk factors for aneurysmal SAH (16). An animal model of aneurysm can be induced by a combination of hypertension and disruption of collagen synthesis (17). Researchers believe that the hemodynamic stress at the bifurcation site of the cerebral arteries and mechanical damage in the arterial wall caused by hypertension are the potential factors of intracranial aneurysms (18).

The strengths of our study are as follows. Firstly, to the best of our knowledge, this study is the first research to explore the relationship between vitamin D levels and aneurysmal rupture in patients with SAH. Secondly, a relatively large sample size of patients with SAH was included in the present study. The large sample size provided a considerable statistical power, which contributed to detect real differences of vitamin D level among patients with aneurysmal SAH and in those with non-aneurysmal SAH. Thirdly, in the non-aneurysmal SAH group, intracranial aneurysms or other rare causes such as cerebrovascular malformations were excluded by CTA or DSA repeatedly; therefore, our grouping conditions were strict and clear. Moreover, this study includes many factors related to vitamin D, such as calcium and phosphorus level, renal function and so on in the univariate analyses. All factors associated with aneurysmal SAH from the univariate analyses at a threshold (p < 0.1), especially sex, which was found to be associated with intracranial aneurysms and vitamin D levels, were included in the multivariate analyses in order to eliminate the interference of other factors. The conclusion is relatively convincing.

Of course, the study also had several limitations. First, the current study utilized a cross-sectional design; thus, a causal relationship between vitamin D levels and the aneurysmal SAH needs further confirmation using a longitudinal study. Second, the study was a single-center retrospective study, which inevitably resulted in selection bias. These results may be related to the patient group. In addition, owing to the small number of patients in the non-aneurysm group, subgroup analysis of patients with different causes was not possible.

The studies involving human participants were reviewed and approved by Ethics Committee of the First Affiliated Hospital of Zhengzhou University. The patients/participants provided their written informed consent to participate in this study.

We would like to thank the patients and normal controls for their participation in this study.

Copyright © 2022 Wei, Yuan, Li, Fan, Guo, Xu and Guan. This is an open-access article distributed under the terms of the Creative Commons Attribution License (CC BY). The use, distribution or reproduction in other forums is permitted, provided the original author(s) and the copyright owner(s) are credited and that the original publication in this journal is cited, in accordance with accepted academic practice. No use, distribution or reproduction is permitted which does not comply with these terms.