Cryptococcal meningitis, caused by cryptococcal infection of the central nervous system (CNS), is the most common fungal meningitis in clinical practice. Most patients present with characteristic manifestations of meningitis, including headache, fever, and vomiting (1). The disease typically has a high mortality rate and a poor prognosis (2). Cryptococcal meningitis primarily occurs in immunocompromised patients and is typically associated with human immunodeficiency virus (HIV) infection. Hodgkin lymphoma (HL) is also considered a risk factor, but the association of both conditions is relatively rare (3, 4).

HL is a hematological malignancy, composed by large dysplastic mononuclear and multinucleated cells surrounded by a variable mixture of inflammatory cells. Peripheral adenopathies are usually the first manifestation of HL. The disease is categorized as classic HL (cHL) or nodular lymphocyte-predominant HL (NLPHL) (5). The former is subdivided into 4 histologic subtypes (Nodular sclerosis cHL, Mixed-cellularity cHL, Lymphocyte-rich cHL and Lymphocyte-depleted cHL). Over 90% of the cases are cHL, which behaves as an aggressive tumor; however, lymphocyte-rich cHL manifests with indolent biological nature in most instances and can be effectively treated with modern combination chemotherapy regimens (5). Cryptococcus infection in patients with HL occurs at ~2.7% over 10 years and can lead to increased mortality (6).

Eosinophilic meningitis (EM), a disease characterized by increased eosinophils in the cerebrospinal fluid (CSF), is often caused by a parasitic infection of the CNS (7). EM caused by cryptococcal meningitis is rare. To our knowledge, only four cases have been reported in the past 30 years (8–11). A proportion of eosinophils as high as 91% presented in this case has not been reported, and such a high proportion may be associated with HL, which was reported to have a correlation with CSF eosinophilia as well (12–14).

Here, we report a case of cryptococcal meningitis in a patient with HL who presented with an atypical eosinophil-predominant CSF cytology response. After antifungal therapy and tumor chemotherapy, the proportion of eosinophils decreased significantly.

A previously healthy 20-year-old male patient presented with intermittent headaches, nausea and vomiting for 13 days, which had worsened in the previous 2 days. He also presented fever the day before the hospital admission. He took no regular medication. Physical examination revealed cervical rigidity, lymph node enlargements on the right side of the neck. Vital signs (body temperature, pulse rate, respiration rate, and blood pressure) were normal. Relevant laboratory tests and examinations were performed after admission. Complete blood count was normal (Hb 130 g/L, Leucocytes 3.9 × 109/L, with 1.4 × 109 lymphocytes/L, 1.6 × 109 neutrophils/L, 0.5 × 109 eosinophils/L, and 0.4 × 109 monocytes/L, and platelets 125 × 109/L), and the patient tested negative for HIV. Brain magnetic resonance imaging (MRI) revealed hyperintensity in the bilateral frontopolar and parietal cortex and sulcus. A lumbar puncture revealed elevated CSF opening pressure (>330 mmH2O), decreased glucose (1.19 mmol/L), elevated protein (0.96 g/L), and pleocytosis of 358 × 106 leucocytes/L (91% eosinophils, 4% lymphocytes, 4% monocytes, and 1% plasma cells) (Figure 1A). Alcian blue staining revealed Cryptococcus (Figure 1B), and the CSF culture grew Cryptococcus neoformans resistant to fluconazole. To search for the cause of eosinophilia, metagenomic next-generation sequencing (m-NGS) of the CSF was performed, and only Cryptococcus neoformans (sequence number: 1427) was identified; no parasites or other pathogens were found. The patient was diagnosed with cryptococcal meningitis on the basis of his clinical symptoms and signs combined with the presence of Cryptococcus in the CSF. The following examinations were performed to identify the cause of lymph node enlargements. Color Doppler ultrasound of the superficial lymph nodes revealed multiple lymph node enlargements in the bilateral neck, axilla, and right groin. Chest computed tomography (CT) showed multiple lymph node enlargements on both sides of the neck, mediastinum, and lung hilum. A biopsy of the cervical lymph node was performed, and the pathological diagnosis was lymphocyte-rich cHL. An 18F-FDG PET-CT was performed and documented hypermetabolic activity on supra- and infra-diaphragmatic adenopathies, spleen and bone, corresponding to the stage IV of the Lugano classification (15). CSF analysis by flow cytometry showed no malignant cells.

Treatment for HL may suppress immunity and thus aggravate cryptococcal infection, and lymphocyte-rich cHL has an indolent biological nature; therefore, we first administered antifungal induction therapy (liposomal amphotericin B plus 5-flucytosine) and performed successive lumbar punctures to control the high CSF opening pressure. After 8 weeks, the symptoms of meningitis significantly improved. The CSF leukocyte count (8 × 106/L) and proportion of eosinophils (42%) were reduced, and a CSF culture was negative. The patient thus initiated antifungal consolidation therapy with voriconazole and was transferred to the hematology department to start chemotherapy with the ABVD protocol (doxorubicin, bleomycin, vinblastine, and dacarbazine). At the present moment, the patient has received antifungal consolidation therapy for 13 weeks and 4 cycles of ABVD and he is asymptomatic. CSF culture is still negative, and the leucocyte count and proportion of eosinophils in the CSF have decreased gradually with treatment (Figure 2). 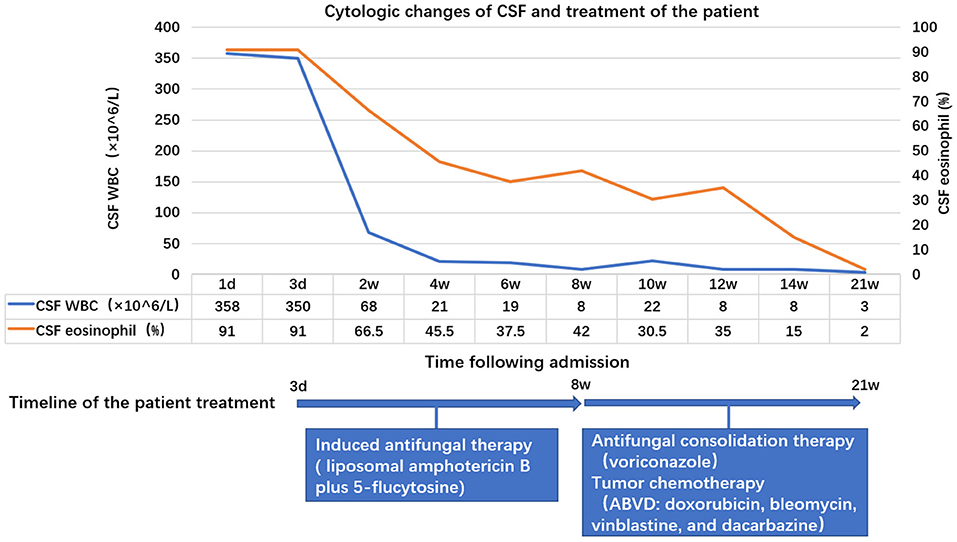 Cryptococcal meningitis primarily occurs in immunocompromised hosts, most commonly HIV-infected patients. Other high-risk patient groups include patients receiving immunosuppressive therapies, patients with malignant tumors (including HL), solid organ transplant recipients, and patients with rheumatic diseases (3, 4). Our patient was HIV seronegative, with no history of immunosuppressive drugs, and had no other diseases. The immunosuppression associated to the HL contributed for the Cryptococcus infection. Studies have shown that ~16–19% of cryptococcal meningitis patients without HIV have malignant neoplasms (16). A large retrospective review of 583 patients with cryptococcal infection associated with malignancies from 1970 to 2014 found that 52 (9%) cases were associated with HL (4).

Previous studies have shown that risk factors for cryptococcal infection in patients with HL include a history of HL of ≥12 months, stage IV disease, absolute lymphopenia in the peripheral blood, and extensive pretreatment with chemotherapeutic agents (6, 17). In this case, the patient had no history of malignancies, no decrease in lymphocyte count, and no chemotherapeutic treatment before infection. The only identified risk factor for cryptococcal infection was stage IV disease. Previous studies have also shown that the host's defense against cryptococcal infection mainly relies on T cell immunity (18). Compared with healthy individuals, the number of T cells in HL patients is reduced, and the proliferation ability of T cells is significantly decreased (19), which partially explains why HL patients present a higher risk to be infected with Cryptococcus.

In addition, it is critical to identify HL and cryptococcal lymphadenitis in patients with cryptococcal meningitis accompanied by multiple lymph node enlargements. The most common sites of Cryptococcus infection are the CNS and the lungs (20). However, many reports (20–22) have demonstrated that Cryptococcus can infect the lymph nodes and lead to cryptococcal lymphadenitis, of which the clinical manifestations are very similar to lymphoma, including lymph node enlargements in the neck, supraclavicular region, mediastinum, and groin as well as splenomegaly. Biopsy is the gold standard to distinguish these two diseases (21, 22). To exclude the presence of a HL or other malignancy, it is recommended to routinely perform a lymph node biopsy in all patients with cryptococcal meningitis and adenopathies.

Eosinophilic meningitis (EM) is defined by the presence of 10 or more eosinophils/uL in the CSF or eosinophilia of at least 10% of the total CSF leukocyte count (23). The etiology can be divided into infectious and non-infectious causes (7, 23). Parasitic infection is the most common form of infectious EM. Other rare pathogens include fungi, Streptococcus, coxsackieviruses, and Rickettsia. Among pathogenic fungi, Coccidioides is the most common, whereas Cryptococcus is relatively rare. Non-infectious factors include tumors, drugs, toxins, and ventriculoperitoneal shunts.

EM caused by cryptococcal meningitis is rare. As mentioned above, only four cases have been reported in the past 30 years (Table 1). All patients had a significant medical history: one patient had been submitted to thymectomy and combined irradiation and chemotherapy; one patient had had angioimmunoblastic T-cell lymphoma; one patient had asthma, perennial rhinitis, atopic dermatitis and high-dose steroid therapy; the other patient had sarcoidosis (8–11). The initial proportion of eosinophils in CSF of three patients was 50, 12, and 76%, respectively; exact data is not available for the other patient. Eosinophilia totally resolved after antifungal therapy alone in three patients. In the other case, the eosinophils in the CSF decreased from 76 to 64% after 8 days of antifungal therapy, but no further CSF data is available. In the case we now report, the eosinophils in the CSF decreased from 91 to 42% after antifungal therapy alone. No parasites or other pathogens were found, and the patient had no history of taking special drugs or toxins. Therefore, Cryptococcus infection was considered a possible cause of EM. In addition, the proportion of eosinophils was as high as 91% in our case, suggesting that other factors may have been involved in eosinophilia.

Table 1. Summary of the clinical cases of cryptococcal meningitis with CSF eosinophilia published in the last 30 years.

Current studies have shown that HL can cause peripheral blood eosinophilia with an incidence of ~15% (24). However, few studies have investigated the association between HL and CSF eosinophilia, except in the rare cases of HL meningeal invasion, which can present with EM (12–14). The diagnosis involvement of the meninges by HL relies on meningeal biopsy and detection of malignant cells in the CSF (13). In this case, the patient did not undergo any meningeal biopsy. Taking into account that the several CSF cytological examinations and the flow cytometry analysis did not reveal any malignant cells and that the symptoms of meningitis significantly improved without intrathecal chemotherapy, a meningeal involvement by HL was considered unlikely. However, the contribution of HL to the CSF eosinophilia cannot be excluded as the proportion of eosinophils was still high (42%) after 8 weeks of antifungal therapy alone, despite the negative CSF culture, and it decreased to 2% after the chemotherapy initiation. The specific mechanism requires further studies.

Copyright © 2022 Zhang, Li, Shen, Tao and Wang. This is an open-access article distributed under the terms of the Creative Commons Attribution License (CC BY). The use, distribution or reproduction in other forums is permitted, provided the original author(s) and the copyright owner(s) are credited and that the original publication in this journal is cited, in accordance with accepted academic practice. No use, distribution or reproduction is permitted which does not comply with these terms.