Myasthenia gravis (MG), characterized by T-cell involvement and complement dependence, is a group of autoimmune diseases manifested as fluctuating muscle weakness, typically the best in the morning and more pronounced at the end of the day (1). It is caused by antibodies against the components of the post-synaptic muscle endplate at the neuromuscular junction. Eighty percent of patients with MG have detectable antibodies against muscle nicotinic acetylcholine receptors (AChR) and a minority have autoantibody against muscle-specific tyrosine kinase (MuSK) or low-density lipoprotein receptor-related protein 4 (LRP4) (2).

Immune regulatory cells, a small set of immune cells, play an essential role in curbing excessive immune activation and maintaining immune homeostasis. Various immune cells have been found to possess a regulatory capacity, mainly including regulatory T-cells (Tregs), regulatory B-cells (Bregs), macrophages, myeloid-derived suppressor cells (MDSCs), dendritic cells (DCs), and mesenchymal stromal cells (MSCs) (3). Autoimmune disorders may arise when there are defects in the number and function of those cells. In MG, decreased frequency of CD45RA+ FOXP3+ Tregs and reduced suppressive activity of CD4+ CD25high CD127low Tregs have been found (4, 5). Unlike Tregs, Bregs are not well defined due to lacking a specific transcription factor. Both CD1d+CD5+ and CD24high CD38high B cells, which were described to contain an enriched population of Bregs, showed impaired production of IL-10 and suppression of T-helper polarization in MG (6).

Since MDSCs are posited to play a deleterious role in malignancies, they may be functionally beneficial and protective in autoimmunity (12). However, the role of MDSCs in patients with autoimmune diseases is still controversial, and few studies have characterized the role of MDSCs in MG. We hypothesized that MDSCs might have a quantitative or functional defect in patients with MG. In this study, we analyzed the frequencies of circulating MDSCs, their inhibiting capacity on IFN-γ production in T-cells, and their expression of Arg-1 in patients with MG before and after immunotherapy, trying to find the functional alterations of MDSC in MG during different disease stages.

Generalized MG patients with anti-AChR antibodies and healthy controls (HC) were recruited at Neurology Department, Huashan Hospital, Fudan University from 2019 to 2020. Patients who had other autoimmune diseases and received immunotherapy before enrollment were excluded. All patients and HCs in this study had no malignancies, acute or chronic infections, or other autoimmune diseases. All the patients were followed for 6–12 months after steroid immunotherapy with or without immunosuppressants. The study was approved by the Institutional Review Board of Huashan Hospital, Fudan University, and written informed consent was granted from each participant.

For the function assay associated with MDSC, inhibition of T-cells is the gold standard. Non-specific inhibition of anti-CD3/CD28 induced IFN-γ production in T-cells by intracellular staining is one of the most used methods (8). Considering the difficulty obtaining sufficient MDSCs from PBMCs in patients with MG, we evaluated the impact of MDSCs on IFN-γ production in T-cells using MDSC depleted PBMCs by flow cytometry sorting.

Total RNA was extracted from isolated PBMC by TRIzol (Invitrogen, USA) and reverse-transcribed into complementary DNA (cDNA) using a PrimerScript RT Reagent Kit (Takara, China). Relative expressions of Arg-1, iNOS, IL-10, PD-L1, p47phox, gp91phox, and IDO were determined by normalizing the expression of each target gene to β-actin (11). Gene-specific primers are listed in Table S1. 2−(ΔΔCt) was used to calculate the relative fold gene expression in samples after immunotherapy.

Paired (before and after immunotherapy). and unpaired (HCs and patients with MG) samples were tested for statistical significance by the non-parametric Mann-Whitney U-test and parametric Student's t-test, respectively. The correlation coefficient was calculated using Spearman's test for non-parametric data. Numeric values are expressed as mean ± standard deviation, and p < 0.05 was considered statistically significant. All statistical analyses were performed using GraphPad 8 (La Jolla, USA).

We enrolled 30 generalized MG patients with anti-AChR antibodies and 30 HCs. The clinical characteristics of all patients and HCs are summarized in Table 1. The MGFA classification, QMG score, MG-ADL, and the titer of AChR antibody before and after immunotherapy and medication use are shown in Table S2. All the patients were given oral steroids with an initial dose of 20 mg of prednisone every day. The dose was increased by increments of 10 mg every 2 weeks without exceeding.75 mg/kg/d of body weight. The dose was maintained for 1–2 months when showing a ≥2-point reduction in ADL-MG and then reduced by 5 mg every 1–2 months. Intravenous methylprednisolone was administrated in two patients during hospitalization. Non-steroid immunosuppressants were added for patients who did not respond to steroids or refused to take a higher dose of oral steroids. All patients showed clinical improvement, 29/30 patients showed a ≥2-point reduction from baseline in MG-ADL, and only 1/30 showed a 1-point reduction.

Table 1. Summary of healthy controls and clinical features of 30 patients with MG.

To investigate the dynamic change of immune regulatory cells in patients with MG, we compared the frequencies of Tregs and Bregs as well as MDSCs by flow cytometry in patients with MG (n = 13) before (pre-treated) and after immunotherapy (post-treated). We observed a significantly higher frequency of HLA-DR−/low CD11b+CD33+MDSCs in PBMCs in patients after immunotherapy compared to baseline (p = 0.021. Figures 1A–C). While the frequencies of CD24 high CD38 high and CD1d+CD5+ Bregs in CD19+ lymphocytes decreased (p = 0.0032 and 0.019, respectively, Figures 1B,D,E). No significant change was observed (p = 0.24) in the frequency of CD25+CD127low Tregs in CD3+CD4+ lymphocytes (Figures 1B, 1F). So, we focused on the phenotypic and functional changes of MDSCs before and after immunotherapy. 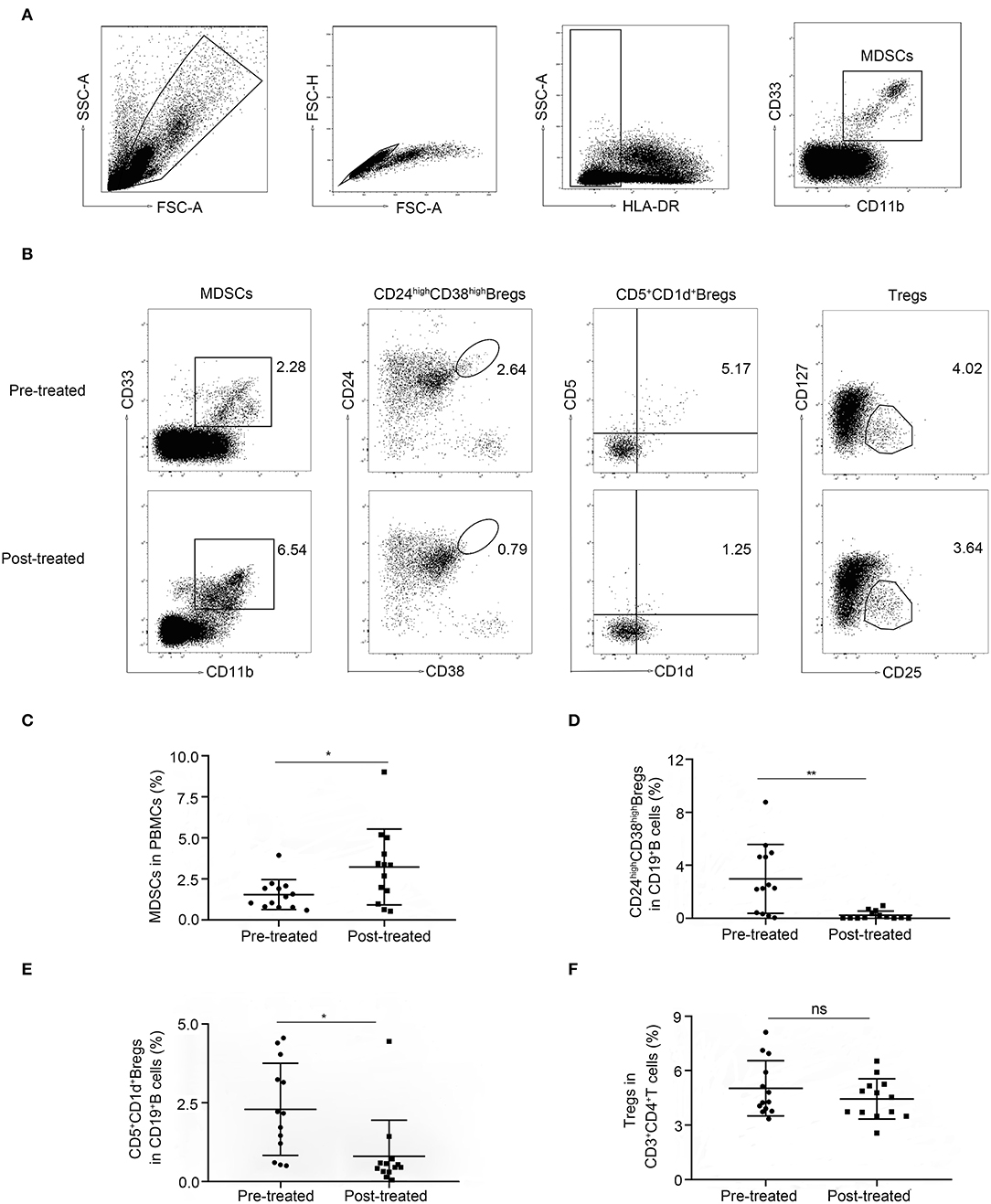 Expansion of MDSCs in Patients With MG After Immunotherapy

Correlation of the Frequency of MDSCs With That of Th1, Th17 Cells, Treg, and Bregs

As shown in Figure 4A, we observed a significant increase in the frequency of CD3+ IFN-γ+ T cells in MDSC depleted PBMCs compared with undepleted PBMCs from both HCs (n = 5, p = 0.0099, Figure 4B) and from patients with MG after immunotherapy (n = 6, p = 0.033, Figure 4D). However, the depletion of MDSCs from the PBMCs in untreated patients with MG did not lead to an increase in the frequency of CD3+IFNγ+T cells in PBMCs (n = 6, p = 0.695, Figure 4C). These findings suggested an impaired suppressive function in untreated patients with MG, and this defect could be ameliorated after immunotherapy. 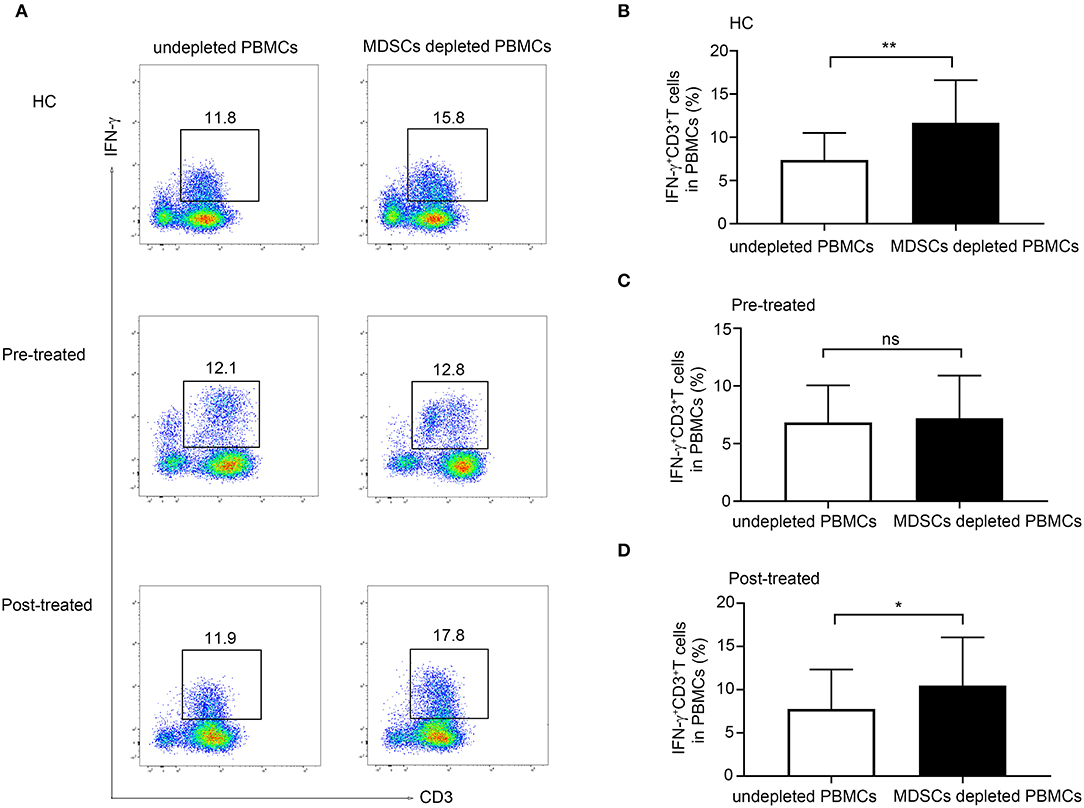 To investigate the potential mechanism by which MDSCs suppress T-cell responses in MG, we measured the intracellular mRNA levels of those factors by quantitative real-time PCR. The expression of TGF-β, iNOS, IL-10, PD-L1, PD-1, and p47phox was upregulated after immunotherapy compared to baseline (P < 0.05, Figure 5A) while that of IDO and gp91phox showed no significant difference.

Figure 5. Arginase-1 expression in patients with MG before and after immunotherapy. (A) The expression of MDSC-related molecules was measured by qPCR (n = 9). *p < 0.05, **p < 0.01. (B) Representative flow cytometry analysis of Arg-1 MFI in PBMC subpopulations from pre-treated and post-treated patients. Arg-1 MFI in MDSCs increased after immunotherapy (n = 6, C). *p < 0.05.

Myeloid-derived suppressor cells, first identified as immunosuppressive cells, expand in tumor tissues and peripheral blood in patients with malignancies. Considering the role of MDSCs in promoting tumor progression by stimulating tumor cell invasion, angiogenesis, and premetastatic niche development (18), we hypothesized that MDSCs might also play a role in autoimmune diseases and the expansion of MDSCs might alleviate disease severity. However, current knowledge on the role of MDSCs in different human autoimmune diseases is limited and conflicting, possibly due to the instability of MDSCs in vivo. In this study, we investigated the phenotypic and functional alterations of MDSC in MG before and after immunotherapy.

Myeloid-derived suppressor cell accumulation has been described in various autoimmune diseases, including rheumatoid arthritis, systemic lupus erythematosus (SLE), inflammatory bowel disease, and multiple sclerosis (19). However, we only identified an increased frequency of gMDSCs but no change of frequencies of MDSCs from untreated patients with MG compared to that from HCs. In agreement with our study, a recent study in relapsing-remitting multiple sclerosis (RR-MS) patients during relapse revealed similar results (20). These results might indicate a different role of mMDSC and gMDSC in autoimmune diseases.

Increasing studies have analyzed the association of MDSCs and proinflammatory and regulatory T-cells in human autoimmune diseases. Mainly from studies of SLE and RA, two perspectives exist. Some studies have shown that MDSCs are highly potent in promoting Th17 cell differentiation and disease progression. In contrast, some evidence indicates the opposite effects of MDSCs on decreasing Th17 and Th1 differentiation as well as inducing Foxp3+ regulatory T-cell differentiation, which is correlated with a relative improvement in the disease (29–33). MG is a B-cell-mediated, T-cell-dependent autoimmune disease (34). The secretion of IFN-γ and IL-17 in AChR peptide-stimulated CD4+ T cells demonstrated that Th1 and Th17 cells are involved in the pathogenesis of MG (35, 36). The association between MDSCs and proinflammatory T cell populations has not been investigated. We observed a negative correlation between the frequency of MDSC and that of Th1 or Th17 cells in patients with MG after immunotherapy but not in untreated patients. The results might arise from the heterogeneous of MDSCs before and after immunotherapy, which had different effects on T-cell proliferation and differentiation. MDSCs could also induce expansion of regulatory B-cells in a murine model of SLE and collagen-induced arthritis (37, 38), but in our study of patients with MG, we found no correlations between the frequency of MDSC and that of Bregs. Accurate elucidation still needs to be further explored in vitro experiments and animal models.

It is well known that the depletion of arginine through the upregulation of Arg-1 was one of the first and foremost T-cell suppressive mechanisms described in MDSCs. Arg-1 reduces the nutrient of T-lymphocytes and produces ornithine and polyamines (7, 39). Low levels of L-arginine reduce the zeta chain expression of the TCR-CD3 on T cells, dampen the cell cycling in the G0/G1 phase (inhibiting T cell proliferation) and decrease proinflammatory cytokine production (40, 41). Plasma concentration of Arg-1 was also negatively correlated to the frequency of Th17 cells in RA (32) and disease activity in Sjögren syndrome (42). However, MDSCs from SLE patients exhibited significantly elevated Arg-1 production and increased potential to promote Th17 differentiation in vitro in an Arg-1–dependent manner. These studies suggest that the role of Arg-1 in the pathogenesis of autoimmune diseases is not univocal. In MG, our study showed that the expression of MDSC-derived Arg-1 was significantly upregulated after immunotherapy, and the expression of Arg-1 in MDSCs was negatively correlated with disease severity measured by MG-ADL. Further studies are required to explore the subtle role of Arg-1 for T cell proliferation and Th17 differentiation in MG.

There are some limitations in our study: (1) The patients were followed only for 6–12 months, and the long-term phenotypic and quantitive changes of MDSCs are still unknown; (2) Lacking the direct study of a suppressive effect of MDSCs on T-cell proliferation (3) Further in vitro and in vivo studies are needed to elucidate the role of MDSC derived Arg-1 in T-cell suppression and differentiation; (4) Since difficulties obtaining sufficient blood samples from all patients with MG, a limited sample size for correlated analysis between frequency of MDSCs and Th17/Th1, semi-quantity analysis of Arg-1 expression and IFN-γ production in T cells with and without MDSCs.

The studies involving human participants were reviewed and approved by the Institutional Review Board of Huashan Hospital, Fudan University. The patients/participants provided their written informed consent to participate in this study.

The Supplementary Material for this article can be found online at: https://www.frontiersin.org/articles/10.3389/fneur.2022.902384/full#supplementary-material

Copyright © 2022 Wang, Yan, Su, Wang, Luo, Lu, Zhao, Zhao and Xi. This is an open-access article distributed under the terms of the Creative Commons Attribution License (CC BY). The use, distribution or reproduction in other forums is permitted, provided the original author(s) and the copyright owner(s) are credited and that the original publication in this journal is cited, in accordance with accepted academic practice. No use, distribution or reproduction is permitted which does not comply with these terms.