Cancer is a leading cause of death, accounting for about 14.6% of all human deaths (1). Effective medical intervention could only be achieved if the cancerous tissue is identified in advance. Molecular screening with biomarkers is now recognized as an efficient means in early cancer detection. Biomarkers of which expression changes have close linkage with the progression of cancer phenotype are adopted as an indicator of cancers.

Human telomerase reverse transcriptase (hTERT) activation is one of the universal and hallmark changes in cancer progression. Telomerase is the enzyme responsible for maintaining chromosomal endings during cell replication. Telomerase activation could lead to uncontrolled proliferation and immortalization through inhibition of replicative senescence (2, 3). Most mature normal cells silence the telomerase and their telomerase expression remains low (4). The telomerase activity is controlled directly by the transcript quantity of hTERT gene. Hence, increased hTERT transcript level is an indication of cancer cells and reflects the proliferative propensity accordingly. Clinically, high hTERT level in the cancerous tissue is associated with the poor outcome in a number of human cancers (5–8).

The gene encoding hTERT is regulated by multiple mechanisms. Activation of hTERT transcription requires the cooperation between multiple regulatory proteins. The promoter region of hTERT gene is CpG rich and harbors distinct CpG islands. The cytosine of CpG dinucleotides in the hTERT CpG islands is susceptible to methylation modification. Methylated CpG islands are usually observed in silenced genes as the aberrant addition of methyl group has a negative impact on transcription initiation. Furthermore, the methylated sequence allows the binding of specific transcription suppressors (9, 10). By contrast, methylated hTERT promoter has a positive impact on its activation because methylation prevents the binding of CTCF repressor (11). The methylated promoter DNA allows the binding of specific activators and regulatory proteins (e.g., c-Myc, Sp1) that regulate hTERT transcription directly (12). This feature is cancer specific and is absent in most of the hTERT gene in the normal somatic cells (13, 14). Hence, the presence of methylated hTERT DNA is a potential indicator for the presence of cancer cells.

In comparison with other forms of cancer biomarker, methylated gene is advantageous for the high cancer specificity. Aberrant DNA methylation is a covalent modification. The diagnostic performance of methylated DNA however varies in a gene-by-gene and cancer-specific manner. Not all the methylated CpG sites/island can lead to the expression activation of hTERT gene. For example, methylation of the E-box in hTERT promoter will lead to a weak transcription activation as the interaction between C-Myc and E-box was reduced due to the presence of methylated moiety (12). Thus, selection between different hTERT methylation sites will affect the resulting diagnostic accuracy. At present, the use of hTERT DNA as cancer biomarker remains controversial as the diagnostic performance varies depending on the methylated loci (13, 15). In addition, studies across different cancer types examining different hTERT hotspot make it difficult to comprehend and evaluate the actual diagnostic accuracy of hTERT for cancer detection.

In the current study, we first performed a systematic review on the methylated hTERT hotspots in human malignancies. Furthermore, meta-analysis was used to evaluate the diagnostic performance of hTERT in cancer detection.

Systematic search from PubMed was performed using the key terms included “cancer,” “carcinoma,” “tumor,” “neoplasm,” “methylation,” “hypermethylation,” “hypomethylation,” “demethylation,” “TERT,” and “telomerase reverse transcriptase.” In total, 290 articles were identified from PubMed search (Figure S1 in Supplementary Material). According to our selection criteria, we excluded 278 records due to language (n = 9), no full-texts (n = 45), review article (n = 35), and irrelevant articles (n = 189). Subsequently, the remaining 12 relevant studies with full text were assessed. The pooled sensitivity (Se), specificity (Sp), and diagnostic odds ratio (DOR) were calculated using MetaDiSc software (Version 1.4) (16). Oikonomou et al. (17) were excluded due to the fact that the study population is duplicated by Iliopoulos et al. (18). Only studies focused on hTERT core regulatory promoter (−1876 to +335) relative to translation start site ATG were included (19). Studies by Iliopoulos et al. were excluded as the examined hTERT methylation site was out of our scope (18). Finally, our systematic search yielded 10 studies (20–29). Table S1 in Supplementary Material displayed the detailed characteristics of each study. The primers and probes used for quantitative MSP (qMSP) assay in different studies were listed in Table S3 in Supplementary Materials. The studies quality was evaluated using the revised Quality Assessment for Studies of Diagnostic Accuracy tool (QUADAS-2), and the results were listed in Table S2 in Supplementary Material (30).

For the diagnostic value of methylated hTERT in distinguishing cancer from normal, 7 studies with 543 samples were included in this meta-analysis. The pooled sensitivity and specificity of methylated hTERT were 0.67 (95%CI, 0.62–0.73) and 0.89 (95% CI, 0.84–0.93), respectively (Figures 1A,B). The DOR was 24.71 (95% CI, 7.39–82.63). STATA (Version 12, STATA Crop., USA) was used to generate the Fagan plot and likelihood ratio scattergram. The pooled positive likelihood ratio (PLR) and negative likelihood ratio (NLR) were 8 and 0.24, respectively (Figure 1C). As indicated by the pooled PLR value of the seven studies, patients with cancer have an eightfold higher chance of being methylated hTERT positive in comparison with non-cancer controls. The pooled NLR value of 0.24 indicates that the probability of having cancer is 24% when methylated hTERT was negative. The summary likelihood matrix point was located in the right lower quadrant (PLR < 10 and NLR > 0.1) (Figure 1D), indicating that methylated hTERT is neither useful for confirming the presence of cancer nor useful as an exclusion indicator. In addition, the summary receiver operation characteristic (SROC) curve was generated based on sensitivity and specificity of each study. The area under the curve (AUC) of SROC curve was 0.90 (SE = 0.05) (Figure 1E). Publication bias was examined by Deek’s funnel plot asymmetry test. No publication bias was observed among the selected studies (p = 0.32) (Figure 1F). Heterogeneity was assessed by I2 statistic. If I2 value was lower than 50%, the study was considered as homogeneous and Mantel–Haenszel model was applied. If I2 value was higher than 50%, the study was regarded as high heterogeneity and the Dersimonian–Laird model was adopted instead. Heterogeneity was observed in both sensitivity and specificity of methylated hTERT (Figures 1A,B). Threshold evaluation was used to examine the heterogeneity in diagnostic tests (16). Threshold effect was evaluated by calculating Spearman correlation coefficient between logit of sensitivity and logit of 1-specificity. The Spearman correlation coefficient of logit of sensitivity and logit of 1-specificity of methylated hTERT was 0.54 (p = 0.21), indicating that there is no heterogeneity from threshold effect. 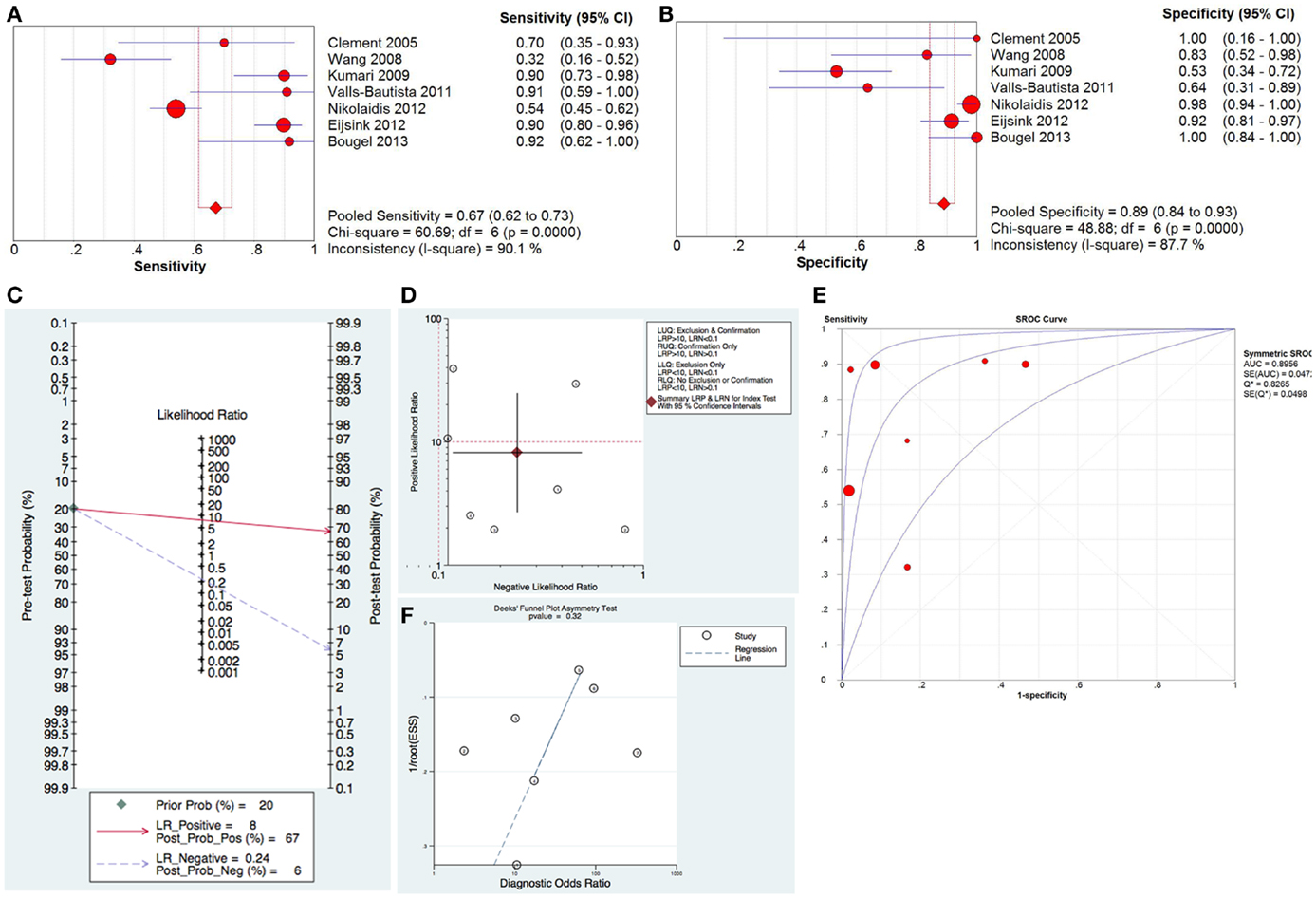 Methylated hTERT has a good diagnostic power in discriminating cancer from normal tissues (DOR: 24.71 and AUC: 0.9). The DOR is the ratio of the odds of a true-positive to the odds of a false-positive. The value of DOR ranges from 0 to infinity. Higher value indicates better discriminatory performance. The AUC from the ROC curve is an indicator of diagnostic accuracy (AUC > 0.97: excellent accuracy, 0.93–0.96: very good, 0.75–0.92: good) (31). The diagnostic accuracy, however, is weaker for discriminating cancer tissues from benign tissues (DOR: 19.54 and AUC: 0.88). The diagnostic power is lowest to differentiate benign and normal tissues (DOR: 3.24 and AUC: 0.57). The definitive diagnosis of most solid tumor is based on histological and immunohistochemical features. Under certain circumstances, however, the use of molecular markers might be useful in overcoming the limitation of the conventional methods. For example, fine needle aspirate cytology (FNAC) is a major methods used in salivary gland tumor diagnosis. It is difficult, however, to distinguish patients with carcinoma ex pleomorphic adenoma (Ca ex PSA) from benign pleomorphic salivary adenomas (PSA) through cytological examination on the aspirate (27). Although FNAC has a high diagnostic accuracy for histologically high-grade Ca ex PSA, its diagnostic efficiency decreases in low-grade Ca ex PSA. Methylated TERT is only present in the Ca ex PSA and is undetectable in benign PSA. Thus, the use of methylated TERT as adjuvant marker may provide clinical subtype information for personalized management of this disease (27).

Effects of Detection Methods on the Diagnostic Efficiency of Methylated hTERT 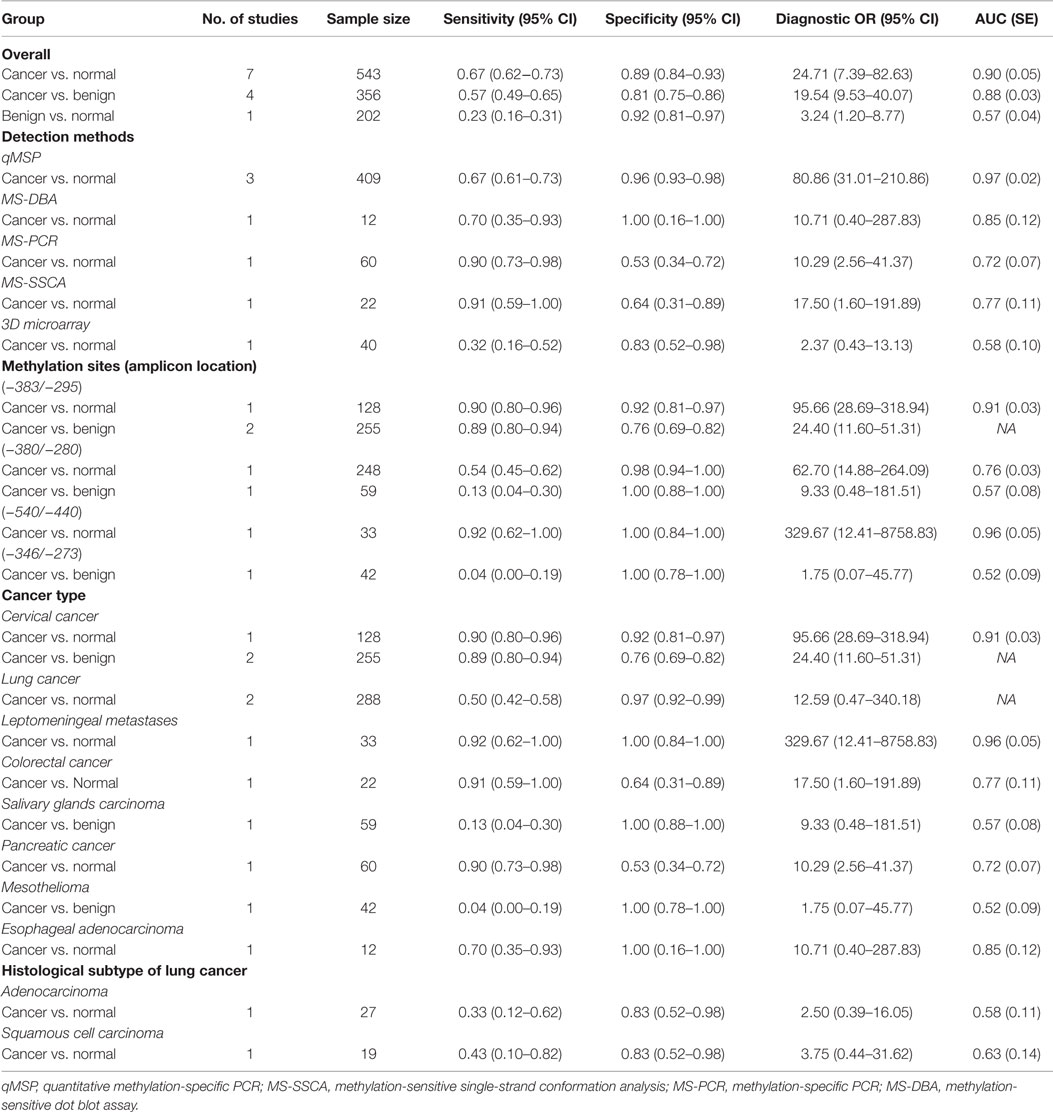 These results indicated that different detection methods affected the diagnostic efficiency of methylated hTERT. Among all the reported methods used in detecting methylated hTERT, qMSP assay demonstrated the highest diagnostic accuracy in comparison with other detection methods (as evidenced by the DOR and AUC values). As the studies employing non-qMSP methods (such as MS-DBA and MS-SSCA) only contain a few cases and the number of similar studies remains very limiting, further comparative studies at a larger scale are essential to affirm the performance of qMSP. An AUC value of 0.97 revealed that the diagnostic accuracy of methylated hTERT examination using qMSP assay is excellent in discriminating cancer from normal tissues (31).

Different primer probe sets used in the qMSP assays affect the diagnostic performance of methylated hTERT. This could possibly be because of the different consequent events associated with the methylation of distinct sites of the hTERT promoter. Primers with amplicon located at −540/−440 and −383/−295 displayed a higher diagnostic accuracy. The promoter region −540/−440 contains activator protein 2 (AP2) and nuclear factor 1 (NF1)-binding sites, while promoter region −383/−295 harbors Ikaros 2 (IK2), AP2 and activator protein 4 (AP4)-binding sites (32). The promoter −380/−280 also contained IK2-binding sites. AP2, NF1, and AP4 are transcription factors that could activate hTERT transcription (33). It has been reported that methylation at AP2-binding sites suppressed the binding of AP-2 (34). These results indicated that methylation at specific binding site could alter the binding with its transcription factors, leading to positive regulation of hTERT gene expression. Nevertheless, the regulatory elements that are essential for the regulation of hTERT gene and the diagnostic efficacy of methylated hTERT need to be delineated by functional experiments such as in vitro methylation assay.

The Diagnostic Performance of Methylated hTERT in Various Cancers

Two studies investigated the diagnostic value of methylated hTERT in both cervical cancer and lung cancer. Only one study was available for each of the other cancer types. High variations in DOR values (ranged from 1.75 to 329.67) and the AUC values (ranged from 0.52 to 0.96) were observed between different cancer types (Table 1). Given that the diagnostic accuracy of methylated TERT might vary in the histological subtype of each cancer type, we intended to stratify each cancer type depending on the histological or molecular subtypes and evaluate the performance difference of methylated hTERT. Among the 10 included studies, only Wang et al. (27) provided histological information for subsequent subgroup analysis. Accordingly, their lung cancer cohorts could be stratified into two groups: adenocarcinoma and squamous cell carcinoma of which, methylated hTERT had a remarkably higher value in sensitivity, DOR, and AUC in lung squamous cell carcinoma in comparison with adenocarcinoma (Table 1).

T-SW conceived the study. WG, YS, and W-YL reviewed and extracted data from the literature. WG, YS, WL, W-YL, and JW carried out the meta-analysis and interpretation of the data. T-SW, WG, W-YL, and JC drafted and revised the manuscript. All authors read and approved the final manuscript.

The reviewer Alessandro Rimessi and handling Editor Paolo Pinton declared their shared affiliation, and the handling Editor states that the process nevertheless met the standards of a fair and objective review.

The study was supported by Seed Funding of Basic Research, The University of Hong Kong.

The Supplementary Material for this article can be found online at https://www.frontiersin.org/article/10.3389/fonc.2015.00296

17. Oikonomou P, Messinis I, Tsezou A. DNA methylation is not likely to be responsible for hTERT expression in premalignant cervical lesions. Exp Biol Med (Maywood) (2007) 232(7):881–6.

Copyright: © 2015 Gao, Shi, Liu, Lin, Wu, Chan and Wong. This is an open-access article distributed under the terms of the Creative Commons Attribution License (CC BY). The use, distribution or reproduction in other forums is permitted, provided the original author(s) or licensor are credited and that the original publication in this journal is cited, in accordance with accepted academic practice. No use, distribution or reproduction is permitted which does not comply with these terms.