University of the Punjab, Pakistan

Methods: We collected data from the centralized bidding procurement (CBP) system in Shandong province between 2012 and 2016. Governmental health facilities including secondary and tertiary hospitals, and urban and rural primary healthcare centers (PHCs) procured antibiotics via this system. Antibiotics were classified according to the Anatomical Therapeutic Chemical (ATC) classification system. Antibiotic expenditure was assessed using total annual expenditure (US dollars) and expenditure per person per year (US dollars).

Conclusions: The overall antibiotic expenditure kept increasing in the public healthcare institutions in Shandong. The trends of increasing expenditure began to decline in 2016, which may be associated with antibiotic stewardship initiatives. The expenditure for expensive and critical important classes of antibiotics increased, therefore it is of importance to develop policies on improving the rational use of antibiotics.

Globally, attention is being drawn to antimicrobial resistance (AMR). AMR has posed a serious threat not only to human health but also to economic and social development. In the absence of no effective strategy to control AMR, it is estimated that by 2050, there will be approximately 10 million deaths each year and a cumulative $100 trillion economic burden, caused by resistant infections (O'Neill, 2016). AMR is known to be associated with the irrational use of antibiotics (Goossens et al., 2005; Toska and Geitona, 2015). Improving the use of antibiotics could help reduce AMR and the subsequent costs related to it (Wang et al., 2016; Davey et al., 2017).

In China, national health expenditure sharply increased from $423 billion (based on the value of 1 US$ = 6.64 RMB in 2016) in 2012 to $698 billion in 2016 (National Health Family Planning Commission, 2017a). This increase was partly driven by the expansion of healthcare coverage and partly due to the growth of unnecessary or inappropriate health services such as the use of medicines and tests (Liang et al., 2014). A study from 47 countries found that medicines accounted for the greatest total out-of-pocket health expenditure (Alsan et al., 2015). Thus, successful control of the rise in medicine costs, is key in reducing healthcare expenditure and promoting a healthcare system reform (Shi et al., 2014). The expenditure on antibiotics was the highest of any medicine in China, however, antibiotics were commonly reported to be inappropriately used by healthcare providers (Han et al., 2013; Wang et al., 2014; Wei et al., 2017). A recent study has found that each Chinese person consumed six times more antibiotics compared to a person in the US or European countries (Zhang Q. Q. et al., 2015).

To improve the use of antibiotics and to control increasing expenditure on medicines, the Chinese government has continuously released relevant policies since 2009. In 2009, a drug centralized bidding procurement and supply chain system (hereafter short for CBP system) was established at provincial-level across China, with the purpose of supporting the essential medicine policy, regulating medicine procurement behaviors by health providers and reducing medicine costs (National Health Family Planning Commission, 2009). Public healthcare institutions were asked to negotiate and transact with pharmaceutical companies via the CBP system. Since 2013, interventions were implemented throughout China to improve antibiotic use in public hospitals (National Health Family Planning Commission, 2013). By the end of 2015, four governmental departments jointly issued a document of suggestions on controlling the irrational increase of medical expenditure in public healthcare institutions (National Health Family Planning Commission, 2015). Secondary and tertiary hospitals were required to gradually reduce their medicine cost proportion to 30%. In 2009, a zero mark-up policy was introduced to primary healthcare centers (PHCs), followed by secondary hospitals in 2012, and tertiary hospitals in 2016 (National Health Family Planning Commission, 2009; Mao and Chen, 2015). This policy is meant to prevent and eliminate revenue from prescribing.

We previously published a study regarding antibiotic consumption at the public healthcare institutions in Shandong (Yin et al., 2017). Our data showed that both oral and parenteral antibiotic consumption increased first and then declined between 2012 and 2016. The turning point appeared in 2014 for rural PHCs, and in 2015 for secondary and tertiary hospitals. Due to scarcity of available data, published literature regarding antibiotic expenditure both at national- and provincial-level, is limited. The main aim of this study was to explore trends of antibiotic expenditure at public healthcare institutions in Shandong, over a 5-year period, using antibiotic procurement data collected from Shandong CBP system. The secondary aims were to assess antibiotic expenditure of different levels of healthcare institutions as well as according to the Anatomical Therapeutic Chemical (ATC) classification system.

In 2016, Shandong had a population of 99.5 million, about 1.5 times the population of the UK (World Bank, 2016; National Bureau of Statistics of China, 2017). In 2016, the per capita GDP was $10,351 in Shandong which ranked ninth in all 31 provinces (including four independent municipalities) in China. The annual disposable income for urban and rural residents was $5,122 and $2,102, respectively (National Bureau of Statistics of China, 2017). In China, healthcare institutions are classified into tertiary hospitals, secondary hospitals and PHCs, based on the number of beds, staff numbers, types of clinical departments, infrastructures and equipment, et al. (Chinese Ministry of Health, 1989). Tertiary hospitals provide clinical, academic, and research services to the whole province or country, while secondary hospitals provide services to residents across the city or county. PHCs, including community health centers and community health stations in urban areas and township hospitals and village clinics in rural areas, are the basic units of healthcare institutions. PHCs are responsible for providing basic health services, for instance, the treatment of common diseases, vaccination, the management of non-communicable diseases and providing health education to the community. According to the China Health Statistics Yearbook there were, in total, 116 public tertiary hospitals, 347 public secondary hospitals, and 2,143 public PHCs in Shandong in 2015 (National Health Family Planning Commission, 2016). 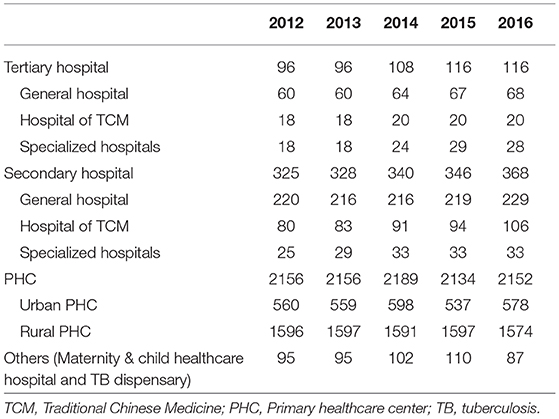 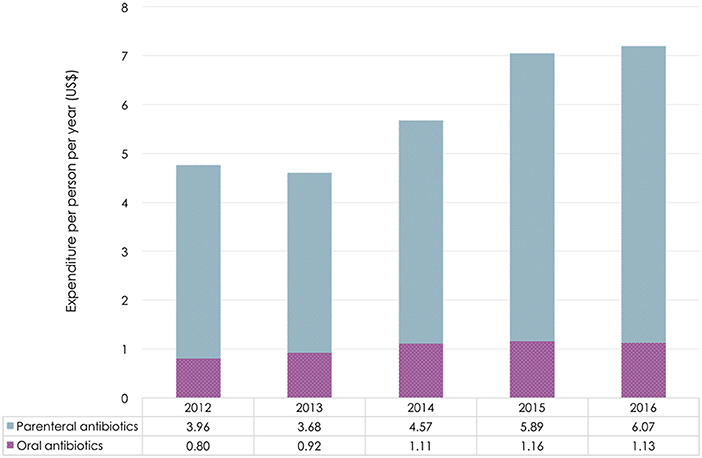 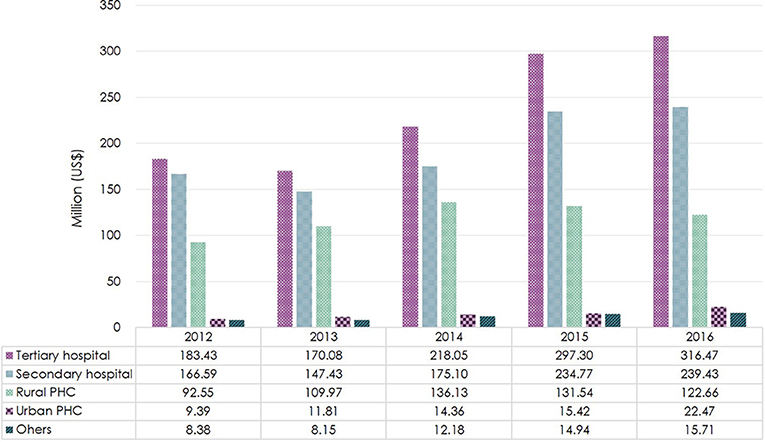 Figure 2. Total antibiotic expenditure by level of healthcare institution in Shandong Province, 2012–2016. Based on the average exchange rate in 2016: 1 US$ = 6.64 RMB. PHC, Primary healthcare center.

Figure 3. Total antibiotic expenditure by type of healthcare institution in Shandong Province, 2012–2016. Based on the average exchange rate in 2016: 1 US$ = 6.64 RMB. TCM, Traditional Chinese Medicine.

Antibiotic Expenditure by Class of Antibiotics 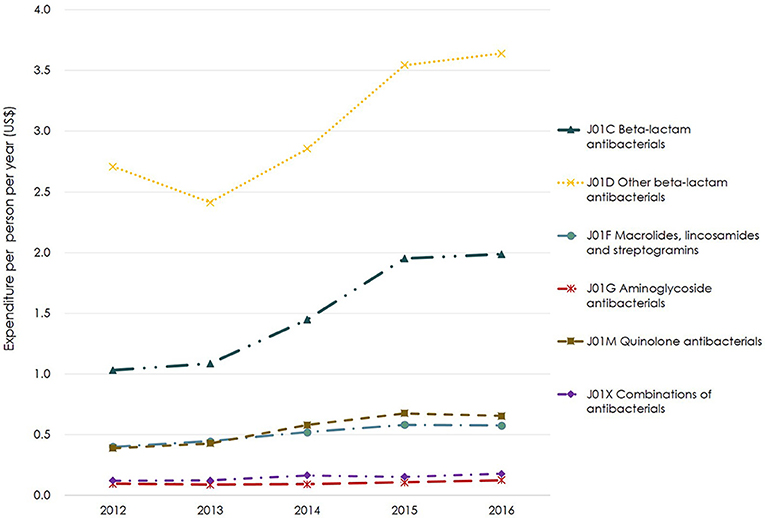 Figure 4. Expenditure for major classes of antibiotics based on ATC-3 in Shandong Province, 2012–2016. Based on the average exchange rate in 2016: 1 US$ = 6.64 RMB. ATC-3, The 3rd level of ATC which is classified according to pharmacological subgroup.

Expenditure for Different Classes of Antibiotics by Healthcare Institution Table 2. Total expenditure for the top five classes of antibiotics based on ACT-4 at different levels of healthcare institutions in Shandong, 2012–2016 (million US$).

In accordance with global evidence, about 80% of all antibiotics were consumed in PHCs (Center for Disease Dynamics Economics Policy, 2015). The 2013 intervention which required public healthcare institutions to prescribe no more than two antibiotics in one outpatient visit and the 2014 policy of improving antibiotic use in PHCs have contributed to a reduction in antibiotic consumption in rural PHCs where antibiotics were more likely to be irrationally used (National Health Family Planning Commission, 2013, 2014; Yin et al., 2017). As rural PHCs often have a limited selection of antibiotics available, a decline in consumption directly caused the reduction of antibiotic expenditure in rural PHCs.

Cephalosporins and quinolones were among the top used ATC classes of antibiotics in many countries including China, while at the same time increased rates of bacteria resistance to these antibiotics were reported (Liew et al., 2011; Van Boeckel et al., 2014; Kourlaba et al., 2015). According to the WHO Critically Important Antimicrobials (CIA) list, third-generation cephalosporins and quinolones were among the highest priority classes of antibiotics and should be used prudently (World Health Organization, 2017). Whereas, both the third-generation cephalosporins and fluoroquinolones had high expenditures in our study. Carbapenems, which were recognized as the last line of defense for bacterial infections, were classified as special antibiotics and should not be used without consultation with infection control experts in China (National Health Family Planning Commission, 2017b). However, an uptrend of expenditure for carbapenems as well as consumption was observed in tertiary hospitals in China (Wushouer et al., 2017). These findings suggest that the current policies are obviously effective in controlling overall consumption and expenditure, but have very little impact on improving the rational use of antibiotics.

This study reported the trends of antibiotic expenditure in a province, covering about one-tenth of the total national population, based on the CBP system. It filled a research gap where previous studies only focused on antibiotic cost data collected from prescriptions. However, several limitations should be acknowledged. Firstly, we cannot calculate expenditure per user as no patient-level data were recorded in the CBP system. Further studies in this field, using data based on a patient-level, such as data from the health insurance system, would be greatly beneficial. Secondly, we did not consider antibiotic expenditure that may have occurred in private pharmacies. Thus, the total antibiotic expenditure at provincial-level may be underestimated. Thirdly, the trends of antibiotic expenditure in public healthcare institutions were evaluated based on years. We suggest that future studies evaluate monthly trends to shed additional light on diagnostic demands within years. Fourth, the increasing number of secondary and tertiary hospitals may impact on the changes in expenditure. Finally, the policies of zero mark-up and medicine cost proportion controlling were issued in recent years. Future studies which evaluate the long-term effect of these policies on antibiotic expenditure are therefore recommended.

We would like to thank Qiang Li from Shandong Resources Trading Center for his assistance in data collection.

Center for Disease Dynamics Economics and Policy (2015). The State of the World's Antibiotics. Washington, DC: CDDEP.

WHO Collaborating Centre for Drug Statistics Methodology (2013). Guidelines for ATC Classification and DDD Assignment 2013. Norway: WHO.

Copyright © 2018 Yin, Wu, Wei and Sun. This is an open-access article distributed under the terms of the Creative Commons Attribution License (CC BY). The use, distribution or reproduction in other forums is permitted, provided the original author(s) and the copyright owner(s) are credited and that the original publication in this journal is cited, in accordance with accepted academic practice. No use, distribution or reproduction is permitted which does not comply with these terms.