How long do we need to follow-up our hernia patients to find the real recurrence rate?

Introduction: It is known that recurrences continue to occur after the follow-up period of 1–5 years usually used in most hernia studies. By reviewing the data in the Herniamed Hernia Registry documenting the time interval between the recurrent operation and previous inguinal hernia repair, the present study identifies the temporal course of onset of recurrence.

Patients and Methods: Prospective data were recorded in the Herniamed Registry between 1 September 2009 and 4 May 2015 on a total of 145,590 patients with 171,143 inguinal hernia operations. These included 18,774 operations due to an inguinal hernia recurrence (10.94%). During the same period, prospective data were collected on 24,385 incisional hernia operations. The latter cases included 5,328 patients with a recurrent incisional hernia (21.85%).

Conclusion: Ascertainment of the actual recurrence rate after hernia repair calls for a follow-up of 10 years for incisional hernia and of 50 years for inguinal hernia. The data collected can be used to give an approximate estimate with a shorter follow-up.

Hernia recurrence can occur immediately, early, or later in the time course following hernia repair (1). Some authors have used 5 years to separate early from late recurrence, although a specific time frame has not been firmly established (1). Early recurrence is generally related to technical (surgeon) factors (2). Late recurrences are related to hernia biology, aging, and other patient-related factors (1). Late recurrences continue to occur, but at a slightly decreased incidence (1).

Recurrence seems to develop even after a long period of time, in particular, after non-mesh repair (2). It is known that recurrence continues to occur after the follow-up period of 1–5 years usually used in most hernia studies (2). There are relatively few studies that have calculated the recurrence rates following inguinal and incisional hernia operations after a follow-up of 10 years (3–7). To date, there are no studies on recurrences after a follow-up of more than 10 years.

By reviewing the data in the Herniamed Hernia Registry documenting the time interval between the recurrent operation and the previous inguinal hernia repair, the present study identifies the temporal course of onset of recurrence and on that basis calculates the maximum follow-up time needed to track all recurrences occurring after inguinal and incisional hernia repair.

The Herniamed Registry is a multicenter, Internet-based hernia registry (8), into which 425 participating hospitals and surgeons engaged in private practice (Herniamed Study Group) had entered data prospectively on their patients who had undergone hernia surgery.

If a patient had experienced a recurrence after inguinal or incisional hernia repair, a search was carried out in the Herniamed Registry to identify and record the type of previous operation (suture repair, mesh repair, endoscopic procedure). Besides, the time interval between the recurrent operation and previous repair was documented.

Comparison of the time lines showing the cumulative proportion of recurrences helps to identify the marked difference between inguinal hernias and incisional hernias (Figure 1). Whereas in the case of inguinal hernia, only 38.02% of recurrences had already occurred during a follow-up period of up to 5 years, 57.46% after 10 years, and 97.15% only after 50 years, for incisional hernia, already 78.86% had occurred after 5 years, and 91.83% after 10 years. 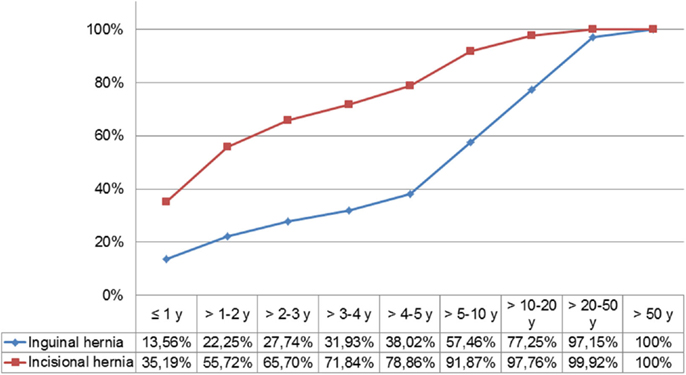 In summary, it can be stated that the actual recurrence rates after inguinal hernia operations can only be calculated only after a 10-year follow-up, and after inguinal hernia operations only after a 50-year follow-up. Since it is hardly possible to implement such a study design in reality, the information presented here based on data from the Herniamed Registry can serve as a basis for an approximate estimate of the expected recurrence rates.

Copyright: © 2015 Köckerling, Koch, Lorenz, Schug-Pass, Stechemesser and Reinpold. This is an open-access article distributed under the terms of the Creative Commons Attribution License (CC BY). The use, distribution or reproduction in other forums is permitted, provided the original author(s) or licensor are credited and that the original publication in this journal is cited, in accordance with accepted academic practice. No use, distribution or reproduction is permitted which does not comply with these terms.