Materials and methods: SC (n = 7) and IM (n = 7) VM were analyzed for the expression of PRR, ACE, ATIIR1, and ATIIR2 using 3,3-diaminobenzidine and immunofluorescent (IF) immunohistochemical (IHC) staining and NanoString gene expression analysis.

Conclusion: The presence of PRR, ACE, ATIIR1, and potentially ATIIR2, in both SC and IM VM, suggests a role for the RAS in the biology of VM. This novel finding may lead to a mechanism-based therapy for VM.

Venous malformation affects 1.5% of the population (2) and is characterized by thin-walled ectatic venous channels lined by flat endothelial cells (EC) with deficient or absent smooth muscle cells (SMC) (3, 4). VM may involve any body site and tissue (4), commonly in subcutaneous (SC) and less commonly in intramuscular (IM) locations (5). Although VM is present at birth, it may not become apparent until later in life (3–5). Its clinical presentation depends on the location and size of the lesion. SC lesions typically present as compressible masses with a bluish hue, whereas IM lesions often present with a swelling and/or pain (4). VM may cause cosmetic concerns and/or functional deficits, such as obstructive sleep apnea as in the case of oropharyngeal lesions (6). VM grows proportionately with the growth of the child and may suddenly expand in response to hormonal changes or trauma, including incomplete surgical excision (3–5).

About 1–2% of VM cases are familial caused by a TIE2 mutation (7). Half of the sporadic cases also consists a TIE2 somatic mutation (7). These mutations have been shown to result in ligand-independent hyper-phosphorylation of the TIE2 receptor (7). Vikkula et al. (8) suggest that the TIE2 mutation in EC in VM may reduce SMC ligand expression causing a local uncoupling between normal SMC recruitment and the proliferation of EC.

Previous work has identified the presence of primitive mesodermal cells with a neural crest phenotype in IH (12), regulated by the RAS (13). These discoveries of the stem cell nature of IH, regulated by the RAS, underscore the natural involution and accelerated involution of this tumor, induced by β-blockers and ACE inhibitors (14–16).

This study aimed to identify the expression of the components of the RAS, namely, PRR, ACE, ATIIR1, and ATIIR2, in both SC and IM VM.

Subcutaneous VM tissues from seven patients aged 9–30 years (mean, 22.2 years) and IM VM from seven patients aged 16 months–54 years (mean, 21.3 years) were sourced from the Gillies McIndoe Research Institute Tissue Bank, in accordance with a protocol approved by the Central Health and Disability Ethics Committee (ref. no. 13/CEN/130). The tissues used in this study were confirmed to be SC or IM VM by a consultant anatomical pathologist (HDB) using hematoxylin and eosin (H&E) staining and D2-40 staining to exclude lymphatic malformation.

Positive control samples were selected based on the previously reported expression of the relevant proteins: placenta for PRR (18), kidney for ACE (19) and ATIIR2 (20), and liver for ATIIR1 (20). To determine the specificity of the primary antibodies, staining of VM sections was performed by omitting the primary antibodies.

Raw NanoString data were analyzed using SPSS (v22, IBM), corroborated with nSolver™ software (NanoString Technologies) using standard settings, and normalized against the housekeeping gene. To determine the level of confidence between the IM and SC VM samples, two-tailed Student’s t-test was performed. Charts were made with Excel (Microsoft Office 2013).

The vasculature within the VM lesions was identified by H&E staining, characterized by thin-walled ectatic venous channels with deficient or absent SMC in both IM (Figure 1A) and SC (Figure 1B) VM. None of the IM or SC VM lesions used in this study expressed D2-40 (Figures S1A,B in Supplementary Material, brown). 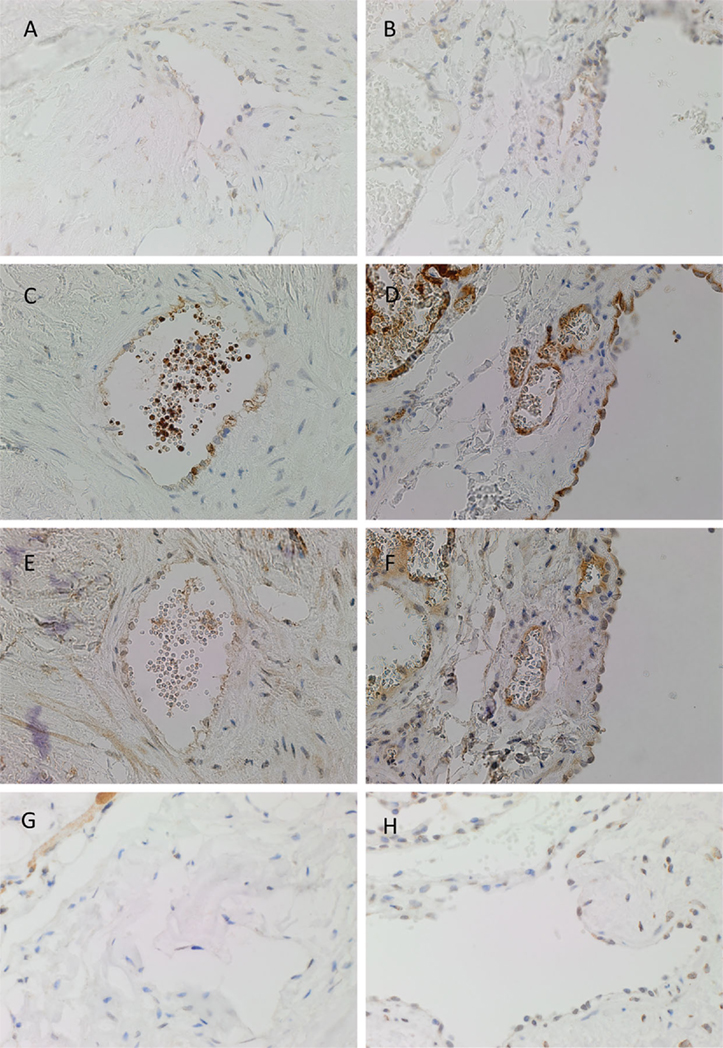 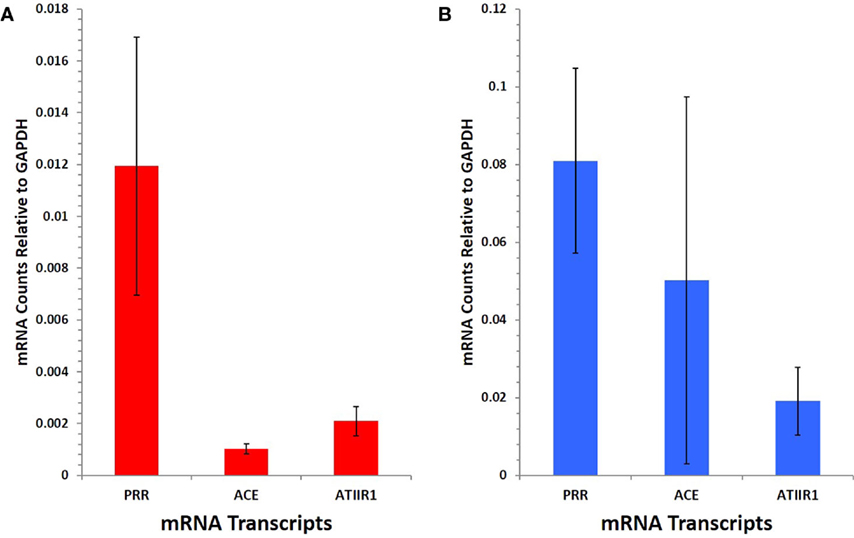 Figure 5. PRR, ACE, and ATIIR1 mRNA levels in SC (n = 3) (A) and IM (n = 3) (B) VM tissues. Total mRNA was analyzed by NanoString nCounter Gene Expression assay with specific probes for PRR, ACE, ATIIR1 and ATIIR2 genes. Counts from ATIIR2 did not exceed those of the negative control.

This report provides novel findings of the presence of PRR, ACE, ATIIR1, and potentially ATIIR2 within both IM and SC VM.

The demonstration of PRR on the endothelium of VM highlights the putative role of this receptor in the biology of VM, including binding pro-renin and renin and downstream signaling through MAP kinases ERK1 and ERK2 (18). Pro-renin bound to PRR undergoes a conformational change, exposing the active sites and rendering it enzymatically active (11). Renin bound to PRR leads to a fourfold increase in catalytic activity (18). The presence of PRR on the endothelium of VM indicates a potential role for facilitating increased local conversion of angiotensinogen to ATI, indicating a role for this peptide in VM biology.

ACE has been reported as a marker for identifying primitive hemangioblasts derived from human pluripotent stem cells (21). It is exciting to speculate that the endothelium of VM, which we have demonstrated to express this marker, may reflect a relative primitive phenotype for this endothelium; however, this is the topic of our current investigation.

It is intriguing that both DAB and IF IHC analysis revealed positive staining for ATIIR2 on the endothelium as well as cells away from the endothelium, but that its expression was not demonstrated by NanoString gene expression analysis. The reasons for these include possible non-specific binding of the primary antibody used for IHC staining, despite appropriate controls being used, or that the probe used for the NanoString analysis failed to cover all the possible mRNA splice variants for this protein. Furthermore, it is interesting to note that the DAB IHC analysis of the SC and IM VM samples revealed relatively increased staining for ATIIR1 on the endothelium of smaller vessels compared to the dilated vessels, the reasons for which extend beyond this study.

The presence of PRR, ACE, ATIIR1, and potentially ATIIR2 in VM indicates a potential role for the RAS in this condition. Nguyen Dinh Cat et al. (22) have demonstrated the components of the RAS including PRR, ACE, ATIIR1, and ATIIR2 in normal vascular tissues. ATIIR1 and ATIIR2 have been shown to serve distinct functions, but share ATII as a common ligand (20). The demonstration of ATIIR1, and potentially ATIIR2, in VM presented here does not delve into the functional roles of these proteins in VM, as this is the topic of further study. However, given ATIIR1 is responsible for the proangiogenic effects of ATII (23), this may, in part, explain the increased density of abnormal venous channels within VM. The presence of ATIIR2 may indicate cellular differentiation determination, as previously proposed by Zambidis et al. (21).

A recent case report observing reduction of rectal bleeding and anemia from a VM affecting the rectosigmoid junction following administration of propranolol and celecoxib (24) was attributed by the authors to the vasoconstrictive effect of propranolol, a β-blocker, and the inhibitory effect of celecoxib, a COX-2 inhibitor, on vascular endothelial growth factor (VEGF) (24). The serendipitous observed clinical response in this case could potentially be explained by the inhibitory effects of the β-blocker and COX-2 inhibitor on the RAS. Our study demonstrates the expression of PRR on the endothelium of VM, and we hypothesize that the observed effect of these medications is via the reduction in plasma renin levels by a β-blocker (25) and mitigation of ATII-induced expression of PRR by a COX-2 inhibitor (26).

The putative primitive endothelial phenotype in VM is partially supported by the demonstration of positive cytoplasmic staining for stem cell growth factor receptor, c-kit, in small lesional vessels, but not in dilated vessels, of VM (27). We have reported a similar pattern of stronger staining for ATIIR1 on the endothelium of smaller lesional vessels, and it is exciting to speculate that the absence of c-kit in dilated lesional vessels may indicate that the latter are more mature and can no longer maintain a putative stem cell population, with the smaller vessels as potential precursors. However, this is a topic of our ongoing research. This observation would therefore suggest that the smaller lesional vessels are the precursors of the more mature and ectatic vessels, but this is beyond the scope of this study.

TIE2 gene mutations have been implicated in VM (7), although the exact mechanism leading to the development of VM has yet to be fully elucidated. Vikkula et al. (8) propose a role in coupling of EC proliferation and SMC recruitment.

A previous study shows that ATII, acting through ATIIR1, stimulates the production of angiopoietin-2 (Ang-2), a ligand for TIE2 (28). Given that Ang-2 modulates the effect of angiopoietin-1 (Ang-1) on TIE2 (29) as well as increases the effects of VEGF. Based on our findings, it is exciting to speculate that increased signaling via ATIIR1 results in increased production of Ang-2, ultimately leading to the development of VM, via activation of TIE2 (8, 29). Figure 6 shows our proposed model for the pathogenesis of VM incorporating a role for the RAS. 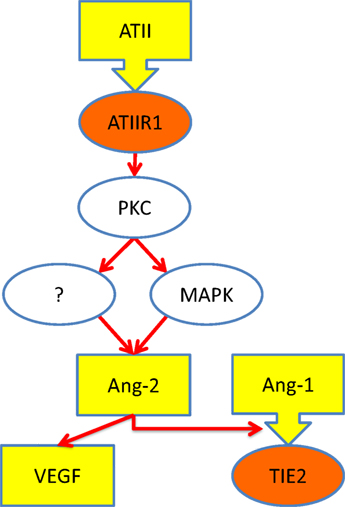 Current treatments of VM aim to relieve symptoms caused by VM, but they often neither halt nor reverse the underlying process that leads to the development and expansion of these lesions, limiting their efficacy (30), and depending on the location of the lesion, may not be feasible.

To the best of our knowledge, this is the first report demonstrating the presence of PRR, ACE, ATIIR1, and potentially ATIIR2 in IM and SC VM. This novel finding suggests the RAS as a potential therapeutic target for VM using RAS modulators.

The content of this article has not been submitted or published elsewhere. There was no source of funding for the article. The authors declare that there is no source of financial or other support, or any financial or professional relationships, which may pose a competing interest. All authors contributed to the preparation of this manuscript. The manuscript has been seen and approved by all authors.

This study was approved by the Central Health and Disability Ethics Committee (ref. no. 13/CEN/130).

We thank Ms. Liz Jones and Dr. Andrea Mikulasova of the Gillies McIndoe Research Institute for their assistance in IHC staining and processing of tissues for NanoString analysis, respectively. SS was supported by a summer scholarship from the Deane Endowment Trust.

The Supplementary Material for this article can be found online at https://www.frontiersin.org/article/10.3389/fsurg.2016.00024

Figure S1. Representative DAB IHC-stained sections of IM (A) and SC (B) VM stained for D2-40 (brown) demonstrating no immunoreactivity except for normal lymphatic vessels in the periphery. Original magnification: 100×.

Figure S2. Positive controls for DAB IHC staining: placenta for PRR [(A), brown], kidney for ACE [(B), brown], liver for ATIIR1 [(C), brown], and kidney for ATIIR2 [(D), brown] and a section of VM as a negative control by omitting the primary antibody [(E), brown]. Original magnification: 400×.

Copyright: © 2016 Siljee, Keane, Marsh, Brasch, Tan and Itinteang. This is an open-access article distributed under the terms of the Creative Commons Attribution License (CC BY). The use, distribution or reproduction in other forums is permitted, provided the original author(s) or licensor are credited and that the original publication in this journal is cited, in accordance with accepted academic practice. No use, distribution or reproduction is permitted which does not comply with these terms.