“SO STONED”: Common Sense Approach of the Dizzy Patient

The history taking of a dizzy patient is of utmost importance in order to differentiate the possible etiologies of vertigo. The key factors that allow a first approximation of diagnosis identification are based on the time profile, symptom profile, and trigger profile of the disease. Here, the proposed mnemonic “SO STONED” comprises eight different dimensions that characterize the vertigo-related complaints of the patient and guide the clinician in his or her decision scheme. All the letters “SO STONED” have a specific meaning: Symptoms, Often (Frequency), Since, Trigger, Otology, Neurology, Evolution, and Duration. Since the most common vestibular diseases have different fingerprints when all dimensions are considered, this tool can facilitate the identification of the appropriate vestibular diagnosis.

Patients with vertigo and dizziness represent a relatively large group in our society with a 7.4% lifetime prevalence (1). Targeted history taking, clinical bedside examinations, functional testing of the vestibular system, and imaging are instrumental for correct diagnosis and therapy management.

Once stroke is excluded, it remains a challenge to identify the etiology of the vertigo. Hereto, clinicians need a quick and comprehensive assessment tool, comprising a structured overview of all the indispensable history information. Based on the literature and our own experience, we made an inventory of how the most common vestibular disorders manifest themselves. This revealed a set of eight independent but closely related dimensions necessary to discriminate between several diagnoses. The acronym “SO STONED” is a useful tool to memorize these eight questions. Recently, Brandt et al. (3) and Roland et al. (4) proposed a similar concept, without however putting it in an “aide memoire” tool, neither covering all our proposed dimensions. The SO STONED tool increases the likelihood of a proper differential diagnosis, which obviously needs to be confirmed by clinical, laboratory, and imaging examinations.

The letters of the acronym “SO STONED” represent: Symptoms, Often (frequency), Since, Trigger, Otology, Neurology, Evolution, and Duration. Table 1 provides an overview of the different questions that should be asked to the dizzy patient. Table 2 represents typical characteristics of different diseases according to the SO STONED history. Classification of the vestibular diseases was based on the ICD-11 beta version of the WHO classification, which divides vertigo in three different categories, namely acute, episodic, and chronic. Since posterior fossa stroke can manifest itself as acute vertigo, stroke was added to the table of diagnoses.

Table 1. Overview of the SO STONED dimensions and their appropriate questions. 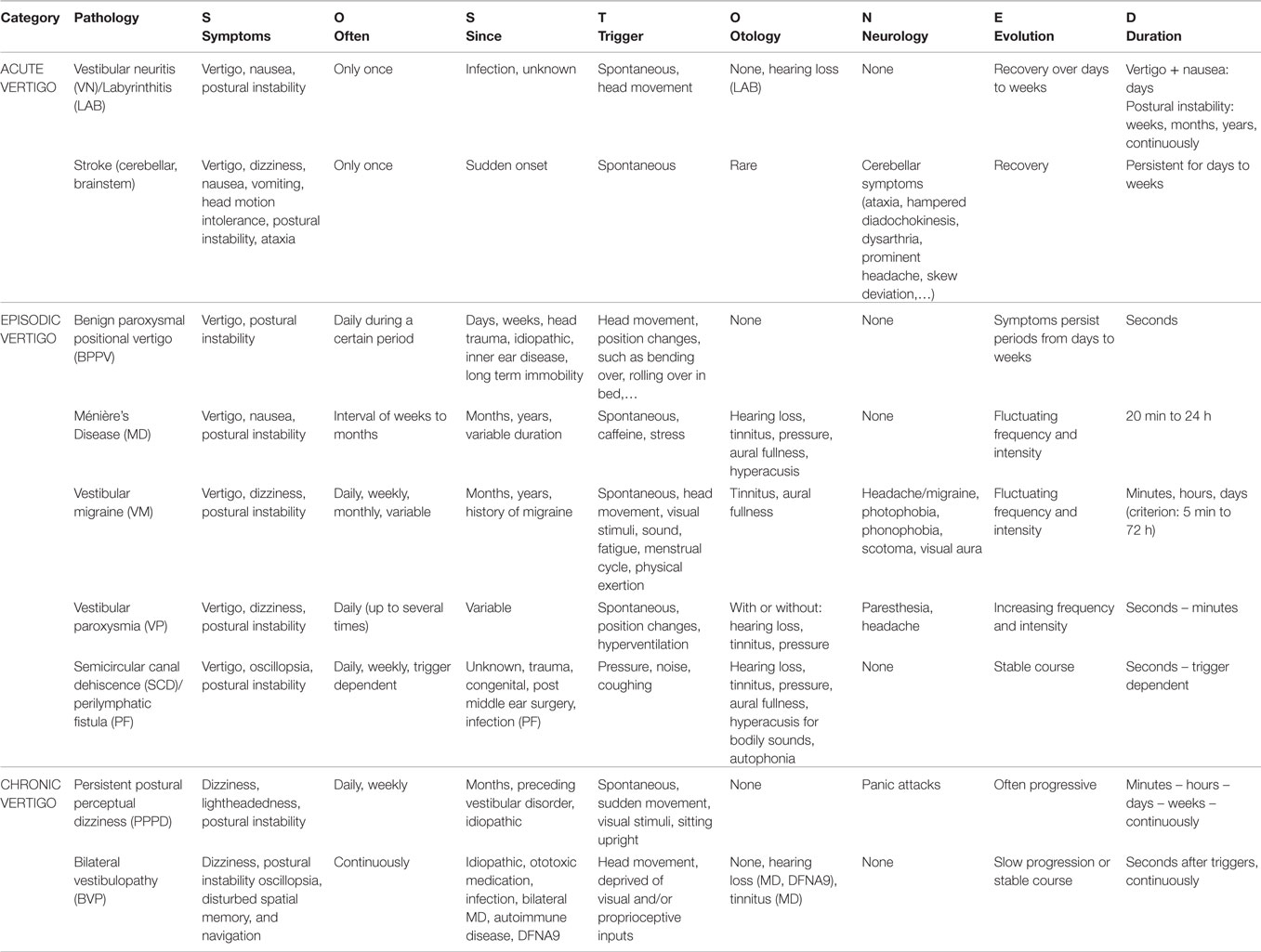 Table 2. Frequent vestibular disorders characterized by the SO STONED dimensions.

The SO STONED tool proposes a systematic approach to the vertigo patient by using the complementary information provided by the different dimensions. Besides the frequent diagnoses presented in Table 2, other less common diagnoses should be taken into account when appropriate. In the following, we provide the rationale of the different dimensions.

Characterization of the symptoms helps to locate the problem. Vertigo or spinning, the illusionary sensation of rotation is primarily referring to semicircular canal-related problems, such as vestibular neuritis (VN), benign paroxysmal positional vertigo (BPPV), superior canal dehiscence, Ménière’s disease (MD), etc. However, vertigo is also a common symptom in stroke (2). Postural instability is mainly typical for bilateral vestibulopathy (BVP) or neurologic disorders, such as polyneuropathy or cerebellar ataxia, although it can occur in other pathologies (see Table 2) (5). Lightheadedness and or dizziness can be caused by panic attacks, agoraphobia and the formerly called phobic postural vertigo, but recently denominated as “persistent postural perceptual dizziness” (PPPD) proposed by the Barany Society and included by the World Health Organisation (WHO)1 in the coming ICD-11 classification. Dizziness is also reported in vestibular migraine (VM), vestibular paroxysmia (VP), BVP, and in stroke (2, 5–7). Some medications can also produce vertigo or lightheadedness. Linear sensations or a tilt of the perceived vertical are more suggestive for otolith dysfunction (8). Drop attacks or a sensation of being pushed to the ground or in another direction are signs of Tumarkin’s otolithic crisis in MD, but beware of VP, VM or brainstem stroke. Lateropulsion as well as oscillopsia occur in general when the labyrinth is affected, but may also occur with central lesions, affecting, e.g., brainstem or the vestibulo-cerebellum.

A single attack of acute vertigo is a hallmark of acute peripheral vestibulopathy [VN or labyrinthitis (LAB)], as well as stroke. Attacks that occur almost daily are typical for BPPV, but also for VM, perilymphatic fistulas (PFs), superior canal dehiscence, and VP. When primarily spontaneous attacks occur several times per day, the likelihood for VM decreases compared to VP. MD triggers vertigo attacks more than once, but the symptom-free intervals are rather weeks to months. Chronic vertigo can also be episodic, where the symptoms severity fluctuates in such a way that some complaints are always present as typical for PPPD. Bilateral or inefficiently compensated unilateral vestibulopathy have a more continuous character.

This item focuses on how long the symptoms already exist. Additionally, it aims to identify specific events that occurred in the past and after which all symptoms started. A head trauma occurring some weeks or days before the first symptoms is suggestive for BPPV, but also semicircular canal dehiscence (SCD) or PF can have started with such an event. A viral illness might have preceded VN, which in turn may induce delayed BPPV. Inefficient compensation after an earlier period of vertigo can lead to chronic subjective dizziness, part of PPPD. Ototoxic medication or autoimmune disorders can lead to BVP.

This refers to a specific act or situation that provokes or aggravates the symptoms. Bending over, lying down, rolling over in bed, and looking up may all trigger short vertigo attacks, typical for BPPV. It is of great importance to discriminate if the symptoms occur during or just after the lying down or after rising up. Vestibular problems due to BPPV should cause vertigo in particular upon lying down, and often also during the upright movement. If problems only occur during the erecting phase, think of cardiovascular etiologies, such as orthostatic hypotension. Rapid head movements causing instability or dizziness are rather hallmarks for a unilateral or bilateral labyrinth dysfunction, but are also aggravating factors for VM and PPPD. VP is often sensitive to gravity changes, because the irritative blood vessel/vestibulocochlear nerve contact may elicit concomitant vertigo spells lasting several seconds, similar to BPPV. Therefore, when position changes with respect to gravity cause the symptoms, VP should be differentiated from BPPV based on the other dimensions of SO STONED and a clinical investigation of the occurring non-BPPV-like nystagmus.

Besides movement triggers, there are also other types of triggers that can elicit or aggravate vertigo attacks. Valsalva maneuver, coughing, or loud sounds that cause vertigo can be attributed to PFs or a third mobile window lesion, e.g., the superior SCD. Acute periods of stress may trigger MD but also aggravate PPPD. Prolonged sleep disturbances (e.g., stress induced) but also alcohol or exertion can precipitate VM. If visual surroundings cause problems, visual vertigo or VM should be considered. Open squares, shopping malls, and crowded spaces can cause panic attacks that may present with concomitant dizziness, typical for PPPD.

Some vertigo attacks occur completely spontaneously, such as those caused by not only MD, but also VM, VP, and stroke. VN usually starts without a trigger, besides the viral infection, but during the subsequent days each head movement will aggravate the vertigo symptoms. When postural instability is increased in darkness or with unsteady underground, bilateral hypofunction or areflexia could be a differential diagnosis, and in some cases insufficiently compensated unilateral vestibulopathy, particularly when patients are stressed or fatigued.

Sudden hearing loss accompanied by a single attack of vertigo may suggest labyrinthine deficiency. A combination of tinnitus, hearing loss and pressure in the ears or aural fullness, is suggestive for MD, although other pathologies, such as VM, VP, third mobile window lesions, and also tumors of the internal auditory canal and/or the cerebellopontine angle, such as vestibular schwannomas or meningiomas, may occur with some of the above otological complaints. When autophonia or hyperacusis of bodily sounds (hearing eye ball movements or pulsatile tinnitus) are present, third mobile window lesions should be excluded by means of temporal bone imaging and vestibular evoked myogenic potential measurements.

This dimension serves to rule out lesions of the central nervous system, such as posterior fossa ischemia, which could be screened by the HINTS tool (2). Additionally, this dimension aims to identify VM with its typical characteristics, such as headaches, current or past migraine, photophobia, scotoma, phonophobia, paresthesia, diplopia, etc. The absence of specific neurologic symptoms increases the likelihood for peripheral etiologies that present with episodic vertigo attacks, such as MD, BPPV, third mobile window lesions, etc.

Vestibular neuritis is typically very disturbing in the early stage with gradual improvement over days, whereas MD is characterized by sudden attacks, with periods of little to no vertigo in between. All other forms of vertigo typically have a stable course of intensity or are characterized by progressive or fluctuating severity of symptoms. One of the rare vestibular disorders that may worsen over time is PPPD.

The duration dimension has in particular a discriminative power to exclude specific disorders. For instance, MD cannot last seconds to a few minutes, whereas BPPV cannot last hours. Moreover, the dimensions “duration” and “frequency” are closely linked to each other. A single attack, lasting days, can point to LAB or VN, while short but frequent attacks in the order of seconds suggest rather BPPV, VM, VP, PF, or third mobile window lesions. It should be noted that VM can last from seconds (accumulated per day to a total of 5 min) to 72 h (7).

To discriminate between these diagnoses, the combination with the dimension “trigger” and concomitant “neurological” and “otological” signs is crucial. Less frequent attacks that last hours are likely to represent MD or VM. The combination with other dimensions is the key factor using the SO STONED acronym and provides a fingerprint of specific diseases. Clinical examinations, auditory and vestibular tests, and imaging obviously should be done.

The acronym “SO STONED” is suggested to cover eight different dimensions while taking the systematic history in a vertigo patient. Since the most common vestibular diseases have different fingerprints when all dimensions are considered, this tool can facilitate the identification of the appropriate diagnosis.

The authors declare that the research was conducted in the absence of any commercial, financial, or other relationships that could be construed as a potential conflict of interest.

We thank Adolfo Bronstein from the Neurotology unit of the Imperial College in London for his valuable comments.

Copyright: © 2016 Wuyts, Van Rompaey and Maes. This is an open-access article distributed under the terms of the Creative Commons Attribution License (CC BY). The use, distribution or reproduction in other forums is permitted, provided the original author(s) or licensor are credited and that the original publication in this journal is cited, in accordance with accepted academic practice. No use, distribution or reproduction is permitted which does not comply with these terms.