Oral cavity cancer is the sixth most common cancer worldwide (1), with over 90% being squamous cell carcinoma (SCC) (1). Oral cavity squamous cell carcinoma (OCSCC) may arise from sites of leukoplakia or erythroplakia involving the oral squamous epithelium (2, 3), characterized by its dysplastic morphology. Late-stage disease often presents with nodal metastases and less commonly, metastasis to the lung, brain, bone, and liver (2, 3).

Oral cavity squamous cell carcinoma affects the oral tongue, floor of the mouth, buccal mucosa, hard palate, mandibular and maxillary alveolus, vestibule of mouth, and retromolar trigone (4, 5). While buccal mucosal squamous cell carcinoma (BMSCC) accounts for <10% of all OCSCC in the Western world (4, 6), it is the most prevalent OCSCC in South East Asia and South Asia (6, 7). This high prevalence is primarily due to the practice of betel nut chewing (6, 7), and/or alcohol consumption (8) and/or tobacco use (5), although recent studies suggest other non-lifestyle contributing factors (5). Due to the particularly aggressive nature of this cancer (9), patients with BMSCC have a high locoregional recurrence rate of up to 57% with associated poor survival (10). Despite improvements in diagnosis and treatments, 5-year survival rates have remained around 50% since the early 1980s (4–7). Current treatment of BMSCC involves a multimodal approach (11), usually requiring surgical resection with postoperative adjuvant radiotherapy (RT) and occasionally chemotherapy (ChT), especially in cases with adverse features, such as positive surgical margins and/or extracapsular spread of the nodal metastases (11).

It has been proposed that the development and spread of many cancers (12–14), including OCSCC (15), are driven by a subpopulation of cancer cells known as cancer stem cells (CSC) (12). Recent studies have identified these CSC in OCSCC by their expression of the embryonic stem cell (ESC) markers, NANOG (15), SOX2 (16), SALL4 (17), phosphorylated (activated) form of signal transducer and activator of transcription 3 (pSTAT3) (18), and OCT4 (15, 16). NANOG is a transcription factor that controls cell proliferation, migration, and invasion (19). SOX2 is critical for the self-renewal properties of ESC (16). OCT4 is a POU domain transcription factor associated with cell self-renewal, proliferation, and pluripotency (16) and works synergistically with SOX2 to regulate pluripotency of ESC (19). This pluripotency network also includes additional factors, such as SALL4, a transcriptional activator of POU5f1 that maintains embryonic pluripotency by modulating the expression of OCT4 (20), and pSTAT3, which is required for tumor formation and growth, and suppression of apoptosis (21). The cell surface marker CD44 is a multistructural and multifunctional CSC marker associated with angiogenesis, cell proliferation, migration, and differentiation (22), as well as some progenitor cell properties (23). Unlike progenitor cells and differentiated cells, CSCs possess the ability for self-renewal and multilineage differentiation through either asymmetric or symmetric cell division (12). It has been reported that the presence of CSC is associated with both a greater capacity for tumor growth and a worsening prognosis (13, 15). This is supported by the idea that CSC have unique abilities to resist cell damage and may represent critical mediators for both RT and ChT resistance (24).

This study investigated the expression, within moderately differentiated buccal mucosa squamous cell carcinoma (MDBMSCC), of the ESC markers NANOG, SOX2, SALL4, pSTAT3, OCT4, and CD44, at both the transcriptional and translational level, to identify and characterize the putative CSC population.

Previously untreated MDBMSCCs from five male and one female patients, aged 38–80 (mean, 59) years, were used in this study, which was approved by the Central Health and Disabilities Ethics Committee (ref. no. 12/CEN/74).

Representative 4 μm-thick, formalin-fixed, paraffin-embedded sections of three MDBMSCC samples from the original cohort of six patients used for DAB IHC staining were used for mRNA colorimetric in situ hybridization (CISH). Staining was done on the Leica Bond Rx auto-stainer and detected using the ViewRNA red stain kit (Affymetrix, Santa Clara, CA, USA), as previously described (35). The probes used for NANOG (NM_024865), SOX2 (NM_003106), SALL4 (NM_020436), STAT3 (NM_003150), and OCT4 (NM_002701) were obtained from Affymetrix. Positive controls used were human IH for SALL4 and human seminoma for NANOG, SOX2, OCT4, and STAT3. A negative control for the primary antibody was done on a sample of MDBMSCC from the CISH cohort by omitting the probe.

Hematoxylin and eosin staining confirmed the appropriate histological grading and the presence of MDBMSCC on the slides used for DAB IHC staining (data not shown). 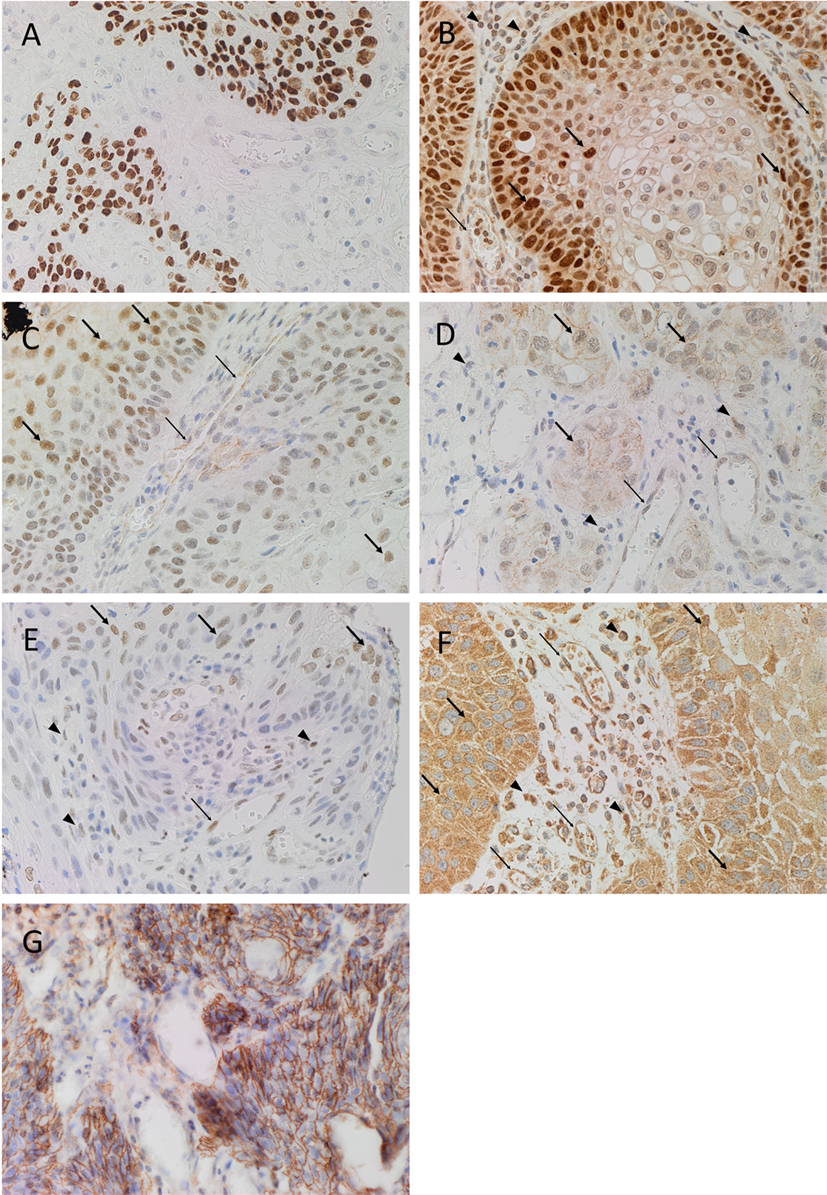 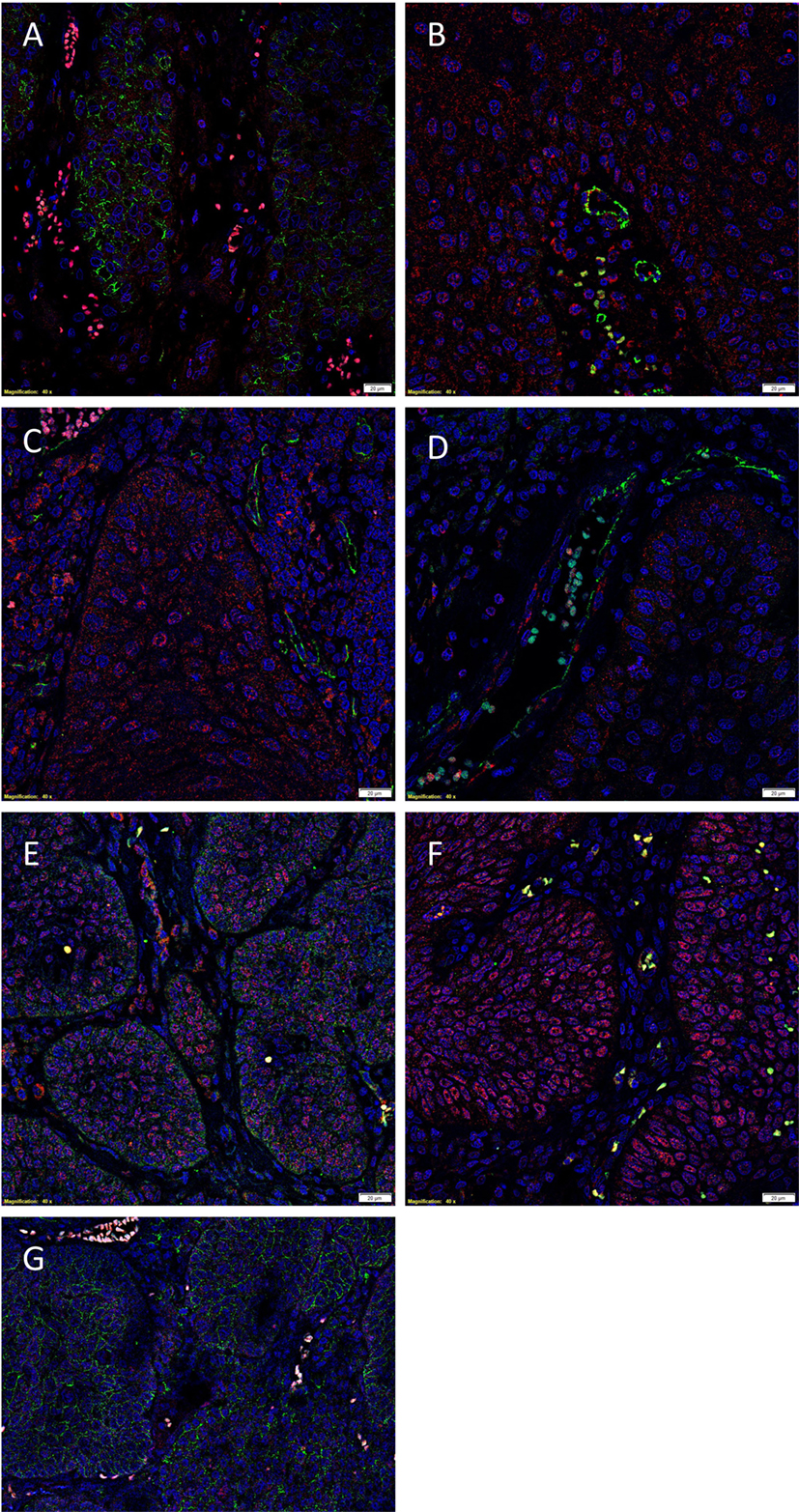 NanoString analysis confirmed the presence of the mRNA transcripts for NANOG, OCT4, SALL4, SOX2, STAT3, and CD44, in MDBMSCC samples of all five patients, while SALL4 was detected in four of the five samples (Figure 3). 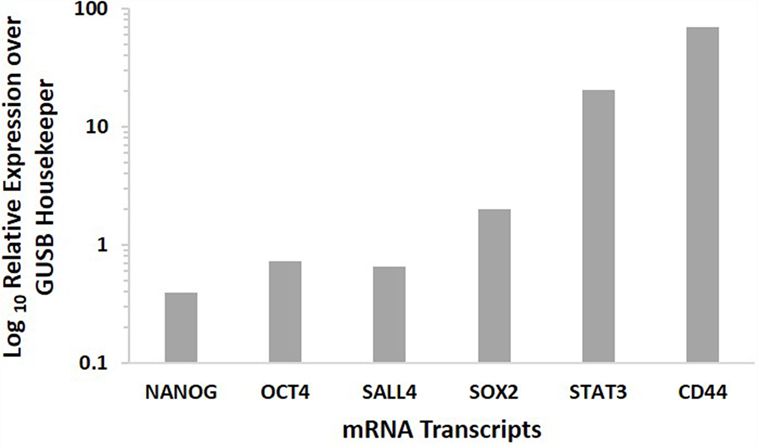 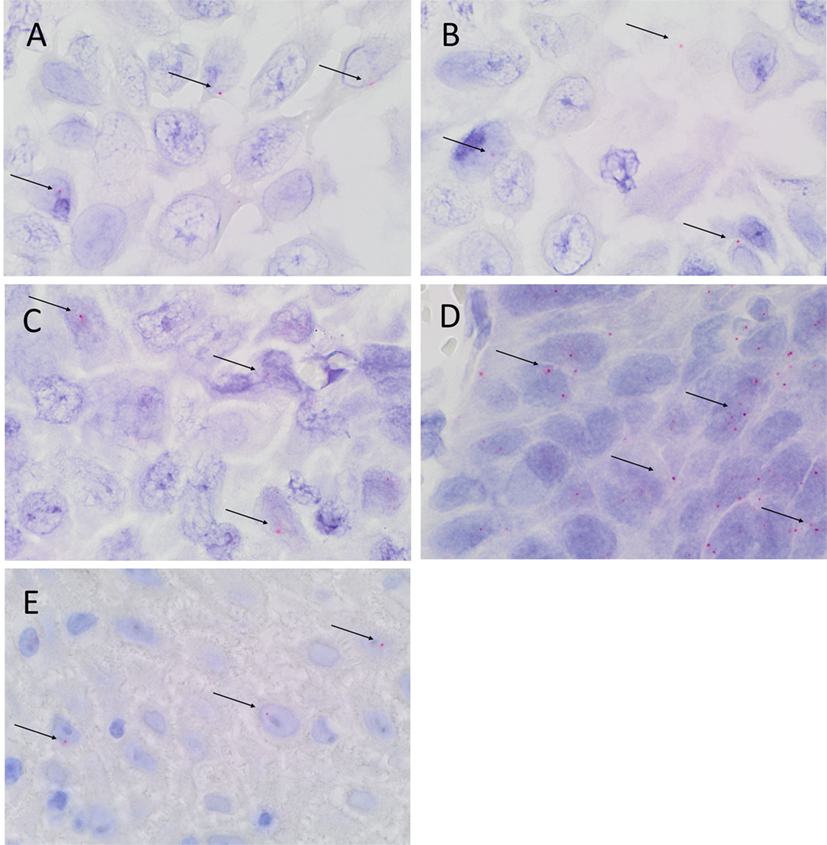 The recent literature supporting the concept of CSC in carcinogenesis has reported on the presence of these cells in multiple cancer types (12–14). The findings of this study further support previous reports on the presence of CSC in OCSCC (15, 36). The discovery of more than one subpopulation of putative CSC within MDBMSCC expressing ESC markers is novel. The detection of a EMA+/CD44+/SOX2+/OCT4+/SALL4+/pSTAT3+/NANOG+ subpopulation within the tumor nests aligns with recent literature reporting localization of CSC in OCSCC (15, 36), particularly at the “tumor front” (37). To the best of our knowledge, this is the first report demonstrating a EMA−/CD34+/CD44−/SOX2+/OCT4+/SALL4+/pSTAT3+/NANOG+ subpopulation on the endothelium of the microvessels, and a separate EMA−/CD44−/CD34−/SOX2+/OCT4+/SALL4+/pSTAT3+/NANOG+ subpopulation within the stroma of MDBMSCC. It is exciting to speculate that the abundant expression of these ESC markers, and therefore CSC, which are known to be associated with cell proliferation, invasion, and inhibition of cell death (19), is a reflection of the particularly aggressive nature of this cancer.

This novel demonstration of the co-expression of ESC markers within the endothelium of the microvessels and the cells within the stroma may be a result of an epithelial-to-mesenchymal transition (EMT) and vascular mimicry, which have been previously demonstrated within breast (40) and head and neck (41) cancers. It is exciting to speculate that the CSC in MDBMSCC undergo EMT and preferentially express OCT4, pSTAT3, SOX2, and NANOG and potentially lose the expression of EMA and CD44, as none of these cells outside of the tumor nests express EMA or CD44. A reason for this is the potential loss of the relatively more downstream markers EMA and CD44, as the cells adopt a more stem-like phenotype with the ability to undergo EMT (42). This would be consistent with a previous report demonstrating the increased expression of the EMT-associated genes, twist and snail1, in the stromal population of pharyngeal SCC (43). Alternatively, these three CSC subpopulations may be distinct from one another, each playing a vital role in carcinogenesis. However, this is beyond the scope of this study.

The expression of ESC markers by the endothelium of the microvessels demonstrated by IHC and CISH staining is fascinating and merits further investigation. Curiously, while all five ESC markers were demonstrated using IHC staining, NanoString analysis confirmed the presence of the mRNA transcripts CD44, NANOG, OCT4, SOX2, and STAT3 in all the MDBMSCC samples from all five patients, while SALL4 was detected in only four of the five samples. A possible reason for this is the heterogeneous nature of cancer tissues. The abundance of cells within MDBMSCC expressing stem cell markers demonstrated by us is consistent with similar reports on hypopharyngeal SCC (44). Our findings of OCT4 expression in the tumor nests is similar to that reported by Ge et al. (44) showing OCT4 staining within hypopharyngeal SCC. However, we have also demonstrated the presence of an independent OCT4+ subpopulation within the stroma, consistent with the findings of Huang et al. (16).

Our demonstration of the presence of three putative CSC subpopulations within MDBMSCC adds further insight into the biology of this disease, highlighting a potential vital role for CSC in tumor growth and development, locoregional and distant metastatic spread, and resistance to RT and ChT. A greater understanding of the CSC, by characterizing the subpopulations in well and poorly differentiated BMSCC lesions using these same markers, as well as further investigations into their microenvironment and their regulatory pathways, may reveal novel therapeutic targets for this aggressive cancer.

This study was approved by Central Regional Health and Disability Ethics Committee (ref. no: 12/CEN/74).

The authors declare that the research was conducted in the absence of any commercial or financial relationships that could be construed as a potential conflict of interest. TI, PFD, and STT are inventors of the PCT patent application (No. PCT/NZ2015/050108) Cancer Diagnosis and Therapy.

The authors thank Ms. Liz Jones of the Gillies McIndoe Research Institute for their assistance in IHC and CISH staining. HHY and TF were supported by summer scholarships from the Deane Endowment Trust. TI was supported, in part, by the Pacific Emerging Researcher First Grant, Health Research Council of New Zealand (grant no. HRC 16/434).

The Supplementary Material for this article can be found online at https://www.frontiersin.org/article/10.3389/fsurg.2016.00046

37. Jouppila-Mättö A. Epithelial-mesenchymal transition and expression of its transcription factors in pharyngeal squamous cell carcinoma. Publication of the University of Eastern Finland Dissertations in Health Sciences. Koupio: University of Eastern Finland (2014). Available from: http://epublications.uef.fi/pub/urn_isbn_978-952-61-1624-2/urn_isbn_978-952-61-1624-2.pdf

Copyright: © 2016 Yu, Featherston, Tan, Chibnall, Brasch, Davis and Itinteang. This is an open-access article distributed under the terms of the Creative Commons Attribution License (CC BY). The use, distribution or reproduction in other forums is permitted, provided the original author(s) or licensor are credited and that the original publication in this journal is cited, in accordance with accepted academic practice. No use, distribution or reproduction is permitted which does not comply with these terms.