Postoperative vision loss (POVL) following non-ocular surgery is a serious complication where the causes are not fully understood. Studies have identified several causes of POVL as well as risk factors and prevention strategies. POVL research is made difficult by the fact that cases are often subject to malpractice claims, resulting in a lack of public access to case reports. This literature review was conducted in order to identify legal issues as a major barrier to studying POVL and address how this affects current knowledge. Informed consent provides an opportunity to overcome legal challenges by reducing malpractice litigation through educating the patient on this outcome. Providing pertinent information regarding POVL during the informed consent process has potential to reduce malpractice claims and increase available clinical information.

Postoperative vision loss (POVL) during non-ocular procedures is a devastating complication following surgery under general anesthesia. There is significant variation in the reported incidence of POVL ranging from 0.056 to 1.3% (1). Surgical procedures posing the highest risk for POVL are cardiac (incidence = 0.09%) and spinal surgeries (incidence as high as 0.2%) (2, 3). Etiologies of POVL include ischemic optic neuropathy (ION), central retinal artery occlusion (CRAO), cortical blindness (CB), and corneal abrasion (CA) (4). Strong evidence indicates an increasing incidence of POVL in part due to the rising number of spinal fusion operations (500% from 1993 through 2004) (5). Risk factors for these conditions have been identified; however, the mechanisms are not yet fully understood (4, 6–8). Male gender, prone position during surgery, hypotension, prolonged procedures, longer anesthesia duration, and decreased use of colloids are associated with POVL (9–13). Certain modifiable risk factors are obesity, cardiovascular disease, hyperlipidemia, diabetes mellitus, and smoking (4, 6, 7, 14). We intend to review the medicolegal barriers preventing access to current POVL information and subsequently hindering the advancement of knowledge on this topic (Figure 1).

Figure 1. Neurovasculature of the eye. Arterial supply to the optic nerve and the retina comes from branches of the internal carotid artery. The retina is solely supplied by the central retinal artery. Veins of the retina drain into the cavernous sinus. AION is located anteriorly to the lamina cribosa and is most likely caused by posterior ciliary artery occlusion while Posterior ION (PION) is posterior and results from improper pial vessel supply. Central retinal artery occlusion (CRAO) is a result of emboli and globe compression resulting in a loss of blood supply of the surface layer of the optic disk. Corneal abrasion (CA) is due to inhibition of corneal reflex and decreased tear production.

Vision loss caused by non-ocular surgery poses severe implications for a patient’s quality of life. POVL is frequently involved in malpractice claims complicating the study of its mechanisms and assessment of causative factors (15). Until legal action is resolved, reporting POVL cases can be delayed up to 7 years (16). Although there is no mandated reporting system for POVL, the ASA Closed Claims Project registry was created in 1999 to facilitate physicians’ access to an up-to-date database of vision loss cases after non-ophthalmic surgery (17). In 2014, the project database contained 10,093 claims of which 7,351 were surgical anesthesia claims (18). Non-ocular POVL cases are submitted to the registry without patient, provider, or institutional identifiers in order to protect confidentiality and encourage hospitals to report events of POVL with minimal legal ramifications (19). ASA members are able to request access to search the database; however, such requests are limited to “simple analysis of narrowly defined topics.” (17) Cases submitted to the registry remain protected from public access (17). In 2014, the Agency for Healthcare Research and Quality reported that plaintiff attorneys made numerous requests for release of the POVL registry data to the public. The registry denied public release of the information in accordance with board-approved confidentiality procedures (19). The rarity of this complication and the complexity of reported cases have resulted in a paucity of research on POVL. Because current data are limited, there is no well-established standard of care. The ASA Perioperative Visual Loss Task Force developed a practice advisory focused on perioperative management for patients identified to be at high risk (20). Without a complete understanding of this serious adverse event, advances in establishing POVL management guidelines are hindered.

Research into the underlying pathophysiology of more common causes of POVL, such as CA, has led to more effective prevention strategies and fewer malpractice claims (1, 21, 22) (Table 1). 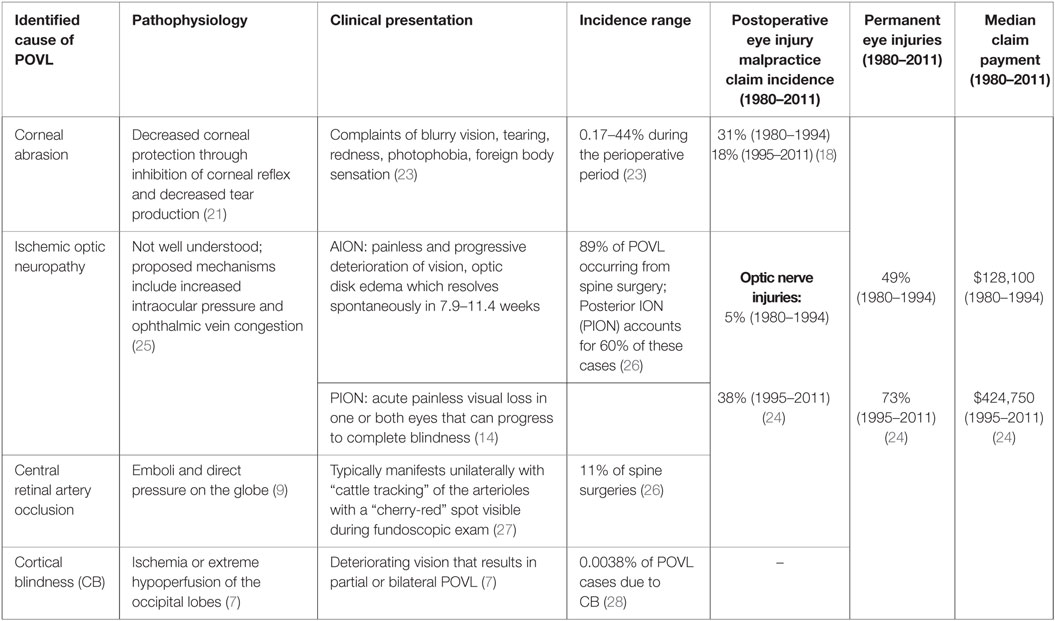 Corneal abrasion while under general anesthesia is a result of decreased corneal protection through inhibition of the corneal reflex and decreased tear production (22). Longer procedures, as well as prone or lateral positioning during surgery, are shown to increase the risk of CA (21). Many institutions have developed prevention strategies for CA (18). Treatment of CA usually involves administration of artificial tears and antibiotic ointment (23). No intervention is completely effective in protection of CA during surgery, but eyelid taping is the single best used protective method. Proper placement of eyelid protection has been shown to decrease the risk of CA (21). CA claims from 1990 or later received a median compensation of $12,000. The registry reports a decrease in the incidence of claims from 31% in 1980–1994 to 18% in 1995–2011, most of them being associated with general anesthesia (18). The reduction in CA malpractice claims from 1980 to 2011 is likely reflective of the effective prevention measures taken by anesthesiologists prior to surgery.

Ischemic optic neuropathy is the most common cause of permanent POVL after non-ocular surgery (26, 29). Prone and Trendelenburg positioning during surgery can increase intraocular pressure (IOP) and cause ophthalmic vein congestion leading to ION, and in some cases, permanent POVL (25, 29). The ASA Postoperative Visual Loss Registry reported that 89% of perioperative vision loss in spine surgery is due to ION, with posterior ION (PION) accounting for 60% of cases (26).

A recent article published by Rubin et al. studied trends in ION incidence in spinal fusion using a large nationwide hospital database from 1998 to 2012 and concluded that perioperative ION in spinal fusion decreased by 2.7-fold. Aging, obesity, male gender, and transfusions were significantly associated with ION (30).

Posterior ION is most commonly associated with operations performed in the prone position and of longer duration, and typically presents as painless loss of vision when the patient awakens from anesthesia (29). While anemia and hypotension are observed in these patients, the exact mechanism by which the ischemia occurs remains unclear. Although predisposing factors have been identified, no single causative mechanism for ION can fully explain the etiology under various surgical circumstances (3). Quraishi et al. published a case where improved vision after surgery in a patient diagnosed with PION was achieved by managing hemoglobin, hematocrit, and systolic blood pressure in order to adequately maintain ocular perfusion (31). Hassani et al. demonstrated that administering recombinant human erythropoietin reversed the effects of PION following a 6 h procedure with significant blood loss (32). The ASA Task Force on Perioperative Visual Loss reports that no complete treatment guideline has been established. The recommendation is that consideration should be given to informing the patient of the “small” and “unpredictable risk” of POVL in high-risk cases and to employ preventative strategies (33).

When the patient notices even slight changes in vision, a thorough physical exam should be performed as the viability of POVL treatment options tend to decline over time. Contractor and Hardman stated that all patients experiencing signs of POVL require urgent review by an ophthalmologist (34).

Central retinal artery occlusion accounts for a small percentage of POVL cases, but is the second most common cause associated with spinal surgery (5). According to the ASA POVL registry, POVL in 11% of spine surgery cases is caused by CRAO (3, 26). CRAO is commonly associated with emboli and direct compression of the globe (9). Unlike PION, CRAO more commonly manifests unilaterally. Prone-positioned surgery increases the risk of CRAO due to external ocular compression produced by the weight of the head against the headrest (5, 15, 33). CRAO is considered reversible if treated within 6 h (35). Treatments including vasodilators, ocular massage, and thrombolytic agents are able to improve visual deficits caused by CRAO, but their effects are poorly demonstrated in ION (22).

Cortical blindness is known as the third major identified cause of POVL in non-ocular surgery. CB is a loss of vision caused by ischemia or extreme hypoperfusion of the occipital lobes. This can manifest as bilateral vision loss ranging from partial to complete (7). Most cases of CB are caused by spontaneous ischemic stroke (32%), cardiac surgery (20%), and cerebral angiography (12%) (36).

Intraoperative factors, such as anesthetic duration, blood loss, position during surgery, and fluid administration, are equally important to consider. The ASA Practice Advisory states that patients should be positioned with their head at the same level or higher than the heart and maintained in a neutral forward position when possible in order to reduce IOP and prevent POVL from occurring (33). The ASA POVL Registry data collected between 1999 and 2012 shows that 94% of ION cases resulted from surgeries performed under general anesthesia for 6 h or longer. It has been suggested that procedures requiring prolonged anesthesia can be staged in order to reduce length of the surgery. If staging is to be used, the patient should be informed of the risk imposed by this type of procedure compared to prolonged anesthesia (33). Although these possible strategies have been suggested, there is no evidence to fully support their use in preventing ION (37).

Due to the different etiologies of POVL and the limited effectiveness of treatments, disclosure of information regarding POVL prior to surgery is appropriate to consider (38). One method to accomplish this disclosure is through informed consent. The case Salgo v Stanford (1957) first used the term informed consent and ruled that informed consent should make known to patients all potential risks, benefits, and alternative treatments before undergoing surgical or anesthetic procedures (38–40). The court’s decision states, “a physician violates his duty to his patient and subjects himself to liability if he withholds any facts … necessary to form the basis of an intelligent consent by the patient to the proposed treatment” (40). Furthermore, the court concluded that physicians were permitted to use discretion in order to withhold facts based upon the patient’s mental and emotional state (39). In the early 1970s, a new version of informed consent doctrine quickly became recognized “in one form or another in virtually every state.” This doctrine dictated that, in addition to giving a patient the decision to consent to or refuse healthcare, a physician was required to provide the patient with all information that a “reasonably prudent person” would find “material” to making this decision (39). One survey published in 2011 determined that out of 437 patients undergoing spinal surgery at Mayo Clinic in Florida, 80% preferred full disclosure of the risks of POVL (38). During an Anesthesia Patient Safety Foundation conference, a consensus was reached regarding discussion of POVL due to ION during the informed consent process of patients considered to be at risk by anesthesiologists and surgeons (41). The informed consent process may further advise patients on occurrence of POVL, risk factors both modifiable and non-modifiable, and prevention strategies without eliminating the risk of developing POVL (41).

Patient-centered guidelines on discussing POVL occurrence, risk factors, and prevention strategies are essential. The rare incidence of POVL and the resulting paucity of publications account for the limited understanding of this complication. Bolstering the data available to physicians and researchers could facilitate better knowledge of POVL pathophysiology, risk factors, and contribute to the development of preemptive measures and treatment techniques to improve patient outcomes.

Copyright: © 2017 Mendel, Stoicea, Rao, Niermeyer, Revilla, Cluse, Sandhu, Todaro and Bergese. This is an open-access article distributed under the terms of the Creative Commons Attribution License (CC BY). The use, distribution or reproduction in other forums is permitted, provided the original author(s) or licensor are credited and that the original publication in this journal is cited, in accordance with accepted academic practice. No use, distribution or reproduction is permitted which does not comply with these terms.