Gijsbert A. Van Zanten1,2 and

Study design: This study is a secondary analysis as part of a multicenter randomized controlled trial.

Methods: Thirty-eight postlingually deafened adults were included in the original trial, in which the presence of tinnitus was not an inclusion criterion. All participants received cochlear implants (CIs) because of profound hearing loss. Nineteen participants received bilateral CIs simultaneously and 19 participants received bilateral CIs sequentially with an inter-implant interval of 2 years. The prevalence and severity of tinnitus before and after simultaneous and sequential bilateral cochlear implantation were measured preoperatively and each year after implantation with the Tinnitus Handicap Inventory (THI) and Tinnitus Questionnaire (TQ).

Results: The prevalence of preoperative tinnitus was 42% (16/38). One year after bilateral implantation, there was a median difference of −8 (inter-quartile range (IQR): −28 to 4) in THI score and −9 (IQR: −17 to −9) in TQ score in the participants with preoperative tinnitus. Induction of tinnitus occurred in five participants, all in the simultaneous group, in the year after bilateral implantation. Although the preoperative and also the postoperative median THI and TQ scores were higher in the simultaneous group, the median difference scores were equal in both groups. In the simultaneous group, tinnitus scores fluctuated in the 3 years after implantation. In the sequential group, four patients had an additional benefit of the second CI: a total suppression of tinnitus compared with their unilateral situation.

Conclusion: While bilateral cochlear implantation can have a positive effect on preoperative tinnitus complaints, the induction of (temporary or permanent) tinnitus was also reported.

As the results of the above-mentioned studies are contradictive, no firm conclusions can be drawn about the additional effect of a second CI on tinnitus. Therefore, the aim of the current study was to investigate the tinnitus outcomes 1 year after bilateral cochlear implantation. Secondarily, the tinnitus outcomes in simultaneously and sequentially bilaterally implanted patients were compared. Furthermore, the long-term (3 years) tinnitus outcomes of both study groups were investigated.

This study was approved by the Human Ethics Committees of all participating centers (NL2466001808), and was registered in the Dutch Trial Register (NTR1722). Written informed consent was obtained from all participants.

Data for the current study were collected as a secondary outcome measure as part of a multicenter randomized controlled trial (RCT). The aim of this RCT was comparing simultaneous bilateral cochlear implantation (simultaneous group) to sequential bilateral cochlear implantation with an inter-implant period of 2 years (sequential group) in adult participants with severe to profound bilateral postlingual SNHL (14, 15). 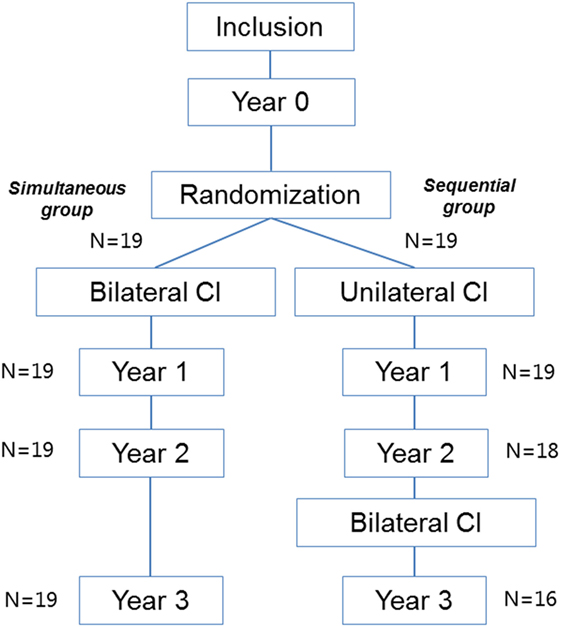 Figure 1. Flowchart of the study design.

The TQ consists of 52 questions on emotional and cognitive distress, intrusiveness, auditory perceptual difficulties, sleep disturbance, and somatic complaints. The answer options are “true,” “partly true,” and “not true,” and correspond to scores of 2, 1, and 0, respectively. Forty out of these 52 questions are used to compute the total TQ score (18).

The questionnaires are available in Dutch and a higher score indicates a higher burden of tinnitus.

Tinnitus burden was a secondary outcome of the original RCT (14, 15). The sample size of this RCT was based on the primary outcome, which was the speech-intelligibility-in-noise. For the current study, the sample size needed to detect statistically significant changes in tinnitus scores after cochlear implantation appeared to be at least 24 participants with preoperative tinnitus. As the presence of tinnitus was not an inclusion criterion of the RCT, the proportion of participants with preoperative tinnitus (n = 16) was lower than 24. The chance of detecting a true effect is therefore reduced and therefore we decided to only perform a descriptive analysis of the results.

Tinnitus questionnaire scores were calculated for all participants preoperatively and each year postoperatively. In case of >10% missing data, meaning more than two questions on the THI and more than four questions on the TQ, participants would be excluded from analysis. The THI and TQ were analyzed separately since they have different clinimetric properties and measure tinnitus burden in a different way. Of the THI, the total score was calculated by the sum of all 25 questions. Of the TQ, the total score was calculated by the sum of 40 out of the 52 questions as stated by the manual (18). A participant was considered to have tinnitus when they reached a score higher than zero on either of the questionnaires.

None of the results were normally distributed, therefore we reported medians and IQRs. All data were analyzed using SPSS for Windows version 21.0. 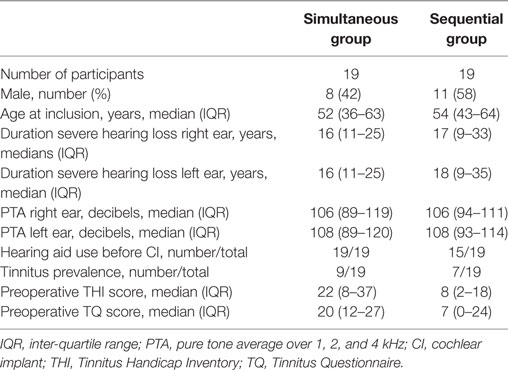 Loss to Follow-up and Missing Data

In the sequential group, three participants did not receive their second CI due to withdrawal from the study for personal reasons (n = 2) and central deafness due to rhesus antagonism that was missed at inclusion (n = 1) (Figure 1). Therefore, the 2- and/or 3-year THI and TQ results of these patients were missing. In one other patient, the 3-year TQ results were missing. 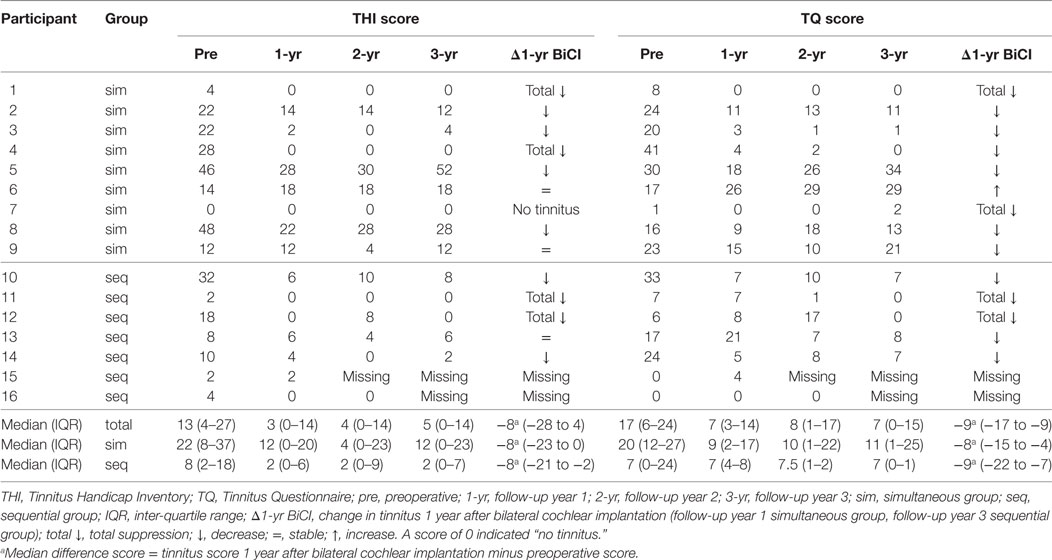 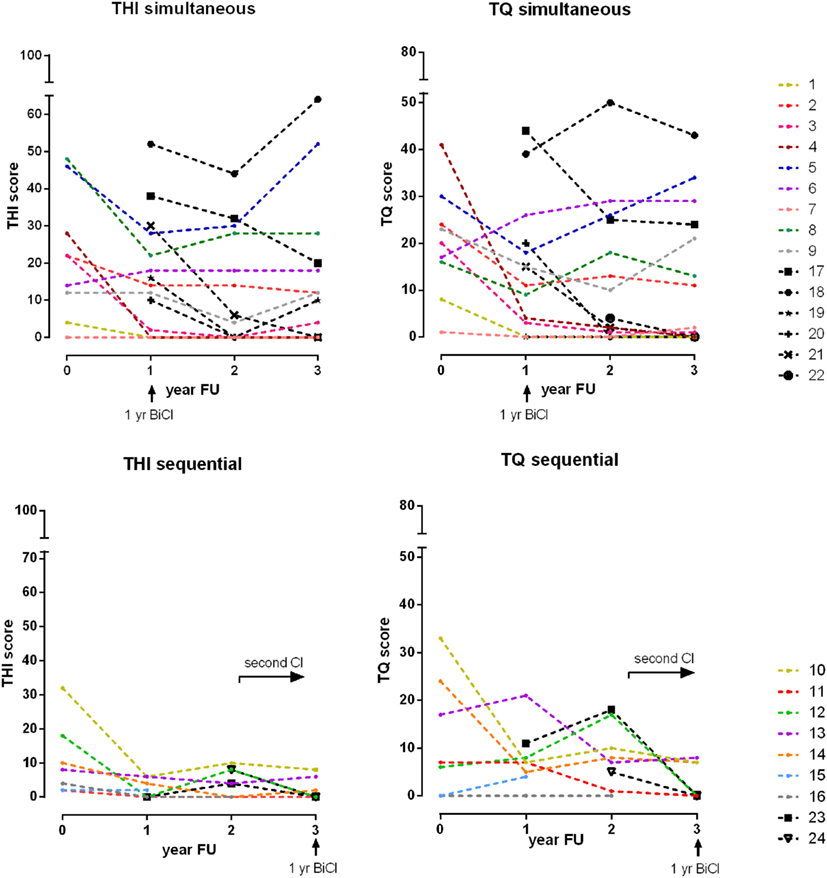 Although the preoperative and also the postoperative median THI and TQ scores were higher in the simultaneous group, the median difference scores were equal in both groups (Table 2). 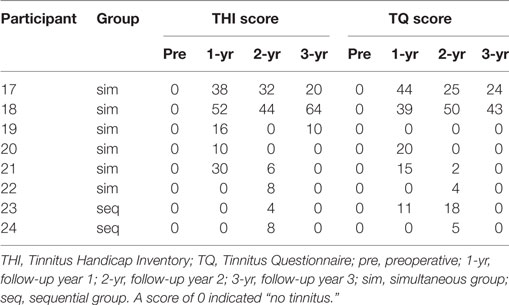 In the simultaneous group, tinnitus scores fluctuated in the 3 years after implantation. Total suppression or decrease of tinnitus burden occurred in four out of nine participants. In the sequential group, low median preoperative tinnitus scores were reported and the tinnitus had disappeared or decreased in four out of seven participants after a 3-year follow-up period. Two participants did not receive a second CI and were therefore unavailable for follow-up. Four participants had an additional benefit of the second CI: a total suppression of tinnitus compared with their unilateral situation.

Literature on the effect of sequential bilateral cochlear implantation on tinnitus is scarce and the combination of studies that exist showed inconclusive results. Olze et al. (12) found a beneficial effect of the second CI: a further decrease of tinnitus scores in the participants with preoperative tinnitus (n = 28). However, Summerfield et al. (11) found a negative effect of the second CI: increase of tinnitus scores in the whole study group (n = 24), due to increased tinnitus in 7 of 16 participants with preoperative tinnitus and newly induced tinnitus in 4 of 8 participants without preoperative tinnitus. A possible reason for the discrepancy between these two studies is the difference in tinnitus outcome measurements: Olze et al. used the TQ and Summerfield et al. used a questionnaire concerning tinnitus annoyance (11, 12). In our study, four participants had an additional positive effect of the second CI on their tinnitus burden. The previous studies as well as the current study are studies with a small sample size. Therefore, no firm conclusions can be drawn. To our knowledge, no previous studies on simultaneous bilateral implantation and tinnitus are published.

As the design of this study is an RCT, all data were prospectively collected at fixed moments and the same validated questionnaires were used in all participants to measure tinnitus burden. Besides, this is the first study which reports on the effect of simultaneous and sequential bilateral cochlear implantation on tinnitus and therefore this study provides additional evidence to the scarce knowledge.

A limitation of our study is the small sample size, which led to a low statistical power. Therefore, only descriptive analyses of the data were performed. However, it is important to report all outcome measures of an RCT and this study adds knowledge to this field with only two previous studies whose results are contradictive.

Another drawback is the lack of some participant characteristics concerning tinnitus, such as the type of tinnitus, the laterality of tinnitus, and the average and maximum loudness of tinnitus. Also, we did not have information concerning psychological burden of the patients (e.g., anxiety and depression), which is known to affect tinnitus and the overall outcome after cochlear implantation (22). Besides, we assumed the patients suffered from subjective tinnitus; however, we did not specifically evaluate the possibility of somatic modulation, for example. Moreover, we did not have information concerning differences in tinnitus burden with the CI switched “on” and “off” and information concerning the exact time the CI has been worn was also lacking. Another limitation is the difference in preoperative tinnitus severity between the two study groups. This could have resulted in biased postoperative tinnitus outcomes. Tinnitus was a secondary outcome measure in the current study and not the primary complaint of the participants, neither the indication for cochlear implantation. Within the current study, no other tinnitus treatment or personalized medicine was offered to the patients (23).

Furthermore, the measurement of tinnitus is difficult, since it is a subjective symptom and consensus on which questionnaire should be used in a clinical trial is lacking (24). In addition, as holds for the majority of questionnaires, both of the used questionnaires are not validated to measure the effectiveness of an intervention (25). For this reason, the Tinnitus Functional Index was developed in 2012 (which was after the start of the current study (26)). For the THI and TQ, however, the clinically relevant change in scores before and after treatment has been investigated by one study for each questionnaire (19, 20). We used the MIC scores reported in these studies, but it may be questioned whether these MIC scores are representative as for both the THI and TQ, only one study examined these scores. Since there are multiple methods to obtain the MIC and a standard method is lacking, it is plausible that a MIC detected with different methods can vary widely (27). Besides, it is questionable whether these MIC scores are also usable in CI patients as the MIC scores are determined in groups of chronic tinnitus patients. A previous study in chronic tinnitus patients showed a mean THI score of 45 (SD: 23) and TQ score of 40 (SD: 17), both scores are much higher than the preoperative scores we found in the current study (28). This indicates that CI patients with tinnitus may differ from chronic tinnitus patients in terms of tinnitus scores and severity and therefore it is possible that also the MIC scores of the THI and TQ differ in CI patients. The relatively low preoperative tinnitus scores in our study population could also have led to floor effects, which means that it is more difficult to detect improvement.

The present study provides additional evidence to the scarce knowledge on the effect of bilateral cochlear implantation on tinnitus. In general, bilateral cochlear implantation had a positive effect on preoperative tinnitus complaints. The induction of (temporary or permanent) tinnitus was also reported and this should always be taken into account when counseling a patient.

This study was carried out in accordance with the recommendations of the medical ethics committee (MEC) of the Academic Medical Center (AMC) with written informed consent from all subjects. All subjects gave written informed consent in accordance with the Declaration of Helsinki. The protocol was approved by the MEC AMC. This study was also registered in the Dutch Trial Register (NTR1722).

We thank all our participants who have been invaluable for this research. We thank Nadia Hendrice, Bert Maat, Jeroen J. Briaire, and Emmanuel A. M. Mylanus for their effort in the early stages of this RCT. We thank Advanced Bionics for supporting our study with a non-restrictive research grand.

For this study, all centers received the second cochlear implant from Advanced Bionics®. Advanced Bionics® in part sponsored this study. This company did not have any influence on the data collection, data analysis, data interpretation, or study design.

Copyright: © 2017 Ramakers, Kraaijenga, Smulders, van Zon, Stegeman, Stokroos, Free, Frijns, Huinck, Van Zanten and Grolman. This is an open-access article distributed under the terms of the Creative Commons Attribution License (CC BY). The use, distribution or reproduction in other forums is permitted, provided the original author(s) or licensor are credited and that the original publication in this journal is cited, in accordance with accepted academic practice. No use, distribution or reproduction is permitted which does not comply with these terms.