Conclusion: The novel finding of three CSC subpopulations within CAML provides insights into the biology of CRC.

Colorectal cancer has been attributed to a complex heterogeneous interaction of lifestyle factors and genetic predisposition. Regular consumption of red meats and alcohol, and inflammatory bowel disease such as ulcerative colitis, are known risk factors for CRC (4). Three major genetic/molecular pathways have been implicated in the development of CRC: chromosomal instability pathway (CIP), microsatellite instability pathway (MSI), and CpG island methylator phenotype pathway (CIMP) (2, 5, 6). Of these, CIP appears to be the most relevant in the pathogenesis of CRC (2, 5, 6).

The survival time for untreated CRC patients with liver metastasis remains at 5–20 months (8). Liver resection is the mainstay treatment for CRC metastatic to the liver (CRCML) and it is the only intervention that significantly increases life expectancy, with a 5-year survival rate of up to 58% (7, 8). However, only 20% of patients with CRCML are operable at time of diagnosis (7). Chemotherapy plays a palliative role if used as a primary treatment, so recent focus has been on neoadjuvant chemotherapy to downstage the metastatic liver disease to increase operability (7, 8).

Stem cells are essential to the growth and development as well as the maintenance of human tissues, with the key abilities of self-renewal and maintenance of pluripotency, and differentiation through asymmetrical division (9–11).

The cancer stem cell (CSC) concept of cancer proposes that a subpopulation of cells within the cancer possess properties of embryonic stem cells (ESCs) and are thought to be the quintessential drivers of carcinogenesis due to their ability to promote angiogenesis, invasion, metastasis, and resistance to apoptosis as well as hijacking stem cell properties (12, 13).

OCT4 ensures the survival of ESCs through maintenance of the pluripotent state and self-renewal capabilities (11, 13, 14). SOX2 and OCT4 act in partnership and indispensably together to regulate the expression of genes specific for maintaining stem cell pluripotency and self-renewal (11, 15). NANOG also contributes to the transcriptional factor regulatory network involved in maintaining the key properties of stem cells, facilitated through control of genes maintaining pluripotency (16). c-Myc is a proto-oncogene with a significant role in fundamental cellular process and is involved in generation of induced pluripotent cells through activation of downstream targets which enhance proliferation and transformation of cells (16, 17). KLF4 is involved in regulation of the cell cycle, somatic cell reprogramming, and pluripotent characteristics (18).

A number of other stem cell markers associated with CRC CSCs have also been reported in the literature. CD44 is a cell surface glycoprotein with a number of roles in regulating cellular structure and cell–cell interactions (19, 20). Overexpression of CD44 has been implicated in early colorectal carcinogenesis, with CD44 knockdown preventing this process (19, 20). Leucine-rich repeat-containing G protein-coupled receptor 5 (LGR5) is a marker specific to crypt base columnar cells (CBCs) which are undifferentiated stem cells that give rise to the colonic mucosa (19). LGR5 knockdown results in tumor regression (21). Epithelial cell adhesion molecule (EpCAM) is a marker unique to epithelial cells and consequently tumors of epithelial morphology, with functions in cell signaling, and regulating processes such as proliferation, differentiation and metastasis (19). EpCAM+ cells have also been extensively characterized as CRC CSCs (19).

Colorectal adenocarcinoma metastasis to the liver samples from nine male patients aged 50–80 (mean, 65) years from the Gillies McIndoe Research Institute Tissue Bank were used for this study which was approved by the Central Health and Disabilities Ethics Committee (ref. no. 15/CEN/106). Written informed consent was obtained from patients included in this study.

Statistical analysis for comparison of markers demonstrated by DAB IHC and CISH staining was performed to determine significance. Total counts of cells that stained positively and those that stained negatively for each ESC marker within the TNs and the peritumoral stroma were collated. The proportion of positive staining cells was calculated for each marker in both the TNs and peritumoral stroma. χ2 tests were then carried out using the Quantpsy (www.quantpsy.org) software to determine statistical significance with regards to the proportional expression of each marker, and related t-tests were used to compare the proportional expression of each ESC marker within the TNs against those within the peritumoral stroma using SPSS V.24.

Hematoxylin and eosin staining confirmed the presence of CAML on the slides, distinguishing CAML from normal liver architecture and identifying two distinct populations of cells within adenocarcinoma glandular TNs and the peritumoral stroma (Figure S1A in Supplementary Material). 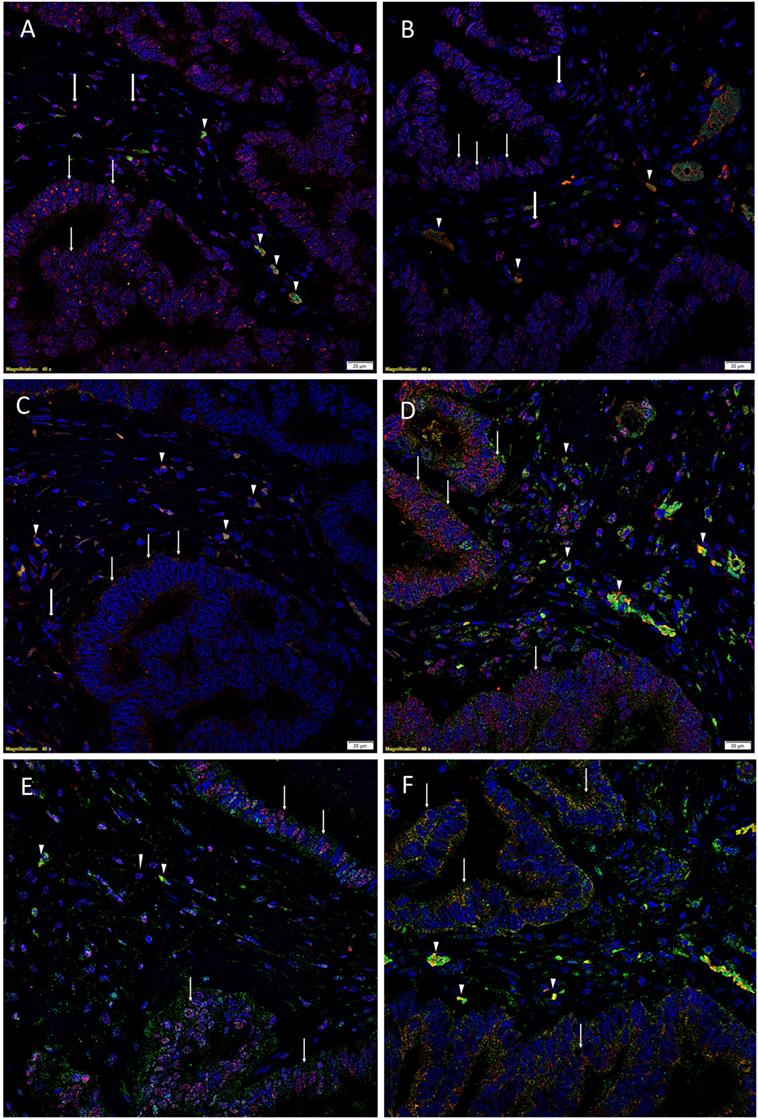 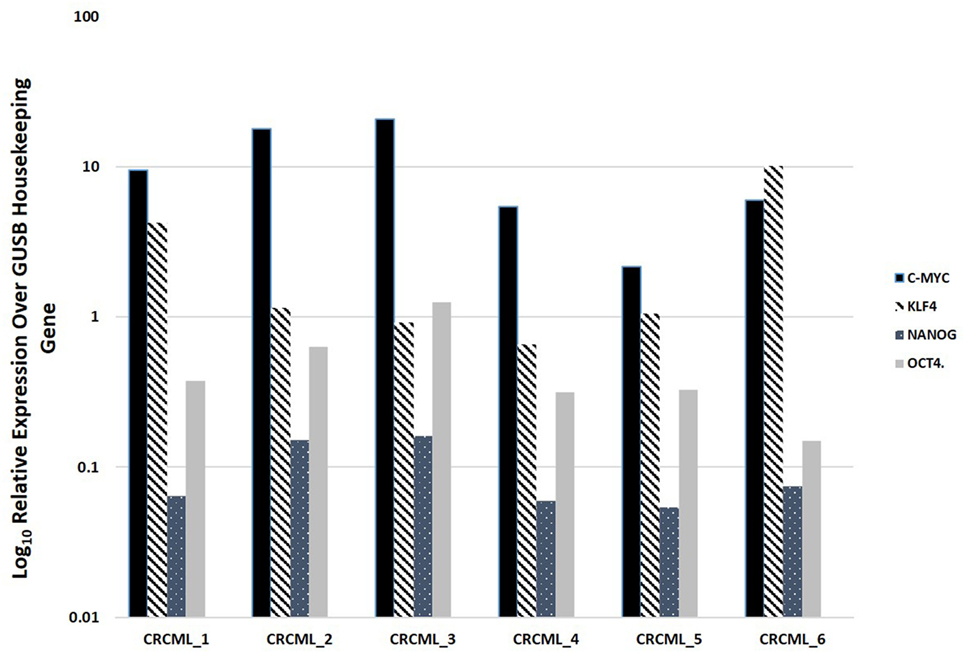 Figure 2. Expression of mRNA transcripts of c-Myc, KLF4, OCT4, and NANOG in colon adenocarcinoma metastasis to the liver samples from six patients, normalized against the GUSB housekeeping gene. The expression of SOX2 was below detectable level.

Statistical analyses of the results of cell counting of DAB-stained slides showed that there was statistically significant difference between the mean proportions of OCT4+, SOX2+, NANOG+, and KLF4+ cells in the peritumoral stroma compared to those within the TNs (p < 0.05), but there were no significant differences for c-Myc (p > 0.05) (Figure 3A). When comparing the total proportional of positively stained cells within the TNs and the peritumoral stroma for each marker, χ2 statistical analysis demonstrated a hierarchy of expression of these markers with increasing abundance: NANOG > SOX2 > KLF4 > c-Myc > OCT4. All differences were statistically significant (p < 0.01). 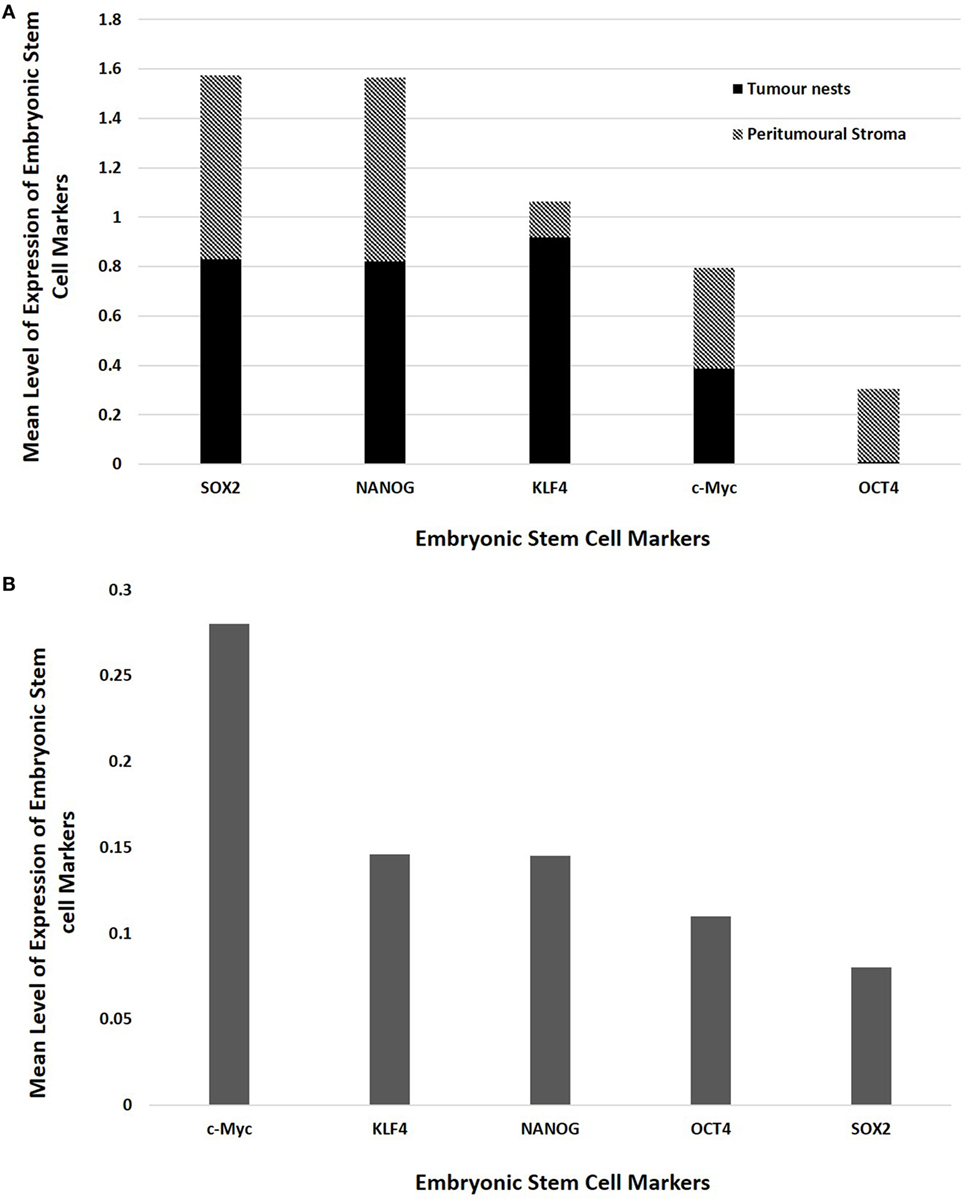 Figure 3. Bar graphs comparing mean positive expression of cells between the tumor nest and the peritumoral stromal subpopulations within colon adenocarcinoma metastasis to the liver for each embryonic stem cell (ESC) marker on 3,3-diaminobenzidine immunohistochemical staining (A) and comparing cumulative positive expression of cells in both the tumor nests and the peritumoral stroma for each ESC marker for colorimetric in situ hybridization (B).

The relative abundance of the CSC markers used in this study may reflect the presence of a hierarchy of CSCs within this tumor. 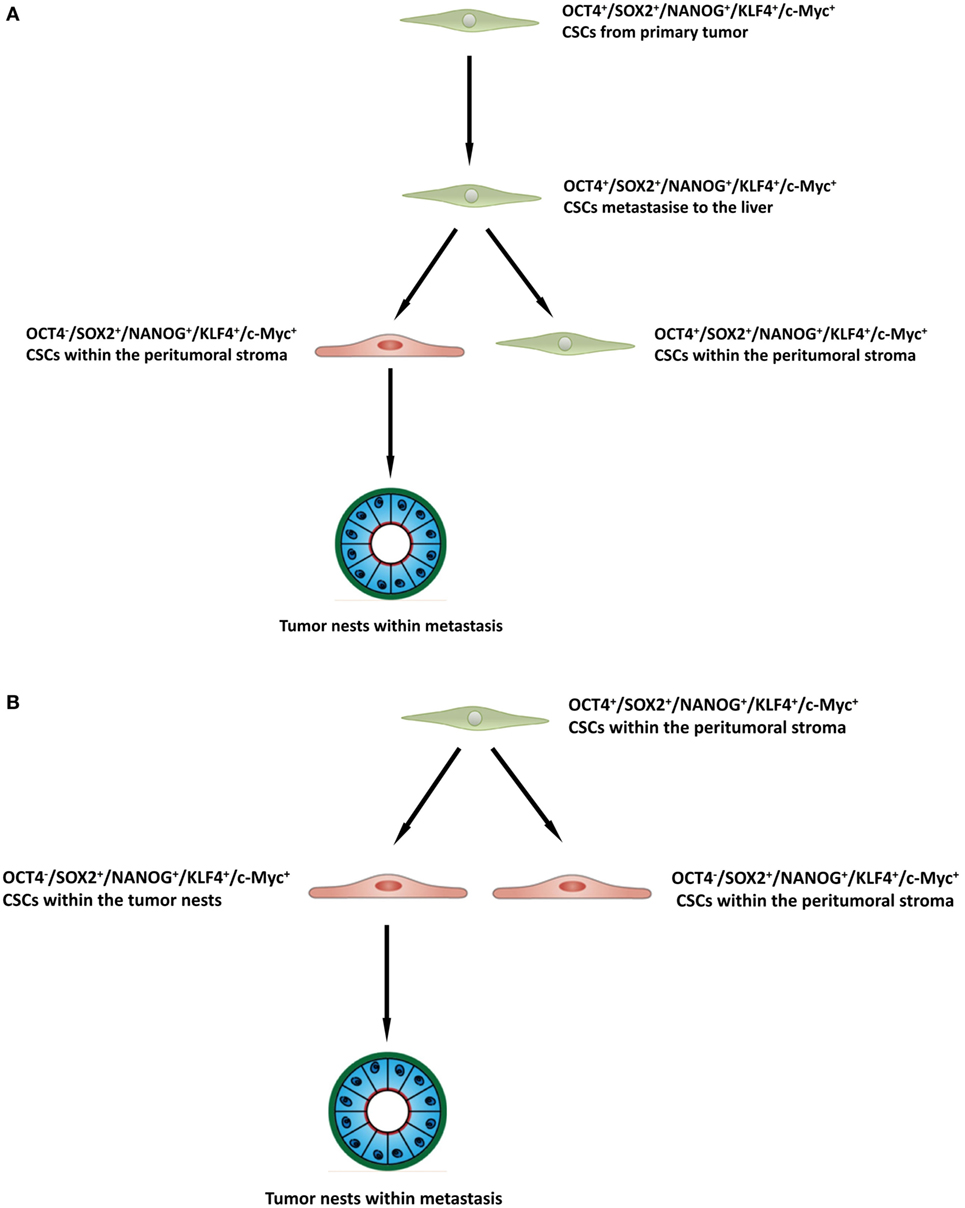 Figure 4. A schema proposing that cancer stem cells within the primary colorectal cancer undergo epithelial-mesenchymal transition and metastasize to the liver by seeding new tumors (metastases). These primitive cells can be identified by their expression of OCT4 which are present within the peritumoral stroma (A), or the lack of expression of OCT4 on the cancer stem cells within the tumor nests (B), and the downstream acquisition/loss of genes that results once the tumor has been seeded in the liver giving rise to the subpopulations seen in colorectal cancer metastasis to the liver.

Recent literature has reported on the heterogeneity of CSC (30, 31) and suggests a putative CSC hierarchy and the upregulation of OCT4 as potentially identifying the most primitive phenotype in the CSC population (32, 33).

It would be of great interest to carry out analysis of tissue samples of the primary CRCs that gave rise the liver metastases that we have studied, to determine the CSC phenotype. Unfortunately, this was not available from the cohort of patients included in this study, but will a subject of future investigation.

Epithelial–mesenchymal transition (EMT) is a pathway in which epithelial tumor cells deregulate the cytoskeletal structure to acquire mesenchymal morphology, with pathological implications in cancer metastasis and tumor invasion of the surrounding tissues (34, 35). The WNT/β catenin signaling pathway is activated in CRC, with growing evidence that this pathway interacts with the transcription and expression of embryonic transcription factors to modulate EMT (34, 35). The mesenchymal-epithelial transition (MET) pathway facilitates metastasis of tumor cells, which once integrated into a host tissue, their mesenchymal morphology transformed into epithelial phenotype (34, 35). Again, WNT/β catenin pathway is implicated in this morphological change, as inhibition of this pathway blocks MET (3, 4, 35).

It is exciting to speculate the presence of an OCT4+ CSC subpopulation within a primary CRC that undergoes an EMT process (36). The EMT process proposes that the epithelial CRC CSC acquire a mesenchymal phenotype which enables it to detach and metastasize to the liver via the portal circulation, in a similar way that circulating cancer cells are proposed to originate (37, 38). We speculate that these OCT4+ CSCs, upon “lodgement” in the liver then subsequently undergo MET (39), OCT4− CSC subpopulation within the peritumoral stroma to complete the metastatic process. This latter CSC subpopulation then potentially gives rise to the OCT4− CSCs within the TNs (Figure 4B). Alternatively, the “parent” metastatic OCT4+ CSCs may be seeded into the liver to form the TNs, which then gives rise to a gradual succession of primitive progenies (Figure 4B) with the OCT4+ being the ultimate end-product of this process. However, it is equally likely that the OCT4+ cells are not derived from the CRCLM, but instead are from the surrounding tissues and this clearly requires further investigation.

Recent studies have demonstrated a role for granulocyte macrophage colony-stimulating factor in inducing EMT in CRC, primarily being secreted by the colon epithelial cells (40, 41). Based on this study, it is exciting to speculate that the OCT4+ cells are a result of the process of EMT, although this is the topic of further investigation.

The finding of three putative subpopulations of CSC within CALM provides novel insight and warrants further investigation toward a better understanding of the biology of this common cancer.

This study was carried out with the approval of the Central Health and Disability Ethics Committee (ref. no. 13/CEN/106) with written informed consent from all subjects in accordance with the Declaration of Helsinki.

The authors declare that the research was conducted in the absence of any commercial or financial relationships that could be construed as a potential conflict of interest. ST and TI are inventors of the PCT patent application for Cancer Diagnosis and Therapy (no. PCT/NZ2015/050108), and the PCT patent application for Cancer Therapeutic (US62/452479).

We thank Ms. Liz Jones and Ms. Alice Chibnall of the Gillies McIndoe Research Institute for their assistance in IHC and CISH staining, and for performing tissue processing for NanoString analysis, respectively. HH was supported by a summer scholarship from the Deane Endowment Trust. This work is supported by the Lloyd Morrison Colon Cancer Research Programme. Aspects of this work were presented at the 10th International Conference on Cancer Stem Cells and Oncology Research, 26th-28th June 2017, London, UK.

The Supplementary Material for this article can be found online at http://www.frontiersin.org/articles/10.3389/fsurg.2017.00076/full#supplementary-material.

Copyright: © 2018 Humphries, Wickremesekera, Marsh, Brasch, Mehrotra, Tan and Itinteang. This is an open-access article distributed under the terms of the Creative Commons Attribution License (CC BY). The use, distribution or reproduction in other forums is permitted, provided the original author(s) or licensor are credited and that the original publication in this journal is cited, in accordance with accepted academic practice. No use, distribution or reproduction is permitted which does not comply with these terms.