Methods: Sexually active men, 30–60 years old, recorded in the Swedish Hernia Register for a primary inguinal hernia TEP operation were included. Two initial questions of the SexIHQ identify patients with pain at sexual activity. Only these patients proceeded to answer the specific questions on pain-induced impairment of sexual activity, pain frequency and intensity, physical functions (erection and ejaculation), and symptoms of depression. SexIHQ, the Short Form-36 (SF-36), the Inguinal Pain Questionnaire (IPQ) were mailed to participants for long term follow up.

Two large Danish register-based studies have reported on postoperative complaints. The first assessed 700 patients, of which 72% had been operated on with a Lichtenstein repair. Pain during sexual activity was found in 22%; 6.7% being moderate–severe. A total of 12% had ejaculatory pain (1). The second study reported on 805 TAPP-operated patients where 11% reported pain during sexual activity; 2.4% being moderate–severe pain (7).

Several questionnaires have been developed that specifically address impairment of sexual function. Most are extensive, which may limit the response rate. One example is the validated International Index of Erectile Dysfunction (IIEF) (8). It was used in 40 Lichtenstein-operated patients before and 3 months after surgery, without detected difference (9). The Male Sexual Health Questionnaire (MSHQ) focuses specifically on erectile and ejaculatory dysfunction, as well as intercourse satisfaction (8, 10). These questionnaires do not address the influence of the hernia or sequelae of the operation on sexual dysfunction. A less extensive questionnaire, specifically investigating pain and sexual dysfunction in hernia patients, was developed in Denmark (1). It includes questions on frequency, localization, intensity, pain descriptors, sexual dysfunction due to pain, and pain elsewhere in the body. Although less extensive, this questionnaire would be hard to implement in routine use in large cohorts of patients, as in national registers.

Men aged 30 to 60 operated on for a primary inguinal hernia by TEP between January 2005 and May 2009 were included (Figure 1). Prospective data from Swedish Hernia Register (SHR) (11) was collected and patients were asked to answer the Sexual Inguinal Hernia Questionnaire (SexIHQ) on pain during sexual activity, the Inguinal Pain Questionnaire IPQ, and the Short Form-36 (SF-36). Inclusions and exclusions are reported in Figure 1. Deceased patients were identified by the Cause of Death Register of the Swedish National Board of Health and Welfare. Patients with previous operations in the abdomen, chronic back or hip pain, or a recurrent hernia were excluded. These are conditions that might have an influence on pain and sexual function that cannot reliably be separated from pain originating from the operated groin. The SHR was searched a second time to identify a recurrent hernia operation during the study period, which was a criterion for exclusion. Questionnaires were mailed in January 2010, followed by one reminder in May, resulting in a minimum follow up of six months. 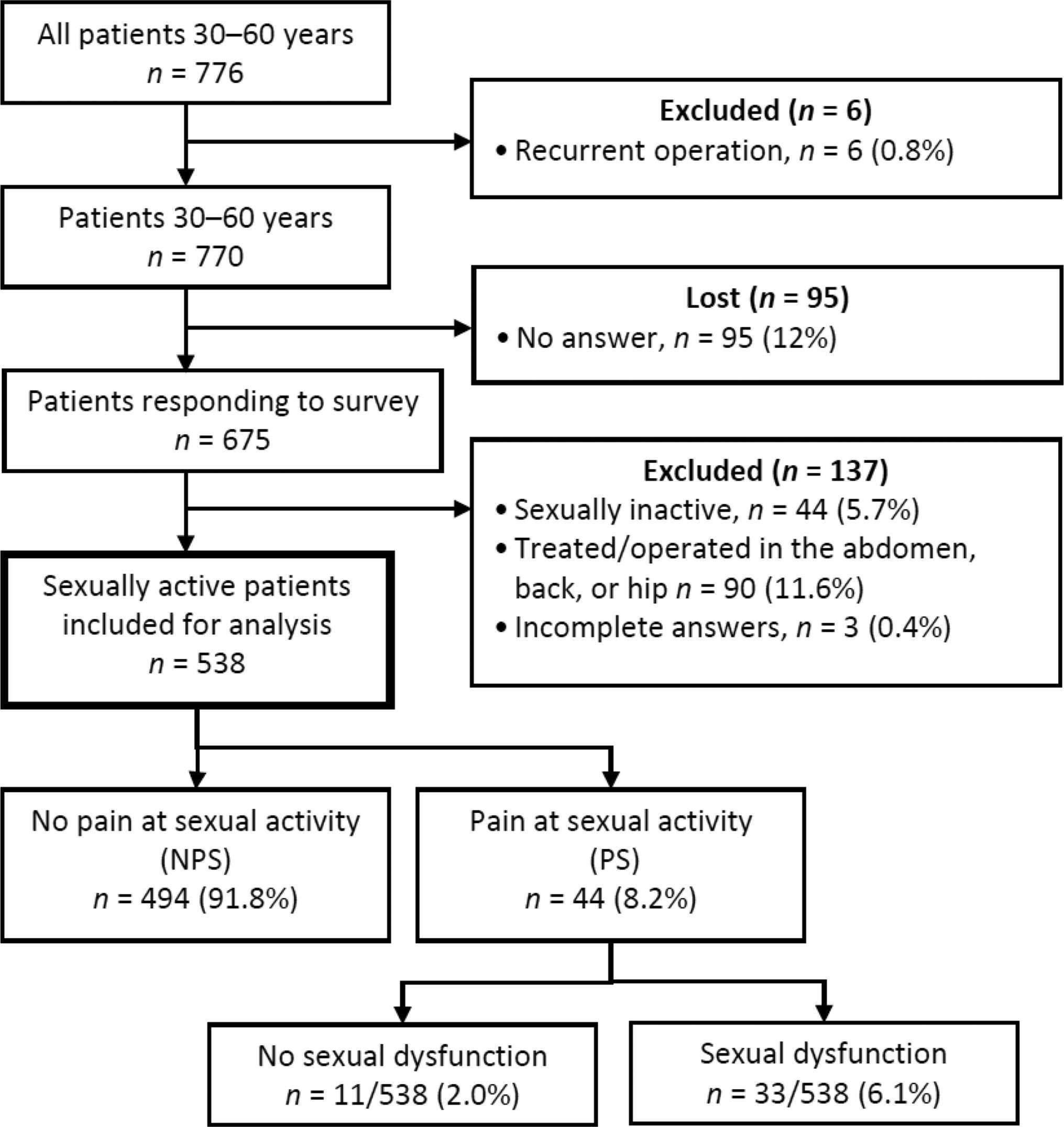 The trial was approved by the Regional Ethics Review Board at Lund University (634/2008) and registered at www.ClinicalTrials.gov (ID: NCT02419950). A written consent was signed by all participating patients in accordance with the Declaration of Helsinki.

Questionnaire on Pain During Sexual Activity 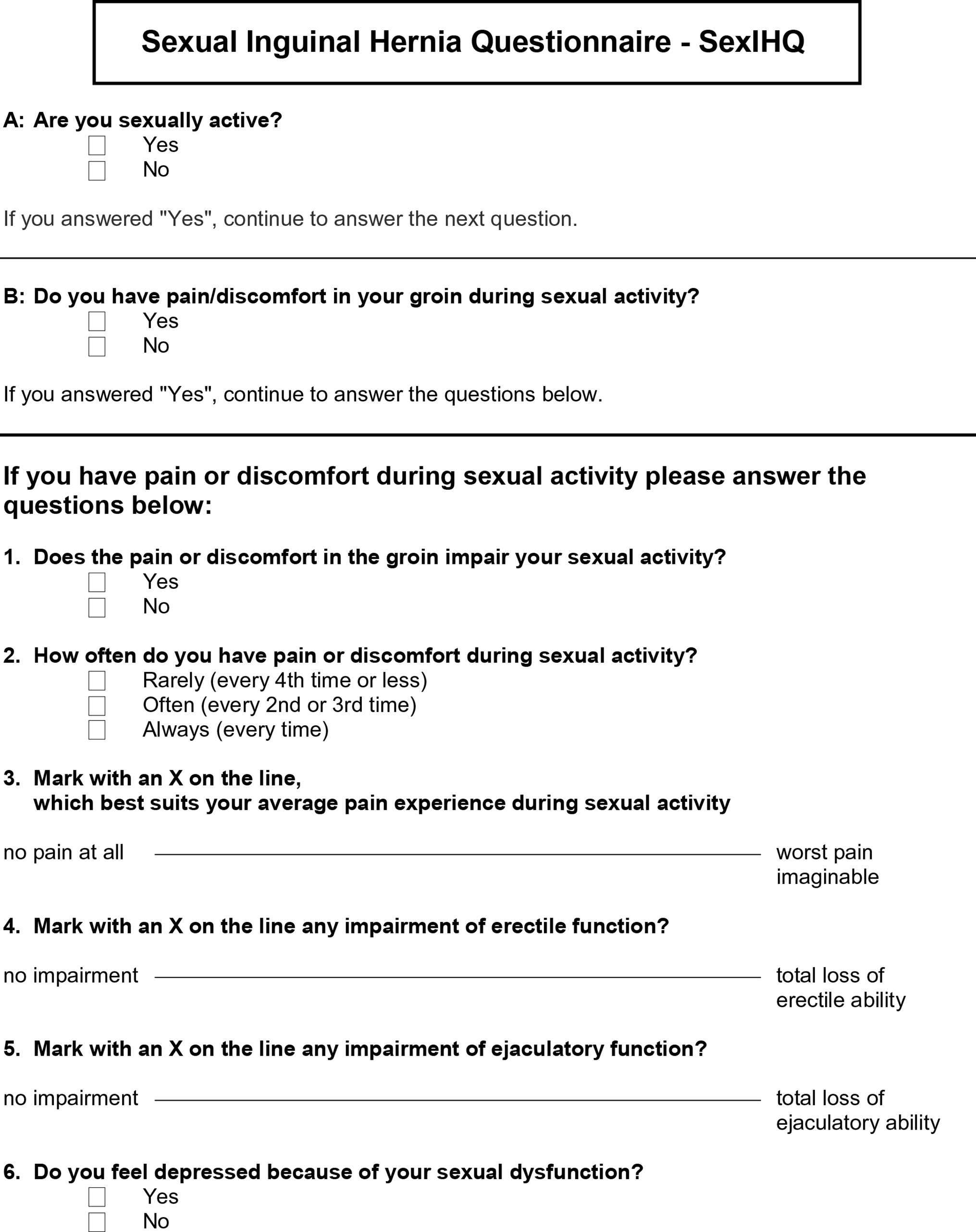 The SHR is a validated voluntary nationwide prospective register that covers more than 95% of all groin hernia repairs performed in Sweden. Patients enter the register at their primary operation. Complications occurring within 30 days are reported. A recurrent operation is recorded as a new entry. All inhabitants in Sweden have a unique personal identity number, which enables follow-up of patients having subsequent hernia surgery performed anywhere in Sweden. External review of data in the SHR is conducted annually.

IPQ is a validated questionnaire and includes 19 questions regarding different pain modalities (11, 13). Questions 2, 11, 12, 14, 16, and 19 were regarded as relevant for this study. Question 2 Pain past week was graded on a 7-level scale from No pain to Pain that could not be ignored; prompt medical advice sought. The definition of pain was grades 3–7; pain that could not be ignored, but did not interfere with every day activities and worse. Grade 1–2; No pain and Pain present that could easily be ignored was defined as no pain.

The SF-36 for measurement of health-related quality-of-life (HRQL), licensed by the HRQL-group (www.hrql.se) at Gothenburg University, was used. The subscales and composite scores (physical and mental) were calculated according to the SF-36 manual (14). Norm-based scores were calculated using the Swedish age- and gender-specific means and standard deviations. The norm data have a mean of 50 and a SD of 10. A 5-point difference corresponds to an effect size of 0.5 SD and can be regarded as a medium size clinically important difference (15).

The IBM SPSS Statistics Software version 22 was used for all statistical analyses. Continuous variables were analyzed using the Student t-test, and categorical variables with Pearson χ2 test or Fisher’s exact test. A p-value of less than 0.05 was regarded as significant. Risk factors were selected prior to analysis and entered simultaneously, while odds ratios (OR) were evaluated using binary logistic regression.

Operative and postoperative data are shown in Table 2. There were no differences between the NPS and PS groups regarding mesh-weight, fixation, uni- or bilateral operation, intraoperative complications, operation time, and hospital stay. Heavy-weight meshes were used in 66% of patients without difference between the NPS and the PS groups (p < 0.364). Immediate severe postoperative pain was seen in 0.6% (3 patients), all in the NPS group. Postoperative complications were reported in a total of 6.5%. Within the NPS 6% reported any complication, and in in the PS group 18% (p < 0.005). Postoperative infection was reported in 0.6% (3 patients), all in the NPS group. No reoperation within 30 days was reported. 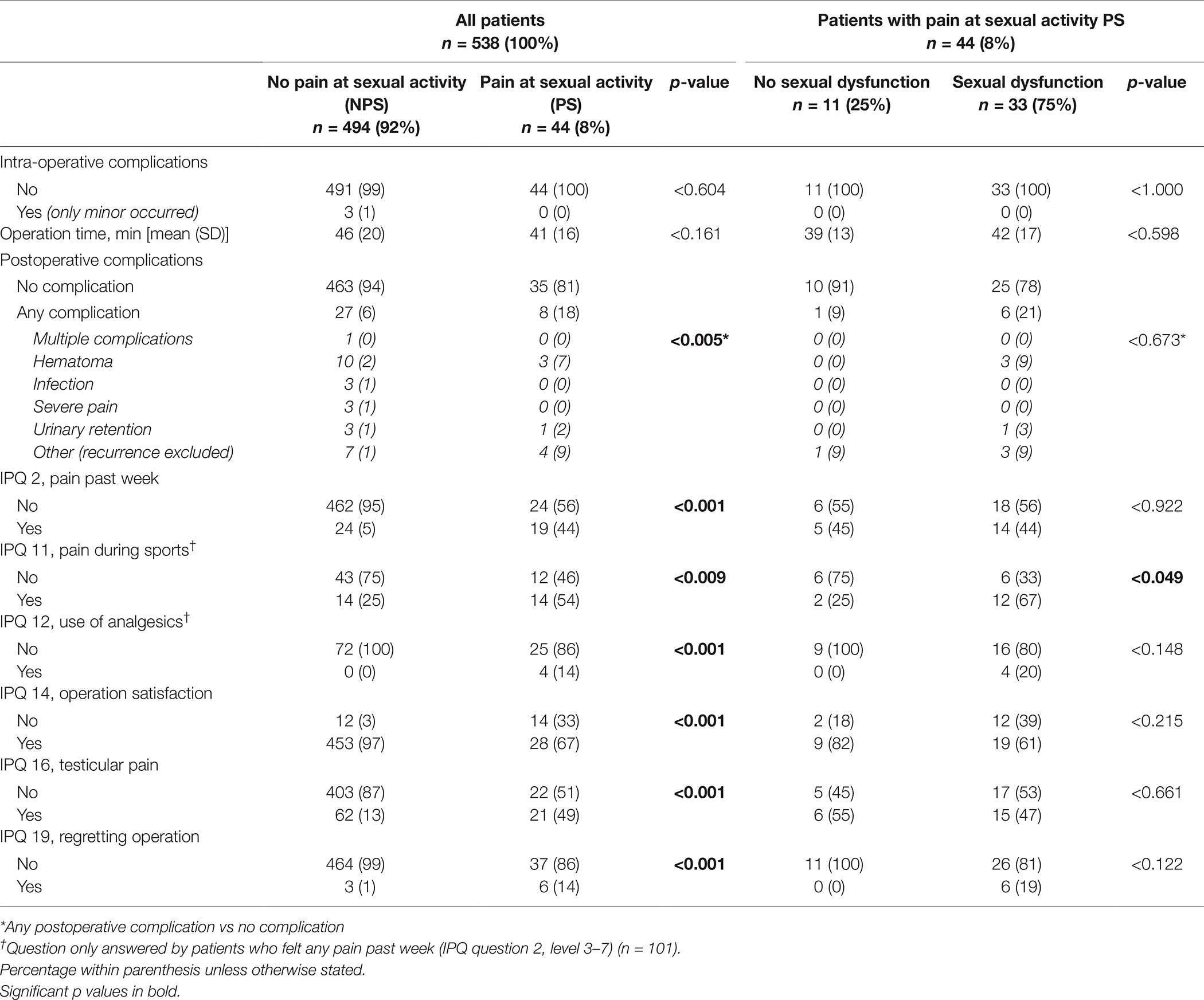 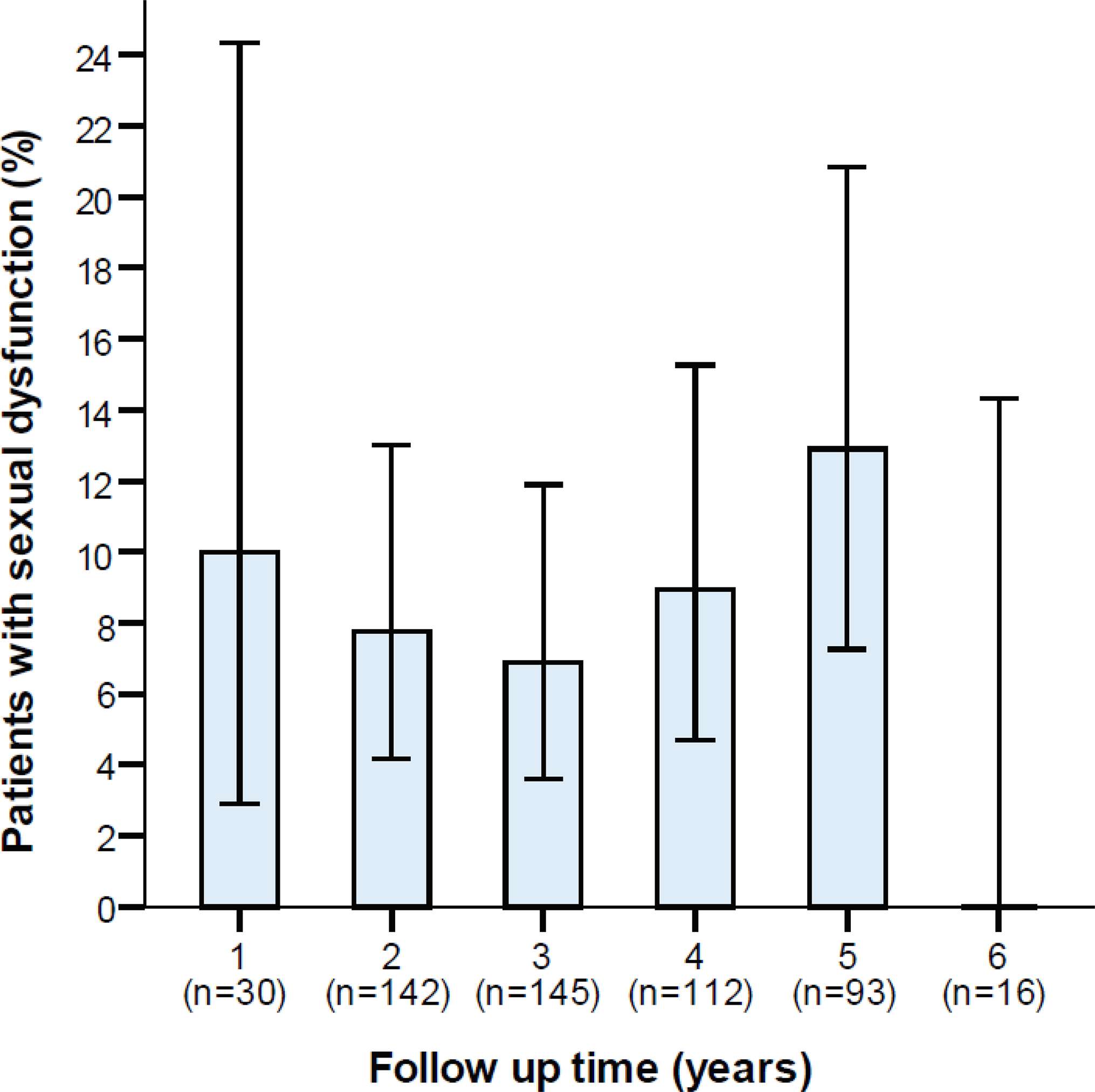 Figure 3. Proportion of patients with sexual dysfunction due to pain in relation to the length of follow-up. Error bars represents 95% confidence intervals. 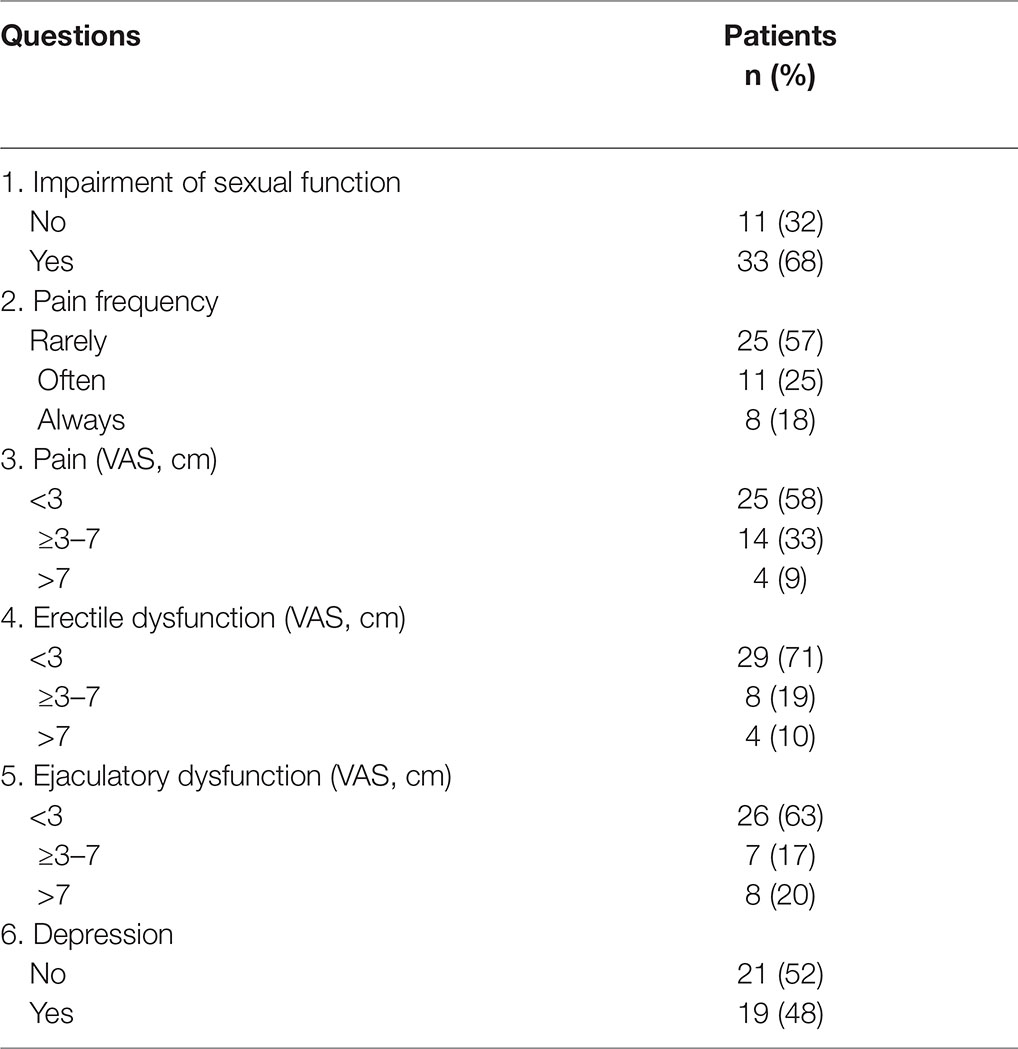 All subscales for SF-36 were slightly above the norm in NPS patients, Figure 4. In PS patients, all SF-36 scales were significantly lower compared to the norm, except for Physical Function (PF), Role Physical (RP), and Role Emotional (RE). 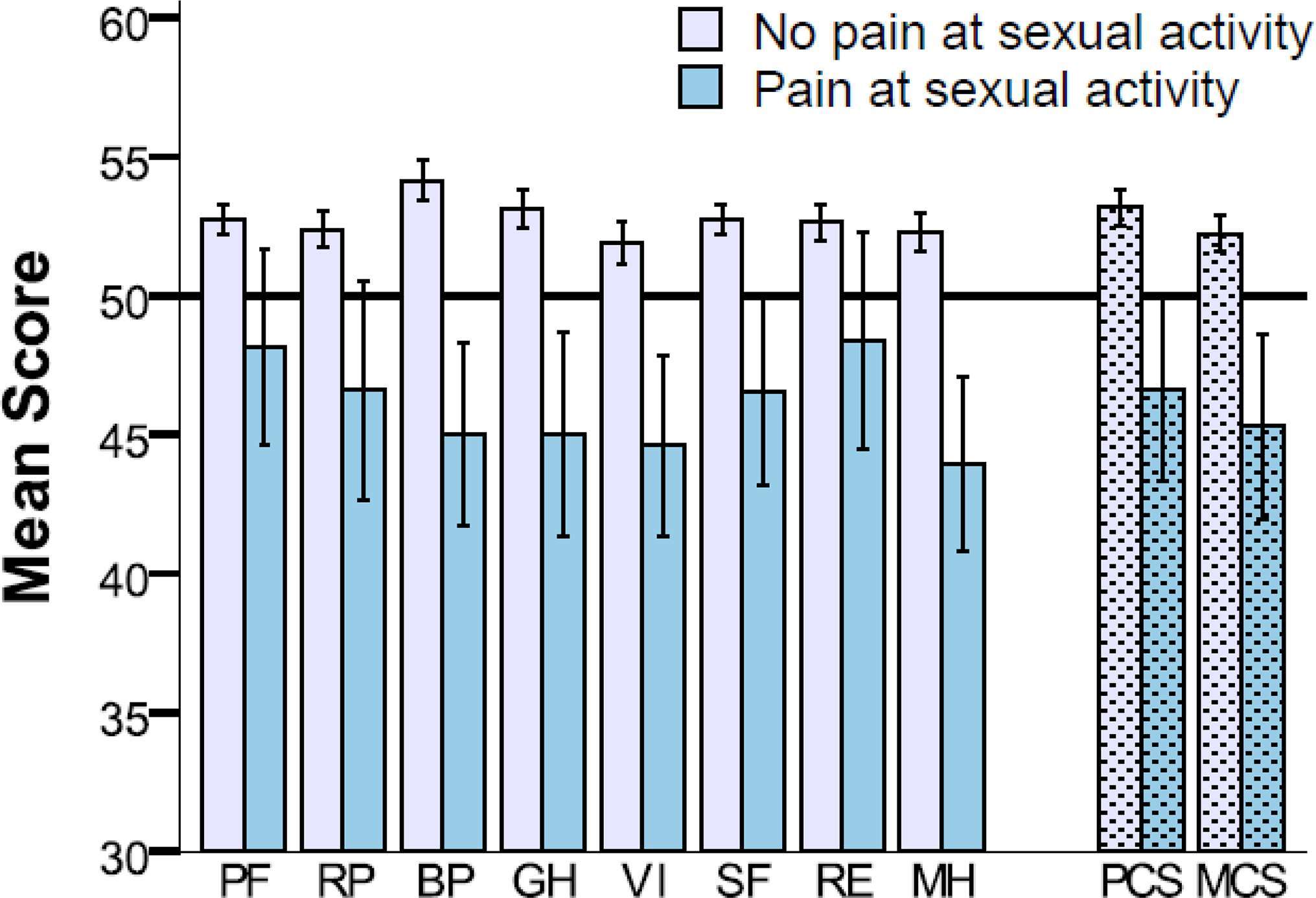 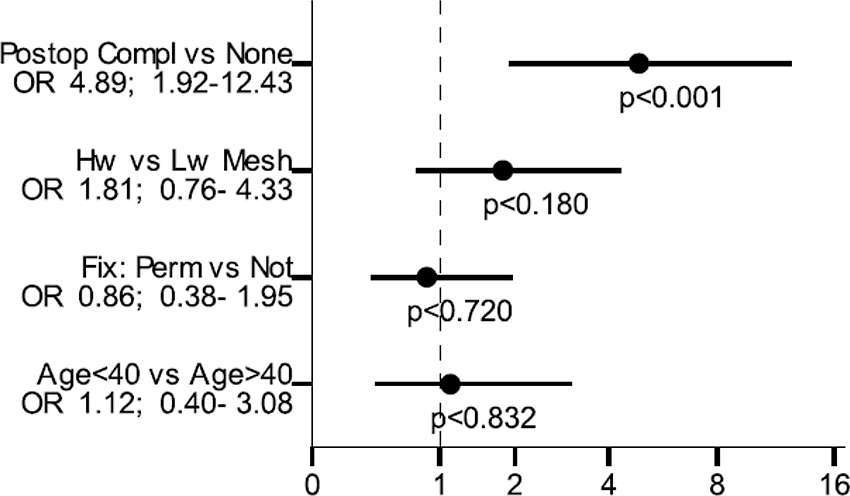 This study is based on the Swedish National Hernia Register, introducing the SexIHQ questionnaire specifically addressing impairment of sexual function related to pain after inguinal hernia repair with TEP. Long-term sexual impairment after groin hernia operation was present in one out of twelve patients and did not seem to attenuate over time. Quality-of-life was considerably reduced in afflicted patients.

A relatively short questionnaire, specifically investigating genital pain and sexual dysfunction in hernia patients was developed by Aasvang et al. (1). This protocol was further developed and used in a more detailed protocol (7). We enhanced these ideas with the purpose of making a more specific questionnaire, the SexIHQ, which only assesses impairment of sexual function caused by pain after surgical repair. The debilitating effect of pain on both erectile and ejaculatory function, as well as psychological problems (e.g., depression), seemed relevant to include as a dimension in the quality-of-life concept. This is supported by the decreased dimensions of SF-36 in both physical and mental domains. To assess sexual dysfunction, visual analogue scales and tick-boxes were used in this 8-question 1-page questionnaire, which was created for implementation in large cohort studies (e.g., register-based). The goal was to approach only patients having sexual impairment after hernia repair. For this reason, the questionnaire starts with two questions discriminating sexually active from sexually inactive patients, defining sexually active patients as having pain during sexual activity versus those without. This method limits the number of patients needed to be addressed with more specific questions on sexual issues, hopefully increasing the response rate in large cohorts.

A limitation of this study is the lack of preoperative data. These data are not available in most register-based studies today. Even if all questions focus on the relation between “pain in the groin” and sexual function, it could still be difficult for the patient to differentiate between postoperative groin pain and other conditions as a cause for the impairment of sexual function. In a recently published RCT (Lichtenstein versus the Onstep technique), 28% of patients reported pain during sexual activity preoperatively, but reduced to 11% postoperatively (5). In another study on TAPP, the corresponding values were 23 and 10% (4). Our results, in a national cohort of patients operated on by several different surgeons at different educational levels, experienced 8.2% of pain during sexual activity. Among these patients 6.1% (33/44) reported sexual dysfunction; this indicates that the TEP repair may be a competitive technique in this perspective.

Including patients from a national register has its advantages. All levels of experience and varying techniques used by operating surgeons are included, resulting in high external validity. Three studies on this subject were published from the Danish national hernia register (1, 4, 7).

A register-based questionnaire study of 1,172 patients operated on by TAPP during a 10 year period had a response rate of 68% (7). We achieved a response rate of 86% in patients operated on during a 5 year period, which is regarded as excellent. One explanation might be that our questionnaire was limited to very few questions, whereas only pain-afflicted patients (8%) were requested to answer them.

The trial was approved by the Regional Ethics Review Board at Lund University (634/2008) and registered at www.ClinicalTrials.gov (ID: NCT02419950). A written consent was signed by all participating patients in accordance with the Declaration of Helsinki.

Copyright © 2018 Gutlic, Rogmark, Petersson and Montgomery. This is an open-access article distributed under the terms of the Creative Commons Attribution License (CC BY). The use, distribution or reproduction in other forums is permitted, provided the original author(s) and the copyright owner are credited and that the original publication in this journal is cited, in accordance with accepted academic practice. No use, distribution or reproduction is permitted which does not comply with these terms.