Conclusions: MD is a systemic disease with bilateral involvement of inner ears. V-EH is a major pathophysiology of vestibular Meniere's disease, which would precede c-EH in the development of vestibular Meniere's disease, a milder subtype of MD. MRI is useful for differentiating MD from other vertigo attacks caused by different pathologies in bringing EH into evidence.

The studies involving human participants were reviewed and approved by the Institutional Review Board of Niigata University Hospital (No. 2015-2440).

Demographic and clinical data, including age, sex, period from disease onset to consultation, frequency of vertigo spells, and duration of vertigo attack, were obtained from the patients' medical records.

All the patients underwent inner ear imaging studies using a 3-T MR unit after receiving intravenous contrast injections as described by Naganawa et al. (9). Briefly, MRI measurements were performed 4 h after intravenous administration of a single dose (0.2 ml/kg or 0.1 mmol/kg of body weight) of gadolinium-diethylenetriaminepentaacetic acid dimethylamide (Gadovist, Bayer Healthcare, Leverkusen, Germany) using a 3-T MR unit (MAGNETOM Prisma; Siemens, Erlangen, Germany) with a 64-channel array head coil. Heavily T2-weighted MR cisternography was obtained as the anatomical reference of the total lymph fluid, and heavily T2-weighted(hT2W)-3D-FLAIR with inversion time (TI) of 2,250 ms (PPI) and hT2W-3D-inversion recovery with TI of 2,050 ms (PEI) were obtained as the methods proposed by Naganawa et al. (9). Two head and neck radiologists with 30 and 22 years of experience who were blinded to the clinical data independently assessed the cochlear and vestibular endolymphatic hydropses (c-EH and v-EH) as none, mild, or significant, using a grading system proposed by Nakashima et al. (10) (Figure 1). Mild or significant hydrops was defined as positive hydrops. Discrepant interpretations were resolved by discussion between the radiologists.

An alternate bithermal (26 and 45°C) air caloric test was performed. The maximum slow phase velocity of the nystagmus was measured on electronystagmography, and the canal paresis % (CP%) was calculated using the formula of Jongkees (11). A CP of >20% was considered to indicate a significant unilateral caloric weakness.

A |AR| of >33.3% was defined as a unilateral saccular (cVEMP) or utricular (oVEMP) dysfunction.

The subject was asked to stand upright with the feet close together in the centers of circles with radii of 0.5 and 1 m that were drawn on the floor. The subject was then blindfolded and instructed to stretch both arms straight forward and to step in place at a normal walking speed (~110 steps/min) for a total of 100 steps. The abnormality threshold was set as a rotational deviation >45°.

The rotatory chair test was performed using Nistamo21 IRN 2 (Morita, Japan). The patients sat in a rotatory chair to which a pendulum-like rotation was applied so that the maximum head angular velocity was 50°/s at a stimulation frequency of 0.1 Hz. The angular velocity of eye movements was monitored and analyzed. The vestibulo-ocular reflex directional preponderance (VOR-DP) was calculated, and a VOR-DP of >12% was considered a significant DP.

The Dizziness Handicap Inventory (DHI) is a standard questionnaire that quantitatively evaluates the degree of handicap in the daily life of patients with vestibular disorders; it consists of 25 questions (12, 13). The total score ranges from 0 (no disability) to 100 (severe disability). 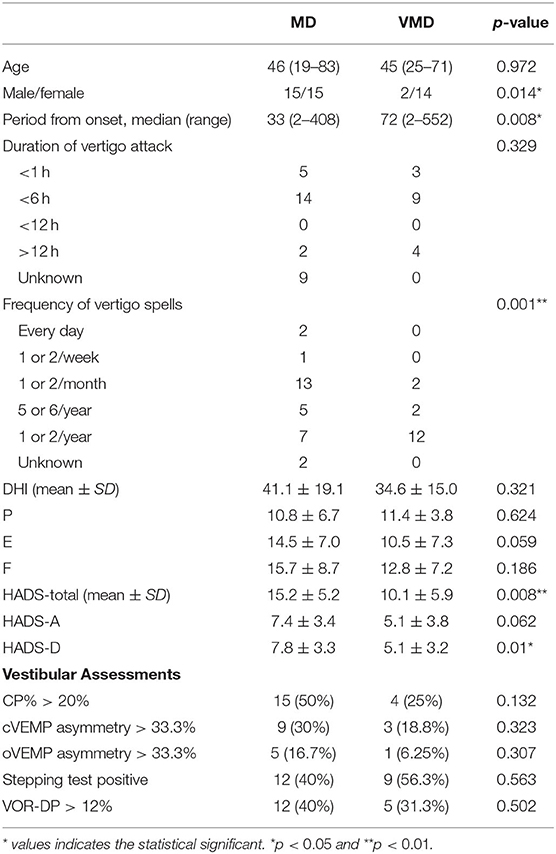 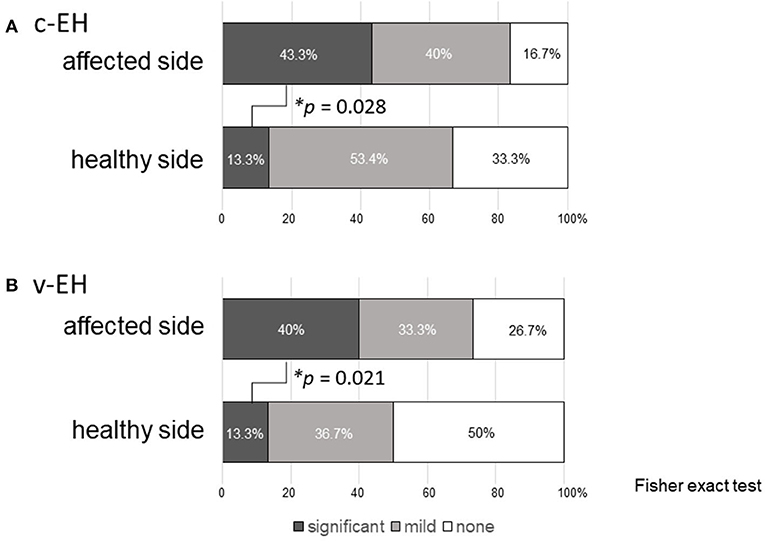 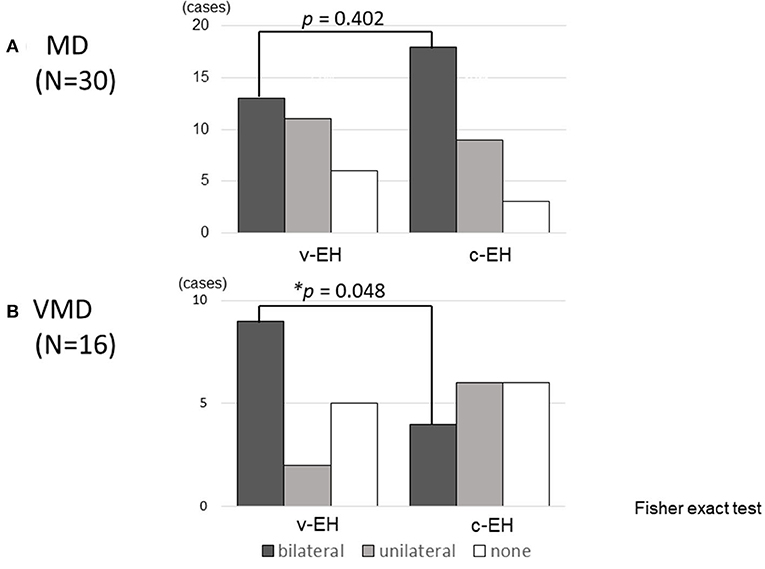 The studies involving human participants were reviewed and approved by the institutional review board of Niigata University Hospital (No. 2015-2440). The patients/participants provided their written informed consent to participate in this study.

This work was partly supported by Grants-in-Aid from the Ministry of Education, Culture, Sports, Science and Technology of Japan (18K09371) and Japan Agency for Medical Research and Development (18059460).

1. Alford BR. Committee on hearing and equilibrium, report on subcommittee on equilibrium and its measurement, Meniere's disease: criteria for diagnosis and evaluation of therapy for reporting. Trans Am Acad Ophthalmol Otolaryngol. (1972) 76:1462–4.

Copyright © 2020 Morita, Takahashi, Ohshima, Yagi, Kitazawa, Yamagishi, Izumi and Horii. This is an open-access article distributed under the terms of the Creative Commons Attribution License (CC BY). The use, distribution or reproduction in other forums is permitted, provided the original author(s) and the copyright owner(s) are credited and that the original publication in this journal is cited, in accordance with accepted academic practice. No use, distribution or reproduction is permitted which does not comply with these terms.