Artificial photonic materials displaying ordered reflected color patterns are desirable in the field of photonic technologies, however, it is challenging to realize. Here we present that self-assembly of cellulose nanocrystals (CNC) in a tilted cuvette leads to the formation of rainbow color CNC films. We show that the self-organized CNC films enable simultaneous reflection of left-handed circularly polarized (LCP) and right-handed circularly polarized (RCP) light with lateral gradient transmittance ratio (LCP/RCP: 8.7–0.9) and the maximum reflectance value up to ca. 72%. This unique ambidextrous optical reflection arises from left-handed chiral photonic architectures with lateral gradient photonic bandgaps and nematic-like defects at the film-substrate interface and between left-handed photonic bandgap layers acting as a half-wavelength retarder. We demonstrate that the tilted angle self-assembly method provides a feasible step toward color patterning of CNC-based photonic films capable of ambidextrous optical reflection.

Here we report that self-assembly of CNC in a titled cuvette of stable colloidal dispersions produces chiral photonic CNC films that display rainbow colors and lateral gradient ambidextrous optical reflection. The CNC film features a photonic architecture formed with left-handed PBG layers and nematic-like layers at the film-substrate interface and embedded between PBG layers. It enables ambidextrous optical reflection showing lateral gradient transmittance values from the higher to the lower end of the cuvette. The ambidextrous chiroptical properties are owing to the half-wavelength retardation of nematic-like phases nucleated in situ and kinetically arrested. The transmittance values of the RCP light and LCP light are tilt angle-dependent, which appear most pronounced at 30°. Increasing the tilt angle weakens chiral nematic features and promotes unidirectional alignment of CNC. We demonstrate that tilted-angle self-assembly allows synergistic self-assembly and kinetic stabilization, providing a step toward self-organized chiral nematic-nematic films capable of color patterning, lateral gradient PBG and ambidextrous optical reflectivity.

CNC was obtained from cotton pulp by acid hydrolysis using sulfuric acid (64%) and the acid/cotton pulp mass ratio was kept at 10:1. The hydrolysis reaction took place at 45°C for 90 min under vigorous stirring, and the reaction was terminated using deionized water. The solid product was centrifuged (8,000 r/min, 6 min) several times and dialyzed against deionized water until pH = 7. The suspension was diluted to desired concentrations for keeping.

Two milliliter of CNC suspensions (4 wt%, pH = 7) without macroscopic phase separation was allowed to assemble in a tilted quartz cuvette (25°C) as illustrated in Figure 1. Changing the tilt angle (α) of the cuvette to base plane led to a range of iridescent rainbow color CNC films, denoted as CNC-α. 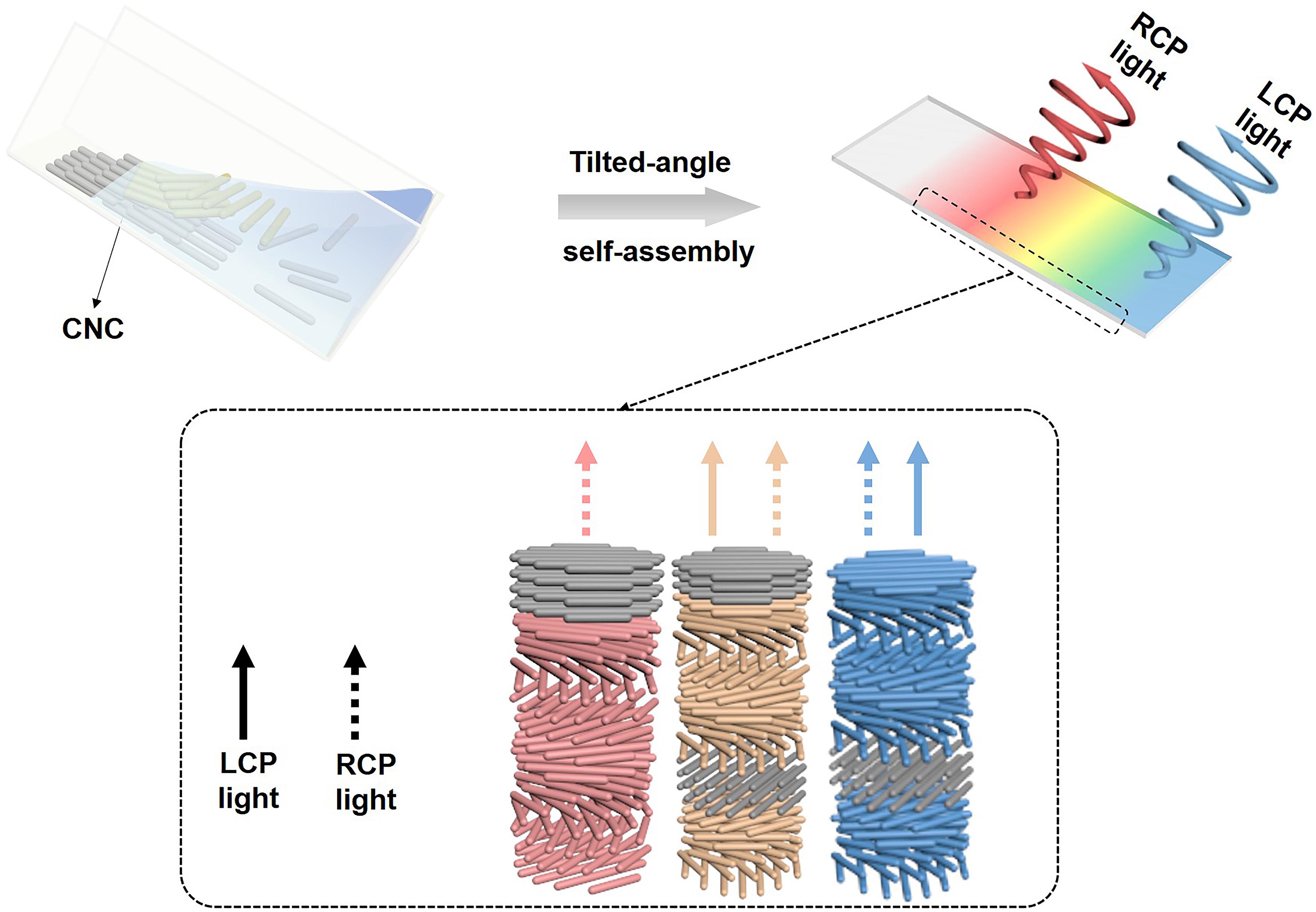 CNC-30 film showed colors in order of red, orange, green and blue from the higher to the lower end of the cuvette against a black background when viewed in normal white light (Figure 2A). Notably, the portion of the film at the air-substrate interface at the higher end was colorless. The film colors dimmed when viewed through a 400–700 nm left-handed circular polarization (LCP) filter and intensified when viewed through a 400–700 nm right-handed circular polarization (RCP) filter (Figures 2B,C). It indicates that CNC-30 reflects simultaneously LCP and RCP light. 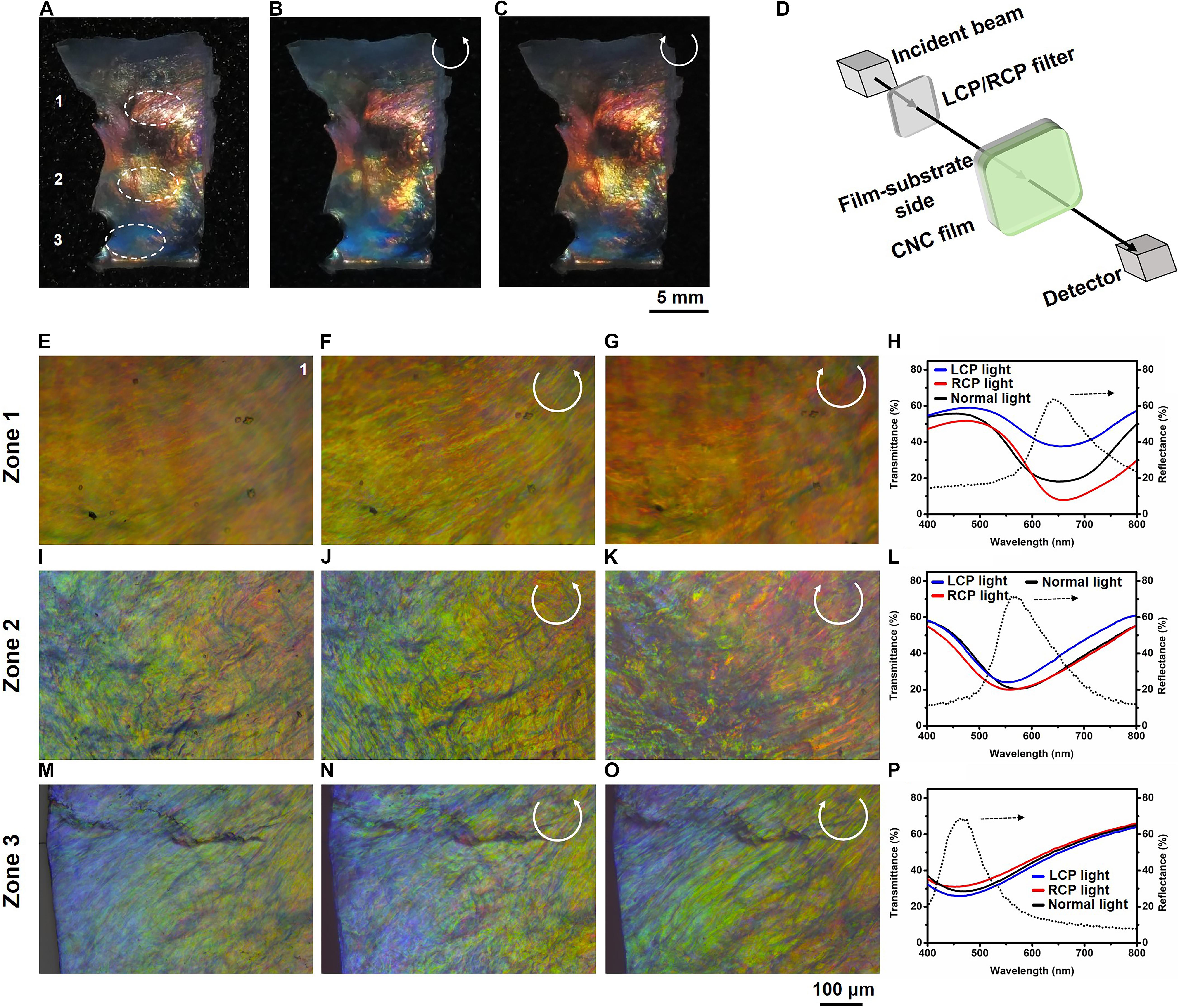 We investigated the mesostructural features of the zones 1, 2, and 3 using scanning electron microscopy (SEM). High-magnification SEM images of the film cross-section revealed a chiral nematic-nematic bilayer architecture (Figures 3A–C), where the layer at the air-film interface contained primarily chiral nematic order with the helical pitches of P1 = 202 nm, P2 = 170 nm, and P3 = 142 nm (Figures 3D–F). The chiral nematic order was confirmed to be left-handed based on the Neville convention, while right-handed helicoids were not found (Majoinen et al., 2012). The helical pitch of the chiral nematic phase decreased from the zone 1 to the zone 3, consistent with the optical microscopy and transmission spectral studies (Figure 2). We attributed the decreasing helical pitches to the lateral increasing of local CNC concentration induced by tilt angle assembly (Dumanli et al., 2014). The layer formed at the film-substrate interface contained primarily unidirectionally aligned CNC with respective thickness of d1 = 3,938 nm, d2 = 3,521 nm and d3 = 2,971 nm. Nematic-like layers were also found between left-handed PBG layers and increased in number from the zone 1 to the zone 3, which resulted from reduction in fluidity and kinetically arrest of CNC. 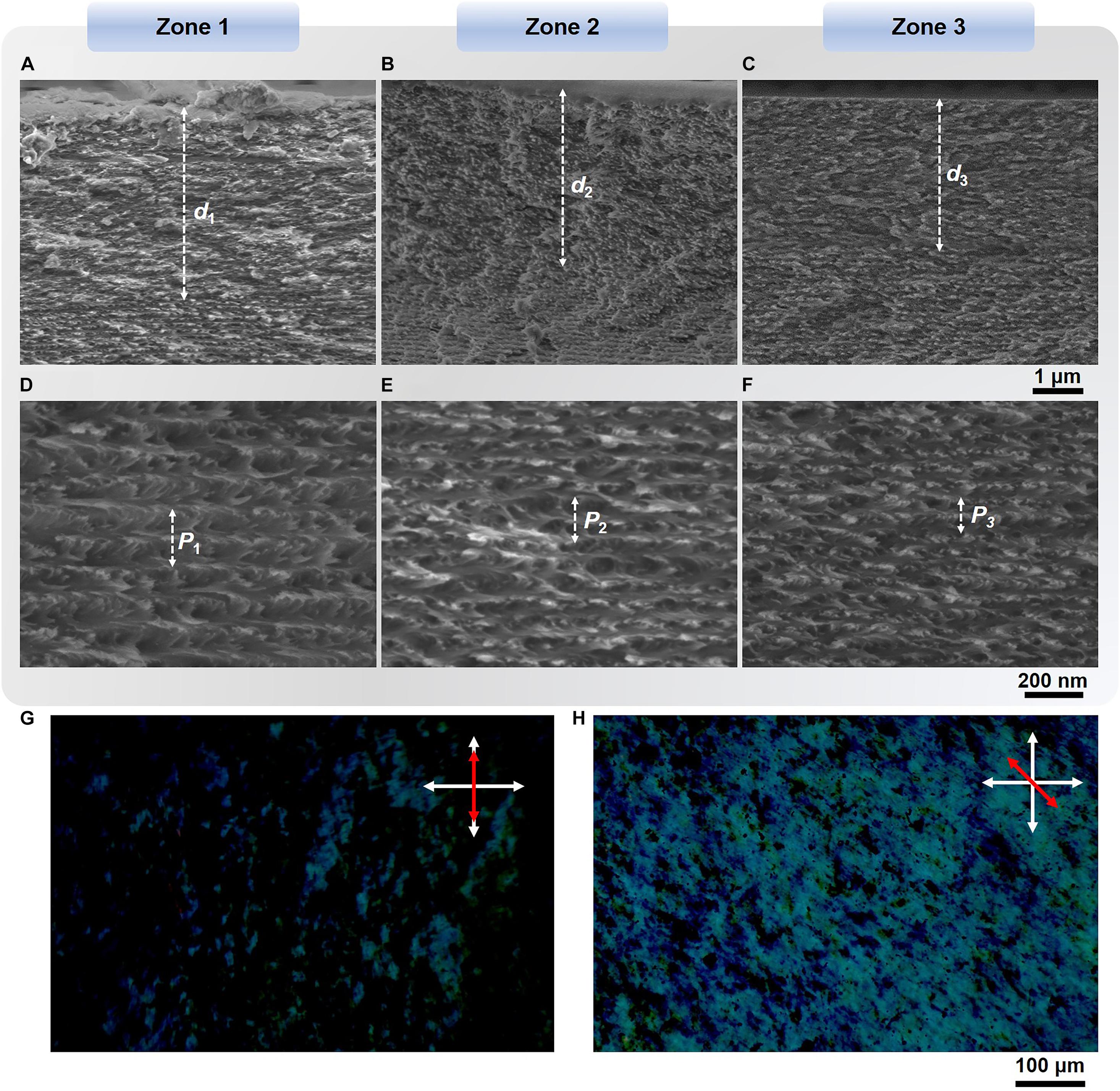 When rotated around a plane perpendicular to the crossed polarizers in a transmission polarizing optical microscopy, the zone 1 showed birefringent patterns and a change in the transmitted intensity of some color appearances from minimum to maximum at a 45° rotation, confirming the presence of nematic-like phase (Figures 3G,H). These nematic-like layers may introduce a wavelength retardation L to the propagating light following the Eq. 2,

where Δn is the net birefringence, ne and no are the extraordinary and ordinary refractive indices of birefringent medium, respectively (Cruz et al., 2018), and d is the optical path length of the nematic-like layer that can be approximated to be the layer thickness. Significantly, half-wavelength retardation causes handedness reversal of propagating circularly polarized light. Taking the zone 1 for example, given that approximately d1 = 3,938 nm and Δn = 0.08 (Krishnaiyer et al., 1968), transmitted RCP light at 630 nm would be half-wavelength retarded leading to LCP light reflection at the same wavelength. When the wavelength of the converted LCP light matches the PBG of subsequent chiral nematic layers, it is then reflected and undergoes further reversal into reflected RCP light as it propagates back through the nematic-like layer as evidenced by the transmission spectra probed by LCP or RCP light (see Figures 2G,K,O). Hence, these novel optical textures can be attributed to the synergy of left-handed chiral organizations with gradient changing helical pitches and nematic-like phases to light, the former leads to a rainbow pattern while the distribution of the latter results in the lateral gradient ambidextrous optical reflection.

We show that the rainbow color pattern and lateral gradient ambidextrous optical reflection are tilt angle-dependent. Taking CNC-60 for example, the film displayed colors in order of red, orange, yellow and blue under normal white light against a black background, and the color pattern remained literally unchanged when recorded through the LCP filter or RCP filter (Figure 4A). Selective reflection band emerged at the zone 4, next to the non-reflective region on the higher end of films, showed LCP and RCP light reflection bands with the peak transmittance values of 23 or 21% at 617 or 618 nm when probed through the LCP or RCP filter (Figure 4B). Nematic-like phase was found at the film-substrate interface as well as between left-handed PBG layers based on the SEM images (Figures 4C,D, highlighted by dotted white circles, the region above dotted white line). Notably, CNC-60 displayed larger non-reflective region at the cuvette higher end and closely matched transmittance values of the LCP and RCP light reflection compared with CNC-30. In other words, the transmittance ratio of LCP and RCP of CNC-60 was always close to 1.0, while for film CNC-30, the LCP/RCP ratio gradient decreased from 8.7 to 0.9 (Figure 4E). 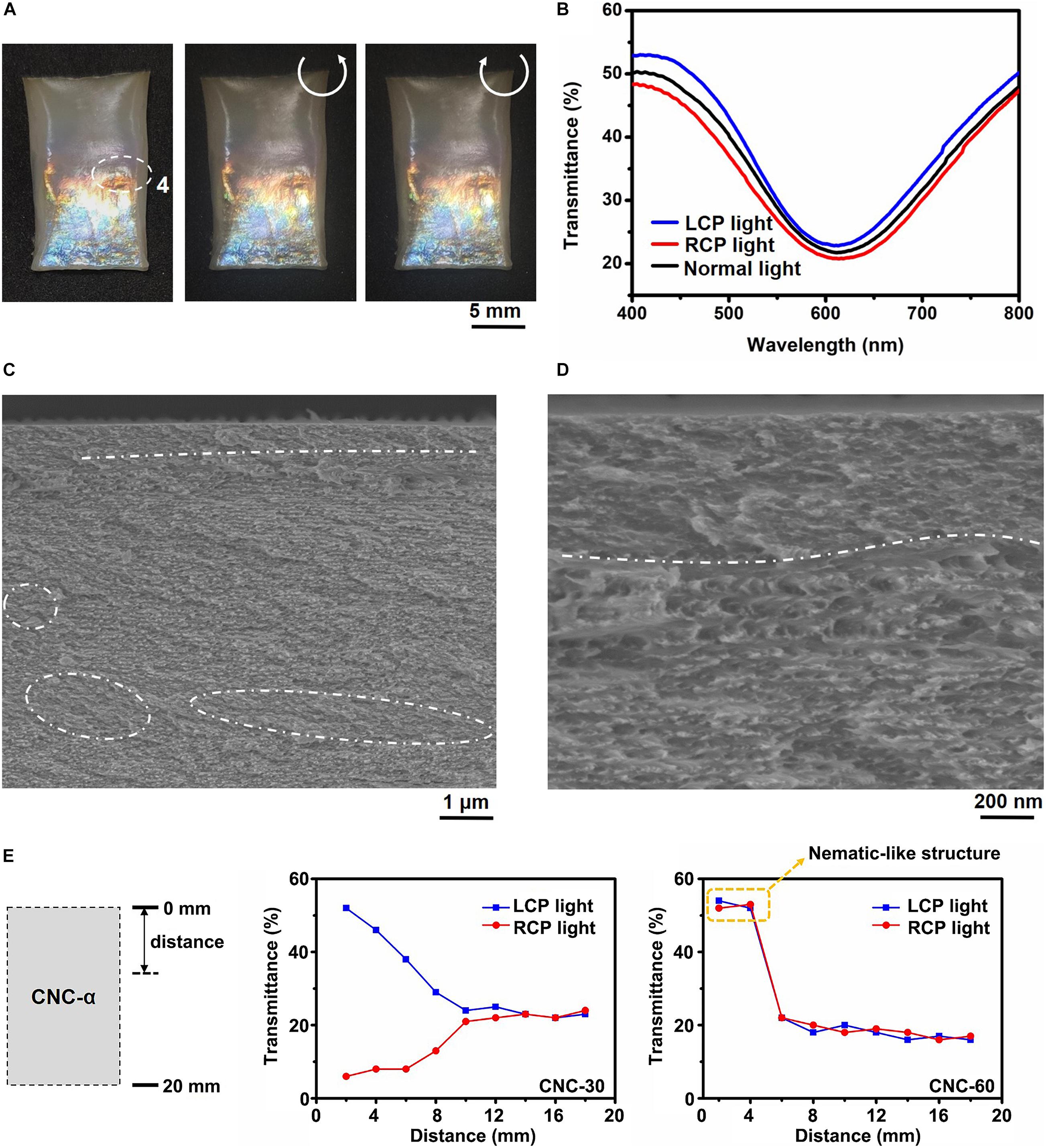 Figure 4. (A–D) Photographs of CNC-60 viewed under normal white light (left), through the LCP filter (middle) and the RCP filter (right) (A), the transmission spectra of CNC-60 probed by normal white light (solid black line), through the LCP filter (solid blue line) or the RCP filter (solid red line) (B), SEM images show a chiral nematic-nematic architecture (C), where the nematic-like layers (dotted white circles) are embedded between left-handed PBG layers and at the film-substrate interface (above dotted white lines) (C,D). (E) Changes in the transmittance value of the LCP light (blue line) and RCP light (red line) in CNC-30 and CNC-60.

In order to understand the CNC self-assembly in a tilted cuvette, two control films, CNC-0 and CNC-90, were fabricated in a CNC dispersion (4 wt%, 25°C, pH = 7) by evaporation-induced self-assembly method and by vertical deposition method (Gan et al., 2019), respectively. The CNC-0 film appeared red to the naked eyes under normal white light that intensified or dimmed when viewed through the LCP or RCP filter (Supplementary Figure 2A). One strong LCP or one weak RCP light reflection band (peak transmittance values of 27 and 82% at 644 nm) displayed on the transmission spectrum probed through the LCP or RCP filter (Supplementary Figure 2B). It indicates the presence of embedded nematic-like layer between the left-handed PBG layers, acting as a half-wavelength retarder, as evidenced by the SEM images (Supplementary Figures 2C,D). Vertical immersion of a quartz plate in a colloidal dispersion promotes unidirectional alignment leading to nematic-like CNC film, CNC-90, which is non-reflective in the visible light regime (Supplementary Figure 3). Taken together, CNC favored unidirectional nematic-like phases at the film-substrate interface along the direction of the tilt, which occupied a larger proportion when increasing the tilt angle. At the same time, the thermodynamically stable left-handed chiral nematic phases were weakened.

We have presented experimental evidences that tilt angle self-assembly produces chiral photonic CNC films displaying rainbow colors and lateral gradient ambidextrous optical reflection that can be tuned by a change in the tilt angle. We demonstrate how the circularly polarized light reflection of both handedness can be manipulated to produce chiral photonic CNC films with changing ambidextrous reflectivity and maximum reflectance values of ca. 72%. It allows lateral gradient change in assembly duration and local CNC concentrations and can be manipulated by a change in tilt angle. The formation of nematic-like phase at the film-substrate interface is owing to the combined effect of kinetic stabilization of transient phase and seeded growth. The self-organization of rainbow color CNC films in a tilted cuvette is demonstrated as a step toward synthetic construction of one-dimensional chiral photonic materials displaying optical patterning and ambidextrous reflection with lateral gradient chiroptical properties for photonic applications.

The Supplementary Material for this article can be found online at: https://www.frontiersin.org/articles/10.3389/fbioe.2021.608965/full#supplementary-material

Copyright © 2021 Tao, Li, Yu, Wei and Xu. This is an open-access article distributed under the terms of the Creative Commons Attribution License (CC BY). The use, distribution or reproduction in other forums is permitted, provided the original author(s) and the copyright owner(s) are credited and that the original publication in this journal is cited, in accordance with accepted academic practice. No use, distribution or reproduction is permitted which does not comply with these terms.