The nucleic acid-based technique has been widely utilized in many fields including for on-site detection. However, traditional molecular detection techniques encounter limitations like relying on instruments, time consuming or complex operation, and cannot meet the demands of on-site testing. In this study, a rapid DNA extraction method (RDEM), recombinase aided amplification (RAA), and chemical heating packet (CHP) are integrated and termed as RRC platform for on-site detection of nucleic acid. For demonstration purposes, SHZD32-1 (a new transgenic soybean line from China) was detected using the novel platform to demonstrate its feasibility and capability for on-site detection. Using the RDEM, high-quality DNA appropriate for molecular detection was quickly extracted in 3–5 min. The heat energy generated by CHP was met the temperature requirements of RAA. Using the RRC platform, the whole detection process can be accomplished within only 30 min, and the results can be visually detected with glasses under blue light. No special or expensive instrument was needed for the detection process. This study provides a novel approach for on-site detection of nucleic acids besides providing valuable insight on related future research.

At present, numerous nucleic acid-based analytical techniques were developed. It has been extensively applied in many fields including disease detection, food safety, and environmental monitoring (Van Nguyen et al., 2019; Zhang et al., 2020). However, there are some limitations in on-site detection or diagnosis using nucleic acid-based methods.

With regard to amplification, polymerase chain reaction (PCR) is the most popular method. It is consider as the universal standard for molecular detection. However, the thermal cycling steps in large and expensive equipment required by PCR hinder its application in on-site detection. Isothermal nucleic acid amplification (INAA) has emerged as a potential alternative for PCR. In INAA, rapid amplification is achieved at a constant temperature and does not require large-scale equipment. Currently, a large number of INAA-related studies have been published, such as recombinase aided amplification (RAA) (Piepenburg et al., 2006), cross-priming amplification (CPA) (Xu, et al., 2012), loop-mediated isothermal amplification (LAMP) (Notomi, et al., 2000), and rolling circle amplification (RCA) (Lizardi, et al., 1998). Among these INAA methods, RAA is an extraordinary isothermal system that simulates in-vivo DNA replication (Piepenburg, et al., 2006). Initial denaturation is not required for the template DNA, so it can be carried out under a relatively low temperature (about 39°C). Exponential amplification can be accomplished within a short time. RAA technology is increasingly used in many fields such as detection of DNA, RNA virus, and fungal pathogens etc. (Lobato and O'Sullivan, 2018), and has demonstrated high applicability for on-site detection (Chen et al., 2020; Zhang, et al., 2021).

The last step entails the production detection. Agarose gel electrophoresis is the traditional method used for the production detection. New production detection methods like DNA intercalating dye, fluorescence probe, lateral flow dipstick, and nanoparticle have been discovered. However, these methods exhibit some limitations in on-site detection, including: the DNA dye would affect the efficiency of the amplification, fluorescence probe requires a special instrument to monitor the fluorescence signal, and the preparation either lateral flow dipstick or nanoparticle is complicated and expensive. Regarding the on-site detection, to meet the requirement of applications in field detection and poor-resource areas, the detection process should be simple, rapid and instrument-free. 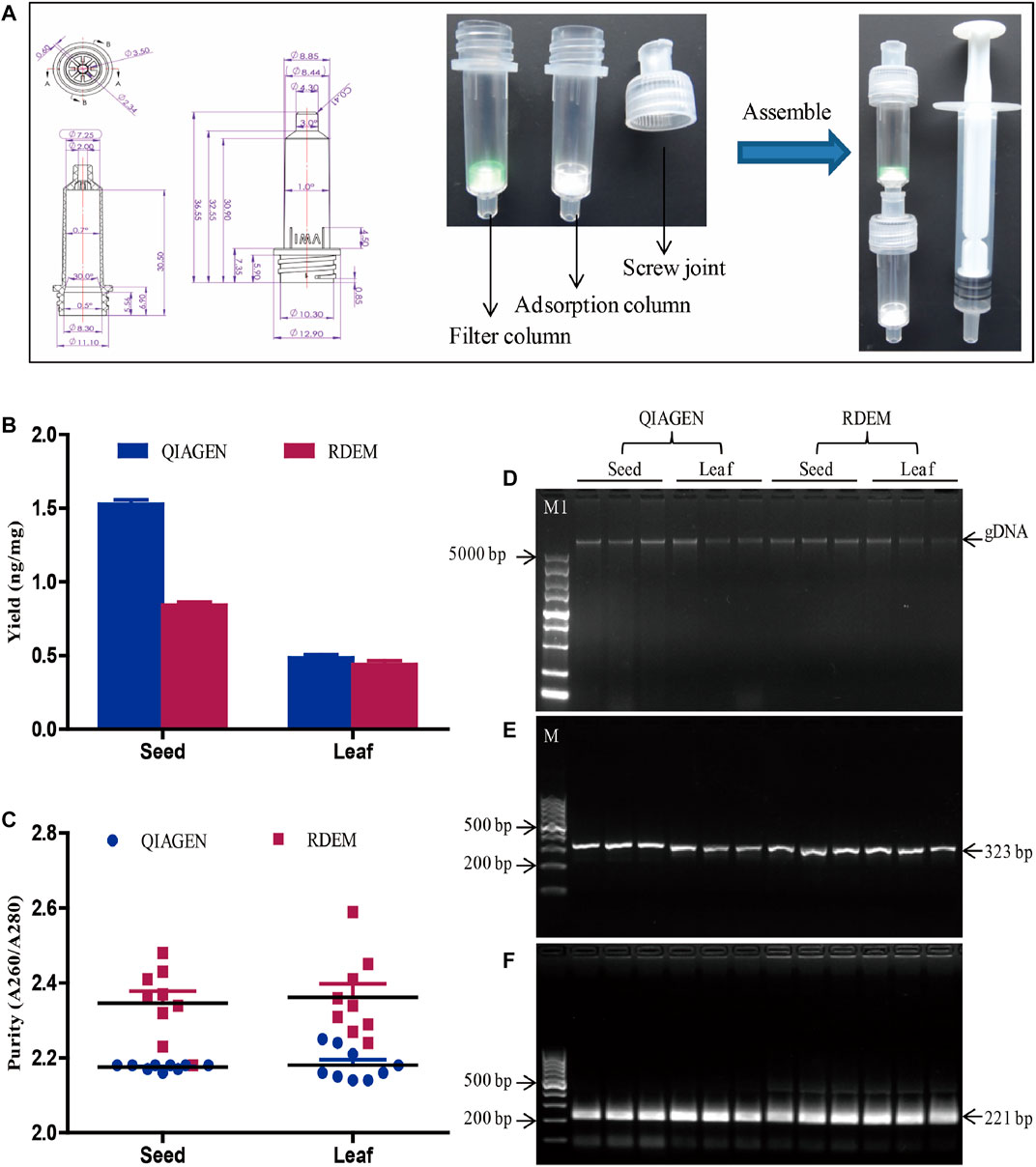 The RAA reactions were conducted based on to the manufacturer’s guidelines (Exo kit/basic kit, Amp-future Biotech, Weifang, China). The total volume of the RAA system was 50 µL. It consisted of 29.4 µL buffer, 14 mM magnesium acetate, 1 µL DNA template, one lyophilized enzyme pellet, 400 nM primers with or without 120 nM probe, and nuclease-free water up to 50 µL. The schematic of RAA and it’s exo probe was provided in Supplementary Figure S1. The optimal combination of the primers with the probe was selected (Supplementary Figure S2). The conventional PCR and RT-PCR used in this study were based on previous studies (Wang, et al., 2017, 2020). All the primers and probes were produced by Sangon Biotech Co., Ltd. (Shanghai, China). Detailed information on all the primers and probes is as described in Supplementary Table S1.

For product detection, the results of basic RAA and conventional PCR were analyzed by agarose gel electrophoresis. The real-time fluorescence signal of RAA with exo-probe and RT-PCR were monitored by a Bio-Rad CFX96 RT-PCR Detection System (Bio-Rad Company, Pleasanton, CA, United States). The visual green fluorescence result was obtained with glasses under a hand-held lamp (LUYOR-3415RG).

Preparation of the Chemical Heating Packet

Evaluation of the Applicability of the Rapid DNA Extraction Method 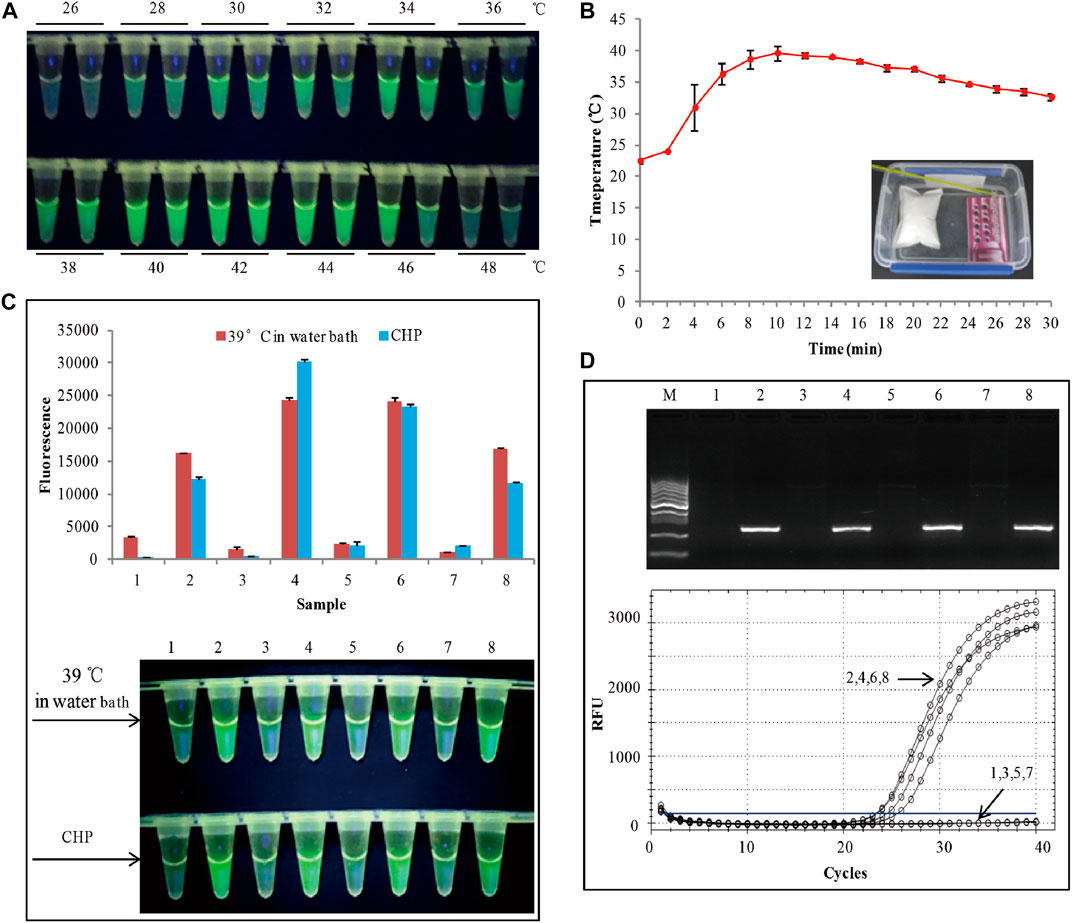 FIGURE 2. (A) Assessment of the RAA temperature range. (B) Water heated by the chemical heating packet for 30 min. (C) The RAA was triggered by a water bath at 39°C. The top panel shows the end-point fluorescence values of the two RAA assays. The bottom panel shows the visual fluorescence outcomes of the two RAA assays. (D)The detection results of conventional PCR and RT-PCR. 1,3,5,7: non-GM soya, 2,4,6,8: SHZD32-1, M: DL1000 DNA marker.

Based on the above findings, we decided to apply chemical heating to stimulate the RAA reaction. To meet the temperature range for the RAA reaction, we adjusted the amount of each chemical composition in the chemical heating packet (CHP). With an ambient temperature of 24°C, at 2 min, the water temperature was 24°C, and at 4 min, it rose to 31° (Figure 2B). From 4 to 24 min, the mean water temperature was 37°C. Besides, the heating temperature by the CHP was also based on the ambient temperatures of 4°C and 34°C, respectively (Supplementary Figure S3). The results indicated that from 4 to 24 min, the mean water temperature was >36°C. This met the RAA temperature requirements. We used the chemical heating packet (for 4–24 min) to activate the RAA reaction, and 4 SHZD32-1 and 4 non-GM soybeans were the testing samples. Similar RAA reaction was performed at 39°C in a water bath for 20 min. The visual fluorescence results of the two RAA reactions were similar. In both reactions, a bright green fluorescence was observed in the tube with SHZD32-1, whereas no fluorescence was observed in the tube with non-GM soybean (Figure 2C and Supplementary Figure S3). Simultaneously, the endpoint fluorescence values (using Cytation 5, BioTek, Instruments, Inc., Winooski, VT, United States) of the two distinct RAA reactions were compared, and it was realized they had similar fluorescence values (Figure 2C). At the same time, conventional PCR and RT-PCR were used to detect the same samples, and the detection outcomes were consistent with the result of the RAA assay (Figure 2D). These results suggested that the chemical heating packet that we designed met the temperature requirements of RAA.

Besides, the specificity and sensitivity of the RAA for SHZD32-1 was evaluated using the RRC platform (Supplementary Figure S4). The results demonstrated that the designed RRC platform was highly specific and sensitive. It was hence appropriate for on-site detection of SHZD32-1.

To evaluate the applicability of the RRC platform in on-site detection of real samples, 96 leaves from 96 soybeans were used as the real samples. A brief workflow is demonstrated in Figure 3A. All DNA was extracted by RDEM, and used as the template for both the RT-PCR and RAA. The visual fluorescence result of the RRC platform indicated that, 22 SHZD32-1 were detected from the 96 samples. The bright green fluorescence presented in the tubes with SHZD32-1. It was therefore easy to distinguish from other tubes without SHZD32-1 (Figure 3B). Besides, the 96-well plate of the RRC platform was analyzed using a fluorescence imaging system (ChemiDoc Imaging System, Bio-Rad, United States). A white fluorescence was observed in these tubes (Figure 3B). This outcome implied that the visualized result of the handheld fluorescent lamp was comparable to the observation result by a large professional instrument. In addition, the on-site detection findings of the RRC platform and RT-PCR were consistent. The same 22 samples were realized to be SHZD32-1 from the 96 samples based on the RT-PCR assay, and the Ct values of the 22 samples were given along with the amplification curve (Figure 3C). These findings suggested that the RRC platform is highly accurate for on-site detection of target nucleic acid. 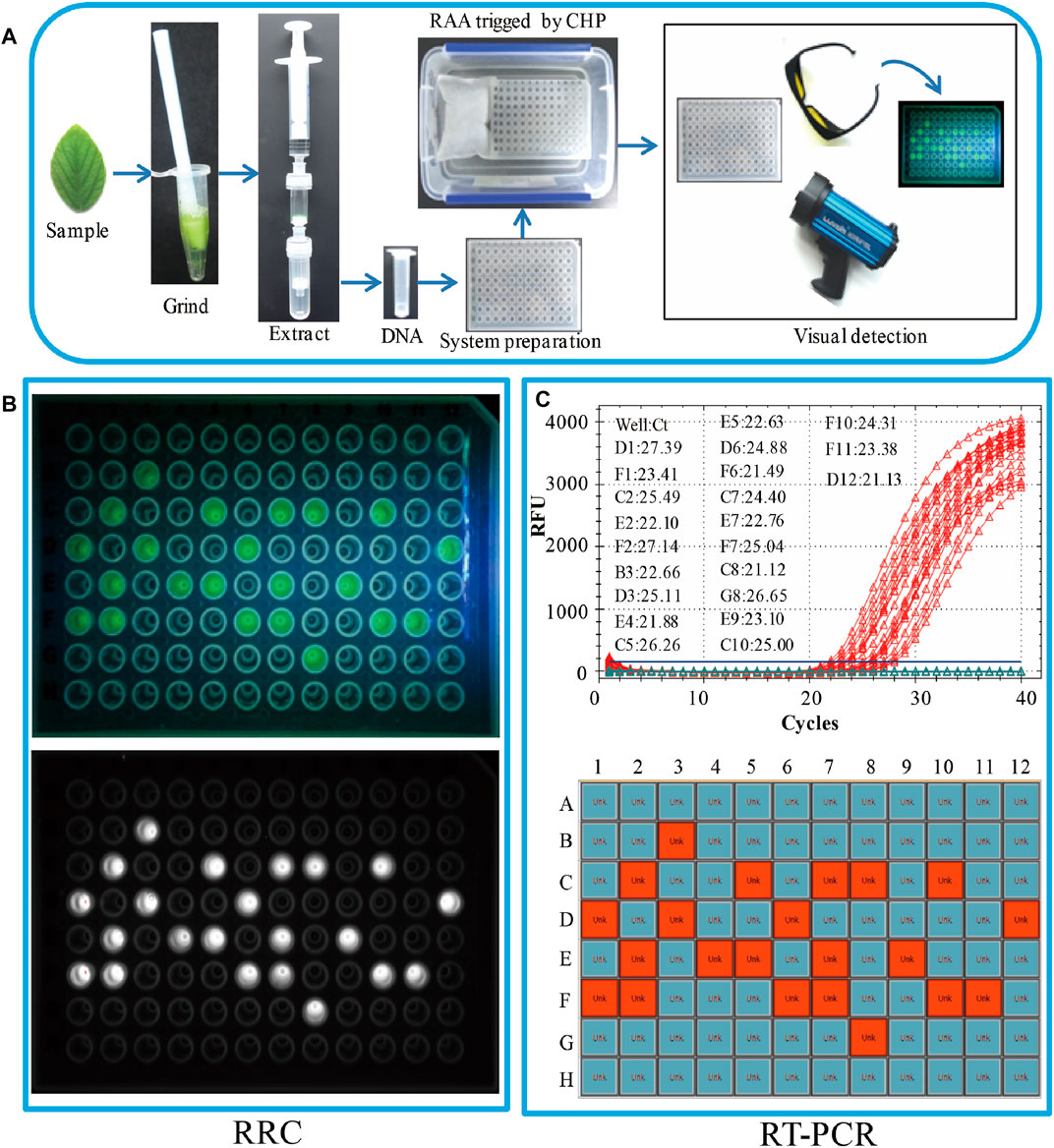 We developed a new platform (RRC) to combine a rapid DNA extraction method (RDEM) with RAA trigged by a chemical heating packet (CHP) for on-site detection. The whole detection process was completed within 30 min. Besides, the detection result could be directly observed with glasses, and no need open tubes that eliminated the carryover contamination. The RRC platform demonstrated a high specificity as well as sensitivity. In addition, the entire detection process of this platform was rapid and independent of any equipment. As such, the proposed platform suggests a high potential applicability in many fields, and the development of this platform provides valuable insight on the establishment of a new on-site nucleic acid detection technique.

This work was supported by the National Natural Science Foundation of China (31772098) and Key Technology Research and Development Program of Zhejiang (2021C02059).

The Supplementary Material for this article can be found online at: https://www.frontiersin.org/articles/10.3389/fbioe.2021.764306/full#supplementary-material

Copyright © 2021 Wang, Chen, Guo, Peng, Chen, Xu, Wei, Yang, Ca and Xu. This is an open-access article distributed under the terms of the Creative Commons Attribution License (CC BY). The use, distribution or reproduction in other forums is permitted, provided the original author(s) and the copyright owner(s) are credited and that the original publication in this journal is cited, in accordance with accepted academic practice. No use, distribution or reproduction is permitted which does not comply with these terms.