SERine Protein INhibitor-A1 (SERPINA1) is an inducible blood cell gene coding for alpha1-antitrypsin (AAT), a plasma protease inhibitor whose circulating levels are raised during inflammation, infection and advanced pregnancy. DNA methylation has been suggested to play a role in SERPINA1 gene expression regulation in peripheral blood mononuclear cells (PBMCs). The methylation status of SERPINA1 in PBMCs is unknown. The aim of this study was to evaluate the methylation profile of the SERPINA1 promoter in PBMC. To this purpose PBMCs and serum were collected from healthy subjects (HS) (n = 75), including blood donors (BD) (n = 25), pregnant women at early pregnancy (EP) (n = 25), i.e., within the first trimester, and pregnant women at late pregnancy (LP) (n = 25), i.e., at the third trimester. DNA from PBMCs was treated with sodium bisulfite and PCR amplified for SERPINA1 gene promoter, followed by sequencing analyses. AAT serum levels were determined by ELISA test. SERPINA1 was found hypermethylated in 58.7% of HS. The prevalence of SERPINA1 hypermethylation was significantly higher in BD (68%) and EP (88%) than in LP (20%) (p < 0.01). The median serum AAT concentration was 1.07, 0.63, and 3.15 mg/ml in BD, EP, and LP, respectively (p < 0.05, BD and EP vs LP). This study indicates, for the first time, that SERPINA1 gene promoter is differentially methylated in PBMCs from HS. Likely, modulation of the methylation may be a novel epigenetic regulator mechanism of AAT expression in the PBMC of HS. Therefore, SERPINA1 gene promoter methylation may represent an epigenetic biomarker of PBMCs in healthy subjects.

Serine Protease Inhibitor-A1 (SERPINA1) gene encodes for Alpha1-AntiTrypsin (AAT), the second most abundant circulating serum protein (Ferrarotti et al., 2012). AAT is a protease inhibitor released from the hepatocytes constitutively (Miravitlles, 2012). It is primarily active in inflammation sites, where it plays a protective role for healthy cells adjacent to the inflamed tissue (Stockley, 2015). Indeed, AAT is delivered through the blood to the inflammation site, where it inhibits different proteases, in particular the elastase produced by neutrophils (Stockley, 2015). AAT activity is very high in the lower respiratory tract, where it provides more than 90% of the defenses against the elastolytic load of neutrophils (Yuan et al., 2018). AAT is also an acute-phase protein, and it is released in an inducible manner from hepatocytes and blood cells upon activation of SERPINA1 inflammation-responsive promoter (Perlino et al., 1987). Levels of circulating serum AAT have been shown to be increased four-folds during infections, tissue injury and inflammation. Moreover, serum AAT levels increase physiologically four- to six-folds during the third trimester of pregnancy, and in elderly (Ferrarotti et al., 2012; Madar et al., 2013). How AAT could rise physiologically and maintain high levels for prolonged periods is not yet known. Regarding pregnancy, this is an important aspect given that lack of AAT increase exposes pregnant women and fetus to serious pathologies, such as pre-eclampsia and intrauterine fetal growth restriction (IUGR), which is the main cause of premature delivery and fetal mortality (Karowicz-Bilińska et al., 2007; Feng et al., 2016).

To this aim, the methylation profile of SERPINA1 gene promoter was investigated in PBMC from HS. The SERPINA1 promoter region located upstream of the transcription starting site containing eight CpGs and one binding site for TFs, was analyzed for the methylation. This promoter region includes the two CpGs found differentially methylated in the EWAS study (Qiu et al., 2012). PBMCs from three HS cohorts were collected: (i) blood donors (BD), (ii) pregnant women at early pregnancy (EP), and (iii) pregnant women at late pregnancy (LP). To assess the biological differences among HS cohorts, serum AAT level was evaluated in BD, EP, and LP.

Blood was from 75 healthy subjects (HS), including blood donors (BD) (n = 25), pregnant women at early pregnancy (EP), i.e., within the first trimester of gestation (n = 25), and pregnant women at late pregnancy (LP), i.e., at the third trimester of gestation (n = 25). Mean age ± standard deviation [SD] was 51.41 ± 11.07 years in BD, 32.62 ± 5.75 years in EP, and 34 ± 3.16 years in LP (BD vs EP, and LP, p < 0.0001; EP vs LP, p > 0.05). Blood samples were collected at the Clinical Analysis Laboratory, University Hospital of Ferrara, Ferrara, Italy. The hospital clinical records indicated that BD subjects and LP and EP women were in healthy conditions at the time of sample collection. Indeed, BD, EP, and LP samples belonged to healthy subjects, being blood analysis parameters in the normal index range. Blood samples from pregnant women were collected before surgical intervention from women underwent voluntary abortion (EP), and during the routinely controls of gestation (LP) (Tagliapietra et al., 2019, 2020). The County Ethical Committee of the University Hospital of Ferrara approved this study in accordance with the Declaration of Helsinki. Written informed consent was obtained from all subjects. PBMC and serum were separated by density gradient centrifugation (Tagliapietra et al., 2019). DNA was isolated from PBMCs using the QIAmp DNA Mini Extraction Kit (Qiagen, Milan, Italy) (Tagliapietra et al., 2019). After isolation, DNA concentration/suitability was assessed by spectrophotometric reading (NanoDrop 2000, Thermo Fisher, Monza, Italy), and by β-globin PCR-amplification (Tagliapietra et al., 2019).

The AAT levels in serum samples were determined using the Human alpha 1 Antitrypsin ELISA Kit (SERPINA1) (ab189579) (Abcam, Cambridge, United Kingdom), as reported (Hennawy et al., 2016). Diluted sera and antibody cocktails were incubated with AAT antibodies in pre-coated wells. After addition of 3,3′,5,5′-tetramethylbenzidine substrate, the colorimetric signal was read by optical density (OD) at a wavelength of 450 nm. The concentration of AAT was measured in duplicates, interpolated from the AAT standard curves (provided by the kit) and corrected for sample dilution (1:100,000), according to manufacturer’s instructions. The final AAT concentration in sera was reported as mg/mL.

The chi-square trend test with Yate’s correction was used to compare SERPINA1 hypermethylation frequencies among BD, EP, and LP. Serum AAT values were analyzed with D’Agostino-Pearson test for normality, and values were compared using the non-parametric Mann–Whitney-U-test (Malagutti et al., 2020). Analyses were carried out using the GraphPad Prism 6.0 and the R package 3.5.0. P ≤ 0.05 was considered statistically significant. 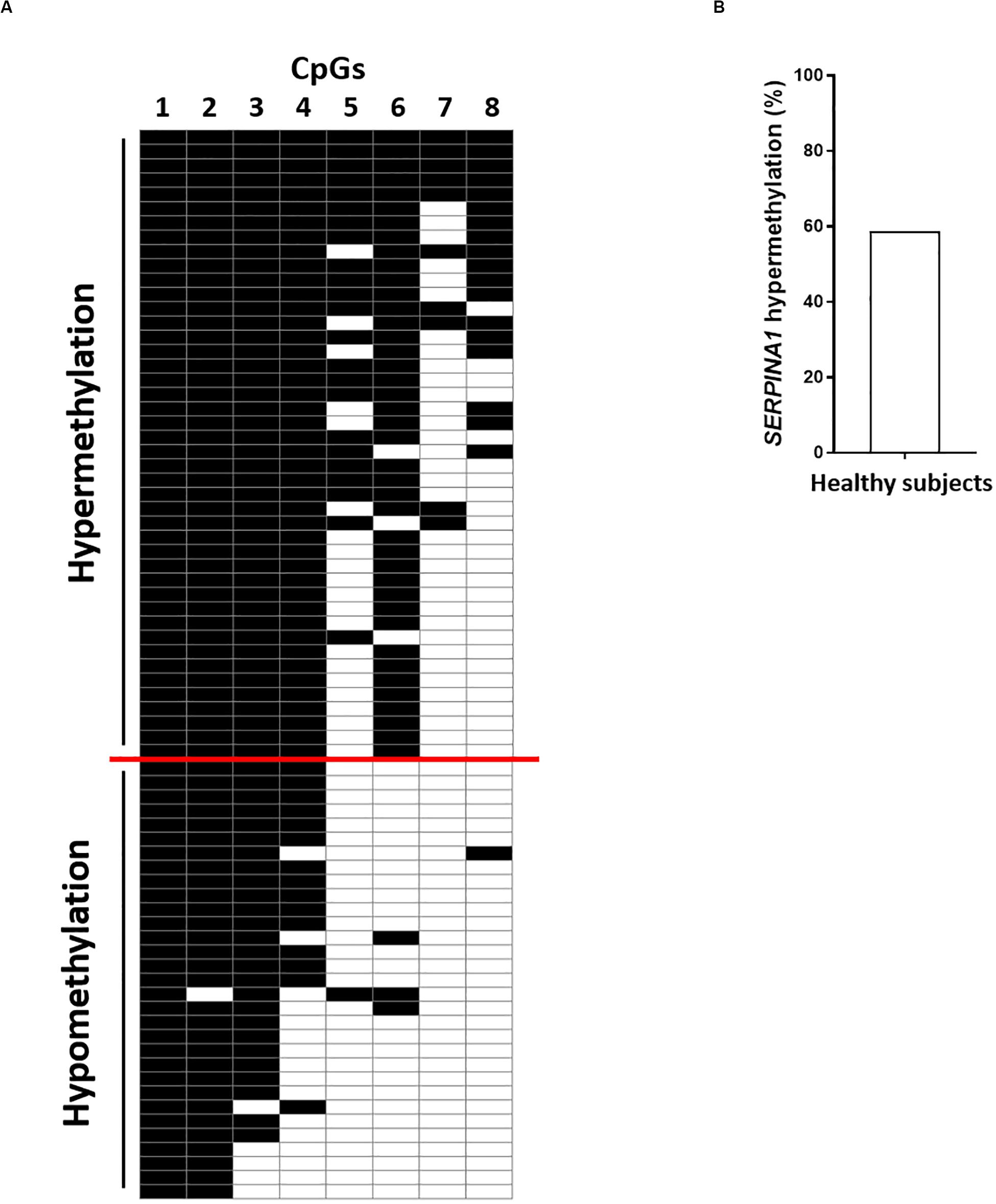 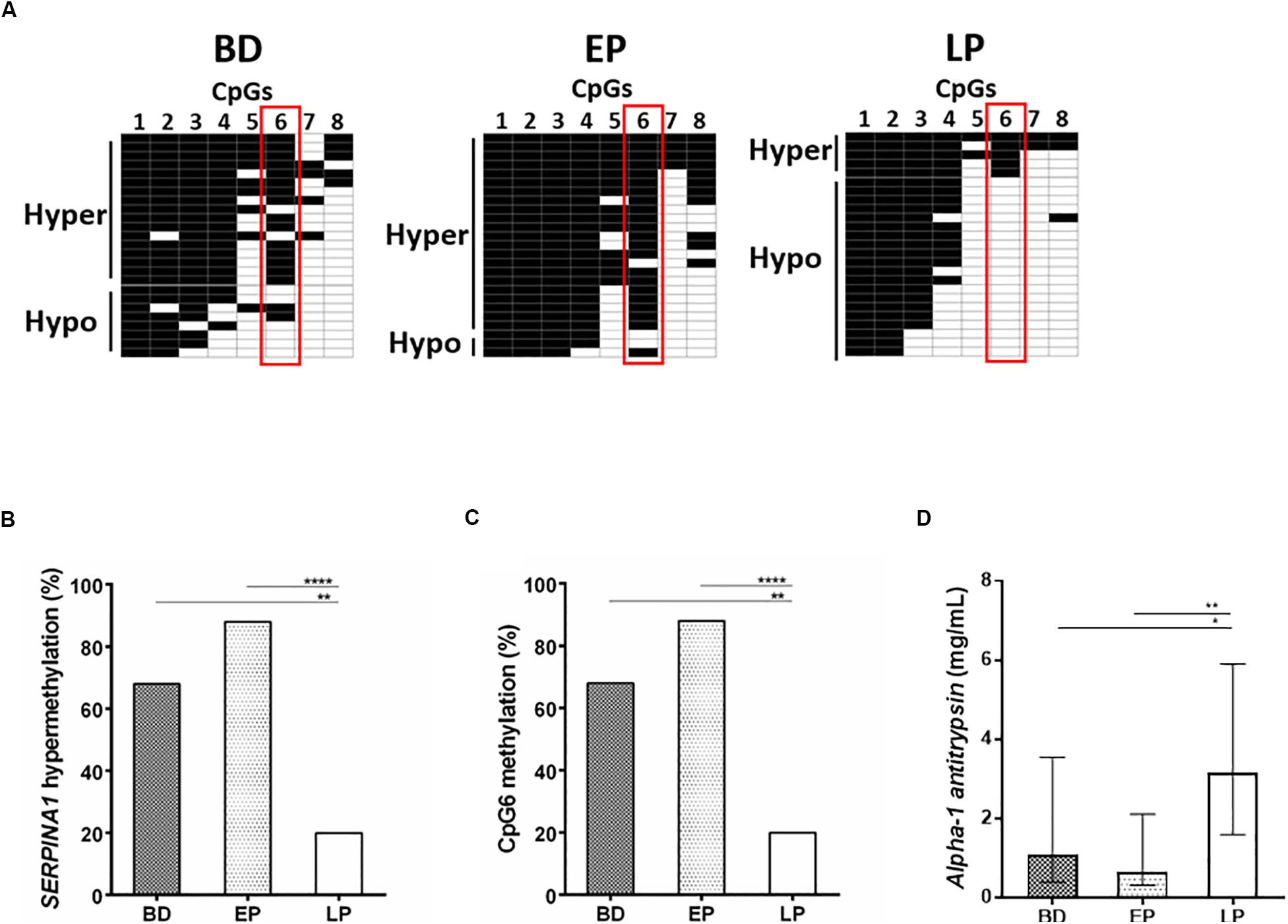 In the present study, the methylation profile of SERPINA1 gene promoter was investigated in PBMCs from three different HS cohorts, including BD, EP, and LP. Circulating AAT serum levels were investigated to assess biological differences among BD, EP, and LP groups. The LP group was particularly suitable to investigate impactful epigenetic changes in SERPINA1 gene, since systemic AAT increases physiologically four-six-fold during the third trimester of pregnancy.

The circulating levels of AAT were investigated in serum samples from HS, including BD, EP, and LP. Immunological data showed that the median AAT concentration was 1.07, 0.63, and 3.15 mg/ml in BD, EP and LP, respectively (BD and EP vs LP, p < 0.05). These results are in agreement with previous data, reporting serum AAT concentration ranging 1.5–3.5 mg/mL in healthy individuals, including women at early pregnancy, and four/six-fold higher during the third trimester of pregnancy (Baron et al., 2012).

Taken together, our data show two different SERPINA1 gene methylation profiles in the PBMC of HS, one LP-associated hypomethylated, and one BD-EP-associated hypermethylated, suggesting methylation as a novel regulator of the AAT expression. Therefore, the modulation of methylation in the SERPINA1 gene promoter may allow AAT to be expressed in the PBMC of LP, and repressed in BD and EP. The reasons of this epigenetic regulation, and how it impacts in the LP women are currently unknown. However, DNA methylation results in long-term changes in gene expression (Hartley et al., 2013), which are crucial in controlling the longer term effects of stressors, such as oxidative stress and inflammation, typical conditions of the advanced pregnancy (Morris et al., 1998). In addition, several recent studies have highlighted immune regulatory roles of AAT, independent of protease inhibition, including induction of IL-10, suppression of plasma pro-inflammatory cytokines (Lewis et al., 2008; Persichini et al., 2016) and, interestingly, induction of immune tolerance in bone marrow transplants (Lewis et al., 2008). In this view, long-lasting profile of SERPINA1 gene hypomethylation may provide long-lasting increases in circulating AAT protein in LP women, allowing pregnancy stresses to be counteracted, and/or the maternal immune tolerance toward the fetus to be sustained for successfully pregnancy outcome. Indeed, lack of increase in ATT in the blood of pregnant women is associated with pregnancy complications, including the spontaneous abortion and premature rupture of membranes (Baron et al., 2012; Twina et al., 2012).

In conclusion, this study indicates that the SERPINA1 gene promoter is differentially methylated in PBMCs from HS, showing hypermethylation in BD and EP, and hypomethylation in LP. Likely, under specific physiological conditions, such as advanced pregnancy, modulation of the SERPINA1 gene promoter methylation may allow long-lasting expression of AAT. This epigenetic mechanism may allow SERPINA1 to be expressed independently from inflammation/infection, enabling AAT to be risen physiologically and maintained at high levels for long time period during the late pregnancy. In this view, SERPINA1 epigenetic regulation may guarantee AAT to be active not only as inflammatory/infection-induced protease inhibitor but also as immunomodulatory and tolerogenic protein, which could be the main AAT activities during the late pregnancy.

Therefore, methylation may be a novel epigenetic regulator mechanism of AAT expression in PBMC of HS. Further studies are needed to assess the direct link between AAT circulating levels and SERPINA1 promoter methylation in PBMCs.

The studies involving human participants were reviewed and approved by the County Ethical Committee of the University Hospital of Ferrara in accordance with the Declaration of Helsinki. Written informed consent was obtained from all subjects.

FM, PR, and MT: study concept, design, and supervision. JR, LO-G, and RS: sample collection, analysis, interpretation of the data, and experiments execution. JR, RS, CL, CM, and GC: the data curation and interpretation, statistical analysis with software, and the data visualization. MT, MD, JR, and FM: writing of the manuscript and original draft preparation. MD, GC, PR, RP, FM, and MT: critical revision and discussion of the manuscript. MT and FM: funding acquisition and project administration. All authors contributed to the article and approved the submitted version.

This study was supported by the University of Ferrara, FAR grants (2017 and 2018 to MT and FM). JR was a postdoctoral fellow from the Fondazione Umberto Veronesi, Milan, Italy (2019–2020).

Copyright © 2020 Rotondo, Oton-Gonzalez, Selvatici, Rizzo, Pavasini, Campo, Lanzillotti, Mazziotta, De Mattei, Tognon and Martini. This is an open-access article distributed under the terms of the Creative Commons Attribution License (CC BY). The use, distribution or reproduction in other forums is permitted, provided the original author(s) and the copyright owner(s) are credited and that the original publication in this journal is cited, in accordance with accepted academic practice. No use, distribution or reproduction is permitted which does not comply with these terms.