Hypoxic-ischemic brain damage (HIBD) is a common central nervous system lesion in perinatal neonates, and 25% of neonatal HIBD can develop into severe and permanent neuropsychological sequelae, including developmental delay, cerebral palsy and epilepsy, and there is still no effective therapy for the disease (Liang et al., 2010; Sobrino et al., 2020; Truttmann et al., 2020). Gene therapy for brain damage has become a popular research field, due to its potential for long-lasting and stable effects. However, whether the target gene can have an efficient and regulable expression in a safe context remains an open question in gene therapy. Therefore, it is urgent to find a relatively safe and efficient gene therapy to prevent HIBD.

Vascular endothelial growth factor (VEGF) is a specific mitogen of endothelial cells. It can be secreted to the space outside cells, act on vascular endothelial cells to stimulate the proliferation and migration of cells, and accelerate angiogenesis. It has a direct, protective effect on nerve tissues before the formation of new blood vessels, and can, to some extent, reduce neuronal damage. Additionally, VEGF can promote the proliferation of NSCs cultured outside the body (Zhang et al., 2000; Zheng et al., 2012). HRE is a hypoxic-sensitive enhancer which can significantly enhance the expression levels of downstream genes under hypoxic conditions. There is a cis-acting element that can regulate VEGF gene transcription during hypoxia, in the 5′ native promoter region of the VEGF gene. We therefore constructed a VEGF gene fragment, with the HRE promoter in the upstream gene sequence, and transfected this fragment into the NSCs to explore whether HRE can significantly enhance the expression of VEGF under hypoxic conditions.

This experiment aims to construct a recombinant, lentivirus carrying VEGF gene, and a VEGF-gene recombinant lentivirus carrying the HRE, and to transfect two groups of target genes into neural stem cells by lentivirus, to obtain genetically engineered NSCs with expressed VEGF, and culture them in different conditions. Our study revealed that transfection of HRE-VEGF can effectively promote the proliferation of neural stem cells, providing a safe and efficient gene therapy for hypoxic-ischemic brain damage.

Take a pregnant Sprague Dawley (SD) rat at 14 gestational days. Use pre-cooling sterile 1 × PBS with a Pasteur pipette to rinse out the meninges and vascular tissues. Add 3 ml DMEM/F12 (1:1) (Gibco, United States) containing 10% fetal bovine serum to a 12-well plate with cell slide. Cells were incubated at 37°C under a 5% CO2 atmosphere for 5 days. Renew half of the medium every 2∼3 days according to the growth of the neural stem cells. Place the culture flask under a microscope to observe cell proliferation and growth from multiple fields of vision. After about 7 days of culture, well-formed neurospheres can be observed with a microscope. Continue the subculture according to the steps described above.

Induced Differentiation of NSCs Outside the Body

On the 5th day of the induced differentiation of NSCs, remove cell slides from the 12-well plate. Cells were blocked with 10% goat serum containing 0.3% Triton X-100 for 2 h and then incubated with primary antibodies overnight at 4°C, then add 0.5 μg/ml DAPI onto the slide to stain the nucleus; gently wash it on a shaker with 1 × PBS. The following primary antibodies were used: 1:100 diluted rabbit anti-GFAP antibody or as the primary antibody and the 1:50 goat anti-rabbit IgG-FITC as the secondary antibody. Images were obtained with Leica fluorescence microscope.

The corresponding primers were designed according to the CDS region (base sequence: No. 72–650, with 579 bases in total) and the hVEGF165 gene sequence (AF486837) of the HRE gene (No. NM007942.2) released by GENBANK. The primers were synthesized by GENECHEM (Shanghai, China). The primer sequences are displayed as follows. HRE: (Forward) 5′-CGT CTAGAGTCGACGCGGCCGCATCCGCGCCAC-3′ (Reverse) 5′-CGGGAGACTCGAGGCCGGCGTACGACGAC-3′; VEGF: (Forward) 5′-GAGGATCCCCGGGTACCGGTCGCCACCATG AACTTTCTGCTGTCTTGG-3′ (Reverse) 5′-TCACCATGGTG GCGACCGGCCGCCTCGGCTTGTCAC-3′.

Infecting the Target Cells With Lentivirus

Efficiency of Transfection Under Flow Cytometry

Collect cells in a 1.5 ml sterile centrifuge tube and centrifuge at 1000 rpm for 5 min; discard the supernatant liquid. Then add 1–2 ml pasteurized sterile PBS solution to re-suspend the cells; blow and beat and shock the small cell mass to obtain a single-cell suspension; place it on a flow cytometer to detect the rate of GFP-positive cells. Non-transfected NSC groups serve as control groups.

Expression of VEGF165 Protein in the Neural Stem Cells of Transgenic Rats, Under Western-Blot

According to the sample size, set the ratio of Reagent A to Reagent B at 50:1 and then prepare a proper amount of BCA working solution; add 200 μL BCA working solution to each well and incubate at 37°C for 30 min. Draw a standard curve on the microplate reader; figure out the protein concentration in the standard curve, based on the OD value and dilution ratio of the tested sample. Corresponding to the amount of loading buffer, put the mix (loading buffer with the protein) in boiling water for 10 min to denature; then store it at −20°C for later use. Add 50 μg of the sample to the loading well of the SDS-PAGE gel and observe. After the bromophenol blue enters the separated gel surface, adjust the voltage to 120V; at room temperature, soak the gel plate in a staining tank containing 0.01% Coomassie brilliant blue, and a blue protein band can be observed. Rinse the filter membrane in the TBST solution for 5 min, and then put the filter membrane in 5% skimmed milk; block at room temperature for 3 h; then place the filter membrane in a hybridization bag and add the 1:100 (dilute the antibody with the primary antibody dilution) diluted primary antibody solution; incubate overnight at 4°C. On the following day, wash the filter membrane for 10 min × 3 times with TBST and then put the filter membrane in a new hybridization bag; add the 1:2000 horseradish peroxidase-labeled secondary antibody solution (dilute the antibody with the secondary antibody dilution) and place on a shaker at room temperature for 1 h; wash the membrane for 10 min × 3 times with TBST; remove the water on the membrane with filter paper, and uniformly drip the luminescent liquid on the entire membrane (ECL luminescent liquid, A:B = 1:1); place the filter membrane on the ECL machine for chemiluminescence; take photos and record.

Collect neural stem cells and adjust the cell suspension to a suitable concentration. Add the cell solution to each well (100 μL/well) of a 96-well plate. After plating, make the final density of the tested cells to be 5000 cells/well (fill edge wells with sterile PBS). Set 3 repeated wells per sample. Place the cells in an incubator for continuing culture until all wells are covered with cells in a single layer. Observe under an inverted microscope. Add the MTT staining liquid to each well (10 μL/well) and continue to culture for 4 h. Add the Formazan solution to each well (100 μL/well), and then place on a shaker for low-speed oscillation 10–30 min, to ensure the crystal substance is completely dissolved. If some of the Formazan is still not dissolved, you can gently and repeatedly blow and beat 2–3 times with a pipette to dissolve it, but bubbles should be avoided. Measure the absorbance with ELISA at 570 nm (Operate according to the requirements on the MTT cell proliferation and cytotoxicity test kits).

Data were expressed by ± s. One-way ANOVA and LSD tests were used to determine the significance of difference among groups. A p-value less than 0.05 was considered statistically significant. SPSS 16.0 software was used for the statistical analysis.

Identification of NSCs by Immunofluorescence 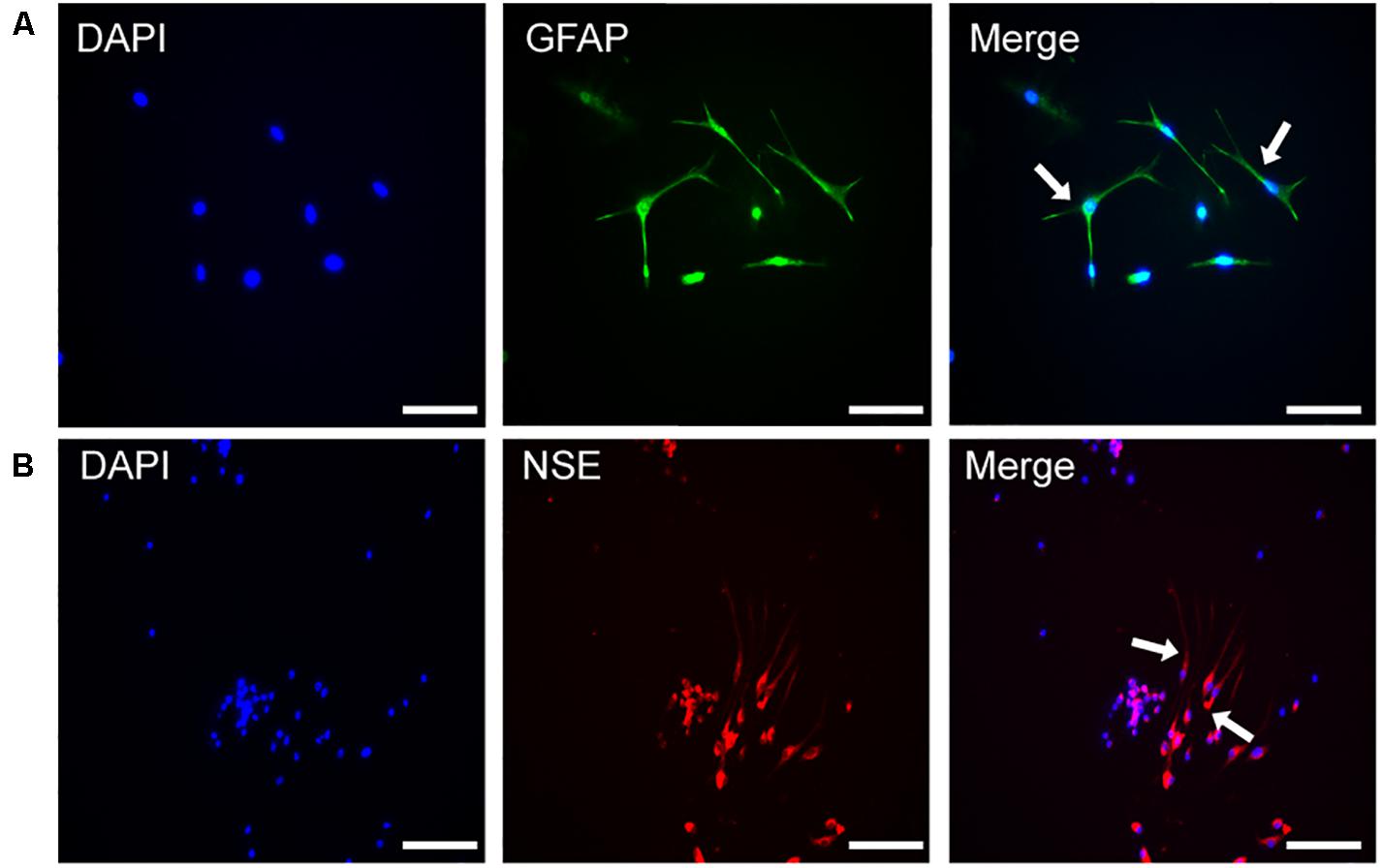 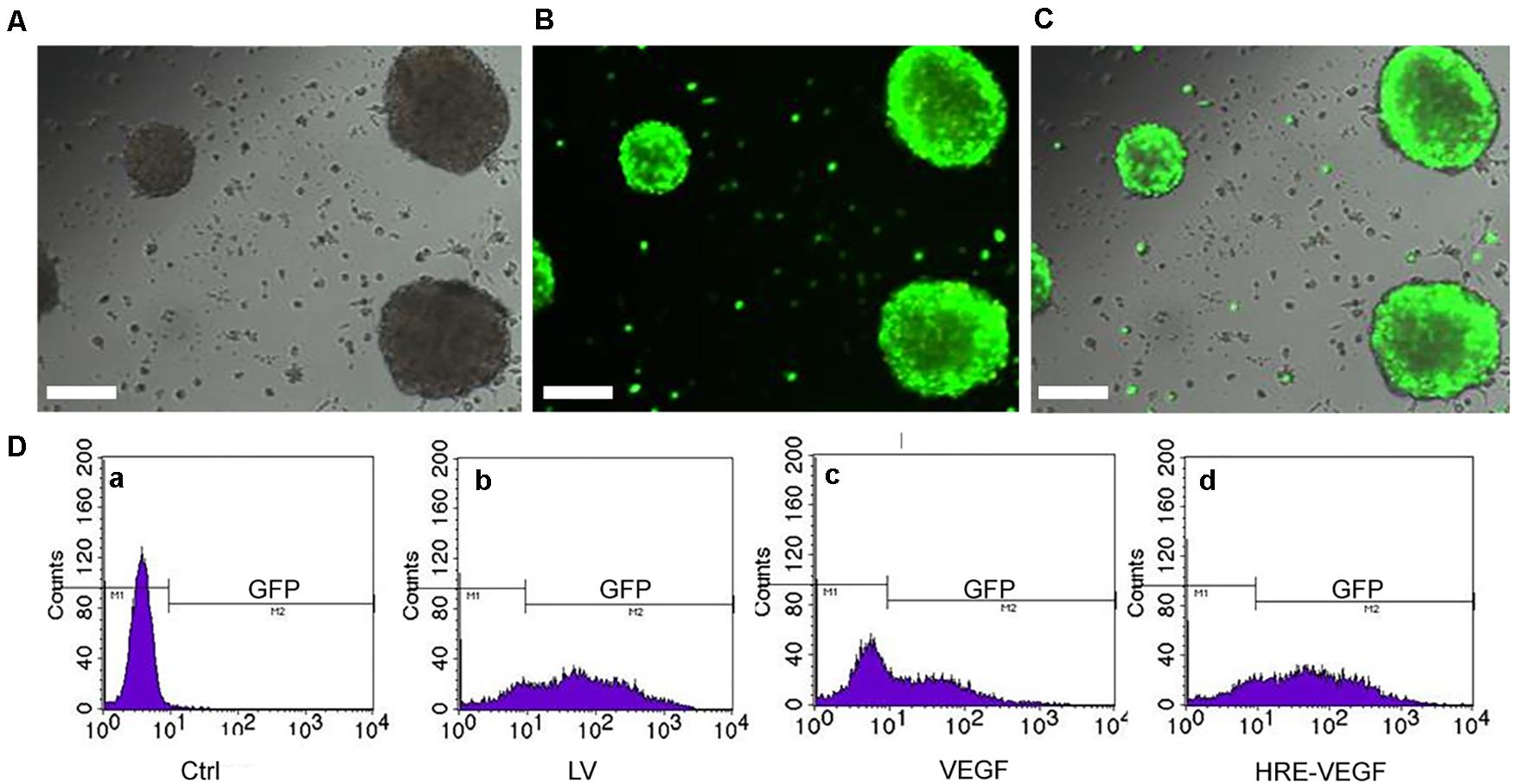 The Expression of VEGF165 in NSCs Under RT-PCR 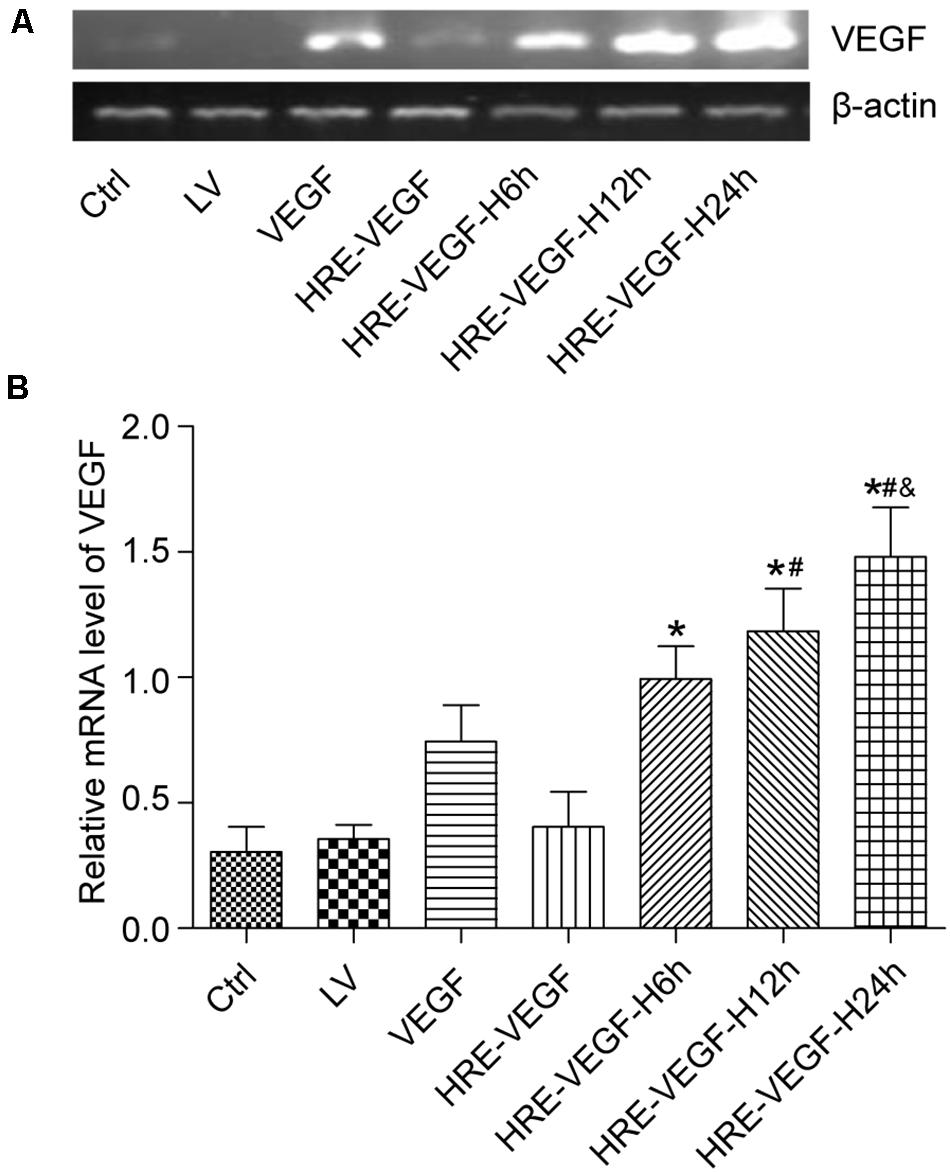 The Expression of VEGF165 Protein in NSCs Under Western-Blot 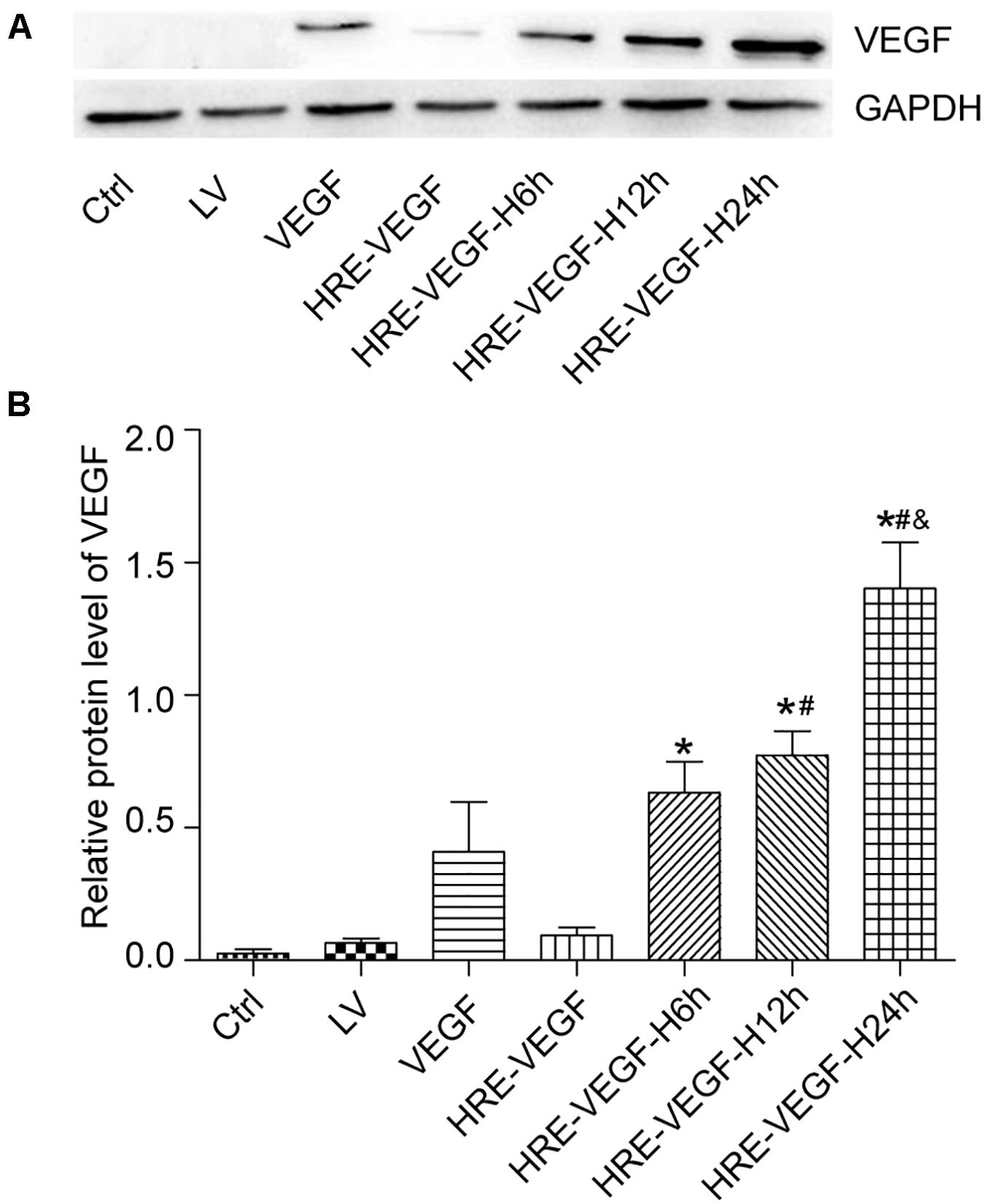 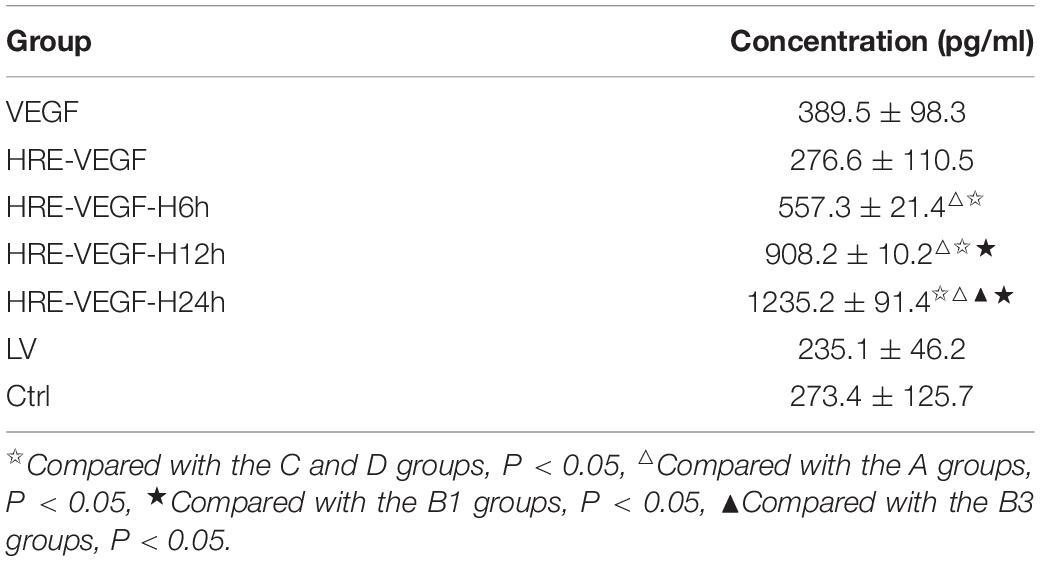 In addition, under a fluorescence microscope, no obvious green fluorescence was seen in the HRE-VEGF genetically engineered NSCs cultured under normoxia. The results of flow cytometry showed that the transfection rate was about 0.5%. The possible reasons are: (1) The target gene failed to be transfected into the target cell genome. (2) The HRE-VEGF gene was successfully transfected into the target cell genome. However, because cells were cultured under normoxic conditions, the HRE sequence could not be activated, which made the VEGF gene in the downstream region of the HRE and the GFP reporter genes, not able to properly express. Meanwhile, the HRE-VEGF genetically engineered NSCs cultured under normoxia showed no obviously expressed VEGF gene in RT-PCR and Western-blot tests. Whether normoxic conditions prevented the activation of the HRE sequence and thus caused failure in the expression of downstream genes of HRE, still needs further research.

This experiment successfully constructed hypoxic-induced genetically engineered NSCs with highly expressed VEGF genes. Under hypoxic conditions, and affected by HRE promoters, the expression of VEGF factors in the target cells increased significantly and could significantly promote the proliferation of NSCs. In addition, HRE could regulate the expression of VEGF by controlling the period of hypoxia and thus obtain efficient and regulated VEGF transgenic neural stem cells. Our work provides an experimental basis for further in vivo experiments on the transplantation of HRE-regulated VEGF-gene-transfected NSCs for HIBD in neonatal rats. Additionally, of particular note is the safety and reliability when we use virus vector, and these questions also should be considered our next study.

The animal study was reviewed and approved by the Ethics Committee of Xiangya Hospital.

XZ conceived and designed the experiments. DT and BD performed the research, and collected and analyzed the data. DT and XY wrote the manuscript. All authors read and approved the final manuscript.

Copyright © 2020 Dou, Zheng, Tan and Yin. This is an open-access article distributed under the terms of the Creative Commons Attribution License (CC BY). The use, distribution or reproduction in other forums is permitted, provided the original author(s) and the copyright owner(s) are credited and that the original publication in this journal is cited, in accordance with accepted academic practice. No use, distribution or reproduction is permitted which does not comply with these terms.