In response to LPS stimulation, TLR-signaling initiates distinct innate immune defensive programs, such as the maturation of phagosomes (Blander and Medzhitov, 2004, 2006). This process involves crosstalk between mitogen-activated protein kinase (MAPK) signaling and components of the vesicular trafficking machinery (Blander and Medzhitov, 2006; Symons et al., 2006; Fontana and Vance, 2011). TLR-4 is involved in the recognition of Gram-negative bacteria such as E. coli through recognition of prototypic LPS. TLR-2 interacts with Gram-positive bacteria following interaction with lipoproteins, proteoglycans or lipopeptides. However, several studies have highlighted that LPS recognition is not restricted to TLR-4. Indeed, TLR-2 is able to recognize the LPS from Porphyromonas gingivalis (Medzhitov, 2001; Underhill, 2004). Recent studies have highlighted that TLR-2 is required along with TLR-4 for the response to bacterial LPS (Good et al., 2012); this response involves a physical interaction between TLR-2 and TLR-4 (Lee et al., 2004; Good et al., 2012). Much remains to be learned regarding the molecular basis underlying the crosstalk between the LPS variants and TLRs.

In this study, we investigated the mechanism leading to the absence of activation of the p38α-MAPK despite TLR-4 engagement by C. burnetii vLPS. We found that the association between TLR-2 and TLR-4 is required to activate p38α-MAPK and was disrupted by the vLPS. The disruption of TLR-2 and TLR-4 association by vLPS was induced by the re-organization of the macrophage cytoskeleton. Interestingly, the block of the actin cytoskeleton re-organization inhibited the disruption of association TLR-2/TLR-4 by pathogenic C. burnetii and allowed the p38α-MAPK activation by C. burnetii LPS. We elucidated an unexpected mechanism allowing pathogenic C. burnetii to avoid activating macrophages.

In wild-type BMDMs, vLPS was unable to induce the activation of p38α MAPK (<0 RFUs), in contrast to the avLPS (13.5 RFUs at 30 min) (Figure 1) as previously described (Barry et al., 2012). These data confirm the previous finding that the recognition of vLPS by TLRs is required to block p38α MAPK activation (Barry et al., 2012). We decided to deepen our analysis by investigating the distribution of TLR-4 and TLR-2 at the membrane surface of BMDMs challenged with C. burnetii LPSs (Figure 2). In control BMDMs, we observed a large number of TLR-2 and TLR-4 fluorescent small dots (129.2 ± 12.3 and 109.5 ± 18 a.u, respectively) with a dispersed distribution at the macrophage surface (Figures 2A–C) with a reduced area (5 ± 2 and 9 ± 5 a.u, respectively) (Figures 2A,B,D). In macrophages treated with the avLPS, we found a significant decrease in TLR-2 (4.5-fold) and TLR-4 (2.8-fold) dots compared to the control (Figures 2A–C) at the macrophage surface. The decreased dot number is associated with an increase in dot area (Figures 2A,B,D). Indeed the TLR-2 and TLR-4 dot area increased significantly 7.6-fold and 4.4 fold, respectively, compared to the control (Figures 2A,B,D). vLPS induced a significant a decrease of 3.6-fold of the small dots numbers present at cell membrane (Figures 2A–C) associated with a significant reorganization of TLR-2 small dots in large patch compared to control (23 ± 3 a.u vs. 5 ± 2) (Figures 2A,B,D). Interestingly, vLPS does not affect the distribution or the size of TLR-4 fluorescent dots at the BMDMs membrane surface. Then, we assessed the co-localization of TLR-4 with TLR-2 in BMDMs treated with C. burnetii LPSs (Figures 2E). In macrophages challenged with avLPS we find a strong co-localization of TLR-4 with TLR-2 (Pearson's coefficient 0.72 ± 0.12) whereas in presence of vLPS we found that TLR2 did not co-localize with TLR-4 (Pearson's coefficient 0.1 ± 0.02). Next, we investigated, by co-immunoprecipitation, the association of TLR-2 with TLR-4 in BMDMs either challenged or not challenged with vLPS or avLPS (Figure 2F). We observed that TLR-2 and TLR-4 co-immunopreciptated in the BMDMs control as well in BMDMs challenged with avLPS. In contrast, TLR-2 and TLR-4 did not co-immunoprecipitate in macrophages treated with vLPS. Taken together this data suggests that vLPS disrupts the membrane distribution of TLR-2 and TLR-4. 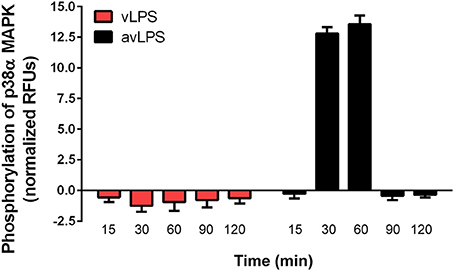 Figure 1. Activation of p38α MAPKs. BMDMs from wild type mice, were challenged with C. burnetii vLPS and avLPS (1 μg/ml) for different periods (up to 120 min). The phosphorylation of p38α MAPK was determined using phospho-p38α MAPK cell-based ELISA. The results are expressed as normalized RFU and represent the mean ± SD (n = 3). 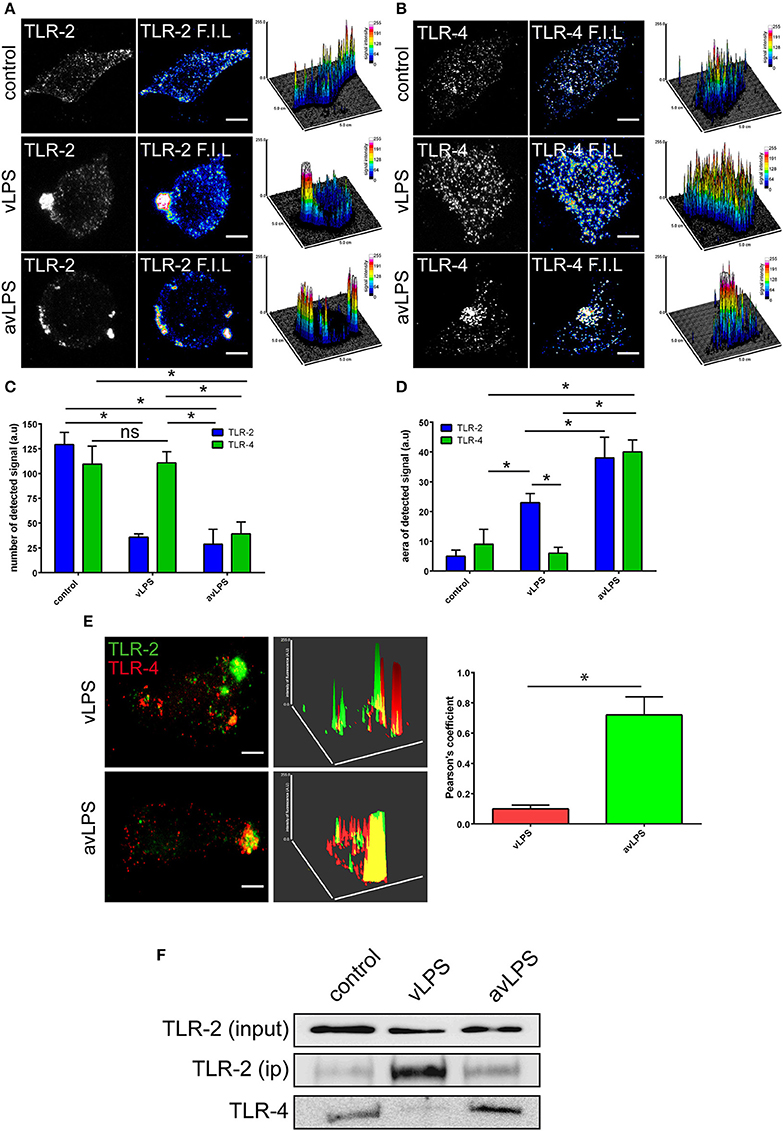 Figure 3. Cytoskeleton remodeling induced by C. burnetii LPS impairs TLRs signaling. BMDMs were challenged with (A) vLPSs or (B) avLPS at 1 μg/ml for 5 min, then F-actin was labeled with phalloidin alexa-488. Macrophages were examined by confocal microscopy. Representative cells are shown, the scale bar indicates 5 μm. (C) The percentage of BMDMs showing filopodia was evaluated. For some experiments macrophages were treated with cytochalasin-D. The results are expressed as the mean ± SD (n = 3 *p < 0.05). (D) BMDMs in non-starved conditions were either left untreated or treated with vLPS (1 μg/ml) for 5 min in presence or not of cytochalasin-D, then TLR-2 was immunoprecipitated and coimmunoprecipitated with TLR-4 was visualized by immunoblotting. The blot shown is representative of three experiments. (E) BMDMs from wild type mice were challenged with vLPS (1 μg/ml) for different periods (min) in presence or not of cytochalasin-D, and the phosphorylation of p38α MAPK was determined using phospho-p38α MAPK cell-based ELISA. The results are expressed as normalized RFU and represent the mean ± SD (n = 3).

C. burnetii, the bacteria that causes Q fever, has evolved several strategies to survive in macrophages. One of these strategies is to avoid being targeted to the degradative compartments of immune cells. To do that C. burnetii, through its vLPS, blurs its own recognition by TLR receptors in order to interfere with the transduction of the signal (Barry et al., 2012). The consequences of such strategies are a deficiency of p38α-MAPK-driven phosphorylation and a block in recruitment of the homotypic fusion. In addition, several years ago it was shown that C. burnetii interferes with the cytoskeleton, and this inference is crucial for its survival in macrophages (Meconi et al., 1998; Honstettre et al., 2004). We have investigated if the dramatic cystoskeleton re-organization induced by C. burnetii could explain the decrease of p38a MAPK signaling. In macrophages challenged with C. burnetii avLPS we observed a phosphorylation of the p38α MAPK. In contrast, p38α MAPK is not activated in macrophages challenged with vLPS has previously described (Barry et al., 2012). Because it is known that TLR-2 is required along with TLR-4 for the response to bacterial LPS (Good et al., 2012), through a physical interaction between TLR-2 and TLR-4 (Lee et al., 2004; Good et al., 2012) we have analyzed the distribution of TLR-2 and TLR-4 at the surface of macrophages via confocal microscopy. We have observed that C. burnetii vLPS induces a strong reorganization of the TLR-2 and TLR4 at the membrane. This redistribution hampers the colocalization between TLR-2 and TLR-4, in contrast to what is observed in macrophages challenged by avLPS. In addition, the co-immunopreciptation experiments highlight a physical link between TLRs in cells challenged with avLPS, whereas in cells treated with vLPS this is not found. Finally, we postulated that the TLR distribution was linked to the cytoskeleton re-organization induced by C. burnetii vLPS. Interestingly, the inhibition of the cytoskeleton reorganization by cytochalasin D allowed for the activation of p38α MAPK by vLPS. We observed also that in this condition TLR-4 co-immunoprecipitated with TLR-2. A possible mechanism to explain the role of the vLPS in the default of activation of p38α MAPK is that vLPS through the induction of the cytoskeleton remodeling, induces a relative dispersion and redistribution of TLR-2, TLR-4 receptors at outer membrane level, in such a way that TLR-2 and TLR-4 are not able to signal via p38a MAPK. Moreover, it has been already reported that a crosstalk between TLRs signaling and G-protein coupled receptors, such as Rho-GTPase and Rnd proteins, exists and could lead to a dramatic cytoskeleton rearrangement (Ruse and Knaus, 2006). Previously, we have demonstrated that C. burnetii vLPS interferes with phagosome maturation by inhibiting the activation of p38α MAPK (Barry et al., 2012), here we deepened the previous study by demonstrating that C. burnetii, through it vLPS blurs the TLR-2 and TLR-4 signaling through dramatic cytoskeleton reorganization and redistribution of TLR-2 and TLR-4 at the macrophage cells surface.

BMDMs were treated with or without LPSs (1 μg/ml) for 30 min and then lysed with 1% Triton X-100 in a buffer consisting of 10 mM Tris-HCl pH 7.4, 150 mM NaCl, and 1 mM EDTA pH 8.0. TLR-4 (bdbiosciences) was immunoprecipitated via overnight incubation of the total protein with the anti-TLR-2 antibody (bdbiosciences) followed by incubation with protein ASepharose beads (Roche). The immunoprecipitated pellets were washed and analyzed via immunoblotting on 6% polyacrylamide gels using anti-TLR-2 and anti-TLR-4 antibodies. The detection of TLR-2 from the input sample was performed using 50 μg of protein. The immunoblots were visualized using an LAS 4000 camera system (GE Healthcare) or an Amersham Biosciences revelator. In some experiments, macrophages were treated with 1 μg/ml of cytochalasin D (Sigma–Aldrich) as previously described (Meconi et al., 1998; Honstettre et al., 2004).

The results are expressed as means ± SD and were analyzed using the non-parametric Mann–Whitney U-test. Differences were considered significant at p < 0.05.

We are grateful to L. Alexopoulou (CIML, Marseille, France) for providing the TLR4 knockout mice. This work was supported by the CNRS (PICS 2012-2014 to Eric Ghigo) and by a PQR Campagnia FSE 2007-2013 (Project CREME). Nicolas Boucherit is a fellow of the French Ministry for Research and Technology. Filippo Conti is a fellow of the Scientific Cooperation Foundation “Infectiopole Sud.” Veronica Baldassarre is a fellow of the ERASMUS programme. The funding sources had no role in the study design, data collection and analysis, decision to publish, or manuscript preparation.

Copyright © 2015 Conti, Boucherit, Baldassarre, Trouplin, Toman, Mottola, Mege and Ghigo. This is an open-access article distributed under the terms of the Creative Commons Attribution License (CC BY). The use, distribution or reproduction in other forums is permitted, provided the original author(s) or licensor are credited and that the original publication in this journal is cited, in accordance with accepted academic practice. No use, distribution or reproduction is permitted which does not comply with these terms.

†These author have contributed equally to this work.