Hypervirulent and multidrug resistant Klebsiella pneumoniae strains pose a significant threat to the public health. In the present study, 21 carbapenem-resistant K. pneumoniae isolates (CRKP) were determined by the string test as hypermucoviscous K. pneumoniae (HMKP), with the prevalence of 15.0% (21/140) among CRKP, and 1.1% (21/1838) among all K. pneumoniae isolates. Among them, 7 (33.3%), and 1 (4.76%) isolate belonged to capsular serotype K20 and K2 respectively, while 13 (61.9%, 13/21) weren't successfully typed by capsular serotyping. All the 21 isolates were carbapenemase-producers and were positive for blaKPC-2. In addition to blaKPC-2, all the 21 isolates except one harbor blaSHV-11, and 15 carry extended-spectrum β-lactamase gene blaCTX-M-65. The virulence-associated genes with more than 90% of positive rates among 21 isolates included ureA (100%, 21/21), wabG (100%, 21/21), fimH (95.2%, 20/21), entB (95.2%, 20/21), ycf (95.2%, 20/21), ybtS (95.2%, 20/21), and iutA (90.5%, 19/21). rmpA and aerobactin were found in 57.1% (12/21) isolates. Five sequence types (STs) were identified by multilocus sequence typing (MLST), including ST11 (11 K-non capsule typable and 5 K20 isolates), ST268 (1 K20 isolate and 1 K-non capsule typable isolate), ST65 (1 K2 isolate), ST692 (1 K-non capsule typable isolate), and ST595, a novel sequence type (1 K-non capsule typable isolate). Pulsed-field gel electrophoresis (PFGE) results showed two major PFGE clusters, of which cluster A accounts for 6 ST11 isolates (28.6%) and cluster B includes 8 ST11 isolates (38.1%, 8/21). Ten and six ST11 isolates were isolated from 2014 and 2015, respectively, while 8 were isolated from the same month of December in 2014. Ten isolates were collected from the intensive care unit (ICU), and all except one belonged to ST11. Additional 4 ST11 isolates were collected from patients in non-ICU wards, who had more than 10 days of ICU stay history in 2014 prior to transfer to their current wards where the isolates were recovered. Taken together, the present study showed a hospital outbreak and dissemination of ST11 HMKP with carbapenem resistance caused by KPC-2. Effective surveillance and strict infection control strategies should be implemented to prevent outbreak by HMKP with carbapenem resistance in hospitals.

From January 2013 to December 2015, a total of 1838 K. pneumoniae isolates were consecutively collected from various specimens of patients at the first Affiliated Hospital of Wenzhou Medical University located in Wenzhou, eastern China. These isolates were identified as K. pneumoniae by Gram-staining and a VITEK-2 automated microbiology analyzer (bioMérieux, Marcy l'Etoile, France). The control strains, including Staphylococcus aureus ATCC25923, Escherichia coli ATCC25922, and Pseudomonas aeruginosa ATCC27853, were used for control for the species identification. Patient information were extracted from the medical records. This study was approved by the ethical committee of the first Affiliated Hospital of Wenzhou Medical University. Informed consents were obtained from the patients involved in current study.

Detection of ESBLs and KPC Enzymes

A modified Hodge test was performed to detect carbapenemases, as described previously (CLSI, 2016). All the isolates were tested for ESBL production by the CLSI-recommended confirmatory double-disc combination test (CLSI, 2016). Escherichia coli ATCC 25922 as an indicator bacteria, with sterile saline to E. coli ATCC 25922 suspension was adjusted to 0.5 mihms turbidity, and then diluted 10 times with saline. The diluted E. coli ATCC 25922 bacterial solution was evenly coated on an MH agar plate and the plate was dried for 3–10 min. Imipenem tablets (10 μg/tablet) was placed in the center of the MH agar plate. Using the 1 μl inoculation ring to pick the test strain or quality control strains to the center of the plate of drug sensitive paper as a starting point, along the centrifugal direction of the line, length 20–25 mm. The plate was incubated at 35°C for 16–20 h.

String test was used to detect hypermucoviscosity phenotype as described previously (Shon et al., 2013). The K. pneumoniae isolates with positive hypermucoviscosity phenotypes were designated as HMKP. Briefly, an inoculation loop or needle was used to stretch the bacterial colonies of K. pneumoniae isolate on Columbia blood agar plate (BIO-KONT, Wenzhou, China) from overnight culture. The formation of viscous string with >5 mm in length was considered to be positive for the string test.

Capsular Serotyping and Detection of Resistance Genes and Virulence-Associated Genes 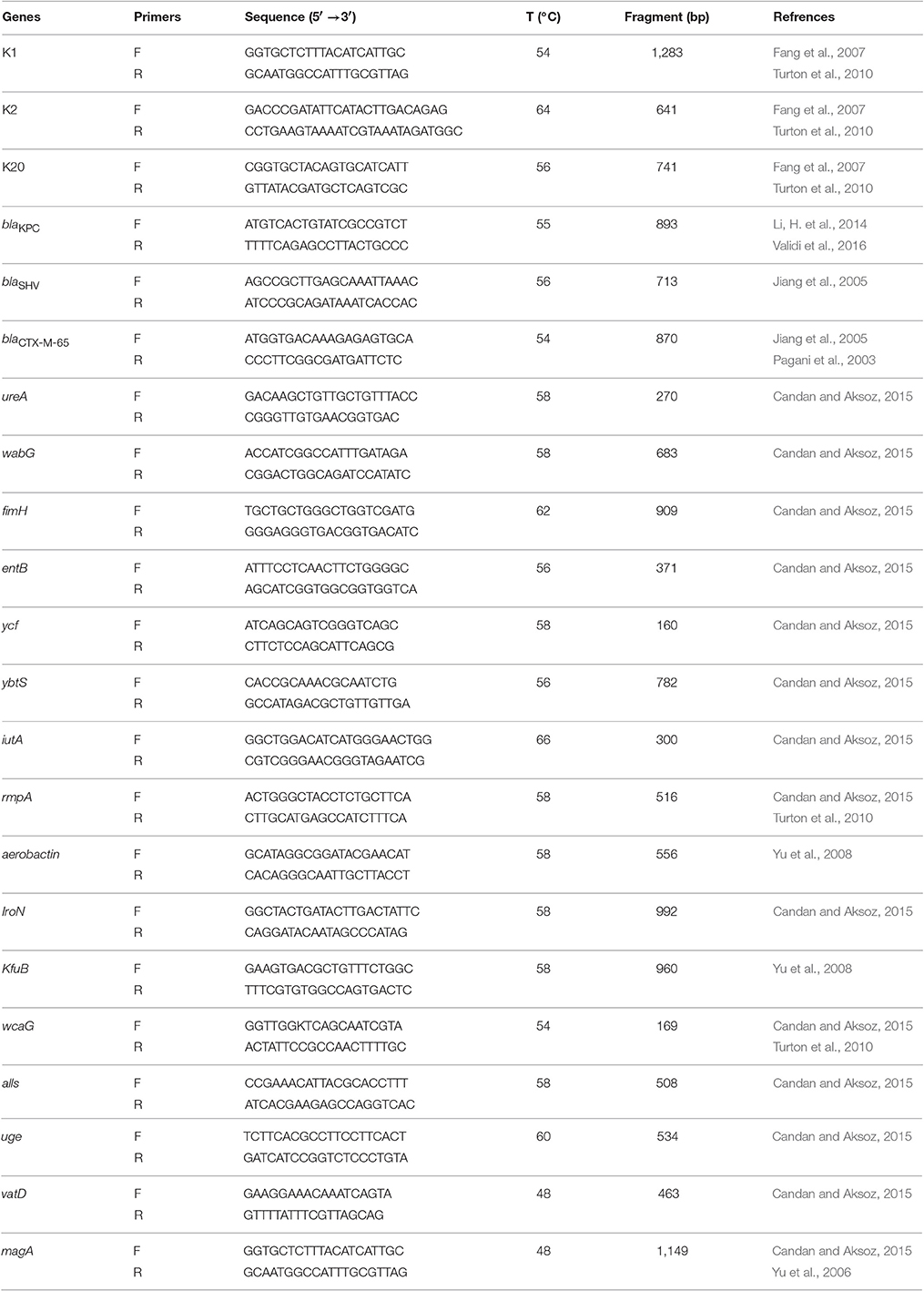 Table 1. The sequences of primers for capsular serotyping, resistance genes and virulence-associated genes.

PFGE was performed on all carbapenem-resistant HMKP isolates. In brief, genomic DNA was prepared by embedding K. pneumoniae cells in agarose plugs, followed by XbaI digestion for 12 h at 37°C. Electrophoresis was performed at 14°C for 20 h using the Bio-Rad CHEF III system (120° angle, 6V/cm, switch times of 6 and 36 s). Salmonella serotype Braenderup strain H9812 was used as the molecular marker, and DNA bands were stained with ethidium bromide (0.5 μg/mL). DNA band profiles were interpreted by the criteria of Tenover et al. (1995). Analysis of the PFGE patterns was performed with Bionumerics software (Applied Maths, Sint-Martens-Latem, Belgium) using the Dice Similarity coefficient. The isolates sharing more than 80% similarity were defined as the same PFGE cluster. 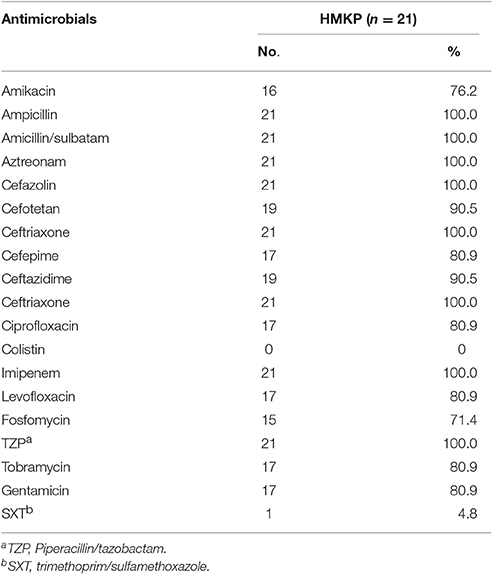 All 21 HMKP isolates with carbapenem resistance were found to be carbapenemase-producers determined by modified Hodge test. In accordance with the phenotypic results, all isolates were positive for blaKPC-2.In addition to blaKPC-2, all except one isolates harbored blaSHV-11, and 15 (71.4%) harbored extended-spectrum β-lactamase gene blaCTX-M-65.

Clinical characteristics of 21 patients infected by carbapenem-resistant HMKP were summarized in Table 3. Among them, 9 were female and 12 were male, with age ranging from 22 to 82 years old. They were from 8 wards including intensive care unit (ICU) (10 cases), neurology ICU (2 cases), gastrointestinal surgery ward (2 cases), traumatology ward (2 case) and other four 4 wards (one case each). However, 4 patients from non-ICU wards had 10–40 days ICU stay history before transfer to their current wards. Fourteen isolates were collected from sputum samples of cases who had pneumonia. Hyperglycaemia was found among 9 cases (42.9%, 9/21). Thirteen cases (61.9%, 13/21) had been treated by carbapenems (imipenem, meropenem or panipenem), and 11 cases (52.4%, 11/21) had surgery. Mechanical ventilation was performed on 15 patients (71.4%, 15/21), and various drainage systems were installed in 14 patients (66.7%, 14/21). 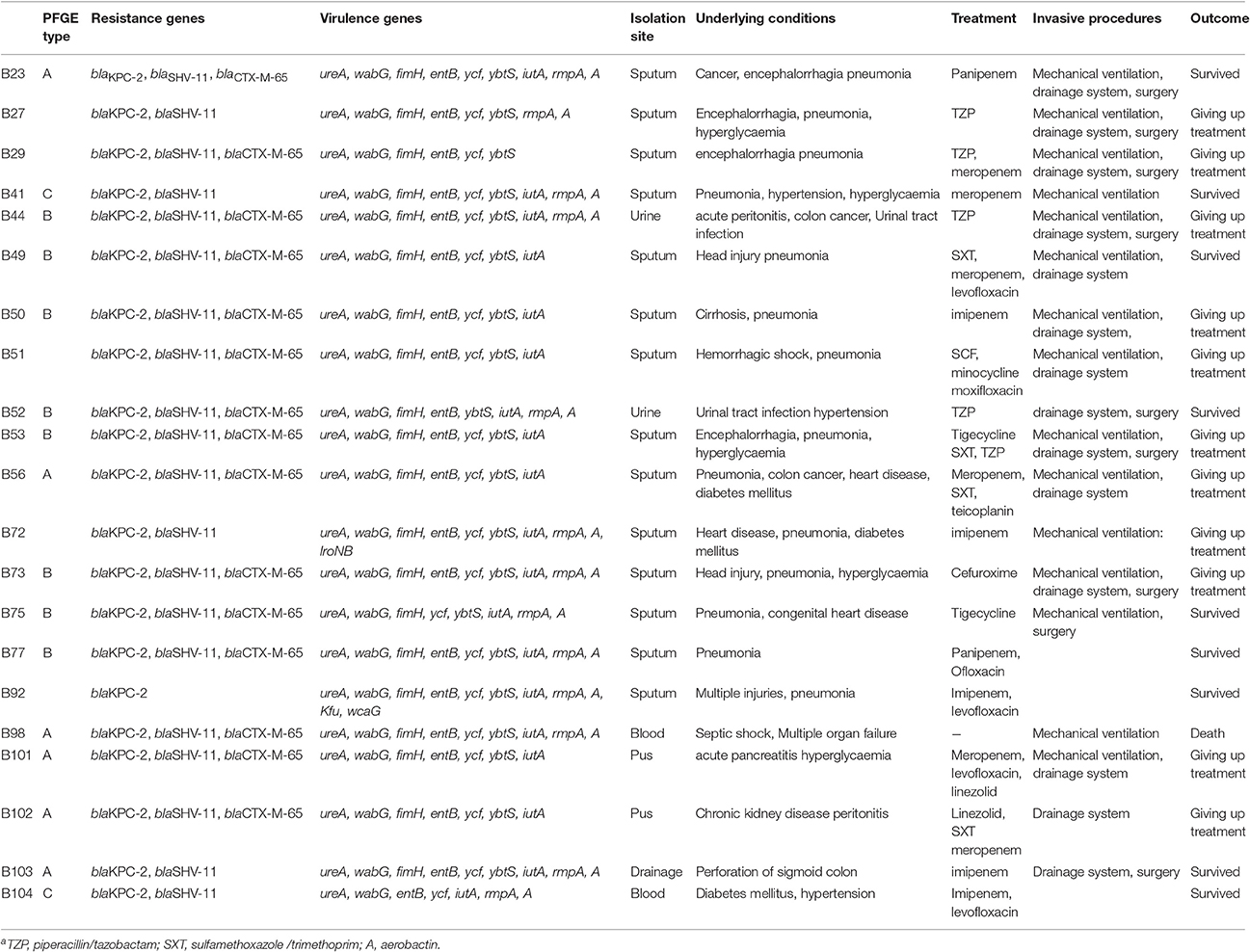 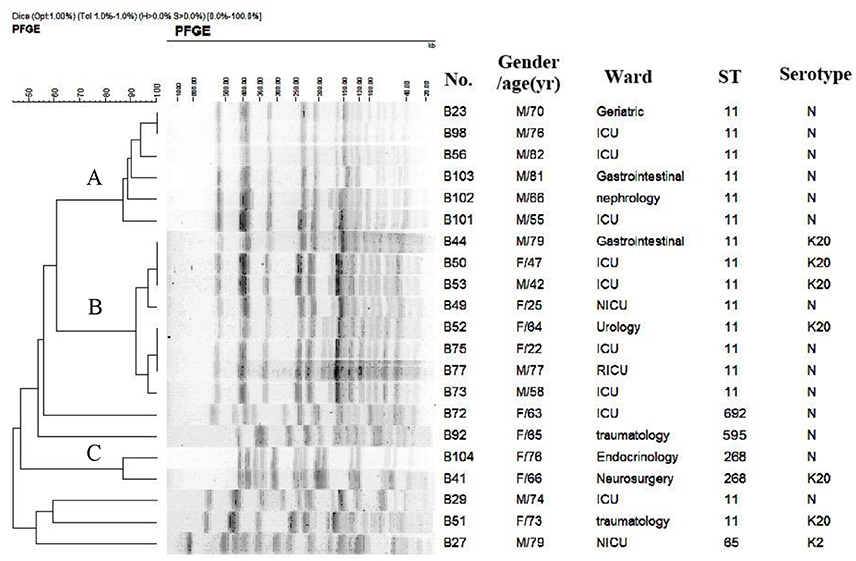 HMKP has been frequently described in several Chinese hospitals, however, carbapenem-resistant HMKP was rarely found in many previous reports (Li, W. et al., 2014; Liu et al., 2014; Zhang et al., 2016). Here we described the prevalence of HMKP among CRKP in a large tertiary hospital in China, and genetically and phenotypically characterized the carbapenem-resistant HMKP isolates. In this study, the prevalence of HMKP among CRKP isolates is higher than that of 7.4% from two hospitals in Zhejiang Province in China in 2013 (Zhang, R. et al., 2015), but it is similar to the prevalence of 17.9% (5/28) from an another previous report in China (Zhang, Y. et al., 2015). Our study and other reports suggested that acquiring high virulence and carbapenem resistance in K. pneumoniae is increasingly becoming a concern in the hospitals in China.

Previous studies showed that there was a correlation between the presence of rmpA gene and virulence in terms of abscess formation of HMKP isolates (Yu et al., 2006; Yang et al., 2014; Yan et al., 2016; Zhang et al., 2016). A Chinese report described that rmpA was found in all K. pneumoniae isolates causing PLA (Qu et al., 2015). In the present study, 57.1% (12/21) of the carbapenem-resistant HMKP isolates harbored rmpA. Meanwhile, previous studies reported that magA was associated with the hypermucoviscosity phenotype of K. pneumoniae, which was characteristic of the K1 capsular operon (Fang et al., 2004, 2005; Chuang et al., 2006). Yu et al. reported that there was a strong association between kfuB and alls and K1 isolates, with all K1 isolates positive for kfuB and alls, and all K2 isolates negative for these two genes (Yu et al., 2008). In this study, all carbapenem-resistant HMKP isolates were negative for magA, alls, and kfuB, which is consistent with the result that no K1 capsular serotype was identified among the HMKP isolates. aerobactin is an important virulence determinant for HMKP, and it has been used as a marker for the identification of HMKP (Zhang et al., 2016). 57.1% (12/21) of the carbapenem-resistant HMKP isolates were found to carry aerobactin in the present study, while iorN and wcaG were only found in one isolate each.

ST11 is the predominant clone of KPC-producing K. pneumoniae isolates in China (Qi et al., 2011). However, this epidemic clone was rarely found in HMKP isolates (Liu et al., 2014; Zhang et al., 2016). Zhang et al. reported that ST11 was found in 3 carbapenem-resistant HMKP isolates with unidentified K types (Zhang, Y. et al., 2015). In the present study, ST11 was found to be the most common clone (76.2%, 16/21). Similar to the previous report (Zhang, Y. et al., 2015), 11 out of 16 ST11 isolates were nontypable by the capsular serotyping. However, 5 ST11 isolates belonged to K20, which was firstly reported in current study. Epidemic ST11 strains have been associated with multidrug-resistance and now become hypermucoviscous, which may make the treatment and control for K. pneumoniae infections more difficult and poses a major clinical problem for the future. ST23 was the most commonly described ST among HMKP isolates, and was strongly correlated with capsular serotype K1 and liver abscess in several previous studies (Turton et al., 2007; Chung et al., 2008; Shon et al., 2013). A report from China showed that among 5 KPC-2-producing HMKP with K1 serotype, 2 belong to ST23, and 3 belonged to ST1797 (Zhang, R. et al., 2015). In this study, ST23 was not identified, which is consistent with the finding of absence of K1 serotype. Previous studies showed that ST268 was only found among K20 isolates (Liu et al., 2014; Lin et al., 2015; Yan et al., 2015, 2016; Zhang et al., 2016). Similarly, 1 ST268 isolate was found to carry K20 serotype in the present study. In this study, one K2 strain belonged to ST65, which is in accordance with previous study that ST65 was the most common ST associated with K2 serotype in K. pneumoniae (Liao et al., 2014). Although, ST692, a two-locus variant of ST65, has been deposited in the K. pneumoniae MLST database, it is not reported in published literatures. Our study is the first report of ST692 K. pneumoniae with carbapenem resistance associated with clinical infection.

Among 16 ST 11 isolates, the first and second isolates were emerged in January and June, 2014 in our hospital, while 8 (50%) were identified in December, 2014. In 2015, 6 ST11 isolates were identified, and the last isolate was found in October. All 10 except one (ST692) isolates from ICU belonged to ST11. Although, other 4 ST11 isolates were collected from patients in non-ICU wards, they had more than 10 days of ICU stay history in 2014 prior to transfer to their current wards where the isolates were recovered. We suspected that the 4 patients may be initially infected by ST11 carbapenem-resistant HMKP during their stay in ICU, followed by transfer to other wards. The remaining three ST11 isolates were found in neurology ICU (NICU), respiratory ICU (RICU) and nephrology ward. Our data indicated that there was an outbreak of ST11 HMKP with carbapenem resistance in the ICU of our hospital between 2014 and 2015.

This work was supported in part by National Institutes of Health (NIH) Grant R01AI090155 (to BK) and R21AI117338 (to LC). The content is solely the responsibility of the authors and does not necessarily represent the official views of the NIH.

We thank Zhejiang Provincial Program for the Cultivation of High-level Innovative Health talents to FY.

Copyright © 2017 Zhan, Wang, Guo, Jin, Duan, Hao, Lv, Qi, Hu, Chen, Kreiswirth, Zhang, Pan, Wang and Yu. This is an open-access article distributed under the terms of the Creative Commons Attribution License (CC BY). The use, distribution or reproduction in other forums is permitted, provided the original author(s) or licensor are credited and that the original publication in this journal is cited, in accordance with accepted academic practice. No use, distribution or reproduction is permitted which does not comply with these terms.