Heart rate variability (HRV) refers to the continuous oscillation of RR intervals (RRIs) around its mean value. Power spectrum analysis of heart rate (HR) fluctuations provides a quantitative and non-invasive means to assess the sympathetic and vagal modulations of HR (1, 2). The imbalance in the two branches of autonomic nervous modulation may contribute to and reflect many kinds of illness. HRV analysis has long been used in the assessment of many diseases such as acute myocardial infarction (AMI) (3, 4), post-myocardial infarction status (5), and orthotopic heart transplantation (6).

The HR is influenced by the complex interplay of neural, humoral, and electrophysiological factors, which in turn are modulated by central and peripheral oscillators (7). To evaluate the complexity of the controlling system of HR, the power-law characteristics of power spectral density (PSD) can be obtained by plotting the logarithm of PSD against the logarithm of frequency (Frq) to obtain a linear regression line (8–16). The existence of the linear regression line indicates that the relationship between PSD and Frq in the power spectrum of HRV can be described by a power-law function. The power-law relationship of HRV has been used as a predictor of mortality in the elderly (9), and the analysis of the fractal characteristics of short-term RRI dynamics can yield more powerful prognostic information than the traditional HRV measures among patients with depressed left ventricular function after AMI (10), patients with Chaga’s disease (15), and pediatric patients with multiple organ failure (16).

Since power-law relationship between PSD and Frq is an important ingredient of HRV spectrum, it is possible to decompose mathematically the HRV spectrum into a power-law relationship between PSD and Frq and a remaining part. Thus, the aims of this study were to decompose the PSD of traditional HRV into a power-law function and a residual HRV (rHRV) and to compare the rHRV measures with their corresponding HRV measures in healthy adults.

The healthy subjects were volunteers recruited from the community. The subjects included in this study did not have known cardiopulmonary or other systemic disease, which may influence HRV. This research has been approved by the Ethics Committee of the Taipei Veterans General Hospital. Informed consent was obtained from each subject before the study.

Sixty healthy subjects recruited from the community participated in this study. The general characteristics of these healthy subjects are shown in Table 1. The study subject was requested to not take caffeinated or alcoholic beverages 24 h prior to the study. After 5 min rest in sitting position, a trend of electrocardiogram (ECG) signals was picked up by a multichannel recorder (Biopac MP150 with 16 channels, BIOPAC Systems, Inc., Goleta, CA, USA) from conventional lead II on each subject. The analog signals of ECG were transformed into digital signals by using an analog-to-digital converter with a sampling rate of 500 Hz. The ECG signals were recorded for 10 min, so that at least 512 inter-beat intervals (RRIs) can be obtained for HRV analysis. All procedures were performed in the afternoon in a bright and quiet room with a room temperature of 24–25°C and humidity of 54–55%.

Table 1. General characteristics and the slope and Y-intercept of linear regression of HRV spectra of the study subjects (n = 60).

The method of HRV analysis has been reported previously (17). In brief, the recorded ECG signals were retrieved to measure the consecutive RRIs, which are the time intervals between successive pairs of QRS complexes, by using the software for the detection of R wave. The atrial or ventricular arrhythmia was deleted before HRV analysis. If the percentage of deletion was >5%, then the data of the patient were excluded from HRV analysis. The last 512 stationary RRI were used for HRV analysis.

The fast Fourier transform (FFT) of Cooley and Tukey expresses the discrete Fourier transform (DFT) of an array of size N recursively in terms of two DFTs of size N/2 to reduce the overall runtime of computations (18). The basis of the binary form of FFT is the Danielson–Lanczos lemma, which breaks each term in the array again and again into even and odd terms until the samples are exhausted (19). Thus, a binary form of FFT requires the number of points N in the array to be a power of 2, or N = 2r, where r is an integer. In this study, we chose N = 29 = 512 stationary RRI for HRV analysis, so that the time required for ECG recording could be <10 min in general.

The mean, SD (SDRR), coefficient of variation (CVRR), and rMSSD of 512 RRI were calculated using standard formula. The power spectra of the 512 RRI were obtained by means of fast Fourier transformation (Mathcad 15.0, Mathsoft Inc., Cambridge, MA, USA). Direct current component was excluded before the calculation of the powers. The area under the curve of the spectral peaks within the Frq range of 0.01–0.4, 0.01–0.04, 0.04–0.15, and 0.15–0.40 Hz were defined as the total power (TP), very low-frequency power (VLFP), low-frequency power (LFP), and high-frequency power (HFP), respectively.

In the study by Huikuri et al. (9), the power-law scaling of the power spectra (exponent β) from 24-h Holter recordings was calculated from the Frq range of 0.0001–0.01 Hz. This Frq range did not cover the spectral peaks in the very low-frequency (VLF), low-frequency (LF), and high-frequency (HF) ranges. To facilitate the decomposition of the whole HRV spectrum, the power-law relationship of HRV was calculated by plotting log(PSD) against log(Frq) within the Frq range from >0 Hz to the Nyquist Frq in this study. The 0 Hz point must be excluded because log(0) is not defined mathematically.

In this way, the PSD can be decomposed into two parts, the PSDrg and the rPSD. The following simple equation depicts the relationship among PSD, PSDrg, and rPSD:

The Wilcoxon signed-rank test (SigmaStat statistical software, SPSS Inc., Chicago, IL, USA) was employed to compare the traditional HRV measures with the corresponding rHRV measures. Linear regression analysis was used to find the relations between the clinical characteristics and the measures of HRV and rHRV. All data are presented as median (25–75%). A P < 0.05 was considered statistically significant. 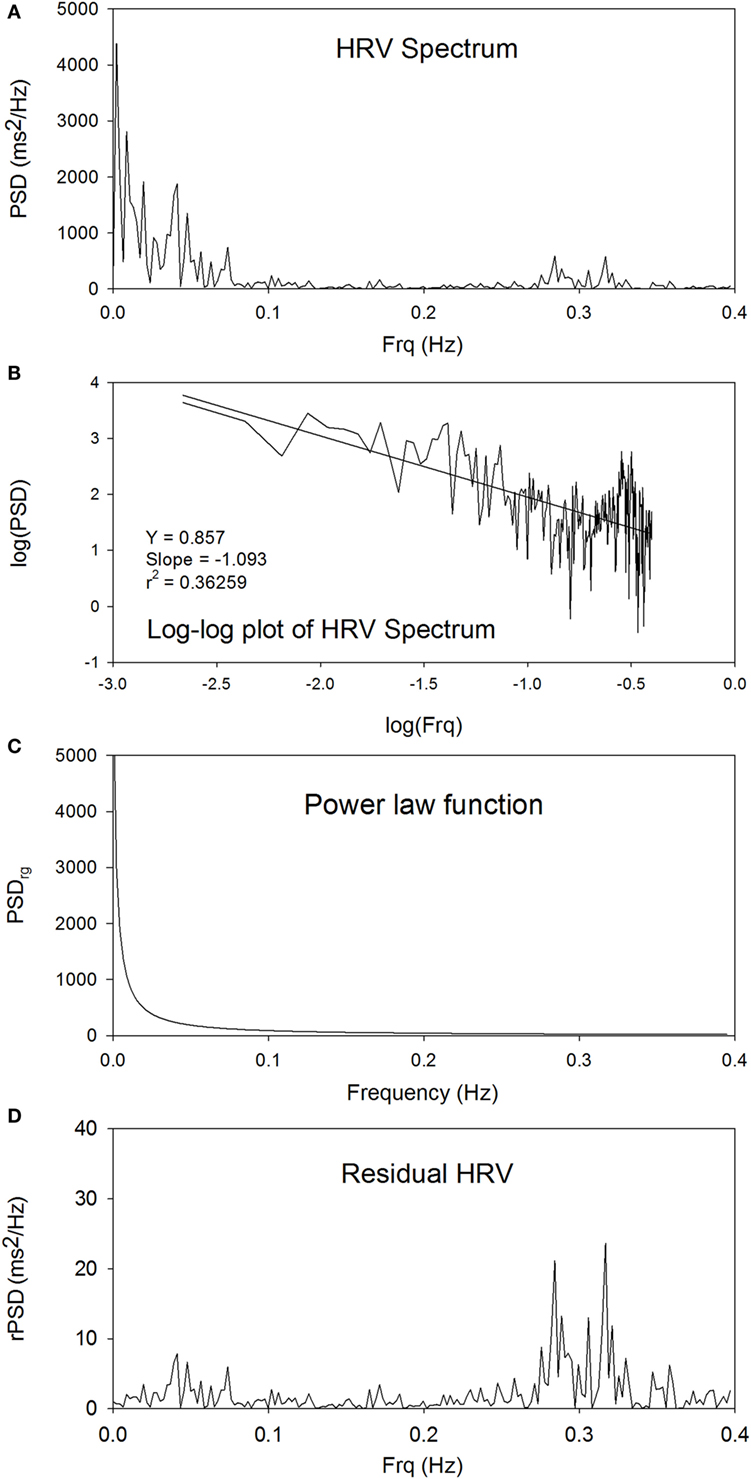 Figure 1. The power spectrum of traditional HRV (A), the linear plot of log(PSD) versus log(Frq) (B), the power-law function between PSDrg and frequency in the linear plot (C), and the plot of rPSD (D). 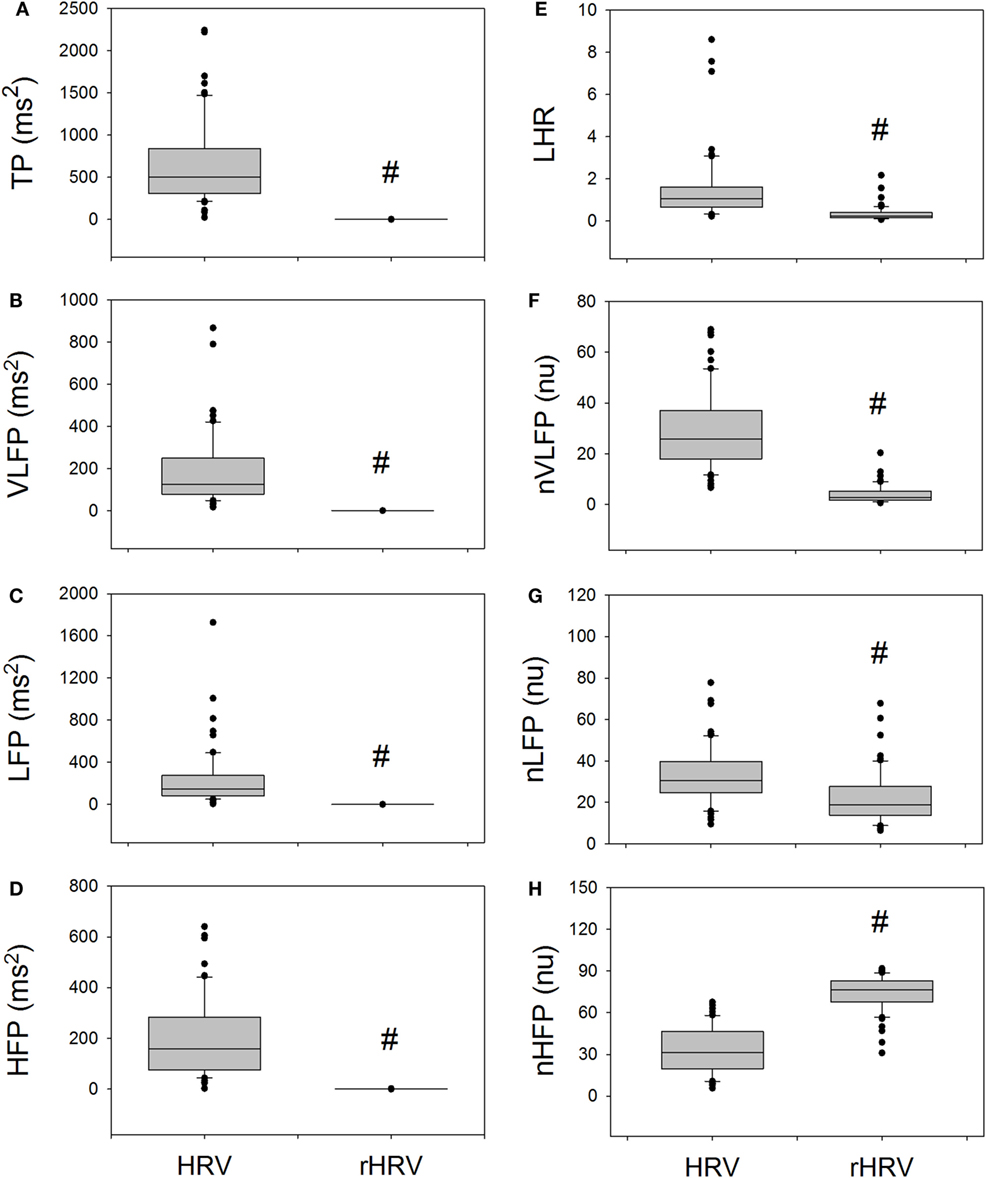 Figure 3. The dependence of traditional HRV measures and rHRV measures on the slope of linear regression or the exponent of power-law function. 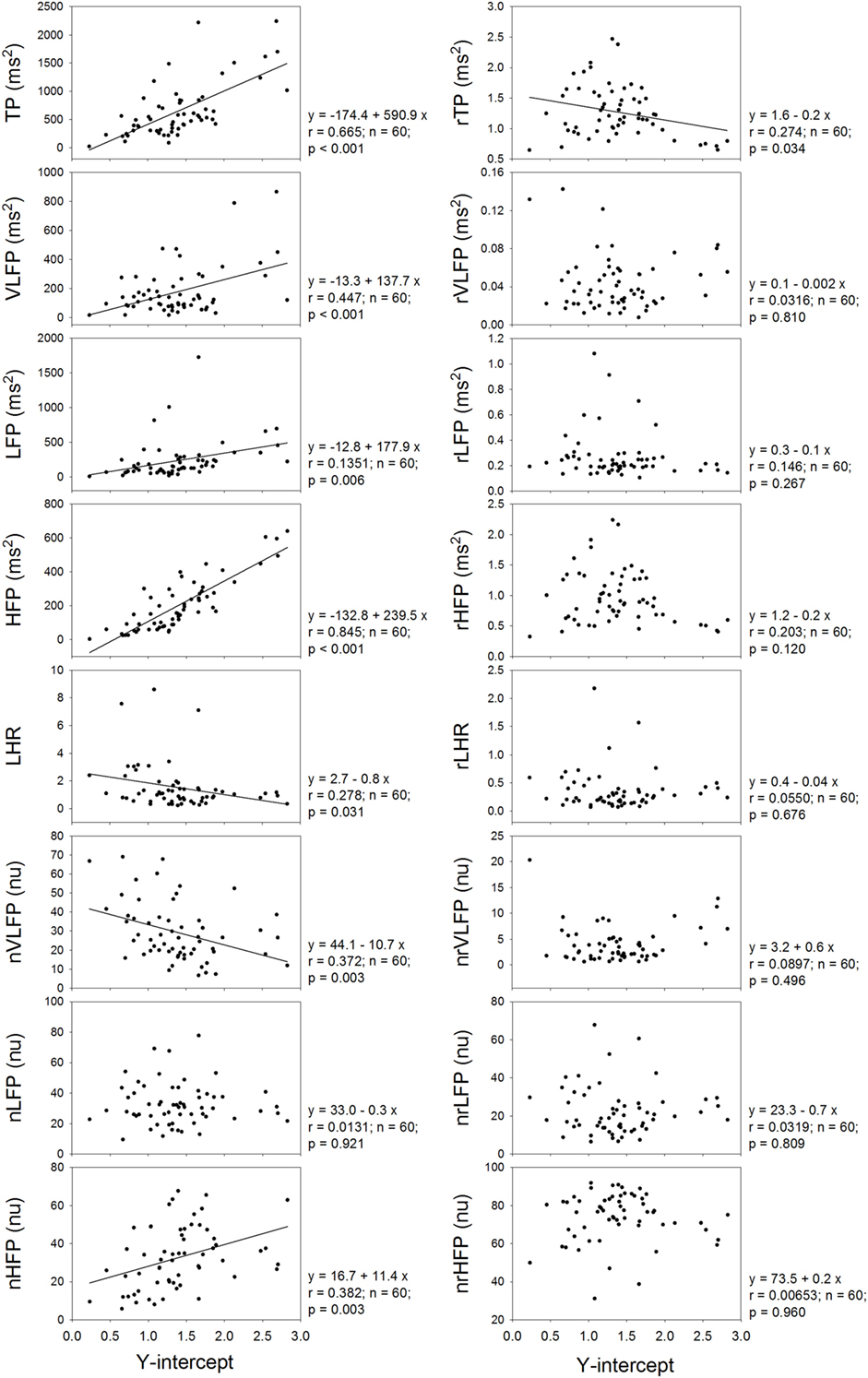 Figure 4. The dependence of traditional HRV measures and rHRV measures on the Y-intercept of linear regression.

It is already known that the HRV measures depend on the age of the subjects. Therefore, it is necessary to inquire whether or not the rHRV measures still depend on the age of the subjects. Figure 5 shows that the TP, LFP, HFP, nVLFP, and nLFP of traditional HRV depend on age. In the rHRV, the age still correlates significantly with the rVLFP, rLFP, and nrVLFP; however, the rTP, rHFP, nrHFP, and rLHR do not depend on age. The non-dependence of rTP, rHFP, nrHFP, and rLHR on age may make them more suitable for the study of age-independent autonomic nervous modulation of the subjects. 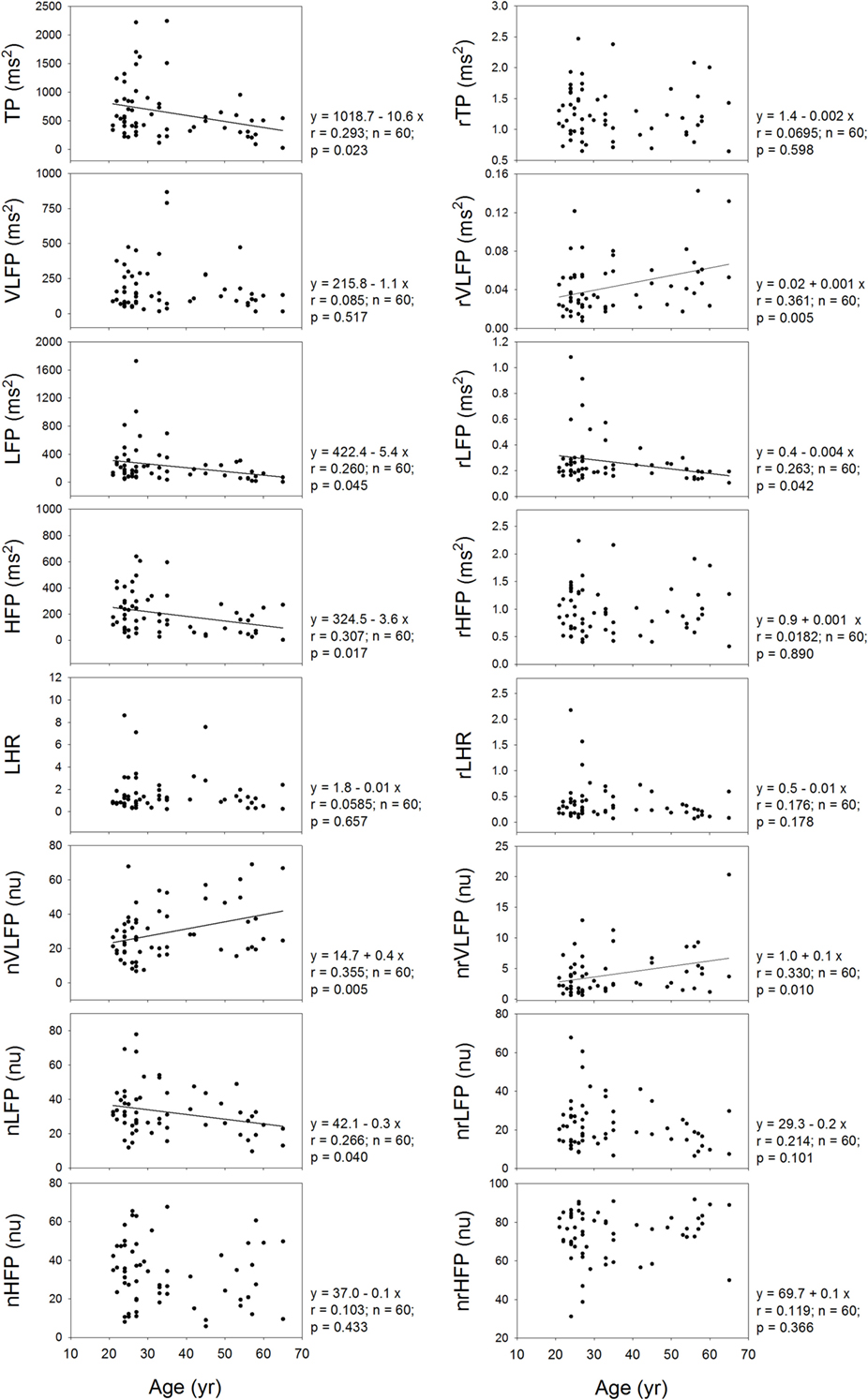 Figure 5. The dependence of traditional HRV measures and rHRV measures on the age of the subjects.

It is well known that the HF components of HRV do not fit the power-law profile. This is illustrated in Figure 1. On this basis, there is no surprise in finding the important residual power in the HF band after the removal of the 1/f component. In addition, it is not surprising to find an enhanced nrHFP in the rHRV because the powers of residual lower Frq components are reduced after the decomposition.

The rHRV is obtained by removing the power-law function. It can be expected that the magnitude and clinical significance of rHRV measures are different from their corresponding HRV measures. For instance, the rTP, rVLFP, rLFP, rHFP, nrVLFP, nrLFP, and rLHR are all significantly smaller than their corresponding HRV measures, whereas only the nrHFP is significantly greater than the nHFP. In addition, the dependences of TP, HFP, and nLFP on age in the HRV no longer exist in the rHRV, because the rTP, rHFP, and nrLFP do not depend on age. The dependence of TP, HFP, and nLFP on age might come from the Y-intercept because the Y-intercept has significant and positive correlations with the TP, VLFP, LFP, HFP, and nHFP and has significant and negative correlations with LHR and nVLFP.

The PSD of traditional HRV can be decomposed into a power-law function displaying the fractal characteristics of the PSD and an rHRV. The decomposition of traditional HRV into a power-law function and an rHRV suggests that the rHRV measures and the exponent and Y-intercept of linear regression must be included in future spectral HRV analysis. The clinical significances of rHRV measures might be different from those of traditional HRV measures. The Y-intercept might be an important HRV measure for clinical use because almost all rHRV measures have no significant correlation with it. The non-dependence of rTP, rHFP, nrHFP, and rLHR on the age of the subjects might make them more suitable for the study of age-independent autonomic nervous modulation of the subjects.

2. Task Force of the European Society of Cardiology and the North American Society of Pacing and Electrophysiology. Heart rate variability: standards of measurement, physiological interpretation and clinical use. Circulation (1996) 93:1043–65. doi:10.1161/01.CIR.93.5.1043

Copyright: © 2016 Kuo and Kuo. This is an open-access article distributed under the terms of the Creative Commons Attribution License (CC BY). The use, distribution or reproduction in other forums is permitted, provided the original author(s) or licensor are credited and that the original publication in this journal is cited, in accordance with accepted academic practice. No use, distribution or reproduction is permitted which does not comply with these terms.