Dilated cardiomyopathy (DCM) is defined as the dilatation and dysfunction of one or both ventricles in the absence of abnormal loading or coronary heart disease (CHD) (1, 2). This disease can occur in all age groups but is more common in young adults. The incidence rate in men is higher than that in women (3). With progression of the disease, it can lead to various complications, such as heart failure, shock, arrhythmia, and even sudden death (4). Accurate assessment of left ventricular function in DCM patients is extremely important for clinical diagnosis, treatment, and prognosis (5).

Cardiac magnetic resonance imaging (CMRI) is the gold standard for the measurement of cardiac function parameters (6, 7). In addition, the application of late gadolinium enhancement (LGE) is currently the most reliable method for non-invasive detection of localized myocardial fibrosis, which is helpful for the diagnosis of DCM and significantly related to its prognosis (8, 9). However, CMRI takes longer and is expensive, it is difficult to be used as a routine examination in clinical practice.

The left ventricular ejection fraction (LVEF) and global longitudinal strain (GLS) measured using echocardiography are often recommended for the evaluation of left ventricular systolic function (LVSF) (10). However, LVEF and GLS are susceptible to cardiac load. The myocardial work index derived from the left ventricular pressure-strain loop (LVPSL) is a new method for non-invasive assessment of LVSF (11). This technique is derived from the 2D speckle tracking technique, and it considers the effect of afterload on strain. The method is simple, easy, and non-invasive, and it could be widely used in clinical practice.

We conducted a prospective study on 101 consecutive patients with DCM in the heart failure department of Fuwai Central China Cardiovascular Hospital from January 2019 to February 2021. The diagnosis of DCM was established according to current guidelines (14). The inclusion criteria were: (1) LV ejection fraction (LVEF) ≤ 45% or LV fractional shortening <25%; (2) LV end-diastolic diameter > 117% of predicted values corrected for age and body surface area (BSA), both echo-determined. Patients with coronary heart disease (> 50% angiographical stenosis in any epicardial coronary artery, and patients with an ischemic scar at cardiac MRI), hypertensive heart disease, significant valvular disease (valvular stenosis or > mild functional regurgitation), chronic alcohol ingestion, pulmonary heart disease, congenital heart disease, a history of cardiac resynchronisation therapy (CRT) and implantable cardioverter defibrillator (ICD) implantation, or irregular rhythm were excluded. The 41 patients who had not undergone a CMRI were excluded. Finally, 3 patients were excluded from this study because of poor image quality. The final analysis included 57 DCM patients (Figure 1). 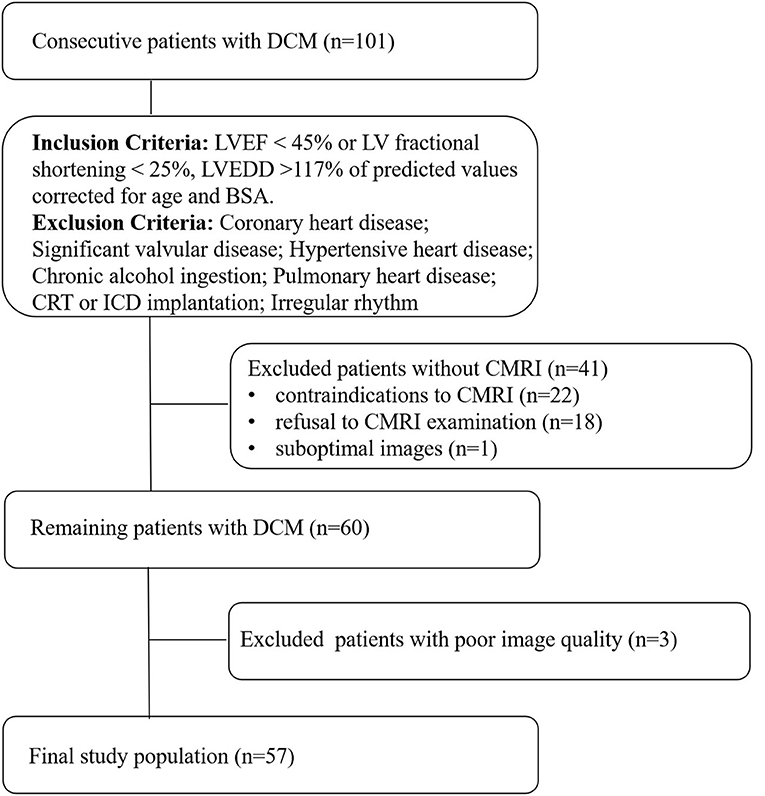 All echocardiographic examinations were performed on a Vivid E95 ultrasound system (GE Vingmed Ultrasound AS, Horten, Norway) equipped with an M5Sc-D 1.4–4.6 MHz transducer. All the study subjects were placed in a left-side position and synchronously connected to the electrocardiogram. The average frame rate of the 2D image was 59 ± 7 frames/sec. The LVEF of each patient was measured using the biplane Simpson method. The peak velocity of the mitral valve in early diastolic period (E peak), and the average velocity of the mitral annulus (e′) were measured, and E/e′ was calculated. Apical four-, three-, and two-chamber images were continuously acquired for at least three cardiac cycles, and the Doppler blood flow spectrum of the aortic and mitral valves was obtained. The original data images were saved to a hard disk for analysis.

Echopac version 203 (GE Vingmed Ultrasound AS, Horten, Norway) was used for image analysis. According to the Doppler flow spectrum of the aortic valve and mitral valve, valvular event time was determined. Tracking was automatic, but if the tracking was not satisfactory, tracking points were adjusted manually to determine segmental and global longitudinal strain. After entering the cuff blood pressure value, the software automatically generated the LVPSL curve, GLS, and myocardial work parameters. The absolute value of GLS was recorded and the global myocardial work parameters included global work index (GWI), global constructive work (GCW), global wasted work (GWW), and global work efficiency (GWE). GWI is equivalent to the area of the PSL, GCW is a sign of active contraction of the left ventricular myocardium, GWW is a sign of energy loss, and GWE is the percentage of GCW in the sum of GCW and GWW (Figure 2). 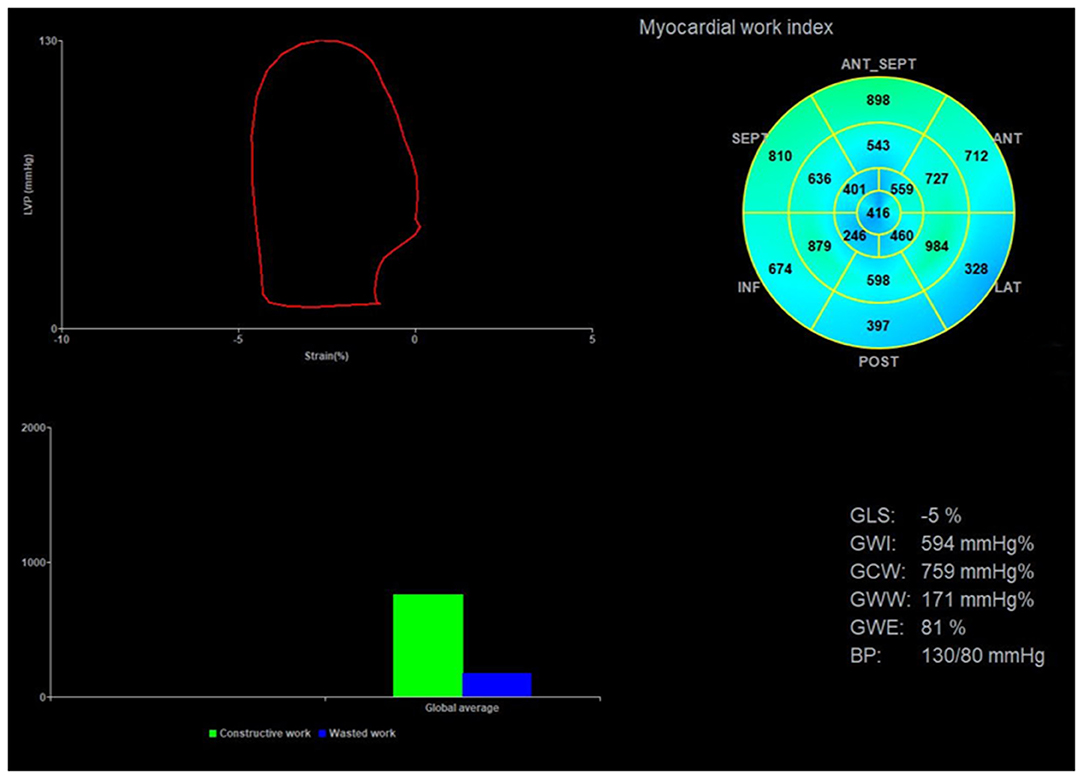 LVEDV, LVESV, and LVM were corrected as indices using BSA.

In accordance with the recommendation of the American Heart Association in 2002 (15), the left ventricular myocardium was divided into 17 segments, and the presence and distribution of LGE were evaluated using short-axis images. LGE (+) was defined as the myocardial signal at the LGE enhancement site higher than the 5SD threshold of the average signal intensity of the distal normal myocardium (Figure 3B). According to the CMRI data, the studied population was divided into two groups: patients without LGE (LGE-) and patients with LGE (LGE+).

Blood samples of patients were drawn to measure the level of N-terminal pro-brain natriuretic peptide (NT-proBNP). Analysis was conducted in the clinical laboratory.

Continuous variables were expressed by mean ± standard deviation when the variables obeyed normal distribution; otherwise, the median (quartile) was used. Categorical variables are presented as number (%). Baseline characteristics among patients with and without LGE were compared by chi-square or Fisher's exact test (categorical variables), and independent sample t-test or Wilcoxon signed rank test (continuous variables) as appropriate. To investigate the associations between variables and LV myocardial fibrosis, univariate and multivariate logistic regression analyses were performed. Correlations between independent variables were examined by Pearson correlation coefficients. For collinearity reasons (Pearson's coefficient > 0.6), several multivariate logistic regression models were built. A value of P < 0.05 was considered statistically significant.

Table 1. Baseline characteristics of the study population and according to presence of LGE.

Table 2. Echocardiography parameters for the overall population and according to presence of LGE.

Table 3. Cardiac magnetic resonance imaging parameters for the overall population and according to presence of LGE. 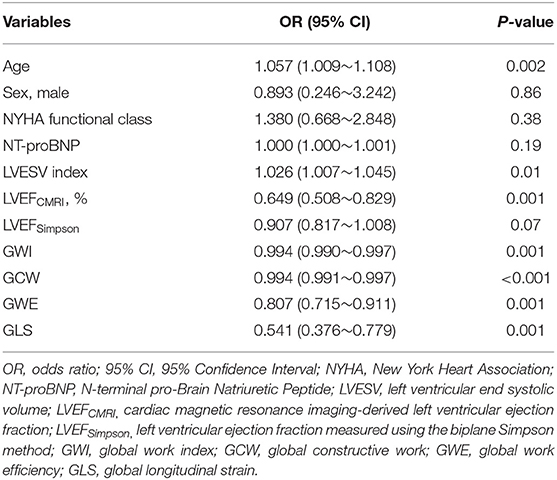 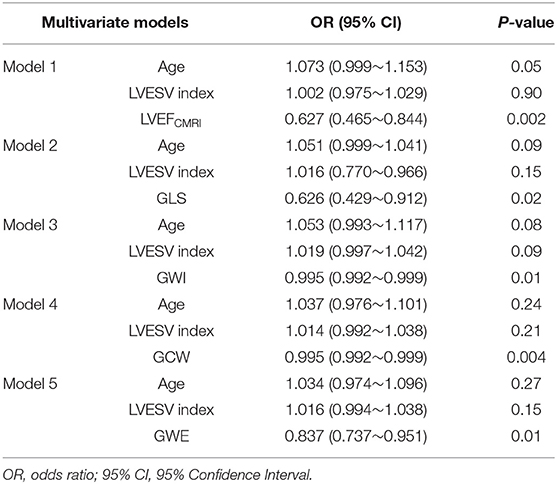 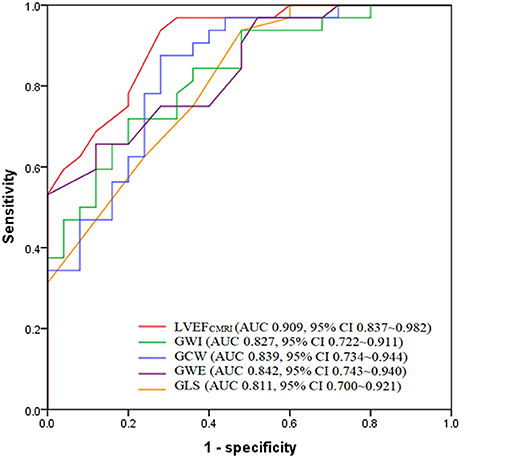 Prognostic Value of Myocardial Fibrosis in Patients With DCM

The association between non-invasive myocardial work indices and LV myocardial fibrosis in patients with DCM has not yet been reported. In our study, we found that global myocardial work indices, including GWI, GCW, GWE, remained significant predictors of LGE in DCM patients, indicating that these parameters may be potential surrogate markers for the detection of fibrosis when CMRI is contraindicated (significant chronic renal disease, incompatible metallic devices, or claustrophobia).

Association Between Myocardial Dysfunction and Myocardial Fibrosis in Patients With DCM

Myocardial fibrosis leads to the decrease in ability of myocardial movement and deformation, manifested as impairment of myocardial global systolic function (4, 5, 20). Myocardial dysfunction is closely related to fibrosis in DCM patients. Previous studies have found that LVEF is significantly negatively correlated with myocardial fibrosis in DCM patients (21), while progressive fibrosis is associated with minimal change in LVEF (19), and GLS in the LGE+ group is lower than that in LGE- group (22). In this study, the LGE+ group presented with reduced GWI, GCW, GWE, GLS, and LVEFCMRI. These findings confirmed the association between myocardial dysfunction and fibrosis.

Wide QRS (duration ≥120 ms) on the ECG represents intraventricular conduction delay. In the study, there was no statistically significant difference in QRS duration between LGE- and LGE+ patients, indicating no significant association between QRS duration and LV myocardial fibrosis. A previous study (24) found that the combination of wide QRS and LGE can provide additional risk stratification compared with LGE status alone in DCM patients.

This study was conducted in a single center with a small number of samples and needs to be expanded for further study. A previous study (25) found that LV midwall LGE showed an excellent predictive value in identifying high-risk DCM patients, but the correlation between the localization of LGE (sub-endocardial, mid-segment, sub-epicardial) and myocardial work parameters in this study were not explored. In addition, the accuracy of myocardial work indices in the evaluation of therapeutic response to medications were not analyzed. Further studies with extended follow-up are needed to verify the results of this study.

The studies involving human participants were reviewed and approved by the ethics committee of Fuwai Central China Cardiovascular Hospital. The patients/participants provided their written informed consent to participate in this study. Written informed consent was obtained from the individual(s) for the publication of any potentially identifiable images or data included in this article.

The Supplementary Material for this article can be found online at: https://www.frontiersin.org/articles/10.3389/fcvm.2021.704251/full#supplementary-material

Copyright © 2021 Cui, Li, Liu, Huang, Hu, Wang, Ma and Liu. This is an open-access article distributed under the terms of the Creative Commons Attribution License (CC BY). The use, distribution or reproduction in other forums is permitted, provided the original author(s) and the copyright owner(s) are credited and that the original publication in this journal is cited, in accordance with accepted academic practice. No use, distribution or reproduction is permitted which does not comply with these terms.