Pulmonary Artery Stump Thrombosis: To Treat or Not to Treat? The Question Is Still Open. Description of a Case and Review of the Literature

Pulmonary artery stump thrombosis (PAST) represents a possible complication after lung surgery. We report the case of a 59-year-old man who presented with dyspnoea about 4 years after right pneumonectomy due to squamous cell lung cancer. A CT-scan showed the presence of pulmonary artery stump thrombosis. Although there was no evidence of pulmonary embolism, given the clinical features and radiological shape of the thrombus, anticoagulation treatment with low-molecular-weight heparin was started with improvement of symptoms. The patient was discharged on anticoagulant treatment and a pulmonary CT-scan performed 4 months later showed an almost complete resolution of the PAST. Pathophysiological mechanisms of PAST are still unknown, although several hypotheses have been proposed. However, the decision to treat PAST with anticoagulants is still controversial. A review of literature will be provided in order to discuss risk factors, possible etiologies and to highlight clinical and radiological characteristics that could suggest to treat this condition, in particular when there is an increased risk of complications.

Pulmonary artery stump thrombosis (PAST) following pulmonary resection for lung cancer is a possible complication after lobectomy (1) or pneumonectomy (2), with an incidence of 12% (2) after this latter. Generally, PAST occurs early after surgery (3); nevertheless, a delayed presentation has been described, although sporadically (4–10). Pathophysiological mechanisms of PAST are not fully understood, although several hypotheses have been formulated, such as endothelial damage during surgery, hypercoagulability and blood flow stasis in the vascular stump. PAST is generally asymptomatic and incidentally detected at follow-up CT-scans; moreover, it is usually harmless (11). However, in a minority of cases, it could be complicated with pulmonary embolism to the contralateral lung (4), pulmonary hypertension (6) and death (8, 12–14). At present, the optimal treatment of PAST is still matter of debate.

Here we describe the late-occurrence of PAST in a patient treated with right pneumonectomy due to squamous cell lung carcinoma. Clinical features, possible causes and risk factors will be reported. Moreover, a review of the literature will be provided in order to discuss gray areas concerning treatment options and the choice to treat this specific case.

In October 2020, a 59-year-old man was admitted to our Internal Medicine inpatients unit because of the persistence for about 2 weeks of dyspnoea, fatigue, and weight loss. The patient also reported right hypochondrium pain and loss of appetite. Past medical history was relevant for hypertension, type 2 diabetes and alcohol abuse (reported alcohol consumption: 3–5 drinks per day from the age of sixteen). In 2016 he was diagnosed with squamous cell lung carcinoma (stage T4N3M0) and treated with neoadjuvant polychemotherapy (cisplatine + vinorelbin) followed by right pneumonectomy. Despite a history of cancer, he was still an active smoker. His home therapy consisted of insulin and acetylsalicylic acid 100 mg/day.

PAST is a possible complication after lung surgery (2), generally occurring within 12 months (early PAST), even if a delayed presentation has also been described (late PAST) (4–10). Usually it is asymptomatic and incidentally detected during a follow-up CT-scan (3). However, English literature reports anecdotal cases of patients complaining of dyspnoea finally diagnosed with PAST (Table 1). At present, risk factors and mechanisms at the basis of this thrombotic event are still poorly understood. In a retrospective analysis of 648 oncologic surgeries for primary lung cancer, 25 (3.8%) PAST were found (3). Among them, elderly age, advanced cancer stage and neo-adjuvant chemotherapy could represent risk factors for its development (3). Regarding pathophysiological mechanisms for stump thrombosis, Virchow's triad has been indicated as one of the possible causes (3). On this connection, three processes could be hypothesized:

1. Endothelial injury during surgery. Complex surgeries and vascular manipulations increase the risk of endothelial damage, reducing the production of fibrinolytic activators with a consequent pro-coagulant state (16). For this reason, the technique with continuous ligature of the stump has been considered more appropriated than the transfixation one, obtaining a regular stump which decreases the probability of PAST. However, this mechanism could be mainly responsible for early PAST.

2. Blood flow stasis of the vascular stump. There is a correlation between stump's length and changes in blood flow dynamics (e.g., blood flow turbulence) (11). Basing on the retrospective revision of chest CT-scans of patients treated with pneumonectomy, Kim and co-workers (2) evidenced that the stump is longer after a right pneumonectomy than after a left pneumonectomy, and the thrombus was more frequently detected in the right (23.3%) than in the left (4.6%) stump. On the contrary Kwek and colleagues (11) found an almost equal incidence of thrombi between right and left stumps. Concerning lobectomy, left-sided thrombi were more common than right-sided one (3).

3. Hypercoagulability. Increased platelet count and fibrinogen level at 7th and 14th day after lung surgery were observed as factors associated with higher thrombotic activity (17). In addition, other factors such as smoking (18), active cancer (19), and sepsis (20) are known to increase blood coagulability. To date, an association between PAST and inherited/acquired thrombophilia has never been described. 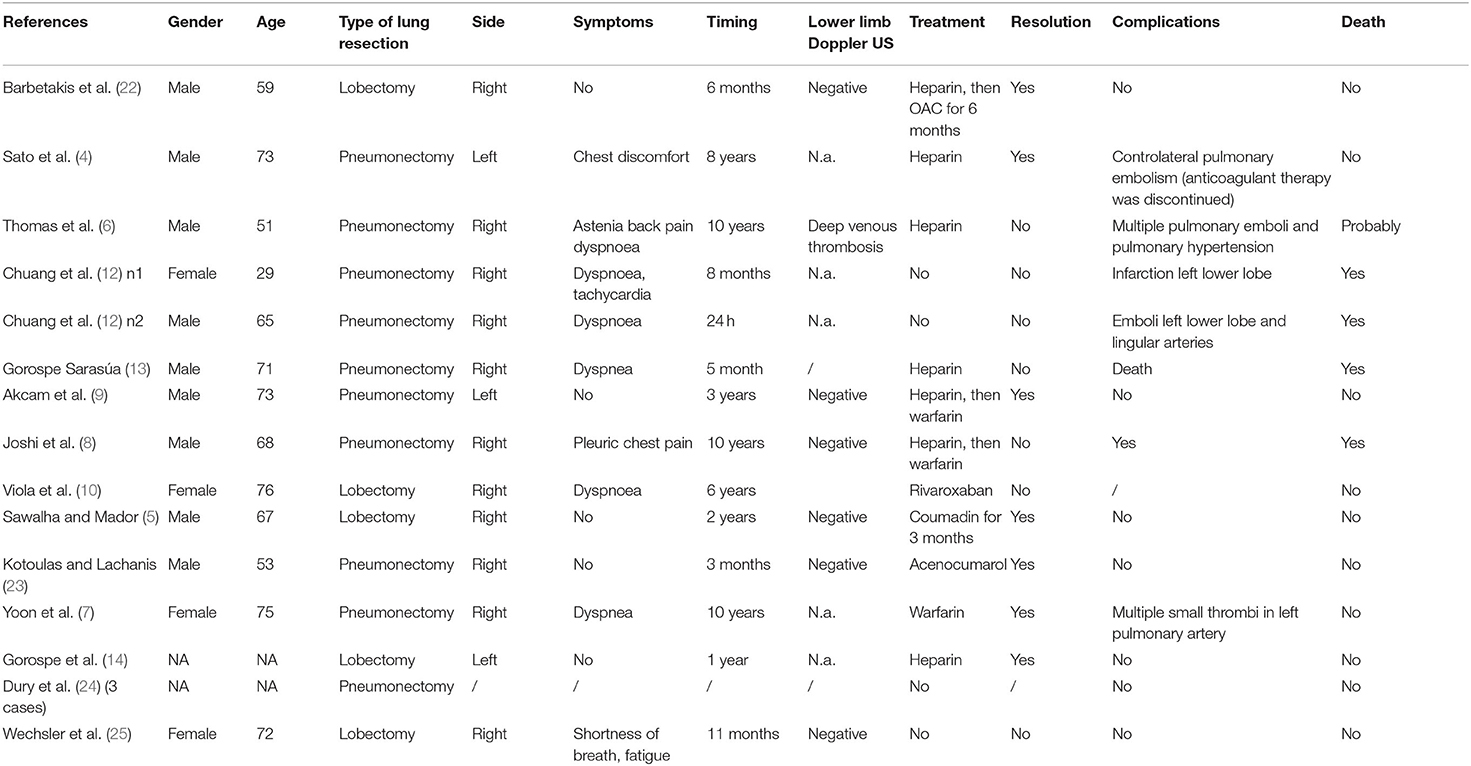 Table 1. Cases of PAST reported in the English literature.

The need for anticoagulation in patients with PAST is still matter of debate. According to literature, early PAST is more likely to resolve spontaneously, regardless from anticoagulation, while late PAST usually shows a poor rate of resolution (21).

Among the 17 case reports of PAST reported in the English literature, seven of them were late PASTs (Table 1); all received anticoagulant therapy, the majority of which resolved.

Moreover, anticoagulation could be started according to the morphology of PAST at CT scan. Convex-shaped and floating PAST are considered more acute and at high-risk of embolization to the contralateral lung or of growth. On the contrary, concave-shaped thrombi are considered at lower risk of embolization and more “stable” (11). According to some authors, anticoagulation should be considered for convex thrombi or for a newly occurring PAST in the context of declining pulmonary status (8). Indeed, it is important to understand if PAST represents an in situ thrombosis, a cancer recurrence inside the vascular stump or an embolus from deep vein thrombosis (2); all of these could be indications for treatment. However, the incidence of PAST-associated PE is low (5). According to the available reports, one patient showed contralateral pulmonary embolism (4) and another one showed multiple pulmonary emboli with pulmonary hypertension (6); both of them had been treated, but just one solved (Table 1).

We reported the case of a patient complaining of dyspnoea, fatigue and abdominal pain, and weight loss. Since the presenting symptomatology was not specific for any particular disease, several examinations were performed. Chest X-ray did not show abnormalities in the left lung and, according to Wells' score, pre-test probability of PE was low. Abdominal symptoms and weight loss were consistent with chronic alcoholic liver disease, gastro-oesophagitis and duodenitis. Respiratory symptom was not justified by blood gas analysis, not showing respiratory failure. Finally, chest CT-scan evidenced the presence of PAST. According to CT-scan (Figure 1A), this was a newly evidenced late-occurring PAST with a convex-shaped thrombus in the right pulmonary artery stump with no evidence of PE. These characteristics, in conjunction with the presence of symptoms, surrounding inflammatory state, history of active smoking and previous chemotherapy led us to the decision to start anticoagulation. The CT-scan performed 4 months later found an almost complete resolution of the clot (Figure 1B).

PAST represents a possible complication after lung surgery, in particular after right pneumonectomy. Local and systemic factors seem to be involved in its pathophysiology, although the exact mechanisms are not completely understood. Generally, PAST represents an occasional finding at follow-up CT scan and it is asymptomatic; sometimes, patients could complain of dyspnoea, fatigue and chest discomfort. The choice to prescribe anticoagulants should be based on the risk of complications, such as contralateral pulmonary embolism, worsening lung function and death. At present, literature data on factors potentially favoring embolization are few and decision-making algorithms are lacking. It is conceivable that the evidence of convex-shaped thrombi and patient's thrombotic risk could represent the most important factors suggesting the need for anticoagulation. In any case, the choice for optimal treatment duration and follow-up should be evaluated case by case.

Written informed consent was obtained from the patient for the publication of any potentially identifiable images or data included in this article.

AM, MS, PP, and EG managed the patient during hospitalization. AM, MS, and PP thought about the study rationale. CB and AS reviewed radiological images. GS and SD reviewed collected data. AM, MS, PP, EG, and SD wrote the first draft. All Authors read, had the possibility to modify and approved the final draft of the paper.

The Supplementary Material for this article can be found online at: https://www.frontiersin.org/articles/10.3389/fcvm.2021.714826/full#supplementary-material

Copyright © 2021 Mirijello, Santoliquido, Piscitelli, Borelli, Serviddio, Simeone, Grandone and De Cosmo. This is an open-access article distributed under the terms of the Creative Commons Attribution License (CC BY). The use, distribution or reproduction in other forums is permitted, provided the original author(s) and the copyright owner(s) are credited and that the original publication in this journal is cited, in accordance with accepted academic practice. No use, distribution or reproduction is permitted which does not comply with these terms.