Objective: This study aims to investigate the incidence of PVI non-responders in patients undergoing a repeat procedure, as well as the predictors for the recurrence of repeat ablation.

Methods: A total of 276 consecutive patients who underwent repeat ablation from August 2016 to July 2019 in two centers were screened. A total of 64 (22%) patients with durable PVI were enrolled. Techniques such as low voltage zone modification, linear ablation, non-PV trigger ablation, and empirical superior vena cava (SVC) isolation were conducted.

Atrial fibrillation (AF) is among the most common arrhythmias in clinical practice. Pulmonary vein isolation (PVI) has become the cornerstone of ablation for paroxysmal and non-paroxysmal AF since Haissaguerre demonstrated that AF primarily originated from pulmonary veins (PVs) (1, 2). Despite the continuous development of ablation strategies and techniques, many patients continue to suffer from atrial arrhythmias recurrence post initial radiofrequency catheter ablation (RFCA) (3). PV reconnection was considered to be the primary cause for the recurrence of AF (4). However, the PVs in some patients were still isolated during the second procedure (5, 6). Empirical strategies of the second ablation in these patients comprise left atrial substrate modification, ablation of non-PV triggers, and linear ablation (7, 8). The optimal strategy of the repeat procedure for PVI non-responders remains unclear. This study investigates the incidence of PVI non-responders in patients undergoing repeat procedures and the predictors for the recurrence of repeat ablation.

From August 2016 to July 2019, patients with recurrent AF who underwent first repeat ablation in The First Affiliated Hospital of Nanjing Medical University and Affiliated Hospital of Nantong University were screened. The inclusion criteria considered durable PVI in a repeat procedure. The exclusion criteria comprised: (1) patients underwent multiple ablations for AF, (2) the index ablation with cryoballoon, and (3) surgical ablation. An informed consent form of RFCA was signed before the procedure. The study was approved by the ethics committee of our institute.

Fibrotic modification based on voltage mapping during sinus rhythm

Ablation of fibrosis identified by voltage mapping was the primary strategy for PVI non-responders. If the initial rhythm was AF, cardioversion was initially taken. A high-density voltage mapping of the left atrium (LA) during SR was performed, using three-dimensional mapping systems (Carto, Ensite, or Rhythmia) and high-density mapping catheters (Pentaray, AFocus II, or Orion). A low voltage zone was identified as the bipolar voltage in the 0.1–0.4 mV range. Fibrosis-based modification was then performed to achieve an absolute bipolar electrogram of <0.1 mV. The detailed steps are prescribed in our prior study (9).

Linear ablation and its bidirectional block

SVC was the most common non-PV trigger source (10). If SVC was confirmed as a trigger source by drug provocation, SVC isolation was performed. Otherwise, empirical SVC isolation was at the discretion of the physician. RA-SVC angiography was performed by manual injection and the junction of the convex RA wall and the straight SVC wall was defined as the radiological RA-SVC junction (2). Electroanatomic maps of RA and the region around the radiologic RA-SVC junction were created during sinus rhythm, and the earliest activation region was defined as the sinus node area (3). The right phrenic nerve was mapped subsequently by pacing around the RA-SVC with an output of 20 mA (4). Point-by-point ablation was delivered at the level of 1–2 cm above the RA-SVC junction with 20–25 s for each point, and RF energy was set as 20–30 W with 17 ml/min of saline irrigation and a maximum temperature of 42°C using an open irrigation catheter. Great carefulness was taken to avoid injury to sinus node and phrenic nerve (5). The ablation endpoint was set as bidirectional block across the line.

Anti-arrhythmic drugs were discontinued 3 months after the procedure. Patients were followed up at 1, 3, 6, and 12 months and then yearly post the repeat procedure. 24-h or 7-day Holter ECGs were recorded at every visit. An ECG was performed in case of any symptoms of palpitation. Recurrence was defined as any atrial tachyarrhythmia that lasted longer than 30 s after the 3-month blank period.

Continuous variables were described as mean ± standard deviation values, and a t-test was performed to compare the two groups. Categorical variables were expressed as numbers and percentages. The chi-square or Fisher’s exact test were used to compare the categorical data. To identify the factors associated with recurrence, multivariate logistic regression was performed (Forward LR Method) with the variables of statistical significance in univariate analysis. Statistical analysis was performed using SPSS 26. A p-value < 0.05 was considered statistically significant. 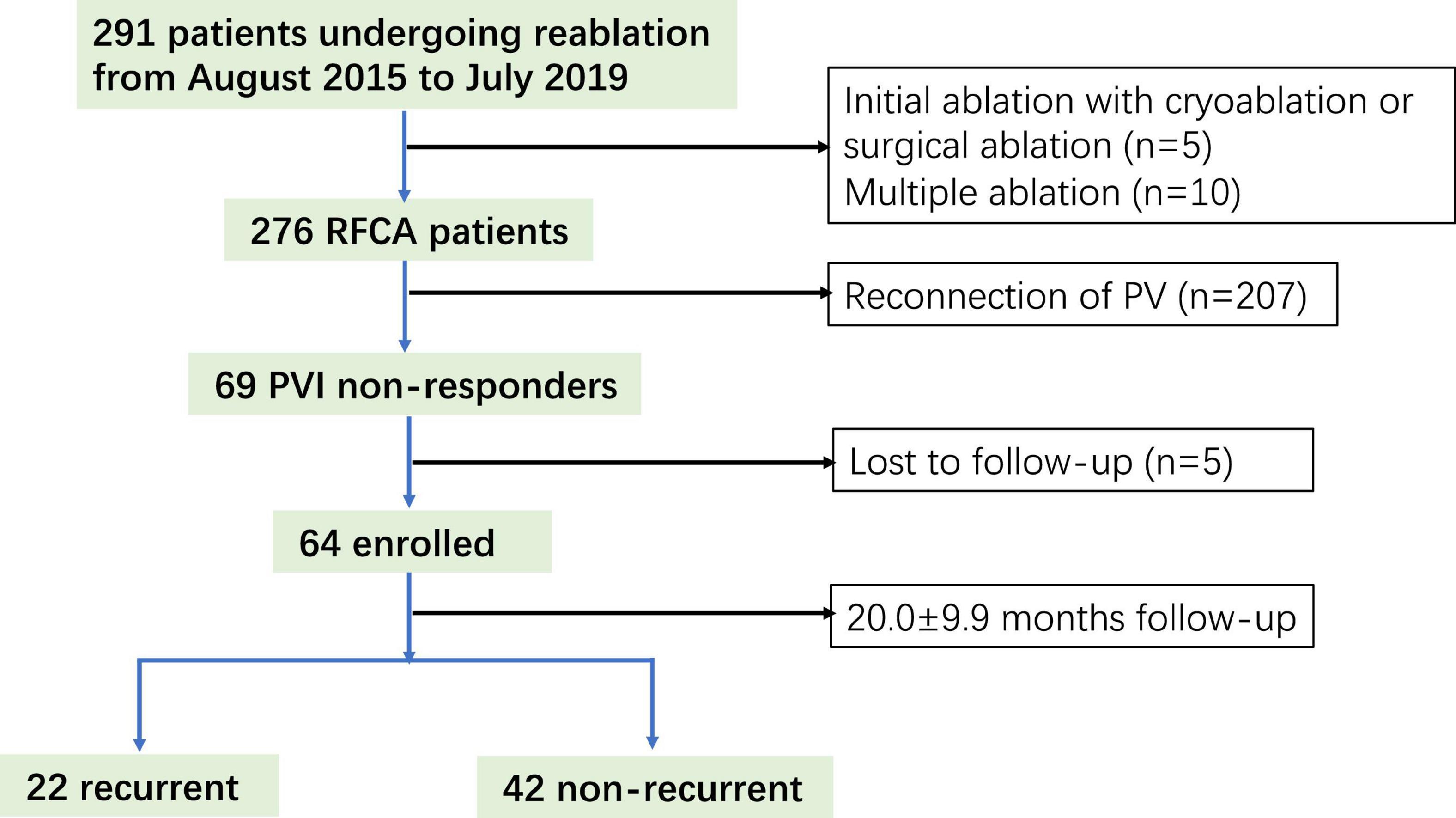 Table 1. Demographic and clinical characteristics of the recurrent and non-recurrent groups.

Non-PV triggers were confirmed in nine patients (14.1%). Among them, five cases (7.8%) in SVC, three (4.7%) in fossae ovalis, and two (3.2%) in crista terminalis. In 59 patients without definite SVC triggers, empirical SVC isolation was performed in 29 patients. The demographic and clinical characteristics of empirical and non-empirical SVC isolation groups are illustrated in Table 2. 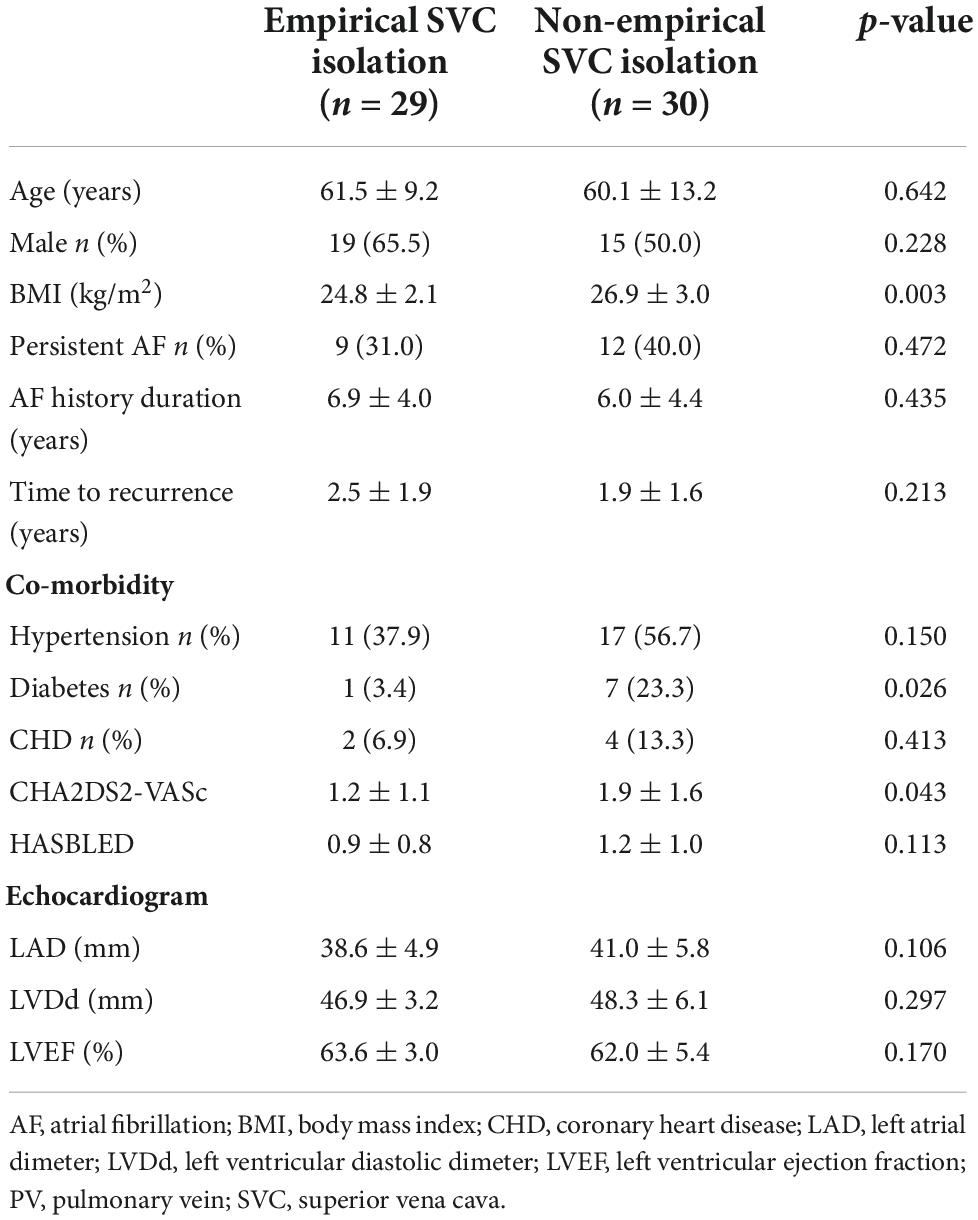 Table 3. Procedural characteristics of the recurrent and non-recurrent groups. 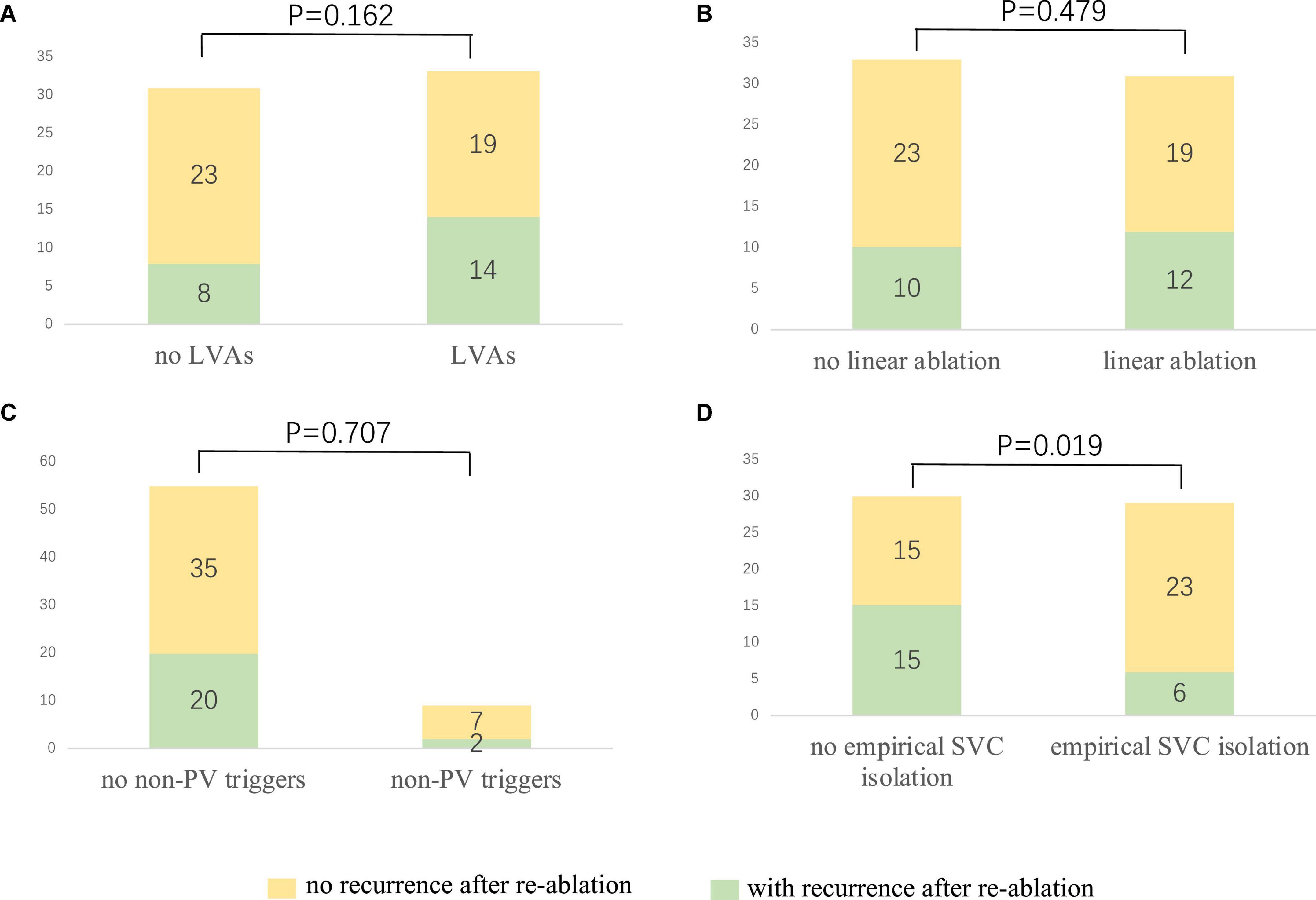 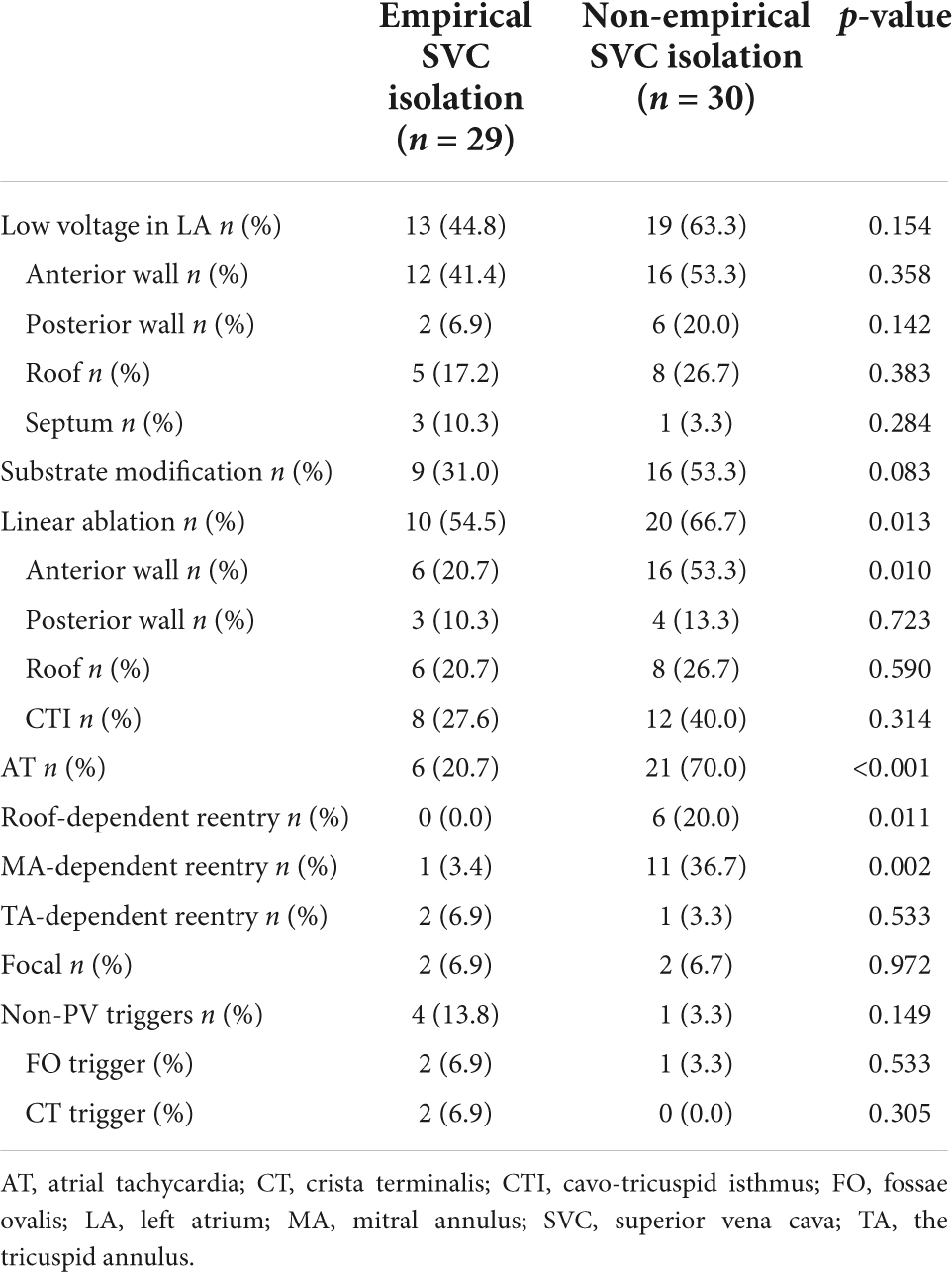 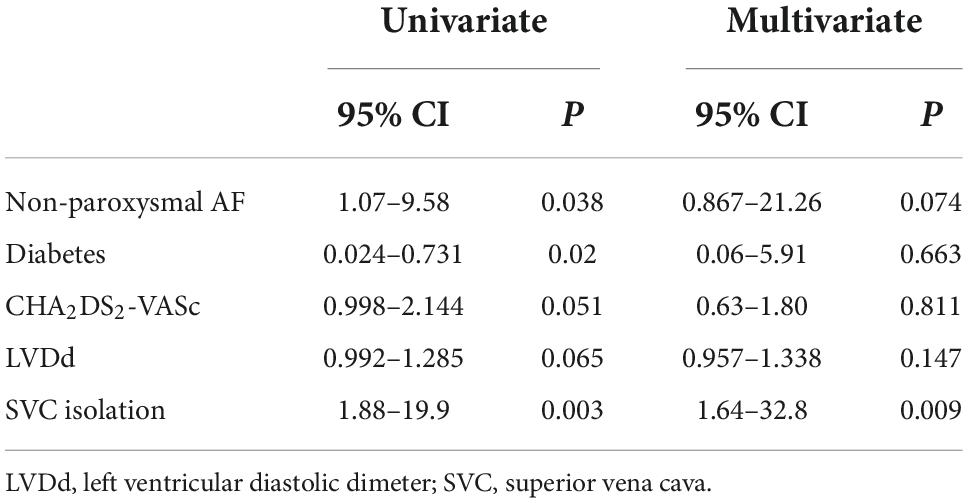 No severe complications were detected until discharge and during follow-up.

Haissaguerre found that the occurrence of AF was closely associated with triggering foci, which are typically located in PVs. Therefore, PVI has become the cornerstone of ablation for AF. Prior studies suggest that the recurrence of AF is associated with the reconnection of PVs. The primary reasons were as follows: (1) the likelihood of finding four isolated PVs during the second ablation was relatively rare; and (2) re-isolation of the gaps improved the outcomes of ablation (11). Prior studies demonstrated a low incidence of complete PV isolation during the second ablation (12). However, with the wide application of a contact-force sensing catheter (CFSC) and second-generation cryoballoon, the efficiency of PVI significantly increased (13–16). Currently, the incidence of finding four isolated PVs during the second AF ablation is much higher than before. De Pooter et al. (17) reported that in a CSFC-guided PVI investigation (CLOSE study), 62% of recurrent patients were PVI non-responders, suggesting that the reconnection of PVs was no longer a major factor for the recurrence after initial ablation. This present study found that 78% of patients with recurrent AF had one or more PVs reconnected during the second procedure, which was higher than recent data. The possible reason may be due to a high proportion (73.2%) of initial procedures guided by non-contact-force sensing catheters. With the development of technology and the prevalence of CFSC, the proportion of PVI non-responders will gradually increase. Therefore, optimal strategies for the second ablation procedure for these types of patients merit further research.

Fibrosis of the atrium was closely associated with the occurrence and maintenance of AF and was considered an important substrate for the maintenance of non-paroxysmal AF (18, 19). Prior studies suggested that patients with severe left atrial fibrosis had a lower chance of maintaining SR post-ablation (20–22). It was reported that low voltage distribution is highly consistent with the fibrotic area detected by cardiac magnetic resonance (23). Voltage mapping during SR is typically applied to reflect the fibrosis of LA. Therefore, a high-density voltage mapping-guided substrate modification was generally used in this study. The linear ablation of the left atrium was performed according to the distribution of low voltage areas. For patients without a low voltage in the left atrium, no additional linear ablation was performed to avoid any iatrogenic atrial tachycardia. The strategy for individual substrate modification was described in our previous study (9). The present study demonstrated that other strategies, including linear ablation and substrate modification did not improve the outcomes of the repeated procedure. We speculate the possible reasons as follows: although substrate modification could potentially improve the outcome of patients with “diseased” left atrium, such benefit might be diluted in the whole AF population, especially when the sample size was not powerful enough to support the benefit. 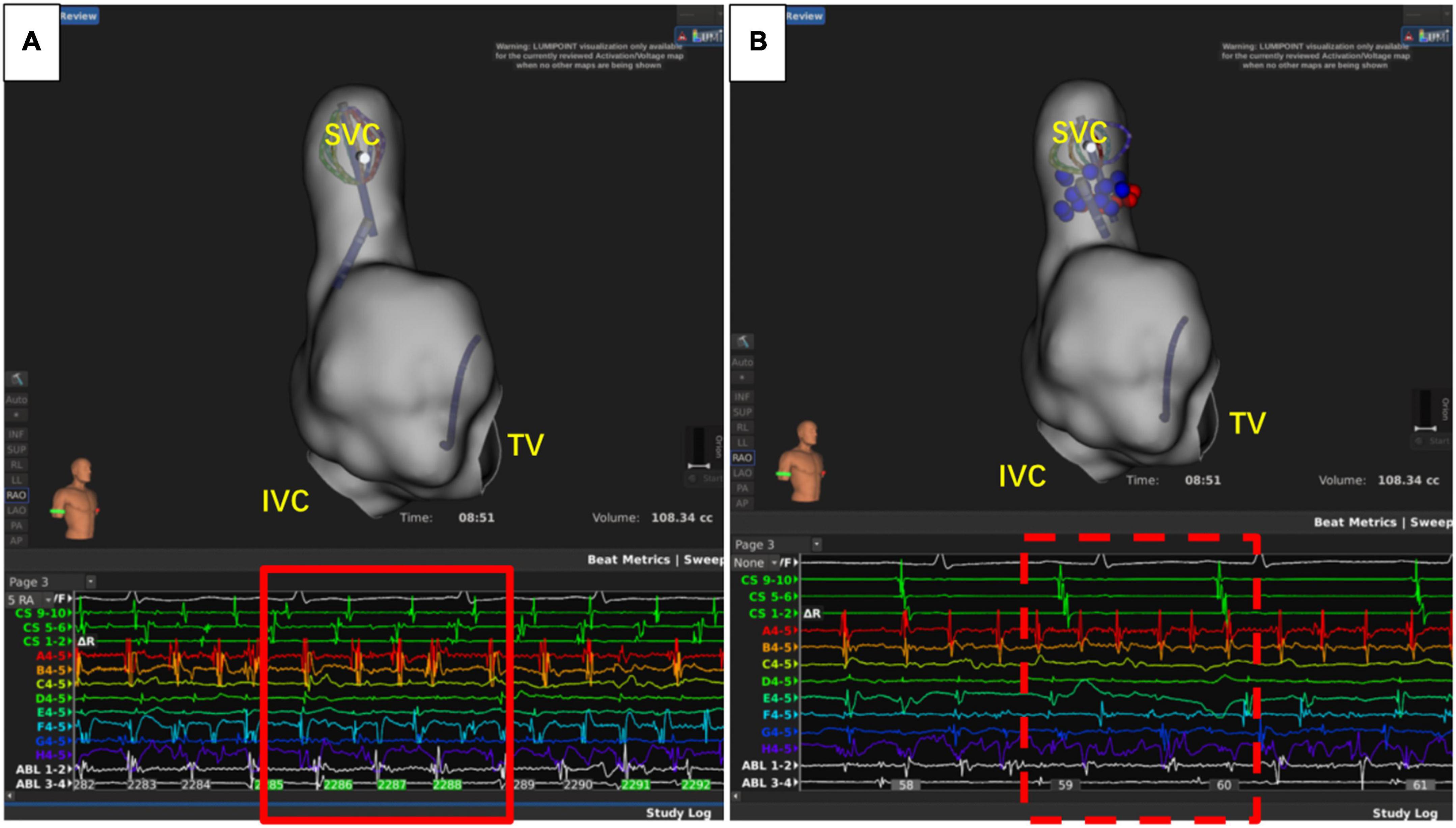 Our study has some limitations. First, this was a retrospective study with small sample size, which led to potential selection bias. Second, no data on serum markers of atrial fibrosis were available. Third, a stronger follow-up strategy employing a 7-day Holter ECG or implanted loop recorder may be needed to detect the recurrence of asymptomatic atrial arrhythmia. Fourth, other empirical interventions of dormant non-PV triggers were not adopted and compared in this study. Further large-scale prospective studies with longer follow-up times are needed to validate the efficacy and safety of empirical SVC isolation in PVI non-responders.

During the repeat procedure of AF ablation, 22% were identified as PVI non-responders. Empirical SVC isolation may improve the outcome of re-ablation.

The original contributions presented in this study are included in the article/Supplementary material, further inquiries can be directed to the corresponding author.

The studies involving human participants were reviewed and approved by Ethics Committee of The First Affiliated Hospital of Nanjing Medical University. The patients/participants provided their written informed consent to participate in this study.

The Supplementary Material for this article can be found online at: https://www.frontiersin.org/articles/10.3389/fcvm.2022.1049414/full#supplementary-material

Copyright © 2022 Gu, Yang, Ju, Li, Chen, Gu, Liu and Chen. This is an open-access article distributed under the terms of the Creative Commons Attribution License (CC BY). The use, distribution or reproduction in other forums is permitted, provided the original author(s) and the copyright owner(s) are credited and that the original publication in this journal is cited, in accordance with accepted academic practice. No use, distribution or reproduction is permitted which does not comply with these terms.