Department of Clinical and Molecular Medicine, Faculty of Medicine and Psychology, Sapienza University of Rome, Italy

Background: We sought to explore the significance of resting cardiac power/mass in predicting adverse outcome in patients with heart failure with preserved ejection fraction (HFpEF).

Chronic heart failure (HF), characterized by decreased cardiac systolic and/or diastolic function, is a primary cause of morbidity and mortality worldwide (1). A primary concern in HF management lies in accurately and comprehensively evaluating cardiac function, especially left ventricular (LV) function, as the left ventricle is responsible for most of the physiological functions of the heart. When evaluating LV function, clinicians usually adopt the traditional indexes including LV ejection fraction (EF) and cardiac output. Although well known, these measurements may fail to provide a comprehensive assessment of LV function. In addition, nearly half of all HF patients have preserved EF (namely HFpEF) (2). Thus, EF alone seems inadequate to identify high-risk individuals among HF patients.

Cardiac power refers to the rate at which the heart pumps blood out and delivers it to the periphery (3). Thus, it is an integrative and quantitative indicator of overall cardiac performance that combines cardiac pressure and volume loads. Normally, 3 mmHg of right atrial pressure, 120/80 mmHg of arterial pressure, and 5 L/min of cardiac output produce ∼1 W of resting cardiac power. Some studies have shown that higher resting and peak cardiac power are associated with a lower mortality in patients with chronic and advanced HF (4, 5). Furthermore, a retrospective study conducted by Anand et al. (6) showed that in patients with normal EF and no HF undergoing exercise stress echocardiography, higher cardiac power was independently associated with a lower prevalence of complications, as well as a lower risk of all-cause mortality and the incidence of subsequent HF, suggesting the potential prognostic value of cardiac power.

This study was approved by the Ethics Board of the No. 988 Hospital of Joint Logistic Support Force of the Chinese PLA and was conducted in line with the ethical guidelines of the 1975 Declaration of Helsinki. Written informed consent was obtained from each patient. The datasets used and/or analyzed during the current study are available from the corresponding author on reasonable request.

This prospective cohort study recruited patients who were hospitalized in the Cardiology Department of the No. 988 Hospital of Joint Logistic Support Force of the Chinese PLA (Zhengzhou, China) from April 2012 to December 2021. We used the following criteria to select HFpEF patients: those with (i) history of HF hospitalization; (ii) HF syndromes and/or signs, (iii) EF ≥ 50%, and (iv) N-terminal pro-brain natriuretic peptide (NT-proBNP) ≥ 125 pg/mL. Additionally, eligible HFpEF patients were required to be stable and well-compensated without medication changes for at least 6 weeks prior to enrollment. Patients who had one of the following conditions were excluded: EF < 50% at rest, enlarged right ventricle, significant valve disease (≥ moderate stenosis or regurgitation, prosthetic valve replacement, surgical or percutaneous valve repair, rheumatic valve disease), hospitalization for uncompensated HF or unstable coronary heart disease in the prior 6 weeks, heart transplant, metastatic malignant tumor, severe liver disease or receiving palliative care. Via electronic medical records, we collected patient detailed medical history, baseline clinical characteristics, laboratory indexes and echocardiographic parameters.

Until December 31, 2021, all patients were followed up via telephone or medical record every 6 months for the composite endpoint which consisted of all-cause mortality or HF hospitalization, and the causes of death was also recorded. Furthermore, we contacted the attending physician of each patient who had an event to reconfirm their outcome. For patients who did not have an event, survival time was defined as the period from the day of physical examination to the last date of follow-up. 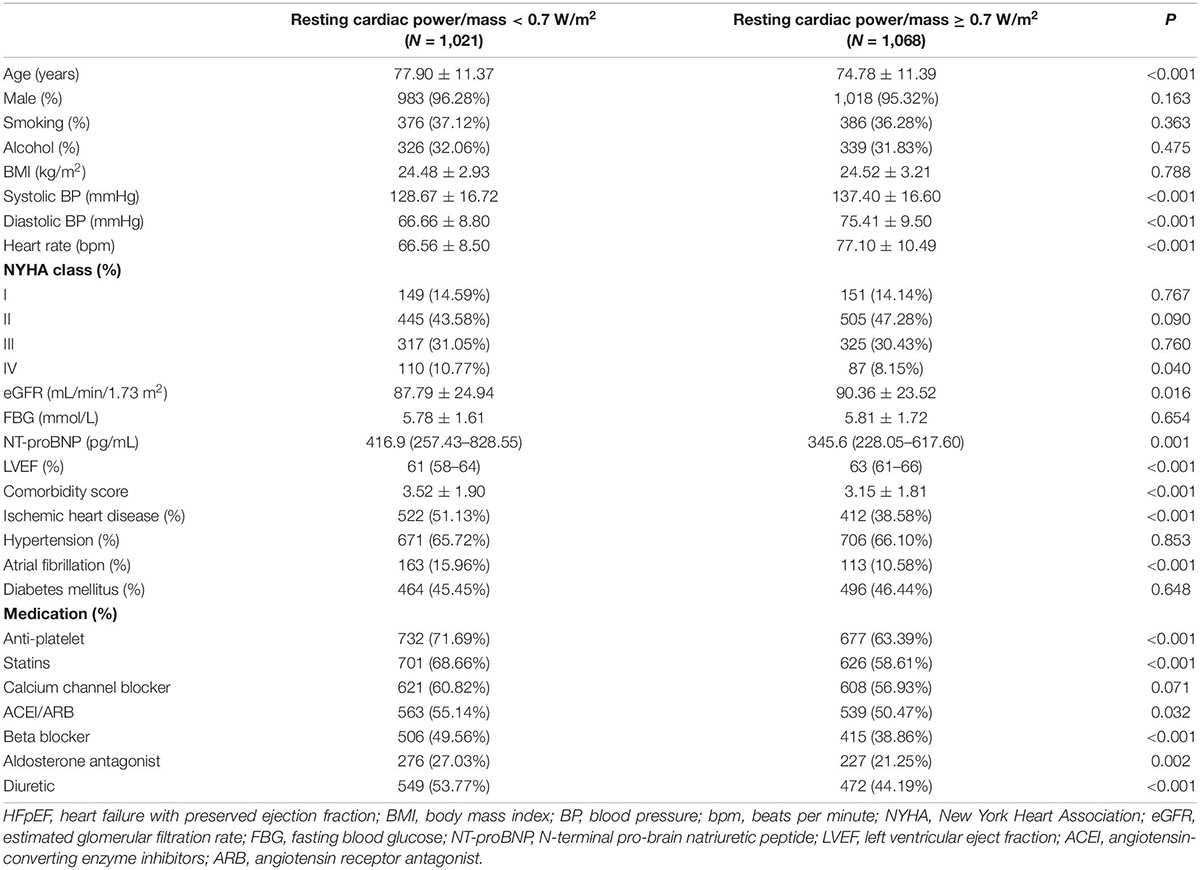 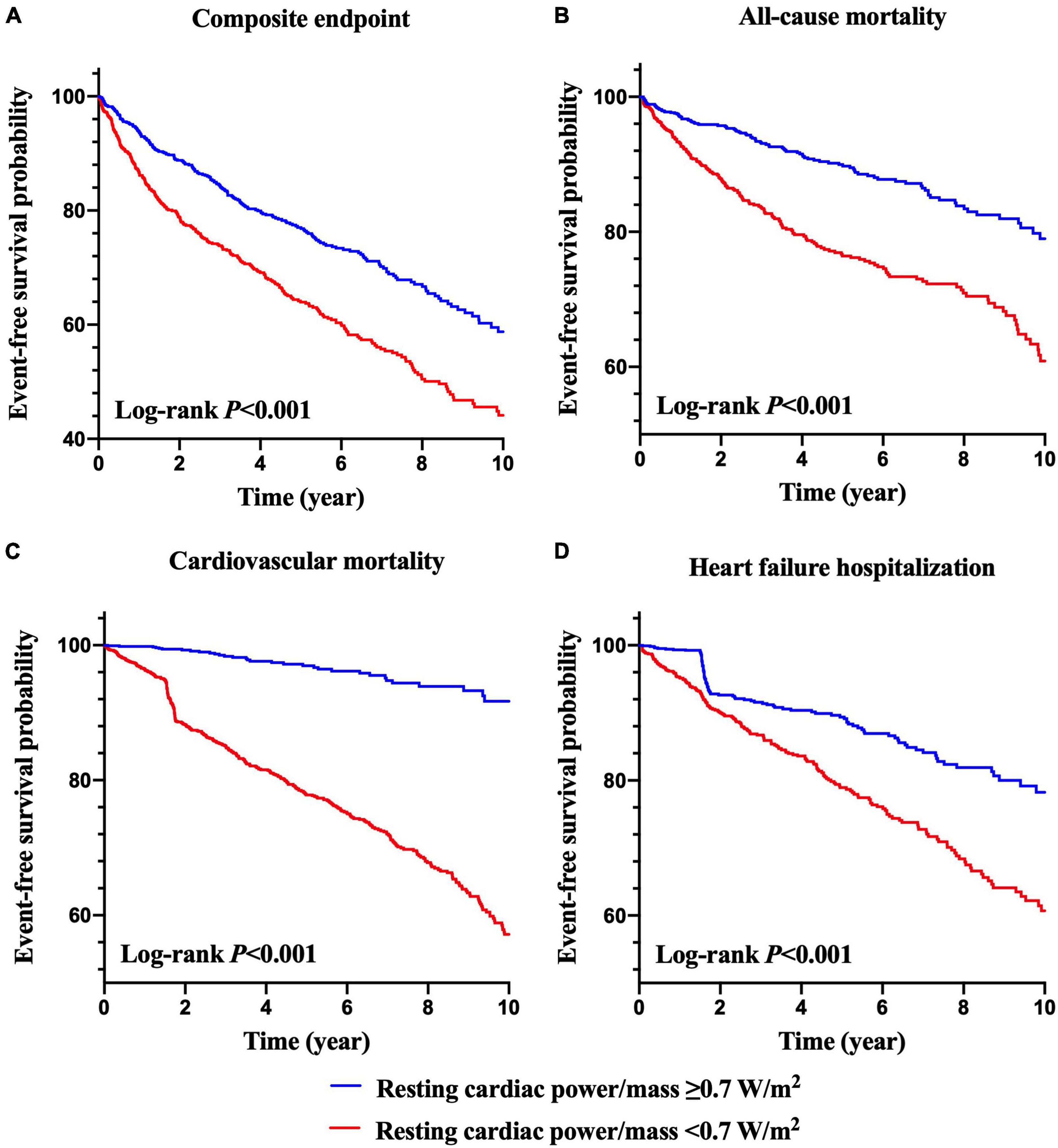 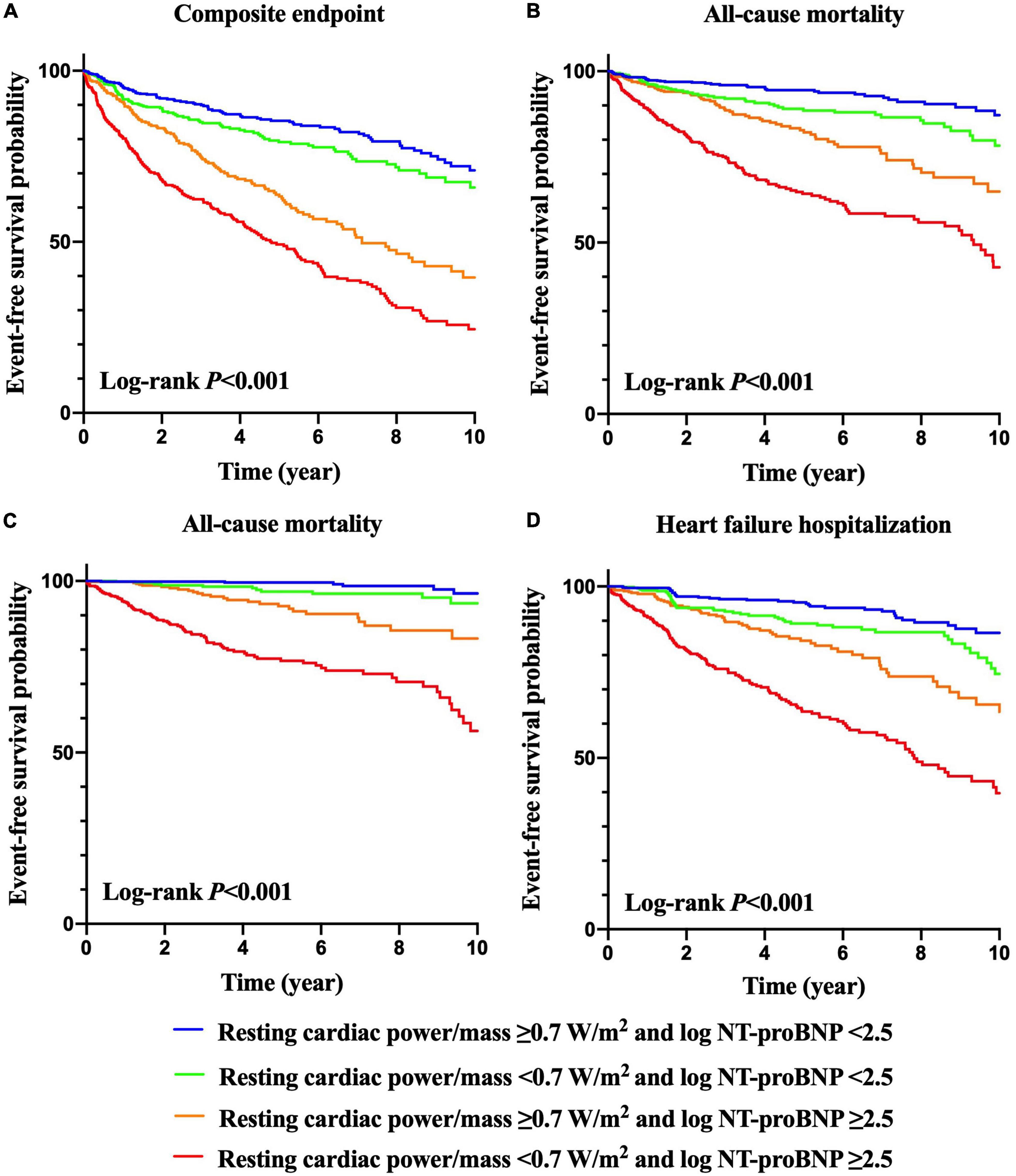 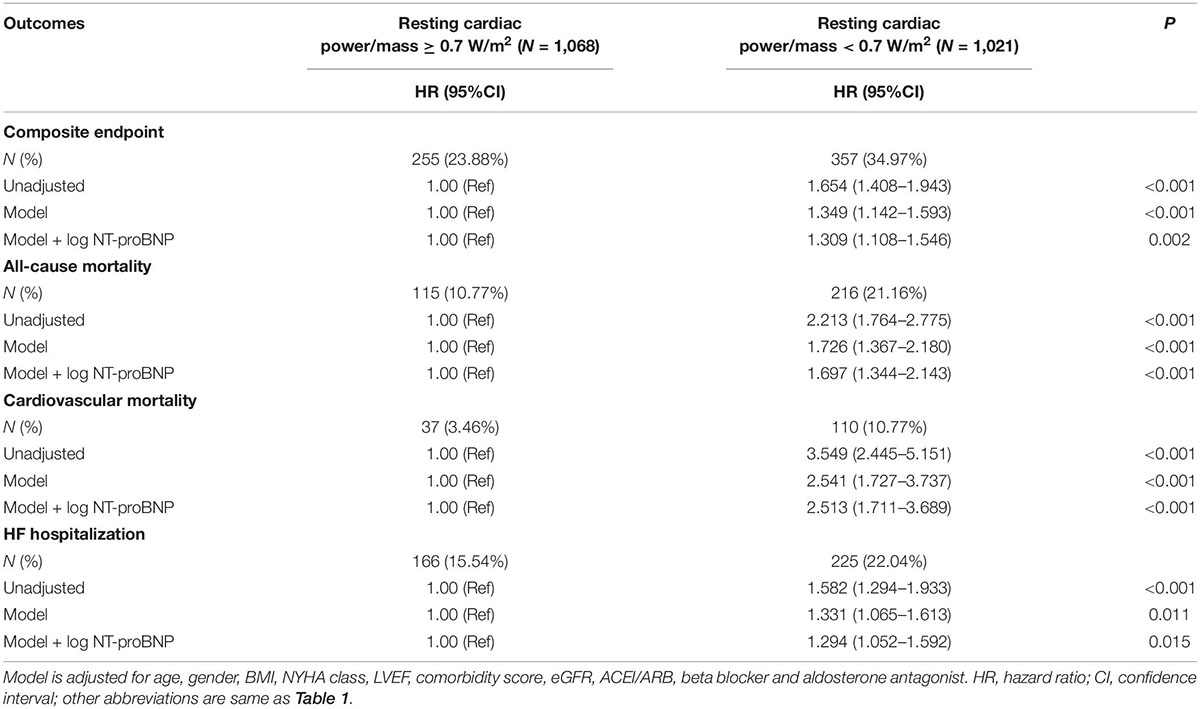 We further explored the predictive value of resting cardiac power/mass by C-index (Table 3). The individual addition of log NT-proBNP or resting cardiac power/mass in the model significantly improved the C statistic for predicting composite endpoint, cardiovascular mortality, and HF hospitalization. Also, the two indicators significantly increased the C statistic for predicting adverse outcomes when they were incorporated into the established model. 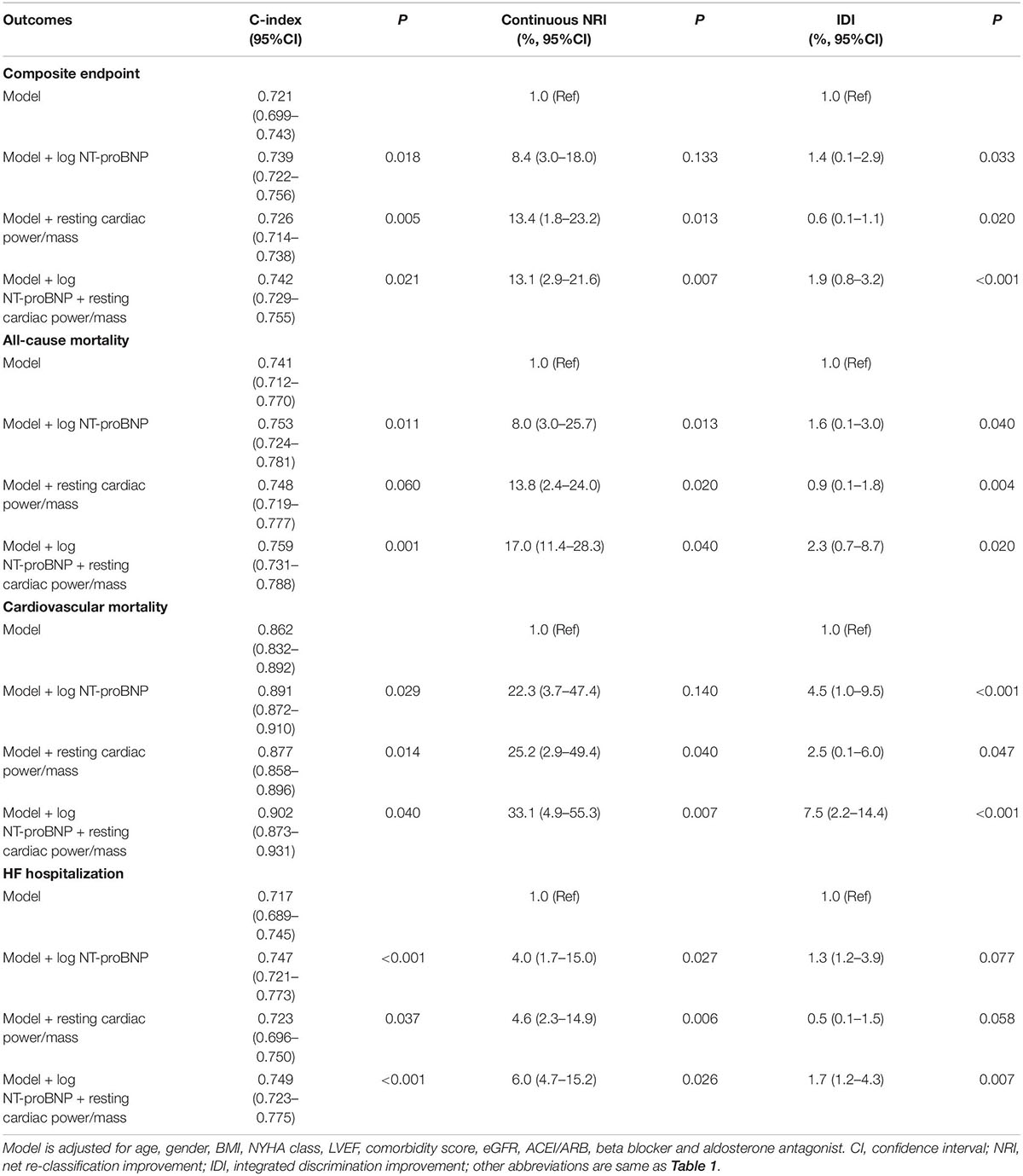 Resting Cardiac Power/Mass as an Independent Predictor of Outcomes 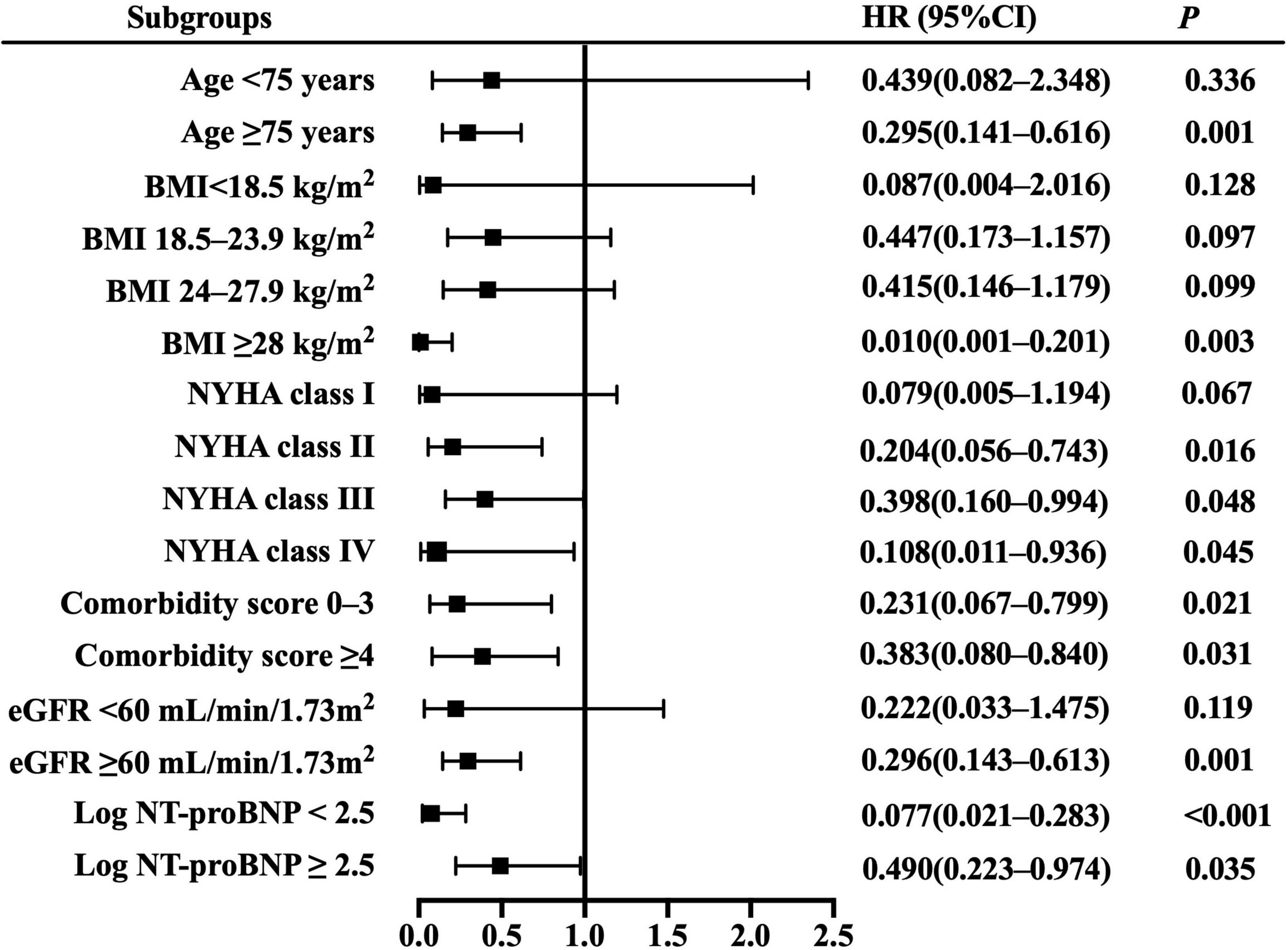 In the present study, we comprehensively investigated the potential prognostic role of cardiac power estimated by non-invasive echocardiography in patients with stable HFpEF. In this study, we found that (i) cardiac power normalized to LV mass at rest was independently associated with adverse outcomes in patients with HFpEF, and that (ii) incorporating resting cardiac power/mass (reflective of comprehensive cardiac function) and NT-proBNP (indicative of myocardial stretch) into a model with established risk factors enhanced the prognostic value for those endpoints.

As is well known, LV diastolic dysfunction plays a fundamental and predominant role in the pathophysiology of HFpEF (10) and elevates filling pressure, which further promotes dyspnea, impairs exercise capacity, and increases mortality and incidence of HF hospitalization (11). Non-invasive echocardiography is an indirect approach to measuring LV diastolic function. Due to its safety and rapidity, echocardiography is usually preferred for clinicians before performing invasive right heart catheterization. However, individual parameters of echocardiography, such as left atrial volume index and the mitral annular diastolic velocity, have their own limitations and may fail to accurately determine the degree as well as the severity of LV dysfunction. Moreover, a combination of these parameters undoubtedly increases the work burden on clinical staff and is not conducive to clinical application.

Despite having a “preserved” EF, patients with HFpEF nonetheless experience abnormalities in LV systolic performance (12, 13). Multiple studies have demonstrated that patients with HFpEF present with subtle impairments in systolic function at rest, and this alteration tends to increase during exertion, which impairs LV suction, decreases cardiac output, and elevates LV filling pressures (14, 15). LV systolic dysfunction in HFpEF also predicts increased risk of adverse outcomes (16, 17). Some scholars question the ability of EF to truly reflect the LV systolic function of HFpEF (18). HFpEF is often complicated with myocardial concentric hypertrophy, which inevitably generates a normal or supernormal EF, even when stroke volume has declined. Therefore, a non-invasive method that can quantify LV pump function better than EF would be a major step forward.

Cardiac power is a comprehensive quantitative indicator that can be used to evaluate cardiac function via non-invasive echocardiography (4, 19). It is superior to variables such as cardiac output because it covers both pressure load and volume load (20). Because cardiac power depends on the volume of the muscle that produces the power, standardizing cardiac power with LV mass can improve the applicability of this indicator in different populations (4, 5, 19) and facilitate comparison between individuals. In addition, cardiac power may be more promising than EF as predictor of mortality in severe heart failure. It has been reported to be the strongest predictor of in-hospital mortality in patients with cardiac shock resulting from acute myocardial infarction (20), and has recently been used to evaluate the response of patients with advanced HF to mechanical circulatory support systems (21).

Our study has some limitations: first, it should be noted that this was a single-center study and 95.79% of our patients were male because we included patients from the veteran population, thus we failed to observe the association between rest cardiac power and adverse outcomes in gender subgroup, and our conclusion might be more suitable for male patients. We further conducted Cox proportional hazard model and adjusted gender, age and other covariates, and the results were still significant, suggesting that rest cardiac power/mass predicts the adverse outcomes in HFpEF patients independent of gender, therefore the results of this study were still representative to some extent, and studies conducted with more female patients are needed to validate our findings. Secondly, compared with invasive measurements, the non-invasive measurements of stroke volume may be more inclined to error. Thirdly, this study failed to perform speckle tracking echocardiography and thus lacked the information of global longitudinal strain, which helps determine the impaired systolic function in patients with normal ejection fraction and should be fully considered in the further studies. Last, the prognostic value of peak or reserved cardiac power indexed to LV mass has not been evaluated in patients with HFpEF.

The original contributions presented in this study are included in the article/Supplementary Material, further inquiries can be directed to the corresponding author.

This study was approved by the Ethics Board of the No. 988 Hospital of Joint Logistic Support Force of the Chinese PLA. The patients/participants provided their written informed consent to participate in this study.

The Supplementary Material for this article can be found online at: https://www.frontiersin.org/articles/10.3389/fcvm.2022.915918/full#supplementary-material

Copyright © 2022 Wang, Chen and Duan. This is an open-access article distributed under the terms of the Creative Commons Attribution License (CC BY). The use, distribution or reproduction in other forums is permitted, provided the original author(s) and the copyright owner(s) are credited and that the original publication in this journal is cited, in accordance with accepted academic practice. No use, distribution or reproduction is permitted which does not comply with these terms.