The impact of UEFA Euro 2020 football championship on Takotsubo Syndrome: Results of a multicenter national registry

Objectives: The UEFA 2020 European Football Championship held in multiple cities across Europe from June 11 to July 11, 2021, was won by Italy, providing an opportunity to examine the relationship between emotional stress and the incidence of acute cardiovascular events (ACE).

Methods and results: Cardiovascular hospitalizations in the Cardiac Care Units of 49 hospital networks in Italy were assessed by emergency physicians during the UEFA Euro 2020 Football Championship. We compared the events that occurred during matches involving Italy with events that occurred during the remaining days of the championship as the control period. ACE was assessed in 1,235 patients. ACE during the UEFA Euro 2020 Football Championship semifinal and final, the most stressful matches ended with penalties and victory of the Italian team, were assessed. A significant increase in the incidence of Takotsubo Syndrome (TTS) by a factor of 11.41 (1.6–495.1, P < 0.003), as compared with the control period, was demonstrated during the semifinal and final, whereas no differences were found in the incidence of ACS [IRR 0.93(0.74–1.18), P = 0.57]. No differences in the incidence of ACS [IRR 0.98 (0.87–1.11; P = 0.80)] or TTS [IRR 1.66(0.80–3.4), P = 0.14] were found in the entire period including all matches of the UEFA Euro 2020 compared to the control period.

Conclusions: The data of this national registry demonstrated an association between the semifinal and final of UEFA Euro 2020 and TTS suggesting that it can be triggered by also positive emotions such as the victory in the European Football Championship finals.

The UEFA Euro 2020 Football Championship, commonly referred to as UEFA Euro 2020, was the 16th UEFA European Championship. The tournament was won by Italy, who in the final match beat England on penalties 3-2, after the 1-1 in extra time. In Italy, the emotional participation of the general population in the European football championship is robust and this year was amplified because Italy entered the semifinals and the final.

The relationship between spectators' emotions and ACE during sporting events has been reported with conflictual results (1–5).

Accordingly, the present study aimed to assess the effect of the UEFA Euro 2020 Football Championship on hospitalizations for ACE in Italy.

ACE were assessed in an Italian Registry that included 1,235 patients admitted to 49 cardiac care units across all of Italy. The distribution of patients enrolled was geographically balanced (North Italy 34%, Center 33%, South 32%). All patients' data were collected and reported into an electronic database.

The demographic and clinical data of the subjects along with the type of cardiovascular diseases were evaluated. Physicians made the clinical diagnosis of ACS or TTS based on the symptoms, the level of the markers of myocardial necrosis, EKG, Echocardiogram, and coronary angiography according to the current guidelines.

The study protocol was approved by the ethics committee of the Magna Graecia University of Catanzaro, Italy and all data were blindly analyzed. All patients provided written informed consent. The study conforms to the principles outlined in the Declaration of Helsinki.

It was not appropriate or possible to involve patients or the public in the design, or conduct, or reporting, or dissemination plans of this research.

We used Poisson regression with a time effect of 0 and +1 day to assess the effect of matches (6). 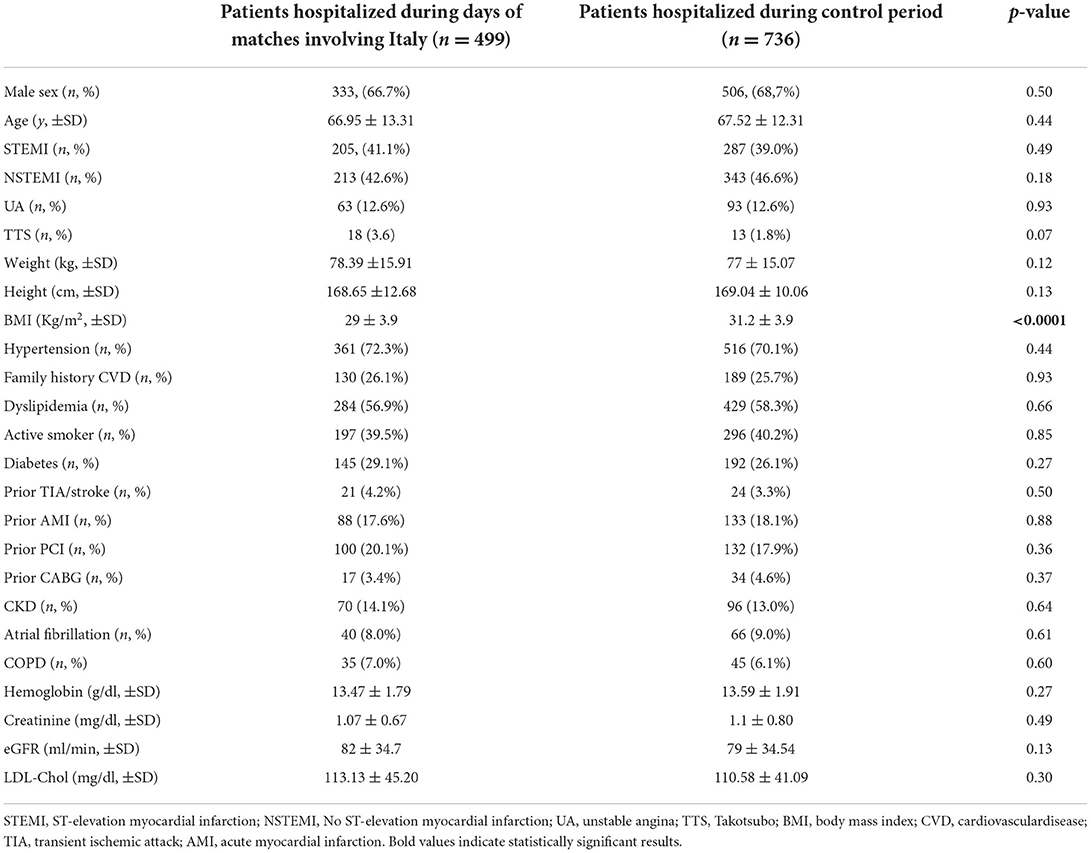 Incidence of ACE during the UEFA Euro 2020 football championship

Table 2A. Incidence of ACE on days during matches involving Italy, as compared with days during the control period.

Figure 1. Incidence rate ratios for ACE on days during the semifinal and final of UEFA Euro 2020 Football Championship, as compared with days during the control period. ACE during the semifinal and final, the most stressful matches ended with penalties, and the victory of the Italian team against Spain and England (A), showed a much more relevant increase in the incidence of Takotsubo Syndrome by a factor of 11.41 (p < 0.003) as compared with the control period. No differences were found in the incidence of ACS (P = 0.57) (B).

Table 2B. Incidence of ACE on semifinal and final matches, as compared with days during the control period.

Characteristics of patients with Takotsubo Syndrome

Among patients with TTS on days when the Italian team played, most were female (70%) with a mean age of 60.7 ± 5.5 y.o. and BMI 24.3 ± 3.02. The proportion with hypertension was 60%, dyslipidemia (20%), and the 30% were active smokers. Nobody had diabetes or known coronary artery disease. Only one suffered from chronic kidney syndrome on dialysis (Table 3). 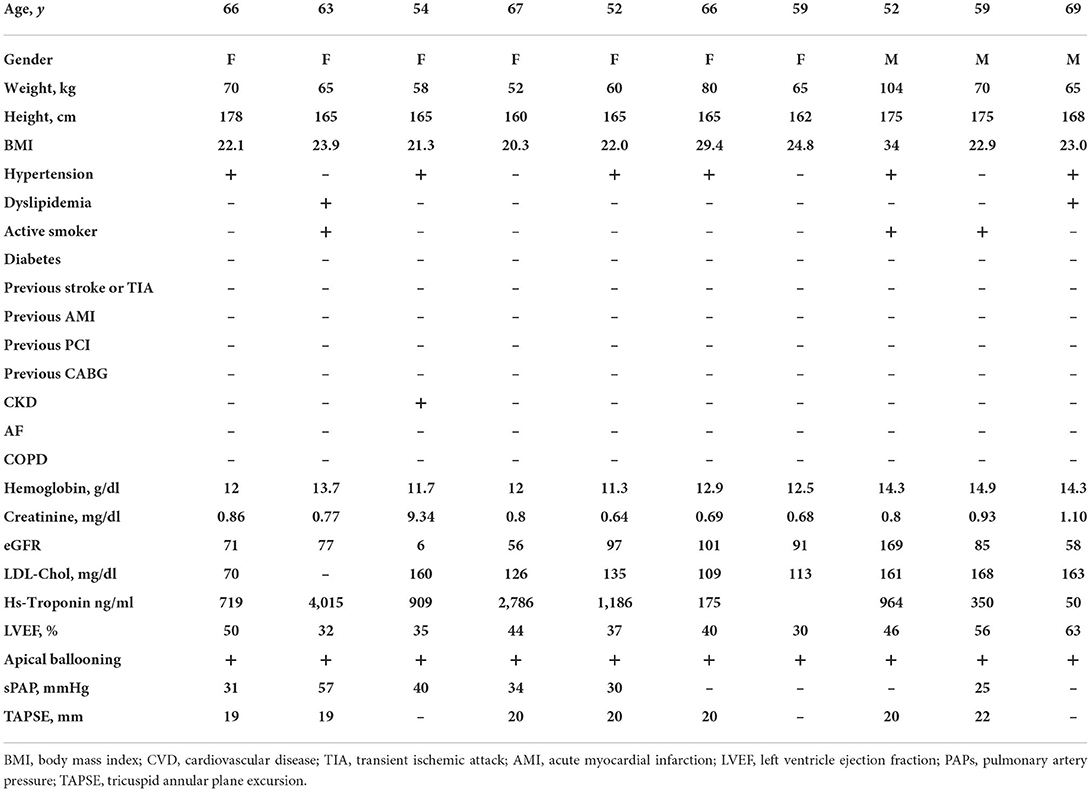 Table 3. Characteristics of patients with Takotsubo during semifinal and final matches. 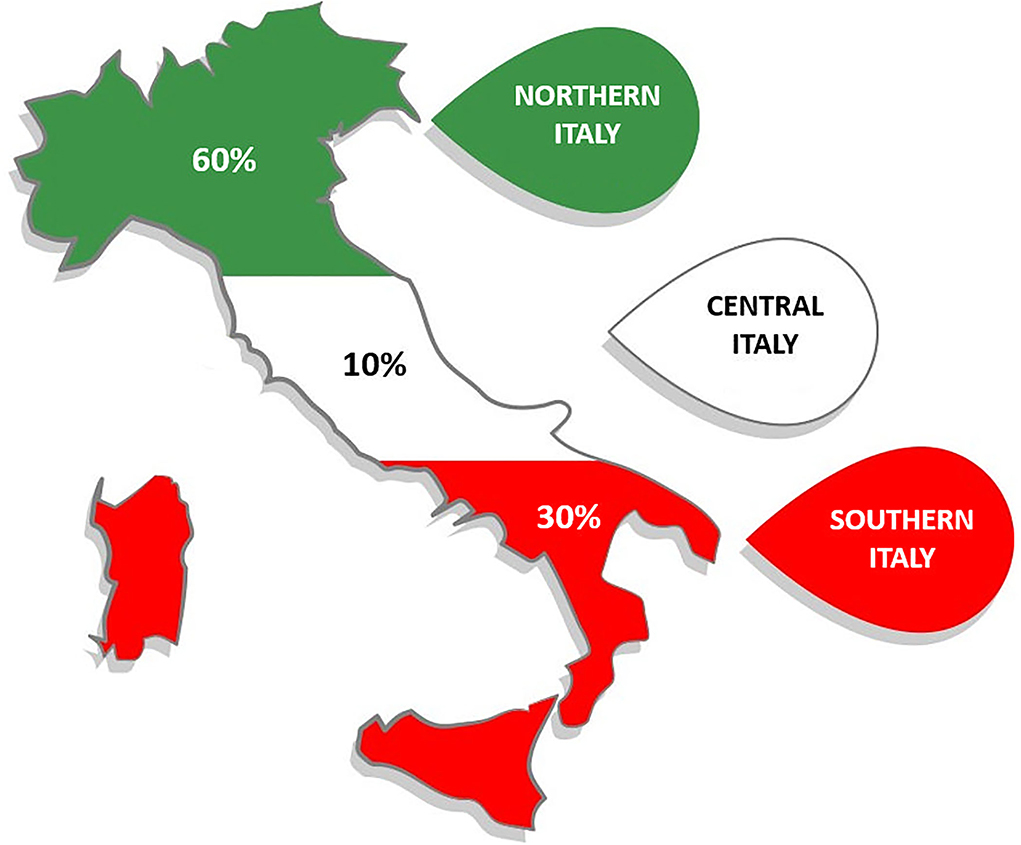 Figure 2. Geographic distribution of patients with Takotsubo Syndrome on days during the semifinal and final of UEFA Euro 2020 Football Championship.

The major finding of the present study was the significantly increased risk of Takotsubo syndrome induced by a positive event such as the semifinal and final of the UEFA Euro 2020 Football Championship, ended with the victory of the Italian team.

Since its description in 1990 (7), TTS has been defined as a syndrome precipitated by severe negative emotional stress such as pain, anger, or fear (8–10).

These precipitating causes have led to the popular definition of “broken heart syndrome” (11). It is also recognized that TTS predominantly affects postmenopausal women (12). Negative emotional stress can result in excessive or inappropriate stimulation of the sympathetic system or parasympathetic withdrawal (13).

However, TTS can be triggered by not only negative but also positive life events. Anecdotal reports (14–16) and data on the Takotsubo Registry reported that also positive emotions can trigger TTS, called the “Happy Heart Syndrome” (17).

In an international registry, the clinical presentation of patients with “happy heart syndrome” was similar to those with “broken heart syndrome” (17). Symptoms such as chest pain or electrocardiographic parameters, laboratory findings, and the 1-year outcome did not differ in the two forms (17).

The possible mechanisms of football matches induced TTS are not fully understood and might be related to an exaggerated sympathetic stimulation, especially during very stressful matches like finals. The role of the insula in the recognition of emotions such as anger and happiness through interoceptive processing has been previously demonstrated (18). Also, genetically driven variation in the response of brain regions underlying human emotional behavior may affect the differential excitability of the amygdala to emotional stimuli (19).

Early studies have shown an association between watching football matches and an increased risk of an ACS (1, 2).

Interestingly, our study did not find an increase in the rates of ACS on the days of football matches involving Italy during the entire competition or during final and semifinal matches.

However, these findings are consistent with most previous studies (3, 4, 20).

However, there are no systematic updated data available on the role of acute emotional stress induced by football championships as a trigger for Takotsubo Syndrome in the contemporary era.

We showed for the first time, in a large national registry, a significant increase in TTS incidence during stressful football matches associated with a positive event as the victory of the UEFA Euro 2020 Football Championship finals by the Italian team. Moreover, we found a TTS prevalence of 30% among male patients, while recent studies reported a prevalence of TTS approximately in 10% of the male sex (12). This data, although apparently surprising, can be explained by the fact that soccer is usually more followed by a male audience than a female one, especially in Italy as reported in a recent survey of 1,029 respondents1

Only a few reports described a TTS after an acute emotional stress event watching football matches and were all triggered by negative events (5, 21, 22). Fijalkowski et al. described a TTS on a male after an acute emotional stress event caused by the defeat of his favorite soccer team during the Euro 2012 cup (5). Elamin et al. presented a case of a football supporter of Sheffield United who was admitted to the hospital with chest pain following a last-minute goal by the opposing team (21). Y-Hassan et al. reported a case in which a missed penalty kick triggered coronary death in the husband and TTS in the wife (22).

To date, no systematic studies or registries have shown an association between TTS and important football championships after positive emotional stress.

Limitations of the study

Our study has some limitations. First, we did not examine data on stroke, arrhythmias, and sudden death. However, sudden death is much less frequent than hospital admission for ACS.

Second, we assumed that patients with events on match days had indeed been watching the match. However, it is likely that the hospitalized patients have seen the matches considering the TV share over 21 million views during the finals in Italy.

Third, we do not have any information on the time of the onset of symptoms. However, by analyzing the effect of matches on the day of the match and the day after we avoided a misclassification, as some of the matches were watched in the evening and thus were miscounted on a control day.

Fourth, we have no data about recent (or concomitant) COVID-19 infection. Moreover, we have not performed a comparison with the previous year to avoid confounders related to the pandemic.

Fifth, we do not have any data on coronary angiography, CMR, IVUS or OCT findings and long-term follow-up.

Moreover, since the control period consisted of the days before and after the matches, it is unlikely that our results are due to the effects of unmeasured potential confounders such as temperature and pollution that were similar during the entire tournament.

The data of this national Registry demonstrated an association between the semifinal and final of the UEFA Euro 2020 Football Championship and TTS suggesting that it can be triggered by also positive emotions. Conversely, no differences were found in the incidence of ACS. Further prospective studies should be planned to assess the relative association risk of football matches and TTS.

The studies involving human participants were reviewed and approved by the Ethics Committee of the Magna Graecia University of Catanzaro, Italy. The patients/participants provided their written informed consent to participate in this study.

The Supplementary Material for this article can be found online at: https://www.frontiersin.org/articles/10.3389/fcvm.2022.951882/full#supplementary-material