The Institute for Health Protection of Mother and Child Serbia, Serbia

Background: Fasting plasma leptin levels reflect fat mass, but dynamic leptin responses to secretagogues, and the influence of race/ethnicity, have not been well studied. Here, we compared basal and stimulated leptin levels in relation to cardiometabolic risk and weight trajectories in black and white subjects.

Leptin regulates body weight and influences metabolic processes in rodents (1–3) and human beings (4–8). The analysis of plasma leptin levels in relation to human metabolic pathophysiology has focused largely on specimens collected under basal (fasting) conditions (9–13). The findings from such studies indicate that fasting leptin levels are directly correlated with measures of adiposity (9–11) in lean and obese subjects as well as in persons with diabetes (14). We and others have reported that administration of glucocorticoids results in significant increases in plasma leptin levels (15–19). Others have reported that prolonged insulin infusion also increases plasma leptin levels (20). Thus, glucocorticoids and insulin can be deployed as leptin secretagogues to probe the metabolic physiology and pathophysiology of dynamic leptin secretion. Given the many drawbacks of insulin (the need for injection, risk of hypoglycemia, and obligate need to coadminister glucose), oral glucocorticoid is a more convenient secretagogue for studying dynamic leptin secretion. The previous reports had utilized different doses of methylprednisolone (15), dexamethasone (dex) (16, 17), or hydrocortisone (18, 19) to demonstrate glucocorticoid-induced leptin secretion. In this report, we investigated leptin responses to a single, 2-mg dose of dex in African-American (black) and European-American (white) men and women with a broad range of adiposity measures. Our data indicate that augmentation of plasma leptin levels in response to a single oral dose (2 mg) of dex is a highly conserved trait that may convey information regarding cardiometabolic risk status and weight trajectories.

At baseline and annually, POP-ABC participants underwent physical examination, OGTT, and measurements of body fat (dual energy X-ray absorptiometry), blood lipids and other analytes, and leptin secretion. The POP-ABC study protocol was approved by the University of Tennessee Health Science Center Institution Review Board. All subjects gave written informed consent before the initiation of the study, which was conducted in accordance with the principles of the Declaration of Helsinki.

Basal and stimulated leptin secretion was assessed as previously described (14), with dex dose reduction from 4 to 2 mg. In brief, on day 1 of the test, participants arrived at the General Clinical Research Center (GCRC) in the fasting state for baseline blood sampling at 0800 h and were given a single 2-mg tablet of dex. Between 11:00 p.m. and midnight on day 1, participants ingested the 2-mg dose of dex and returned to the GCRC on day 2 for fasting blood sampling at 8:00 a.m. (8-h sample). After that, participants had their usual breakfast and lunch and returned for final blood sampling at 4:00 p.m. on day 2 (16-h sample). Study subjects were given written instructions to maintain their usual dietary and physical activity habits and avoid strenuous exercise for at least 3 days before the test.

Data are reported as means ± SD unless SEM is specified. Significance level was set as P < 0.05. Differences between groups were analyzed using unpaired t-tests and analysis of variance (ANOVA) for continuous variables and chi-squared test for discrete variables. General linear regression models were used to analyze the relationship between basal and stimulated plasma leptin levels and adiposity and cardiometabolic measures. A percentile plot was generated to display the spectrum of stimulated peak leptin responses for the entire study cohort, and to enable sensitivity analyses. All statistical analyses were conducted using SAS statistical software, version 9.3 (SAS Institute Inc., Cary, NC, USA). The level of significance was set at P < 0.05.

Table 1 shows the baseline characteristics of black and white participants. The gender distribution was similar in both groups. The mean age was lower and body mass index (BMI) higher in black than white subjects, but total and trunk fat mass were similar in the two groups. The ethnic difference in BMI was driven by higher values in black women: 31.9 ± 7.14 vs. 29.0 ± 7.66 kg/m2, P = 0.0043; the BMI was not significantly different in black men vs. white men (29.4 ± 7.68 vs. 28.1 ± 4.23 kg/m2) FPG, and serum triglyceride levels were higher in white than black participants, although glucose and lipid values were well within the normal ranges in entire cohort. 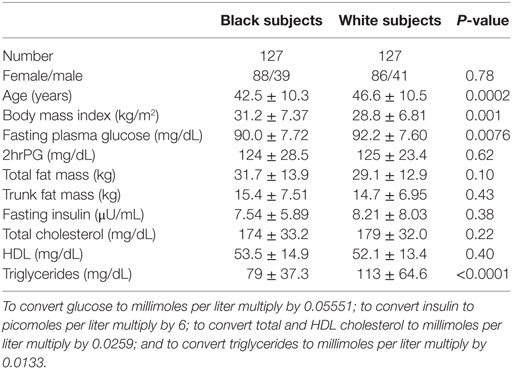 Owing to the known gender dimorphism in circulating leptin levels, plasma leptin data are presented separately for men and women (Table 2; Figure 1). The mean fasting plasma leptin level was higher in black women than white women (50.6 ± 47.7 vs. 39.5 ± 36.7 ng/mL, P = 0.004) but similar in black men and white men (12.4 ± 13.9 vs. 11.1 ± 9.57 ng/mL, P = 0.59) (Table 2). Following ingestion of the 2-mg dose of dex, the mean plasma cortisol levels were suppressed to <1.5 μg/dL in all subject groups at the 8- and 16-h sampling times (Figure 1A; Table 2). The sustained suppression of plasma cortisol levels reflects feedback inhibition of corticotropin release by exogenous glucocorticoid, which is prima facie evidence of dex ingestion by study participants. 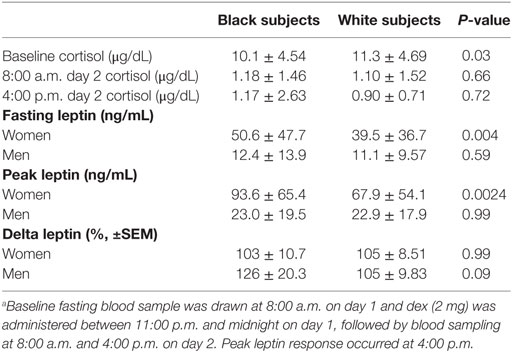 Table 2. Plasma cortisol and leptin levels before and after dexamethasone (dex) (2 mg).a 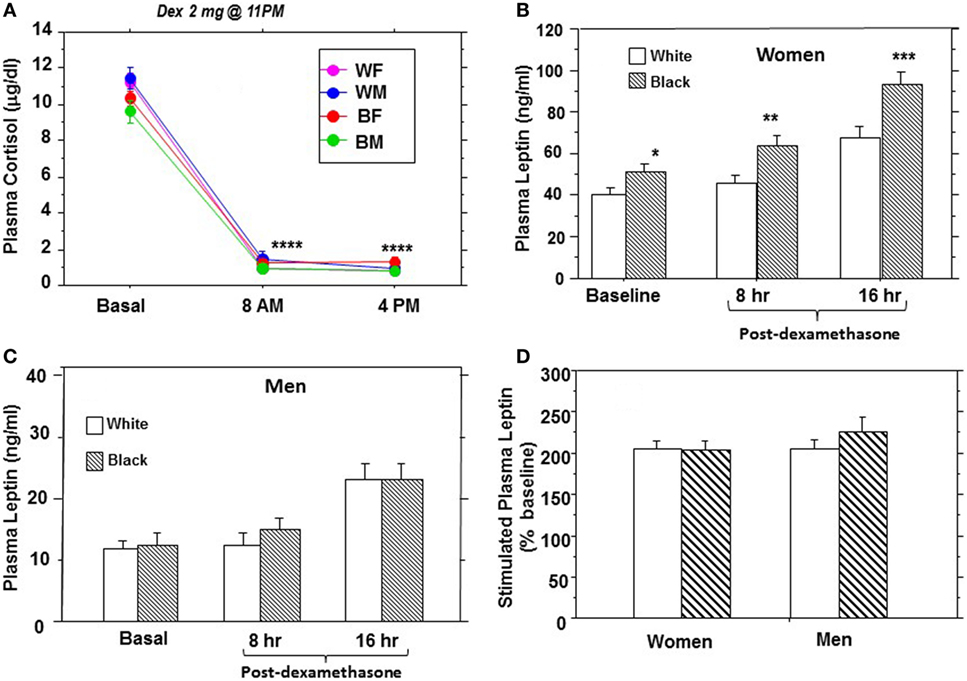 Being a natural history study, our POP-ABC participants did not receive any behavioral or pharmacological intervention for control of body weight or alteration of glucose levels. These free-living participants maintained their usual habits and often exhibited fluctuations in weight and body composition during serial measurement. We calculated the 1-year changes in weight and total body fat mass from enrollment (baseline) and evaluated the association of fasting and stimulated leptin secretion (assessed in year 1) with prospective changes in weight and fat mass in year 2. We found that fasting leptin levels had no significant relationship with 1-year change in weight (P = 0.34) and only a marginal relationship with 1-year changes total fat mass (P = 0.05) (Figures 2A,B). By contrast, peak stimulated leptin levels were modestly but significantly associated with 1-year trajectories in weight (r = 0.20, P = 0.0016) and total fat mass (r = 0.21, P = 0.0035) (Figures 2C,D). 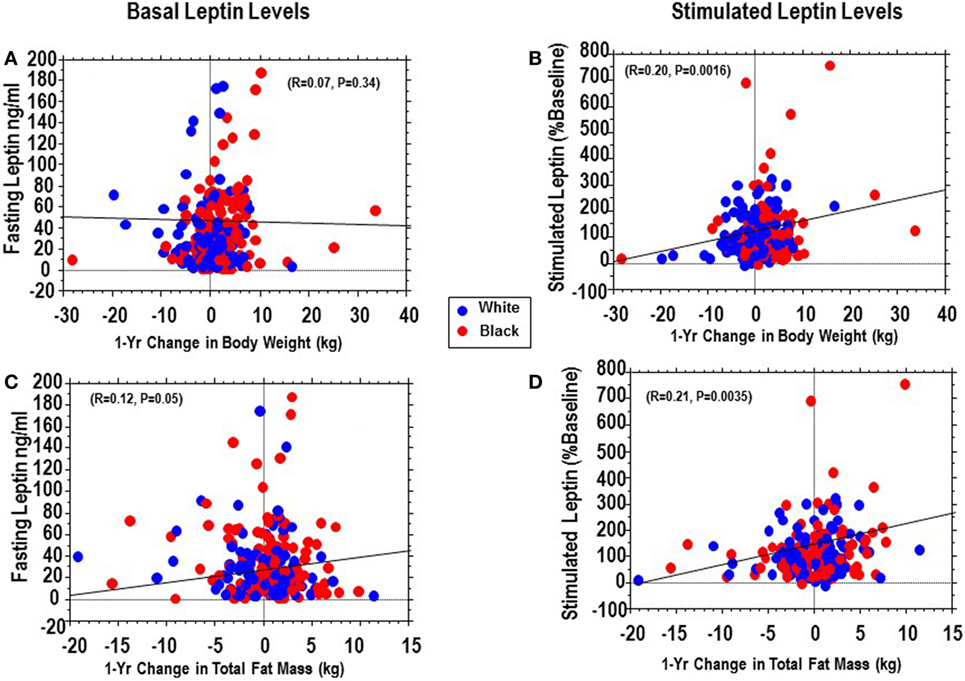 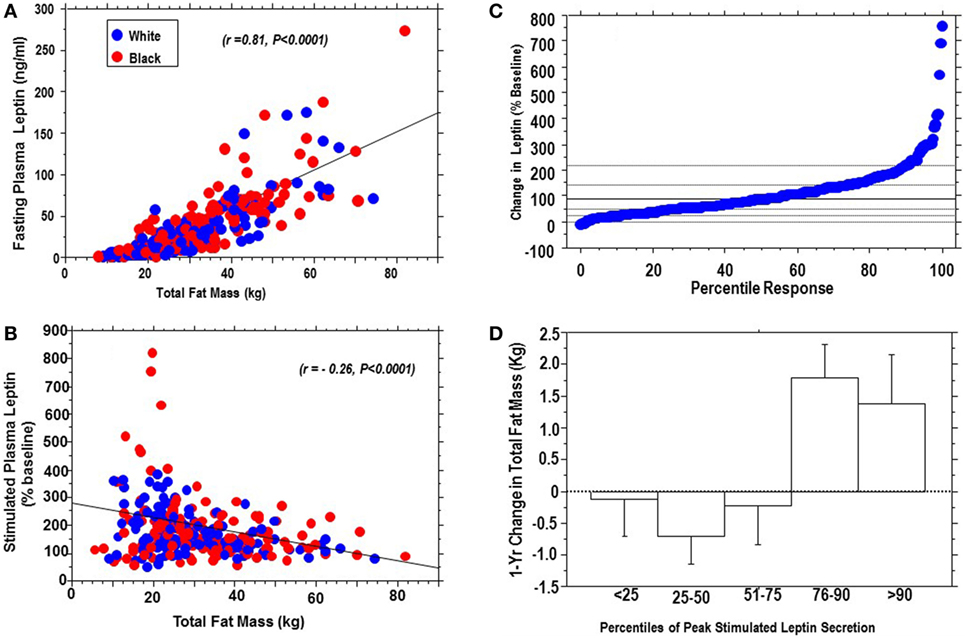 Despite more than 20 years of investigation, the exact role of leptin in human metabolic pathophysiology remains unclear. Leptin replacement is remarkably effective in treating rare forms of human obesity due to mutation of the leptin gene (4, 5). However, hopes of leptin therapy for common forms of obesity have not been fulfilled, although recombinant human leptin received approval by the U.S. Food and Drug Administration in 2014 for the treatment of generalized lipodystrophy (7, 24). The physiology and regulation of leptin also need to be fully clarified, as the notion of leptin as an anorectic, anti-obesity hormone has been expanded to emphasize leptin’s role as a rapid signal of starvation or energy deficit (25). Our previous studies focusing on the hormonal regulation of leptin in humans have established glucocorticoids as potent leptin secretagogues and have proposed that the glucocorticoid–leptin axis might be of metabolic relevance (14, 16, 18, 19, 26–28). The possible physiologic significance of glucocorticoid–leptin interaction is suggested by four related observations. First, the plasma leptin response to glucocorticoid has been demonstrated at physiological doses of hydrocortisone in humans (19). Second, glucocorticoid-induced hyperleptinemia is abolished by fasting (19, 29). Thirdly, inhibition of steroidogenesis by metyrapone decreases leptin production in humans (28, 30). Fourthly, glucocorticoid-induced hyperleptinemia has been reported to modulate anti-ingestive behavior in humans (27).

This report was an exhaustive analysis of basal and dynamic leptin secretion in a biracial cohort of otherwise healthy offspring of parents with T2D. Our findings confirm the well-known gender dimorphism in leptin levels (~3-fold higher in women than men). Although black women had higher basal and stimulated leptin levels than white women, the difference is accounted for by the higher BMI and fat mass among the former. Thus, the correlation between fasting leptin and body fat was identical (r = 0.81) in black and white subjects. Using a modification of our previous method, we demonstrated that the lower dose of dex (2 mg) stimulated leptin secretion by approximately the same magnitude compared with higher glucocorticoid doses (14, 16, 18). Our findings show definitively that a doubling of basal leptin levels is the expected peak response to glucocorticoid among healthy adults. Furthermore, there is no discernible evidence of gender or ethnic disparities when dynamic leptin secretion is expressed as a percentage of baseline values.

We observed an inverse correlation between stimulated leptin levels and total body fat, which contrasts with the well-recognized direct correlation between fasting leptin levels and adiposity. The mechanism for the inverse relationship is unclear. We propose that people with high body fat might be near maximal in their leptin secretory potential and, thus, limited in their capacity for mounting fold increases in leptin secretion (31). By contrast, people with lower body fat (and therefore low basal leptin levels) might be more capable responding more briskly to a response to leptin secretagogue. Another novel finding from the present study is the dissociation between basal and stimulated leptin levels in the prediction of future weight gain in our biracial cohort of African-Americans and European-Americans. A previous report had suggested that fasting plasma leptin levels might predict future weight gain in Pima Indians (32). That report was based on an analysis of fasting plasma leptin levels in 19 Pima Indians who gained weight and 17 who maintained their weight during approximately 3 years of follow-up (32). In our much larger sample of 254 subjects, we did not observe a significant association between fasting plasma leptin levels and future weigh change over a 1-year period. By contrast, we noted a weak but significant association between stimulated leptin levels and 1-year weight gain. We also found an inverse association between stimulated leptin levels and body fat at baseline. The latter finding suggests that the magnitude of leptin response to secretagogue might be a surrogate for adipocyte size and capacity for additional fat storage. Viewed in that light, obese, hyperleptinemic individuals who give a weak response to glucocorticoid stimulation might be signaling a plateau in their weight trajectory and adipocyte fat storage capacity (31). By contrast, heterogeneity in dynamic leptin responses among leaner individuals might convey information regarding differential adipocyte secretory/fat storage capacity, with implications for future weight gain. Indeed, our percentile and sensitivity analyses showed that individuals below the 75th percentile of stimulated leptin secretion maintained stable weight and body fat, whereas hypersecretors above the 75th percentile were more likely to experience weight gain. Further studies correlating dynamic leptin secretory status with morphological characteristics of adipocytes from fat biopsies might be informative. Similarly, longitudinal studies evaluating dynamic leptin secretion in relation to clinical cardiometabolic endpoints would also be valuable.

The POP-ABC study protocol was approved by the University of Tennessee Health Science Center Institution Review Board. All subjects gave written informed consent before the initiation of the study, which was conducted in accordance with the principles of the Declaration of Helsinki.

The authors are indebted to the participants who volunteered for this study and to the research nurses and staff of the University of Tennessee General Clinical Research Center.

Copyright: © 2018 Ebenibo, Edeoga, Owei and Dagogo-Jack. This is an open-access article distributed under the terms of the Creative Commons Attribution License (CC BY). The use, distribution or reproduction in other forums is permitted, provided the original author(s) and the copyright owner are credited and that the original publication in this journal is cited, in accordance with accepted academic practice. No use, distribution or reproduction is permitted which does not comply with these terms.