Background: Hypothyroidism is an important risk factor for cardiovascular diseases, and autoimmune thyroiditis (AIT) is the leading cause of hypothyroidism. Recent studies showed that even AIT patients with euthyroidism still had an increased number of early atherosclerotic lesions. However, the precise mechanism is not yet known. This study aimed to investigate the association of thyroid function, thyroid autoimmunity, and cardiometabolic risk factors in non-obese AIT patients with euthyroidism.

Results: The AIT patients had significantly lower free T3 and free T4 levels, and higher TSH, antithyroid peroxidase antibodies (TPOAb) and TgAb levels. The elevated levels of high sensitivity C reactive protein (hsCRP) and homeostasis model assessment of insulin resistance (HOMA-IR) were observed in the AIT patients than the controls [hsCRP: 0.65 (0.27–1.33) vs. 0.20 (0.03–0.74) mg/L; HOMA-IR: 2.78 ± 1.60 vs. 2.33 ± 1.49; all P < 0.05]. Thyroid function was not associated with metabolic parameters and inflammatory makers, while the TPOAb titer was positively associated with the HOMA-IR and hsCRP levels after adjustment for confounding factors (all P < 0.05). Multivariate regression analysis demonstrated that the TPOAb level was an independent influencing factor for the HOMA-IR and hsCRP levels (HOMA-IR: β = 0.058, P < 0.05; hsCRP: β = 0.108, P < 0.05).

Conclusion: The TPOAb level is associated with HOMA-IR and hsCRP levels independently of thyroid function in non-obese individuals. Mild deviation of thyroid function within the normal range, chronic inflammation, and insulin resistance may be the links between AIT and atherosclerosis in the non-obese population.

Autoimmune thyroiditis (AIT) is a common endocrine disease characterized by diffuse thyroid enlargement and lymphocytic infiltration (1, 2). AIT manifests in patients through different states of thyroid function, such as euthyroidism or subclinical or overt hypothyroidism (1). Subclinical or overt hypothyroidism is an important risk factor for cardiovascular diseases (3). Many studies, including our previous studies, found that hypothyroidism causes insulin resistance, dyslipidemia, and chronic inflammation and further contributes to the development of atherosclerosis (4, 5). Notably, evidence from recent studies has shown that even AIT patients in euthyroid still have increased number of early atherosclerotic lesions (6, 7). However, the precise mechanism has not yet been revealed. Previous studies have shown that euthyroid AIT patients have relatively higher TSH levels than controls, and the TSH levels were positively associated with insulin resistance (8–10). Moreover, elevated total cholesterol (TC) levels were also present in euthyroid AIT patients (11). However, these results are inconsistent, and most of this evidence comes from an obese population. Obesity is a primary risk factor for insulin resistance and a chronic inflammatory state, and also affects thyroid function (12–15). Therefore, obesity might influence the reliability of results. This study aimed to investigate the association of thyroid function, thyroid autoimmunity, and cardiometabolic risk factors in non-obese AIT patients with euthyroidism.

A standard questionnaire was used to collect information about each patient’s health status and medications. Height and weight were measured to the nearest 0.1 cm and 0.1 kg by the same trained group, respectively. Venous blood samples were obtained after overnight fasting. Blood samples of all participants were stored at −80°C. High-density lipoprotein cholesterol (HDL-C), low-density lipoprotein cholesterol (LDL-C), triglyceride (TG), and TC levels were measured by colorimetric enzymatic assays using an autoanalyzer (Hitachi 7170). Serum TC was measured by an enzymatic cholesterol oxidase reaction, TG by a glycerol lipase oxidase reaction, and HDL-C and LDL-C were measured by a direct assay. Fasting blood glucose (FBG) was measured by the glucose oxidase method, and fasting insulin (FINS) by the chemiluminescence method. High sensitivity C reactive protein (hsCRP) was measured with an immunonephelometric assay. Free T3 (FT3), FT4, and TSH were determined by electrochemiluminescence immunoassay using an Abbott Architect i2000 (Abbott Diagnostics, Abbott Park, IL, USA), and the intra- and interassay coefficient of variation was below 10% for FT3, FT4, and TSH. The serum concentrations of TgAb and TPOAb were detected by chemiluminescent immunoassay. For both TgAb and TPOAb, the intra- and interassay coefficient of variation was below 10%. BMI was calculated as the weight in kilograms divided by the height in square meters. Homeostasis model assessment of insulin resistance (HOMA-IR) was performed to evaluate insulin resistance according to the following formula: HOMA-IR = [FINS (μIU/mL)*FBG (mmol/L)/22.5] (16). Thyroid ultrasound was assessed by a well-trained ultrasound physician.

Normally distributed variables were expressed as mean ± SD, while variables with a skewed distribution, including TG, FINS, TSH, TPOAb, and TgAb, were given as median and upper and lower quartiles. Variables that were not normally distributed were log-transformed before analysis. The differences between two groups were analyzed by independent Student’s t-test or the Mann–Whitney U test. The proportions were analyzed using chi-square tests. The differences between groups were analyzed by ANOVA test. We also performed Pearson and Spearman correlation analyses. Bonferroni correction was further made for multiple correlations. Multivariate stepwise regression analysis was used to evaluate the relationship between parameters. All statistical analyses were performed with SPSS 17.0 (SPSS, Inc., Chicago, IL, USA), and the results were considered statistically significant with two-tailed analyses, P < 0.05.

Clinical Characteristics of the Control and AIT Groups 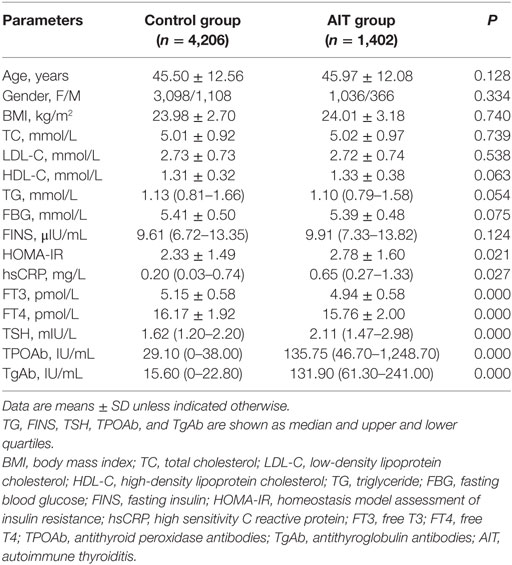 Table 1. Clinical characteristics of the control and AIT groups. 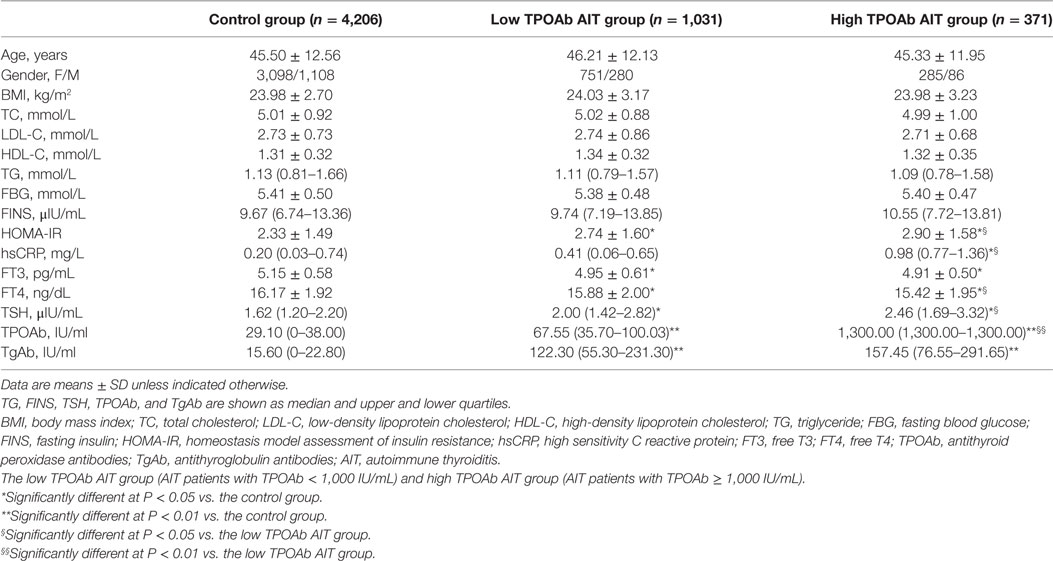 To further evaluate the relationship between TPOAb and HOMA-IR and hsCRP levels, we performed a multivariate regression analysis, including age, gender, BMI, TG, FT3, FT4, TSH, TPOAb, and TgAb. We found that the TPOAb level was an independent influencing factor for HOMA-IR and hsCRP levels (HOMA-IR: β = 0.058, P < 0.05; hsCRP: β = 0.108, P < 0.05).

This study showed that in a non-obese population with euthyroidism, the patients with AIT had significantly lower FT3 and FT4 levels, and higher TSH, TPOAb, and TgAb levels than the healthy controls. The elevated levels of hsCRP and HOMA-IR were also observed in the AIT patients as compared with the control group. Thyroid function was not associated with metabolic parameters and inflammatory makers, while the TPOAb titer was positively associated with the HOMA-IR and hsCRP levels after adjustment for confounding factors. Multivariate regression analysis demonstrated that the TPOAb level was an independent influencing factor for HOMA-IR and hsCRP levels.

Many epidemiological studies have shown that a certain percentage of AIT patients manifested as euthyroidism (1). Increasing evidence indicated that even AIT patients with euthyroidism still had an increased number of early atherosclerotic lesions (6, 7). This study showed that, although their thyroid function was within the normal range, the non-obese AIT patients had relatively lower FT3 and FT4 levels, and higher TSH than the controls. A recent cohort study from the euthyroid population showed that a low baseline FT4 level was associated with a high risk of the progression of coronary artery calcification over 4 years (18). An in vitro study also found that T3 inhibits the calcification and phenotype transformation of vascular smooth muscle cells (19). In vivo, recombinant TSH reduces endothelium-dependent vasodilation in patients with differentiated thyroid carcinoma (20). Furthermore, elevated TSH induces endothelial dysfunction in human umbilical vein endothelial cells by inhibiting eNOS expression (21). In euthyroid, patients who underwent coronary angiography, variation of thyroid function within normal range was associated with the severity of coronary atherosclerosis (22). Therefore, relatively lower FT3 and FT4 levels, and higher TSH levels might directly lead to the progression of atherosclerosis.

Autoimmune thyroiditis is characterized by diffuse apoptosis of thyroid follicular cells induced by abnormal cellular and humoral immunity (1, 2). TPOAb, an important antibody for humoral immunity, is mainly produced by lymphocytes in the thyroid (28, 29). AIT patients with increased TPOAb levels have a relatively higher risk for developing hypothyroidism (30). A significant correlation between the TPOAb levels and the number of lymphocytes in the thyroid gland was demonstrated (28). Our study showed that the TPOAb level was positively associated with hsCRP. Previous studies have demonstrated that TPOAb induces cellular cytotoxicity and the complement system and further deteriorated the inflammatory status (2, 28). On the other hand, increased inflammatory factors directly damage thyroid cells, induce more lymphocyte infiltration, and further stimulate the production of TPOAb (2, 29). Carotid intima media thickness (CIMT) is an indicator of early atherosclerosis (31). Several studies have found the positive association between CIMT and thyroid autoantibodies in euthyroid AIT patients (6). Thus, the chronic inflammation may be the link between thyroid autoimmunity and atherosclerosis in AIT patients.

It is well known that hypothyroidism is an important risk factor for metabolic disorders (32). Recently, increased interest has focused on the relationship between thyroid function and metabolic disorders in euthyroid population. This study showed that euthyroid, non-obese AIT patients had higher HOMA-IR levels when compared with the healthy controls. Previous studies have indicated that insulin is critical for a healthy endothelium by inducing the phosphorylation of PI3-K/Akt (33). The activation of the PI3-K/Akt pathway further increased the expression and phosphorylation of eNOS and promoted the production of NO (34). Thus, insulin resistance might contribute to endothelial dysfunction by impairing the PI3-K/Akt pathway and reducing the expression of eNOS and bioavailability of NO. Previous studies have shown that FT4 has an inverse association with HOMA-IR in a euthyroid population with obesity (8, 35). In addition, some studies have found a significant positive correlation between FT3 and hyperinsulinemia (36, 37). An association between TSH and HOMA-IR was also found in some other studies (35). However, most of this evidence came from studies of an obese population or small-scale studies. Obesity not only affects thyroid function but is also a primary risk factor for insulin resistance (12–15). Therefore, obesity might influence the reliability of results. This study showed that FT3 was positively associated with HOMA-IR, while FT4 levels were negatively associated with HOMA-IR. However, these associations lost their significance after adjustment for confounding factors. Consistently, a recent study found an association between thyroid function and metabolic parameters in obese patients with polycystic ovary syndrome (PCOS), while this association disappeared in non-obese PCOS patients (38). These results might suggest that the link between thyroid function and metabolic features is modulated by body weight. Although thyroid function had no relationship with insulin resistance, TPOAb levels were significantly associated with HOMA-IR levels. As mentioned earlier, TPOAb is associated with chronic inflammation. Thus, increased inflammatory status might contribute to increased insulin resistance in non-obese AIT patients with euthyroidism.

In a non-obese population with euthyroidism, the AIT patients had lower FT3 and FT4 levels, and higher levels of TSH, hsCRP, and HOMA-IR. The TPOAb level is associated with HOMA-IR and hsCRP levels independently of thyroid function. Mild deviation of thyroid function within the normal range, chronic inflammation, and insulin resistance may be the links between AIT and atherosclerosis in the non-obese population. More attention should be focused on AIT patients for cardiovascular disease even if they are euthyroid. And further prospective or intervention researches are needed to evaluate whether levothyroxine treatment will bring benefits in reducing atherosclerosis risk for the AIT patients with euthyroidism, especially in patients with high TPOAb titers.

All enrolled subjects provided written informed consent, and the protocol of this study was approved by the Ethics Committee of the Beijing Chao-Yang Hospital, Capital Medical University.

JL and GW conceived and designed the study and wrote the paper; JL, JF, YD, and GW performed the study; JL and JF analyzed the data.

10. Hainer V, Zamrazilova H, Aldhoon Hainerova I. [Are the thyroid hormones and thyrotropin associated with cardiometabolic risks and insulin resistance even in euthyroid subjects?]. Vnitr Lek (2016) 62:63–7.

Copyright: © 2018 Liu, Duan, Fu and Wang. This is an open-access article distributed under the terms of the Creative Commons Attribution License (CC BY). The use, distribution or reproduction in other forums is permitted, provided the original author(s) and the copyright owner are credited and that the original publication in this journal is cited, in accordance with accepted academic practice. No use, distribution or reproduction is permitted which does not comply with these terms.