Introduction: Does the endometrial thickness (EMT) at the time of follicle aspiration correlate with the pregnancy rate in unstimulated menstrual cycles?

Materials and Methods: This is a retrospective, observational single center study.105 women with regular menstrual cycles undergoing their first NC-IVF cycle with an embryo transfer were analyzed. Clinical pregnancy and live birth rates were calculated and data were adjusted for women's age, cycle day of follicle aspiration and body mass index (BMI).

Conclusion: Thin endometrium should also be considered as an independent negative prognostic factor for achieving pregnancy in women without ovarian stimulation.

The importance of the endometrium for the development and maintenance of pregnancy is clearly proven. However, it is unclear which endometrial factors are of relevance (1). Histological examination in couples who wish to conceive makes little sense as a biopsy would be necessary. In transvaginal ultrasound evaluation endometrial thickness, the echo pattern and endometrial perfusion are evaluated (2). Ultrasound analysis of endometrial thickness (EMT) is most commonly performed, as this is the easiest and best reproducible technique.

The significance of the endometrial thickness has been investigated in numerous studies and in meta-analyses. The investigations are essentially limited to in vitro fertilization treatments (IVF) with high-dose stimulation therapy and intrauterine insemination treatment (IUI) with different ovarian stimulation regimes.

In women undergoing IUI with low dose stimulation, such a relationship does not appear to exist. In a recent meta-analysis with IUI treatments combined with a gonadotrophin, clomifene citrate, or aromatase inhibitor stimulation, there was no evidence of a difference in EMT between women who conceived and women who did not conceive (MDrandom: 0.51, 95% CI: −0.05, 1.07) (8).

Because ovarian stimulation treatments were used, the results of these studies cannot be transferred to the unstimulated situation. As a result, the study findings have only limited use in a fertility work-up for infertility to assess the relevance of the endometrium as a cause of sterility.

Based on this, we investigated the pregnancy rate as a function of the endometrial thickness using the Natural Cycle IVF (NC-IVF) model, in which no ovarian stimulation except ovulation induction with human chorionic gonadotropin, hCG, and luteal phase progesterone supplementation was administered.

Since strict inclusion and exclusion criteria such as the transfer of only one embryo were defined and thus numerous confounders on the pregnancy rate could be excluded, this may be the first study which also allows a cautious estimate of the importance of endometrial thickness for a pregnancy event in a spontaneous cycle.

The retrospective, observational single center study was performed between 2011 and 2016. A total of 225 women, 18–42 years of age with regular menstrual cycles (24–32 days) and basal FSH concentrations <10 IU/L undergoing their first IVF cycle treatment with transfer of a single embryo were screened. Women had been offered both, NC-IVF and conventional IVF but decided themselves which therapy they preferred. Women without a transfer, with endometriosis >rAFS II° (revised American Fertility Society) (as diagnosed by laparoscopy or clinical and ultrasound analysis), with fibroids as diagnosed by ultrasound or in case ultrasound was not conclusive by hysteroscopy and with sperm collection by testicular sperm extraction (TESE) were excluded.

NC-IVF patients were monitored using ultrasound and analysis of luteinizing hormone (LH) and E2 concentrations. When the follicle diameter reached at least 18 mm and the E2-concentration was expected to be ≥800 pmol/L, 5000 IU of hCG (Pregnyl®, MSD Merck Sharp & Dohme GmbH, Lucerne, Switzerland) were administered and patients were scheduled 36 h later for oocyte retrieval. EMT was measured at the time of oocyte aspiration by different physicians and different ultrasound machines. Endometrium thickness was measured in mm without decimal numbers in our clinical routine as intraindividual and interindividual variations did not justify a more precise measurement. Follicles were aspirated without anesthesia and without analgesia using 19G single lumen needles (220 mmHg) as described elsewhere (9). After aspiration, follicles were flushed and aspirated 3 times each using 2–5ml flushing medium with heparin (SynVitro® Flush, Origio, Berlin, Germany). The flushing volume was adapted according to the size of the follicles. Fertilization was achieved by standard ICSI in all cases. Embryos were transferred on day 2 or 3 after aspiration as long term culture was not required with only one embryo. Women received luteal phase support with vaginal micronized progesterone. EMT at the time of follicle aspiration as well as biochemical and clinical (defined as ultrasound detection of an amniotic sac) pregnancy rates and live birth rate were analyzed per embryo transfer.

Endometrial thickness was first considered as a categorical variable and therefore women were divided into two endometrial thickness groups (≤7 mm vs. >7 mm). Patients' baseline characteristics were compared for quantitative variables by using the t-test, or if normality assumption was not satisfied, by non-parametric Wilcoxon-test. For qualitative variables (cause of infertility), the Chi-square test was used or by Fisher's exact test when the sample size was small.

Clinical pregnancy and life birth rate where compared using a logistic regression. For each outcome, we first assessed the crude (unadjusted) association between EMT categories and the outcome. We then adjusted the model for potential confounders by including women's age, day of follicle aspiration and BMI in the model. The cause of the infertility was not considered as we had been shown in another, not yet published, study, that the cause of infertility is not a prognostic factor in NC-IVF. Endometrial thickness was then considered as a continuous variable and its effect on pregnancy and on live birth was further analyzed using logistic regression. For each outcome, we first assessed the crude (unadjusted) and adjusted association between EMT and the outcome, using endometrial thickness as a linear term. Then, we examined the linearity of the effect of EMT on the outcomes by fitting a crude and adjusted quadratic regression model and by testing whether the addition of a quadratic term significantly increased the fit of the model. Models were compared using likelihood ratio tests. P-value and the confidence interval of models parameters were estimated using the normal approximation. 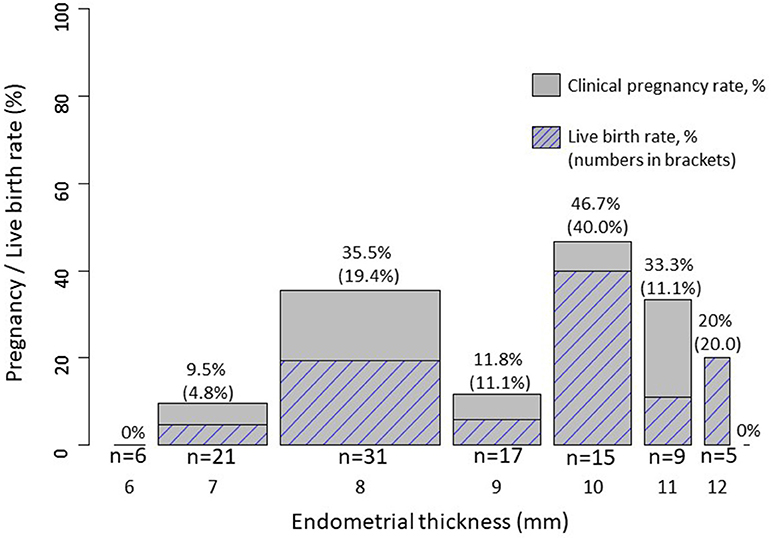 Figure 1. Clinical pregnancy (not hatched) and live birth (hatched) rates as a function of endometrial thickness. The bar width is proportional to the number of women in each category. 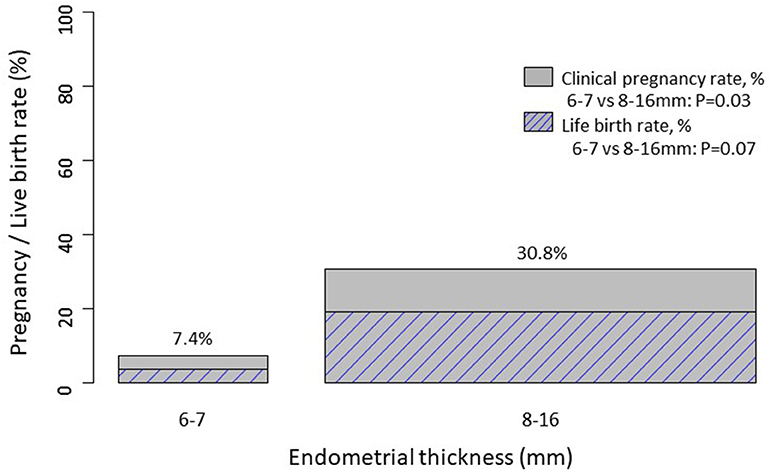 Figure 2. Clinical pregnancy rate (not hatched) and live birth (hatched) rates in women with endometrial thickness ≤7 mm vs. >7 mm. The bar width is proportional to the number of women in each category.

This study described for the first time the association of pregnancy rates with endometrial thickness in unstimulated menstrual cycles with fresh embryo transfers. The evaluation was adjusted for the main factors that could influence the chance of pregnancy (age) (10) and the EMT (day of aspiration and BMI) (11).

To minimize the influence of possible influencing variables, the investigation was carried out using 105 NC-IVF cycles, in which–as in almost all NC-IVF cycles–only one embryo was transferred. Different numbers of embryos would not have allowed a comparison of pregnancy rates. However, it needs to be noted that first we performed a retrospective analysis and second that the strict inclusion and exclusion criteria resulted in a limited number of participants. This might be a reason why significance was only reached for pregnancy but not for live birth rate.

Endometrium thickness was analyzed by several physicians using different ultrasound machines. Therefore, and due to the intra und interindividual variations of endometrial measurements, EMT was analyzed without decimal numbers, which could have affected the precision of the analysis.

We defined the ultrasound detection of an amniotic sac as a clinical pregnancy, which might explain the high miscarriage rate. However, the miscarriage rate could not be allocated to a specific endometrial thickness.

The reason for the reduced pregnancy rates in patients undergoing gonadotrophin-stimulated IVF therapies with an endometrial thickness ≤ 7 mm compared to an endometrial thickness >7 mm is unclear. It has been speculated that basal layer endometrial oxygen concentrations are increased in patients with a thin endometrium, which might be detrimental for embryo implantation (13). It was further speculated that embryos developing in vitro are especially susceptible to this higher oxygen exposure (8).

In hormone-stimulated IUI treatments, there is no significant correlation between the endometrial thickness and the pregnancy rate (8). As a possible reason for this, it was discussed that embryos develop more robustly in vivo and are less susceptible to high oxygen exposure (8). However, this explanation is purely hypothetical. Therefore, it could be speculated that in hormone-stimulated IUI treatments a thin endometrium is associated with lower pregnancy rates, but that this association could not be detected. In the meta-analysis by Weiss et al. (8), the primary analysis showed a significantly thinner endometrium in women who did not conceive (MD: 0.48, 95% CI: 0.18, 0.77). The significance was only lost when the calculation was performed using a random effects model (MD random: 0.51, 95% CI: −0.05, 1.07) which was chosen due to the heterogeneity of studies. This raises the question of whether a thin endometrium is also associated with lower pregnancy rates in stimulated IUI treatments; however, this association could not be detected due to the heterogeneity across the studies.

On the other hand, the question arises of how relevant a reduced pregnancy rate with a thin endometrium really is. Of the 6 non-pregnant women in our study with an endometrial thickness of 6 mm, 3 women became pregnant later on. Thus, the clinical relevance of a thin endometrium without a recognizable cause such as multiple curettages etc., is questionable.

If a patient's endometrium is very thin, and if this may be a possible cause of infertility, the question of possible therapeutic options arises. Stimulation with estrogens can hardly be carried out in a spontaneous cycle, since high estrogen concentrations reduce FSH release and inhibit folliculogenesis and also impair endometrial function (16). Santamaria et al. (17), developed a treatment with bone marrow-derived stem cells, which seems to increase the chances of pregnancy in refractory Asherman's syndrome and endometrial atrophy. Whether such a complex and still experimental therapy is useful in cases with physiologically thin endometrium is questionable, since in such cases the endometrium is thinner but presumably functionally intact.

The differences of the studies are barely explainable. It possibly concerns physiologically different endometrial function and IVF activity states, which do not allow a comparison of the different treatments as the endometrium is likely to be more proliferated and oedematous with gonadotrophin stimulation. It is also possible that the differences are due to the low number of patients in our study which can be considered a weakness of our study. Since the inclusion and exclusion criteria were very strict to be able to examine a patient population as homogeneously as possible, the patient numbers are limited.

MvW designed the study, analyzed the data, and prepared the manuscript. MvW, MF, VM, PS, and AK collected data. MF prepared the data. MR and GG performed the statistics. All authors contributed to the data collecting, interpretation of the results, and the revision of the final manuscript.

The study was supported by an unrestricted research grant from IBSA Institut Biochimique SA.

We would like to thank Dr. Elizabeth Kraemer for the linguistic revision and correction of the manuscript.

Copyright © 2018 von Wolff, Fäh, Roumet, Mitter, Stute, Griesinger and Kohl Schwartz. This is an open-access article distributed under the terms of the Creative Commons Attribution License (CC BY). The use, distribution or reproduction in other forums is permitted, provided the original author(s) and the copyright owner(s) are credited and that the original publication in this journal is cited, in accordance with accepted academic practice. No use, distribution or reproduction is permitted which does not comply with these terms.