Objective: In recent decades several studies reported significant changes in the mortality and morbidity of patients with type 2 diabetes. In this Hungarian nationwide study, we assessed the changes of mortality and cardiovascular risks comparing a group of patient diagnosed during the two periods of 2001–2004 and 2010–2013.

Research Design and Methods: We identified patients with type 2 diabetes recorded in the database of the Hungarian National Health Insurance Fund aiming to assess changes of risks for all-cause mortality, myocardial infarction, and stroke during the follow-up periods of 48 months.

Conclusions: An increased risk for stroke followed by a sharp decrease, and an unchanged risk for myocardial infarction in the Hungarian population with type 2 diabetes possibly resulted in a mild decrease of all-cause mortality between 2001 and 2013.

In recent years several reports have been published demonstrating significant changes in the risks of diabetes mortality and morbidity (1–4).

In another real-world-evidence-based study evaluating all-cause mortality and cardiovascular morbidity (myocardial infarction, stroke) risk of the U. S. population between 1990 and 2010, similar improvement in all cardiovascular parameters were confirmed. The largest decrease was detected in acute myocardial infarction [−67.8%; 95% confidence interval (CI), (−76.2 to −59.3)] and significant changes were also seen in the rate of stroke and amputations (−52.7 and −51.4%, respectively) (6).

We decided to examine the first 4 years of the last two decades to compare changes of morbidity and mortality risks in Hungarian patients with diabetes during the periods of 2001–2004 and 2010–2013.

This study was approved of by the Regional Research Ethics Committee of the Medical Center, University of Pécs, Hungary (study license number: 6962/2017.) and received no commercial sponsorship. The study protocol was also reviewed and confirmed by the National Health Insurance Fund (NHIF, ID: S04/161/2016).

Data of type 2 diabetic patients undergoing antidiabetic therapy between January 1, 2001 and December 31, 2004 (n = 274,109) or between January 1, 2010 and December 31, 2013 (n = 152,678) were extracted from the database of the National Health Insurance Fund in the form of anonymized, aggregated patient data, and were considered as type 2 diabetes if receiving antidiabetic treatment (ATC A10), however not matching previously detailed and published criteria of type 1 diabetes (7) or not having an ICD code for PCOS and gestational diabetes (Figure 1). 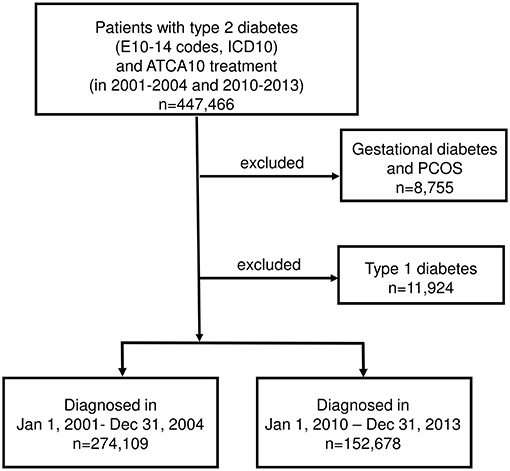 The onset of diabetes was defined with the reference to the first occurrences of diabetes according to the International Classification of Diseases (ICD) code in the database, or at the start of the first antidiabetic treatment.

The data source included information on mortality from any causes, because this database does not differentiate between the causes of death, and provides data for cardiovascular complications of diabetes like incidence of myocardial infarction and stroke. Codes taken from the ICD (9 and 10th Revisions) were used supporting diagnoses of acute myocardial infarction, as well as stroke from Jan 1, 2000 onward.

All-cause mortality and cardiovascular morbidity (myocardial infarction: ICD-10 I21-24 in in-patient records and ischemic and hemorrhagic stroke: ICD-10 I61-63, G4630, G4640, G4580, G4590 in in-patient records) were assessed for 48 months in both groups, following the 2nd month after the onset of diabetes of both periods (Jan 1, 2001 and Jan 1, 2010). At least 1 year of screening period was conducted for all patients before the onset of diabetes, aiming to identify prior myocardial infarction or stroke event.

The Cox regression model was used to determine the hazard ratio of death, MI and stroke in patients diagnosed during 2001–2004 and 2010–2013. The model was adjusted for baseline differences of gender and age group (0–18, 19–30, 31–40, 41–50, 51–60, 61–70, 71 years). As the proportional hazard assumption was not satisfied in the model, we were using a time-dependent covariate: a linear function of time from diabetes onset for group 2010–2013 was included in the model. In this case, the Cox model estimates the hazard ratio as a continuous function of time.

Although the MI time dependency was not significant, we integrated it into the model to show the mild observed changes.

Data were available for our analysis following October 31, 2014 as a follow-up period. We followed the patients from diagnosis to the event or death or till the end of a 48 months long follow-up period.

The risk during first month was much higher, probably because diabetes was diagnosed just at the occurrence of the event. To eliminate the possible bias, we started the follow-up after the first month following the diagnosis.

Patient characteristics are shown in Table 1. The patients of the two time-periods differed in all parameters except for the prevalence of prior myocardial infarction. 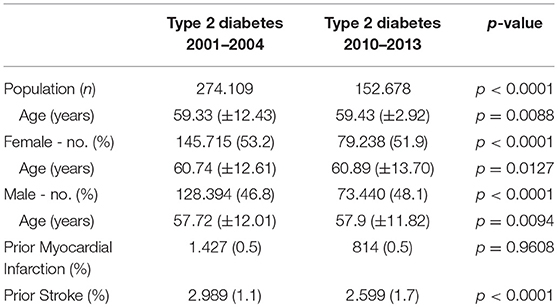 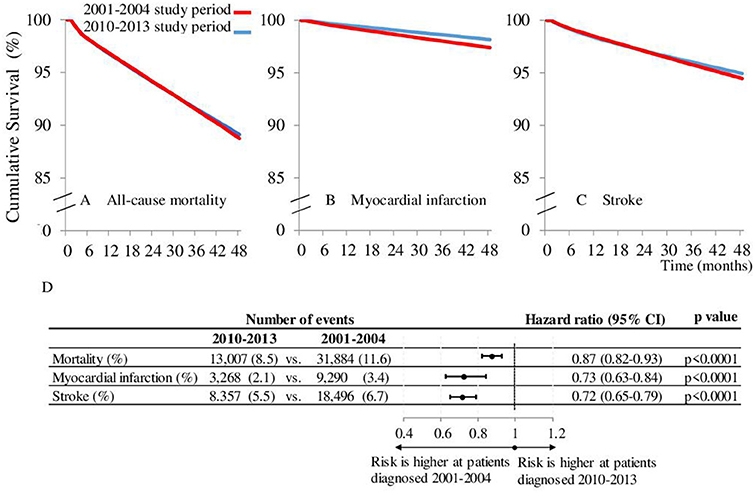 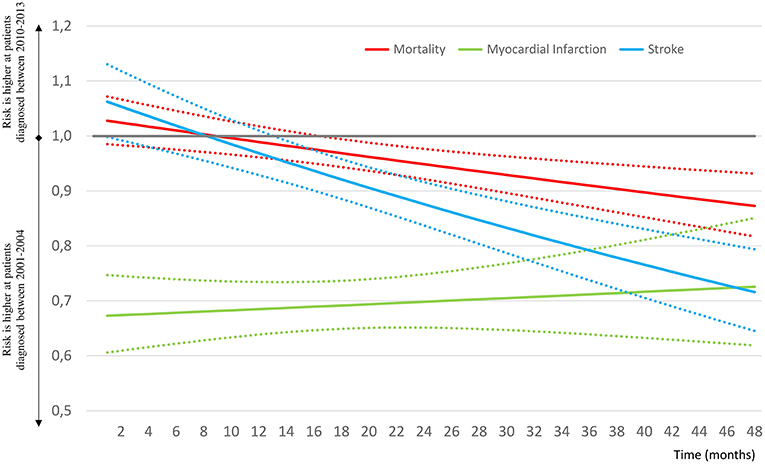 Figure 3. Changes of hazard ratios of all-cause mortality, myocardial infarction and stroke by month from diagnosis, comparing type 2 diabetes patients diagnosed during 2010–2013 vs. 2001–2004. The continuous lines represent the mean of HR, the dotted lines the 95% CI values.

The aim of our study was to assess mortality and cardiovascular risks in a Hungarian population of type 2 diabetic patients, comparing two time periods of 2001–2004 and 2010–2014.

The two main findings of our study can be summarized as follows:

ii. Surprisingly, 10 years after the start of the follow-up period of 2001–2004 an increased risk for stroke could be identified in 2010. During the follow-up, a fast decrease of stroke risk could be documented. As expected, the risk for myocardial infarction was lower in 2010 than in 2001. The slope of the risk-curve of myocardial infarction was unchanged during the study period.

Due to our study design, there are no comparable data in previous papers about all-cause mortality, myocardial infarction, and stroke. According to our method, not the whole available (2001–2013) dataset had to be used but just a part of it (from 2001 to 2004 and from 2010 to 2013) as shown in Figure 1. However, this might be considered as a limitation of our study, as it may not be known what happened to the parameters studied in the period between 2004 and 2010.

Indeed, our data reveal that the relative risk of stroke increased (6.2%) between 2004 and 2010 in the Hungarian population with type 2 diabetes, which resulted in a significantly higher risk at the diabetes onset in 2010 compared to 2001. The explanation of this increase remains unknown, however, this surprising evidence needs further assessment, even in the non-diabetic Hungarian population.

Similarly to other papers (4–6, 8), in our study we were able to detect a decreased risk for myocardial infarction at the time of the diagnosis of type 2 diabetes between 2001 and 2010 (risk reduction was 32.7%, Figure 2D), which did not change significantly during the 48 month follow-up period.

Recently published comprehensive analysis of population-based studies from several countries including the UK, USA, Canada, and South Korea, reported a significant risk reduction of stroke and myocardial infarction in the last two decades in parallel with a relevant decrease of diabetes mortality. Harding explains these declines in the rates of diabetes complications with multifactorial causes, improving relevant risk factors of the population and development of prevention strategies, CVD treatment procedures and treatment options (9).

The increased risk of stroke and the decreased risk of myocardial infarction might result in the unchanged risk of all-cause mortality at the diagnosis of diabetes, comparing the years 2001 and 2010. The significant drop of risk of stroke and the continuously low risk of myocardial infarction during the follow-up might be responsible for the mild amelioration of all-cause mortality risk at the 48th month.

Using a screening period for stroke and myocardial infarction from January 1, 2000 may lead to a certain level of bias, as patients diagnosed later with T2DM have a longer period for prior event screening. Nevertheless, prior events do not constitute a part of any statistical analyses for the 48 months long follow-up period.

In conclusion, as a novel observation, our study has provided evidence that the risk for stroke in the Hungarian population with type 2 diabetes increased between 2004 and 2010, whereas the risk for myocardial infarction remained unchanged during the same period. Possibly as a results of these changes, a mild amelioration of the risk of all-cause mortality has been documented.

GR and ZA-T are employed by RxTarget Ltd. The funder played no role in the study design, the collection, analysis or interpretation of data, the writing of this paper or the decision to submit it for publication.

Copyright © 2019 Kiss, Rokszin, Abonyi-Tóth, Jermendy, Kempler and Wittmann. This is an open-access article distributed under the terms of the Creative Commons Attribution License (CC BY). The use, distribution or reproduction in other forums is permitted, provided the original author(s) and the copyright owner(s) are credited and that the original publication in this journal is cited, in accordance with accepted academic practice. No use, distribution or reproduction is permitted which does not comply with these terms.