Prenatal testosterone and estrogen levels are suggested to influence the formation of the second to fourth digit ratio (2D:4D ratio), with high environmental levels of androgens during fetal life being associated with a low 2D:4D ratio (1–3). However, this concept has recently been debated (4–7). The digit ratio, proposed as a sexually dimorphic trait (2, 8, 9), is believed to be set during the first trimester of fetal development (2, 10) and does not change substantially with age (9). Furthermore, the 2D:4D ratio has been associated with Differences of Sex Development (DSD) (11, 12).

The digit ratio has also been suggested to be related to physical performance (13, 14). Previous studies have shown that male athletes have a lower 2D:4D ratio than non-athletes (15–19). However, only a few previous studies have investigated the digit ratio in female athletes in comparison to controls (15, 19–21). An association between the 2D:4D ratio and physical performance have been demonstrated in female athletes for alpine skiing (18), endurance running (22) fencing (23) and rowing (24). Similarly, positive correlations between the 2D:4D ratio and physical fitness (25), and sporting ability (26) have been demonstrated in women taking part in leisure sports. These reports are either based on rather small study groups and/or not including populations of Olympic athletes.

Androgens are considered beneficial for athletic performance by exerting positive effects on muscle tissue, erythropoiesis, immune system, and behavioral patterns, and may also contribute to a decreased risk of injuries and increased health status in athletes (27). In women, the active androgens testosterone and dihydrotestosterone (DHT) are synthesized in the ovaries and the adrenal glands, and by conversion in peripheral tissue of precursor androgens produced in the adrenal cortex, such as androstenedione (A4), dehydroepiandrosterone (DHEA), its sulfate (DHEAS) and 5-androstene-3β, 17β-diol (5-DIOL) (28). Androgens are finally mainly metabolized by uridine diphospho (UDP)-glucuronosyl transferases (UGTs) and to some extent by sulfotransferases (SULTs) and excreted in urine (29).

We have recently published data showing that female Olympic athletes have higher levels of serum androgen precursors compared to controls and that serum androgens are positively associated with physical performance in the athletes (30). These results are of relevance for the ongoing discussion regarding hyperandrogenism in female athletes (27). Adult serum androgens have also been studied in relation to the 2D:4D ratio in non-athletic populations of men and women, demonstrating inconclusive results (31, 32). No previous studies have examined the 2D:4D ratio in relation to the androgen profile in both serum and urine, as well as physical performance in female top athletes.

The aim of the present study was to investigate the 2D:4D ratio in female Olympic athletes and untrained controls, and to study the 2D:4D ratio in relation to the androgen profile in serum and urine and physical performance in the athletes.

The present study included a representative population of Swedish female Olympic athletes (n = 104) participating in the summer or winter Olympic games, and 117 controls, for whom digit measurements were obtained (30). The controls were age- and body mass index (BMI)—matched, having a maximum of 2 h endurance and/or strength training per week and no prior participation in elite level competition. All participants were > 18 years of age. Olympic athletes were recruited in connection with pre-Olympic training camps and controls recruited via advertisement (recruitment was conducted from November 2011 to April 2015). The subjects were investigated at the Women's Health Research Unit, Karolinska University Hospital or in connection with pre-Olympic training camps. All participants filled out a general health questionnaire including training hours per week, and hormonal contraceptive use and for the athletes' information concerning sport discipline, age at training debut and age at elite level debut was obtained. Data on menstrual function was collected via questionnaire and confirmed by measurement of serum hormones for participants not using hormonal contraceptives. Blood- and urine samples were collected in a fasted, rested state, between 07.00 and 10.00 am and stored at −20°C until further analysis.

The project was approved by the Regional Ethics Committee (EPN 2011/1426-32). Informed written consent was obtained from all participants.

Digit measurement expressed in millimeters (mm) was performed for digit two (2D) and digit four (4D) (Figure 1) using a Vernier digital caliper 0–150 mm (USA, Cocraft) with a precision of 0.01 mm. Digit length was directly measured from the mid-point of the proximal crease of the proximal phalanx to the distal tip of the distal phalanx for 2D and 4D (9, 15) on both left (n = 103 athletes, n = 116 controls) and right hand (n = 104 athletes, n = 117 controls). The 2D:4D ratio was calculated by dividing 2D length by 4D length. In addition, right minus left 2D:4D ratio (Dr-l), suggested as an additional negative marker for prenatal testosterone, was calculated (2). The digits were independently measured by two raters. For rater A, the intraobserver agreement was 0.90 for right hand and 0.90 for left hand. For rater B, the corresponding intraobserver agreement was 0.93 and 0.96, respectively. The inter-rater correlation was 0.87 for the right hand and 0.85 for the left hand (33). 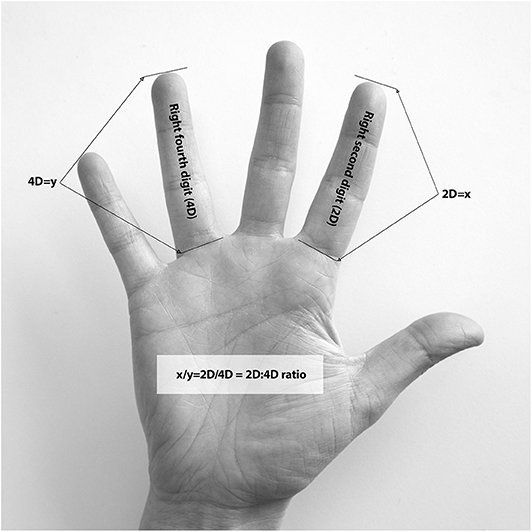 Figure 1. Measurement and calculation of the second to fourth digit (2D:4D) ratio.

For 93 athletes, urinary samples were obtained and urinary levels of conjugated (glucuronide and sulfated) androgens [testosterone (T-G, T-S), epitestosterone (EpiT-G, EpiT-S), androsterone (ADT-G, ADT-S), etiocholanolone (Etio-G, Etio-S), DHEA-G, DHEA-S, 5α-androstane-diol (5αAdiol-3G and 5αAdiol-17G) and 5β-androstane-diol (5βAdiol- 3G and 5βAdiol-17G)] were determined by LC-MS/MS as previously described (35) at the accredited doping laboratory, Department of Laboratory Medicine, Karolinska Hospital Huddinge. Specific gravity (SG) was measured for all urine samples by a Digital Urine SG Refractometer (ATAGO UG1, Tokyo, Japan). Using a correction formula, Ccorrected = Cmeasured * ((1.020–1)/(SG−1)), each sample was corrected to a specific gravity of 1.020, adjusting for urine dilution. Limit of detection (LOD) was estimated to be below 0.4 μg/mL for all analytes. For two athletes a urine sample was not obtained and for nine athletes the amount of urine was insufficient for analysis. Testosterone:epitestosterone (T:E) ratio was calculated by dividing testosterone glucuronide (T-G) by epitestosterone glucuronide (EpiT-G).

Statistical analyses were performed using Statistica™ 13 software (Statsoft® Inc., Tulsa, OK, USA). Continuous data was presented as mean ± SD or as median and interquartile range (25th−75th percentile) depending on distribution. Comparison of the 2D:4D ratio and body composition between groups was performed using the student's t-test. The proportion of women using hormonal contraceptives and having menstrual dysfunction was calculated by Chi-Square test and type of sport by Fisher's exact test. Effect size for continuous variables was calculated using Cohen's d and for categorical variables with Phi = √(Chi-2/n). Correlations were evaluated by Spearman's rank- order correlation or Pearson's correlation. P-values < 0.05 were considered significant.

Female athletes and controls were similar regarding age and BMI (Table 1). As expected, training hours/week was significantly higher among athletes compared to controls (Table 1). Age at training debut was 9.34 ± 4.74 years and age at elite debut was 17.56 ± 3.32 years for the athletes. As previously published, hormonal contraceptive use was similar between groups, but menstrual dysfunction was significantly more common among female athletes compared to controls (30). Furthermore, the Olympic athletes demonstrated a more anabolic body composition, including higher total BMD, lower body fat percent and higher amount of lean mass compared to the controls (30) (Table 1). In addition, as previously published, the athletes had significantly lower levels of estrone and higher serum levels of the androgen precursors DHEA and 5-DIOL than controls (30). However, both groups had serum steroid levels within the normal range (30). 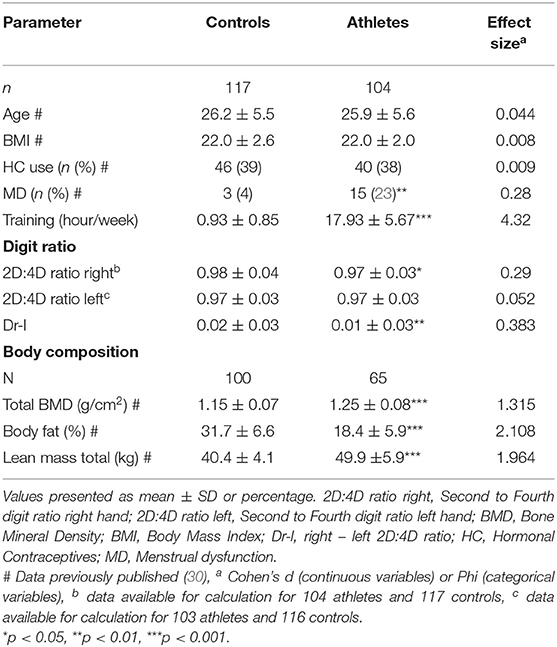 2D:4D Ratio in Relation to Serum and Urinary Androgen Levels in Athletes and Controls 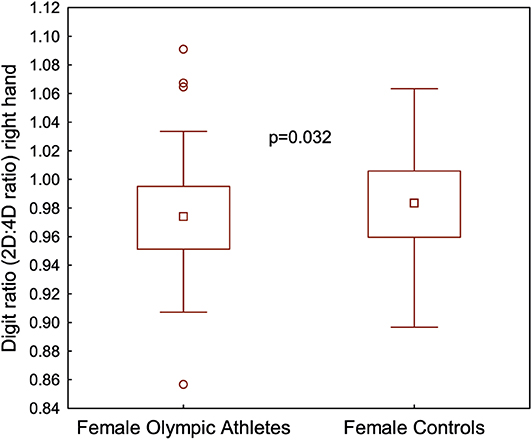 To our knowledge, this is the first study investigating the 2D:4D ratio in relation to both the serum and urinary androgen profile and physical performance in female top athletes. We found a lower 2D:4D ratio right hand, suggesting a higher prenatal androgen exposure, in female Olympic athletes than untrained controls. In addition, we found negative correlations between the 2D:4D ratio and the urinary steroid profile, and both these variables correlated significantly with physical performance including strength tests and middle-distance running in the female Olympic athletes.

Few previous investigations (15, 19–21) have reported data on the 2D:4D ratio in female athletes compared with controls. These studies have been performed in female athletes at national level (20), varsity athletes (non- elite athletes) (15), college tennis players (21) and youth handball players (19) demonstrating a significantly lower digit ratio for the athletes compared to controls. However, our study is the first including a large number of female Olympic athletes and untrained controls. In agreement with most previous studies, we found significant differences in the 2D:4D ratio only for the right hand (15, 19, 21). It has been demonstrated that the right hand shows a greater sex difference than the left hand leading to the suggestion that the right hand is more representative of prenatal androgen influence (8).

On the other hand, we found for the first time, significant negative correlations between the 2D:4D ratio and several urinary androgen metabolites (T-G, 5αAdiol-17G, 5βAdiol-17G). Our findings could reflect a possible difference in androgen phase II metabolism depending on 2D:4D ratio among female athletes. As opposed to the circulatory androgens, the urinary androgen concentrations are dependent on the expression and activity of phase II enzymes i.e., UGTs and SULTs. T-G, 5βAdiol-17G and 5αAdiol-17Gs are all conjugated at the 17β- OH-position preferable by UGT2B17, whereas T-G and 5αAdiol-17G may also be inactivated by UGT2B15, UGT2A1, and UGT1A4 (38, 39). The expression and activity of UGT2B17 and UGT2B15 are known to be higher in men than in women (40, 41). It is possible that polymorphisms in UGTs and other androgen metabolizing enzymes, as well as other factors that determine the expression and activity of UGTs, may be associated with the androgen load of the fetus in the first trimester. Several fetal UGTs are expressed already in the first trimester (42). Further studies are warranted to establish any putative link between phase II metabolism and the 2D:4D ratio.

The studies involving human participants were reviewed and approved by the Regional Ethics Committee (EPN 2011/1426-32). The patients/participants provided their written informed consent to participate in this study.

EE, BB, and AH were involved in the concept/design of the study, acquisition of data, and data analysis. J-OT and ME performed the quantification of urinary androgens. EE, BB, LE, J-OT, ME, and AH were involved in the manuscript preparation, critical revision of the article and approval of the article. All authors listed met the conditions required for full authorship.

We would like to thank research midwifes, Berit Legerstam and Liselott Blomberg at the Women's Health Research Unit, Karolinska University Hospital for their support and help with collecting data. We would also like to thank coaches and athletes for their help, curiosity and inspiration. Furthermore, we thank laboratory technicians at the Doping laboratory for their help with urinary analyses, statistician Elisabeth Berg for knowledge and continuous help with statistical analyses and the SOC for support and promotion of this scientific work.

Copyright © 2020 Eklund, Ekström, Thörngren, Ericsson, Berglund and Hirschberg. This is an open-access article distributed under the terms of the Creative Commons Attribution License (CC BY). The use, distribution or reproduction in other forums is permitted, provided the original author(s) and the copyright owner(s) are credited and that the original publication in this journal is cited, in accordance with accepted academic practice. No use, distribution or reproduction is permitted which does not comply with these terms.

New Perspectives on the Endocrinology of Physical Activity and Sport