Osteoporosis (OP) is one of the most common bone disorders in human beings, its incidence increases with age, especially in postmenopausal women because of the decrease in estrogen (1, 2). With the growth of the aging population in the world, the prevalence of OP is increasing dramatically, bringing a huge economic burden to the society and families (3, 4).

OP is characterized by a reduction in bone mineral density, which is mainly due to the imbalance of bone tissue formation and absorption (5, 6). Bone homeostasis depends on the balance between osteoblasts and osteoclasts, OP occurs as a result of the decrease of osteoblast-induced bone formation and the increase of osteoclast-induced bone absorption. Bone weakness and fracture are common in patients with OP because of their low bone mass and quality. Abnormal proliferation and differentiation of osteoblasts were shown involved in reduction of bone mass (7, 8). Study on the molecular mechanisms of osteoblastic differentiation is helpful to understand the pathogenesis of OP and develop new strategies for OP treatment.

Neural cell adhesion molecule (NCAM, CD56), a member of the immunoglobulin (IgG) superfamily, is widely expressed in the nervous system and plays multi-functional roles in neural regeneration, cell to cell adhesion, signal transduction and modulation of learning and memory (9–11). NCAM has been found to be expressed in other cell types such as epithelial cells, natural killer cells, skeletal muscle and mesenchymal stem cells (MSCs) (12, 13). In our previous studies, we demonstrated that NCAM enhances insulin sensitivity and promotes adipocyte differentiation, and we further found that NCAM inhibits hypertrophic chondrocyte differentiation and reduces chondrocyte hypertrophy in experimental osteoarthritis model (14, 15). Our results indicate that NCAM plays a key role in cell multi-directional differentiation, however, the function of NCAM in osteoblastic differentiation remains largely unknown.

The Ncam–/– (knockout; KO) mice were generated on a C57/BL6 background as previously described (16). Wild-type (WT) and KO MSCs were obtained from 8-week-old male mice as previously described (14). Briefly, cells were harvested from mouse bone marrow and cultured in low glucose Dulbecco’s modified Eagle’s medium (DMEM-LG, with 1 g/L glucose; Hyclone, Logan, UT, USA) containing 10% fetal bovine serum (FBS), 100 IU/mL penicillin and 100 g/mL streptomycin. Non-adherent hematopoietic cells were discarded after incubation for 7 days, and the adhered MSCs were purified by repeated passaging. MSCs with fibroblast-like morphology from passage 6 to 9 was used in this study.

Cells were seeded in 12-well plates at a concentration of 1×105 cells/mL. The MC3T3-E1 cells and MSCs were respectively incubated in a-MEM and DMEM with 10 mM β-glycerophosphate, 25 µM ascorbic acid-2-phosphate and 10 nM dexamethasone.

Cells were lysed with radio immuno-precipitation (RIPA) buffer and lysed on ice supplemented with proteinase and phosphatase inhibitors cocktail (Sigma). Protein concentrations were determined using BCA Protein Assay Kit (Pierce). Equal amounts of protein were separated by sodium dodecyl sulfate-polyacrylamide gel electrophoresis and transferred to polyvinylidene difluoride (PVDF) membrane. After blocking with 3% bovine serum albumin (BSA; Sigma) for 1 h, the membranes were incubated with primary antibodies against RunX2, Osterix, β-catenin, p-Akt, or β-actin overnight at 4°C. The membranes subsequently were washed three times with TBST and incubated with the secondary antibodies for 40 min at room temperature. The band density was scanned by ImageQuant LAS 4000 system (GE Healthcare) and analysed by ImageJ software.

The alizarin red staining was performed at 0, 7, or 14 days. Cells were fixed in 4% paraformaldehyde (PFA) for 30 min followed by staining with 40 mM Alizarin Red S (ARS; pH 4.2) for 30 min and then washed three times with deionized water. For the quantitative analysis of ARS, the stained wells were incubated with 10% cetyl pyridinium chloride monohydrate for 30 min at room temperature and then measured at 562 nm using a Molecular Devices microplate reader (15).

All data are expressed as the mean ± SEM. Statistical analysis was performed using one-way ANOVA followed by Tukey’s test. Differences were regarded as statistically significant at P < 0.05. Each experiment was performed at least in triplicate.

To explore the function of NCAM in osteoblast differentiation, stable NCAM down-regulated MC3T3-E1 cells were developed using plasmid-based small interfering RNA (siRNA). The expression level of NCAM was determined using western blot. The result showed that NCAM expression in the Sh-NCAM cells was much lower compared with that of Sh-ctl cells and the interference rate reached 70% (Figures 1A, B). The gene expressions of osteogenic markers RunX2 and Osterix were examined by quantitative real-time PCR, down-regulation of NCAM inhibited expressions of RunX2 and Osterix during osteogenic differentiation (Figures 1C, D). Western blotting analysis showed that the protein levels of RunX2 and Osterix were also decreased in Sh-NCAM MC3T3-E1 cells (Figures 1E–G). In addition, calcium deposition was visualized by Alizarin Red staining and quantitative analysis, the calcium content was significantly decreased in Sh-NCAM cells as compared to Sh-ctl MC3T3-E1 cells (Figures 1H, I). These results demonstrated that gene silencing of NCAM inhibits osteoblast differentiation of MC3T3-E1 cells. 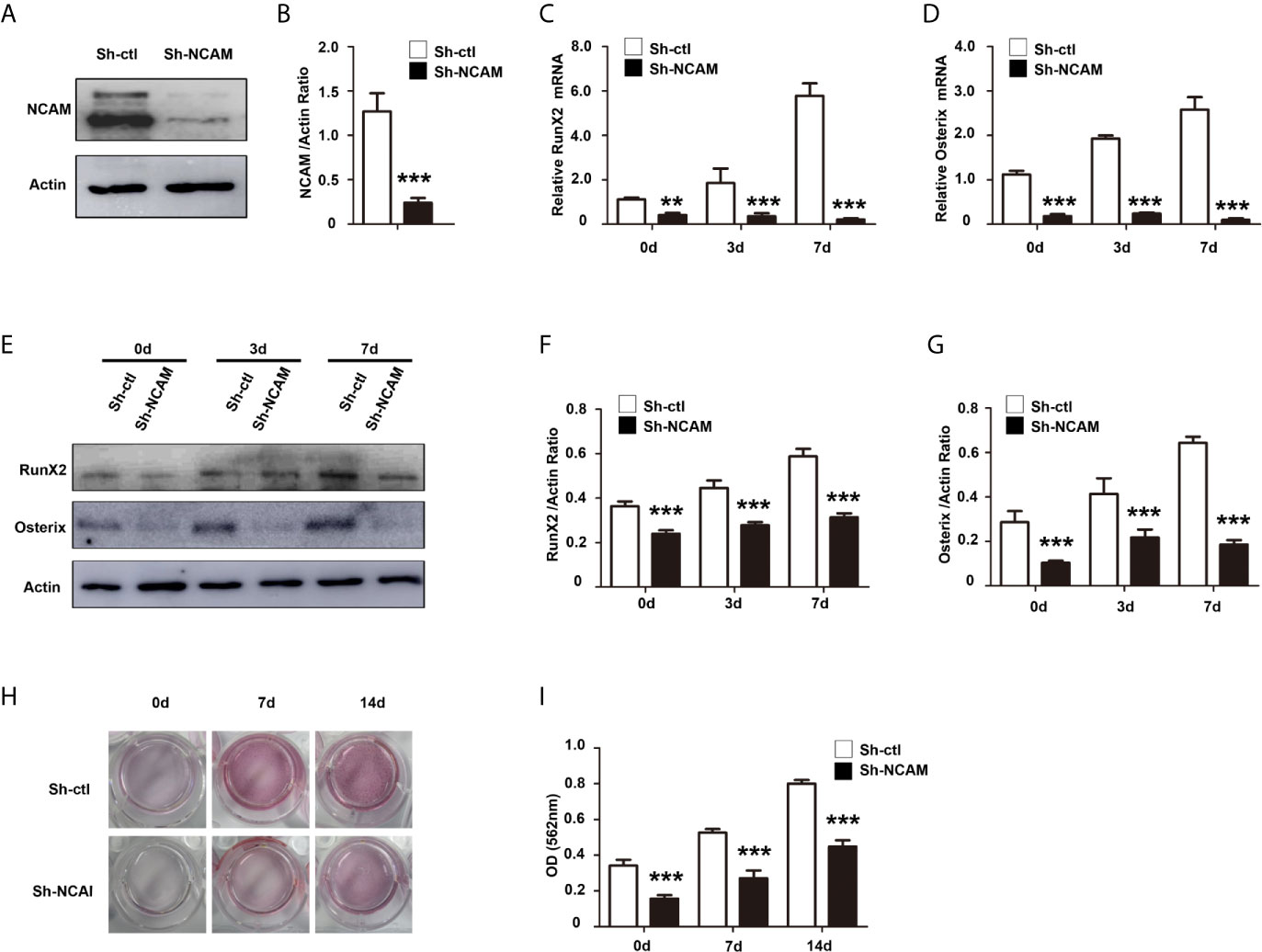 To further confirm the role of NCAM in osteoblast differentiation, we isolated bone marrow derived MSCs from wild-type (WT) and Ncam–/– (KO) mice. The Western blot results confirmed the expression of NCAM in wild-type MSCs but not in Ncam–/– cells (Figure 2A). To investigate whether NCAM deficiency affects osteoblast differentiation of MSCs, wild-type and Ncam–/– MSCs were treated with osteogenic differentiation medium. The mRNA expressions of RunX2 and Osterix were down-regulated in Ncam–/– MSCs as compared to WT cells (Figures 2B, C). The protein levels of RunX2 and Osterix were detected by Western blotting. As shown in Figures 2D–F, the induction of RunX2 and Osterix in Ncam–/– MSCs was also lower than that in wild-type cells. Alizarin red staining and quantitative analysis of the calcium content in Ncam–/– MSCs showed decreased calcium deposition as compared to wild-type cells (Figures 2G, H). The results further confirmed the NCAM level involved in osteoblast differentiation of MSCs, suggesting that NCAM might play a key role in osteogenesis of various cell lines. 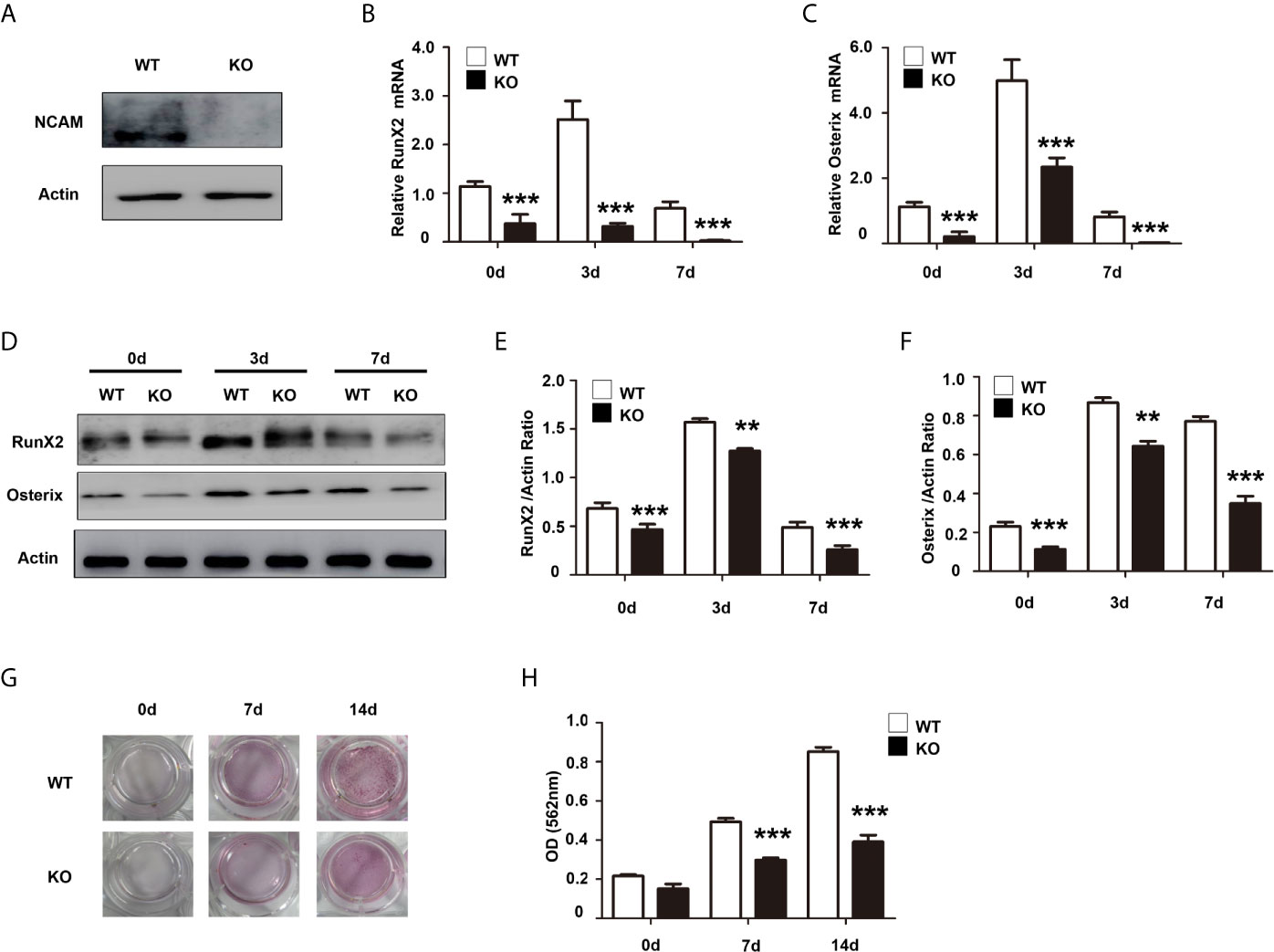 It has been shown that the Wnt/β-catenin signaling pathway plays an important role in osteogenic lineage (17). To investigate the mechanism of osteoblast differentiation mediated by NCAM, the expression of β-catenin was examined in Sh-ctl and Sh-NCAM MC3T3-E1 cells. The Western blotting results showed that β-catenin level was significantly decreased in Sh-NCAM cells (Figures 3A, B). To determine the role of β-catenin, we applied the Wnt signaling inhibitor XAV939 during osteogenic differentiation in MC3T3-E1 cells. The β-catenin expression was almost completely inhibited by XAV939 (≥ 5 μM) (Figures 3C, D). As a result of β-catenin suppression, the mRNA expressions of RunX2 and Osterix were down-regulated (Figures 3E, F). Accordingly, XAV939 at 5 μM totally inhibited the protein levels of RunX2 and Osterix in MC3T3-E1 cells (Figures 3G–I). In addition, calcium deposition was also significantly blocked by XAV939 (Figures 3J, K). These results indicate that Wnt/β-catenin signaling is involved in NCAM-mediated osteoblast differentiation. 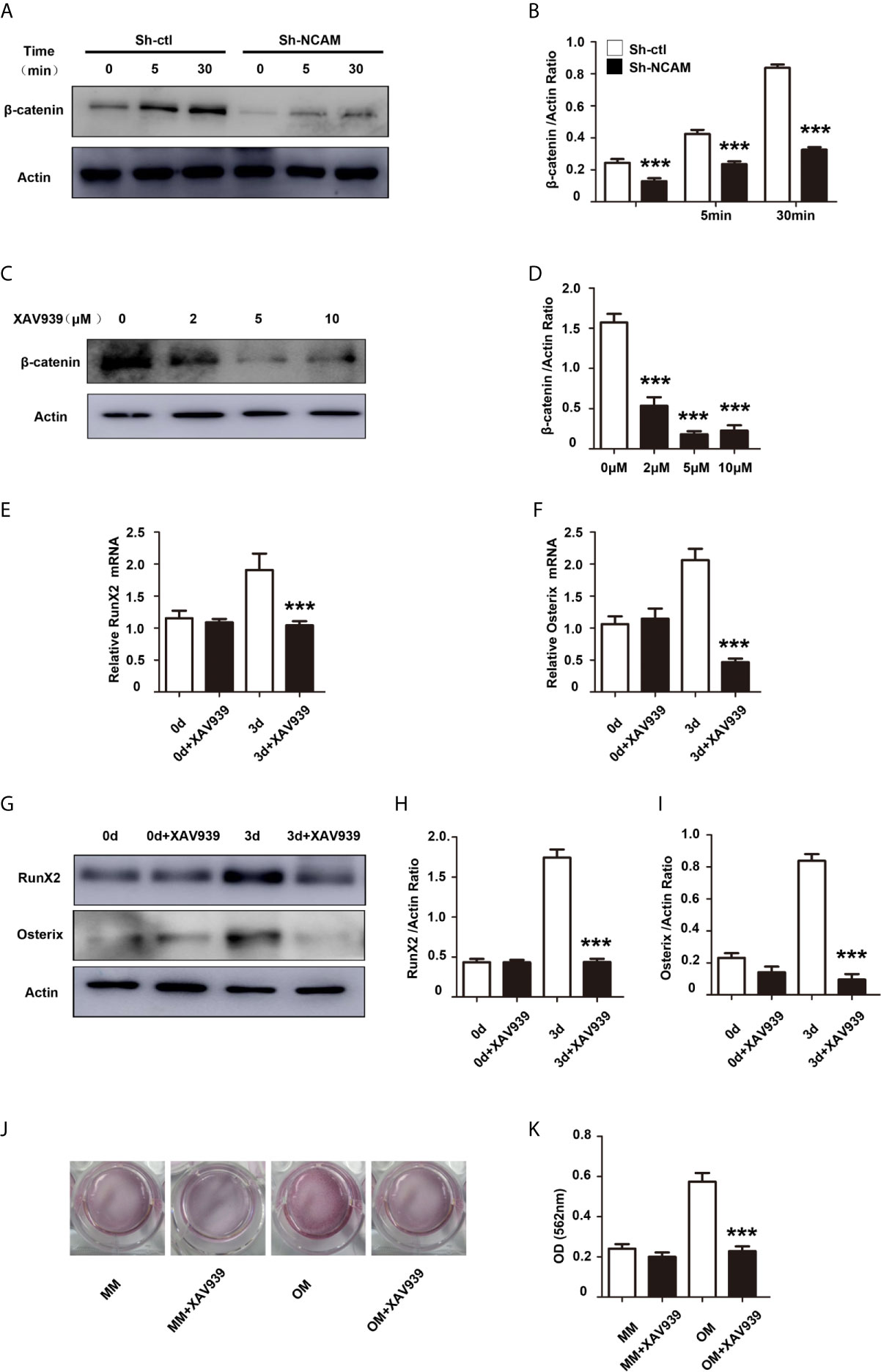 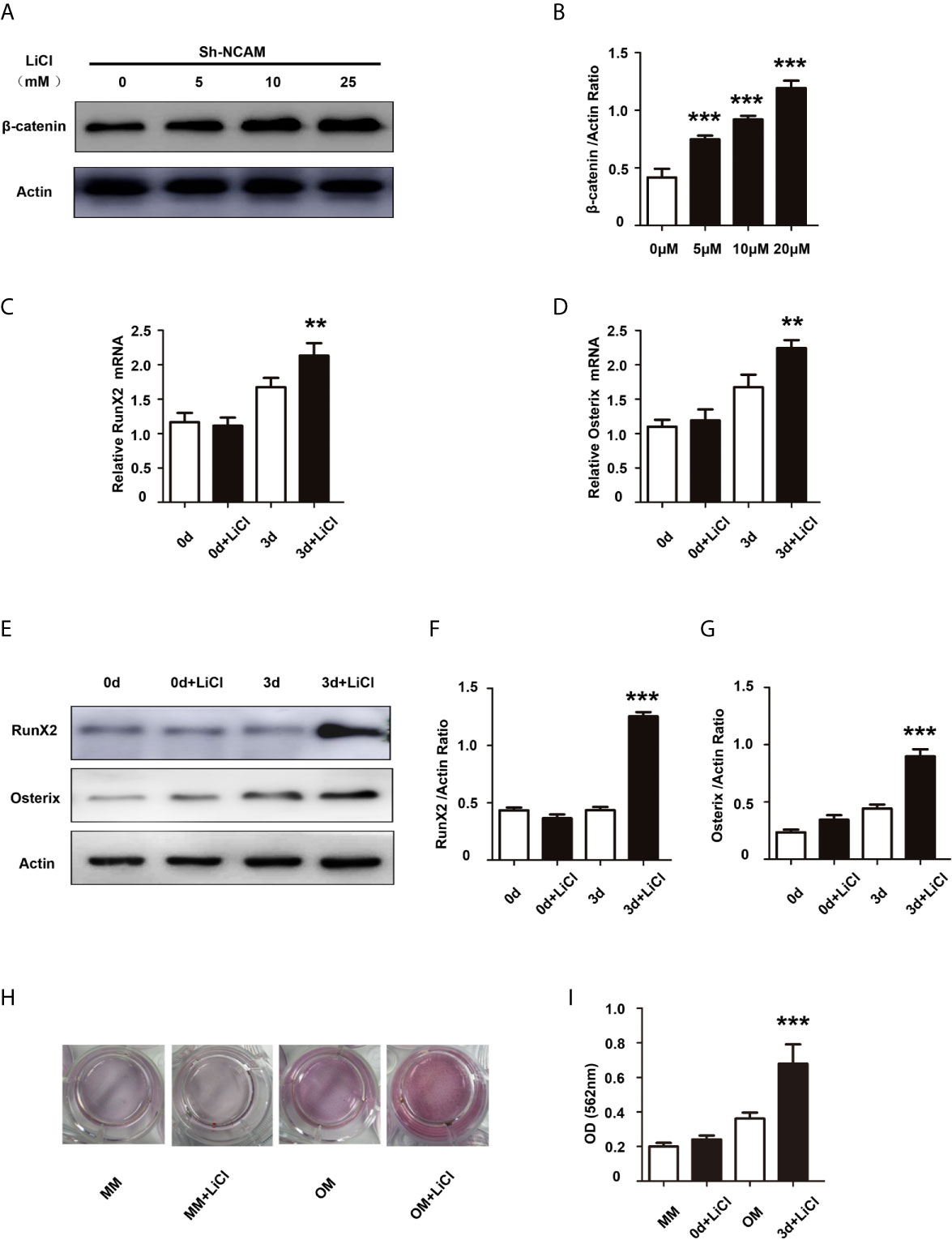 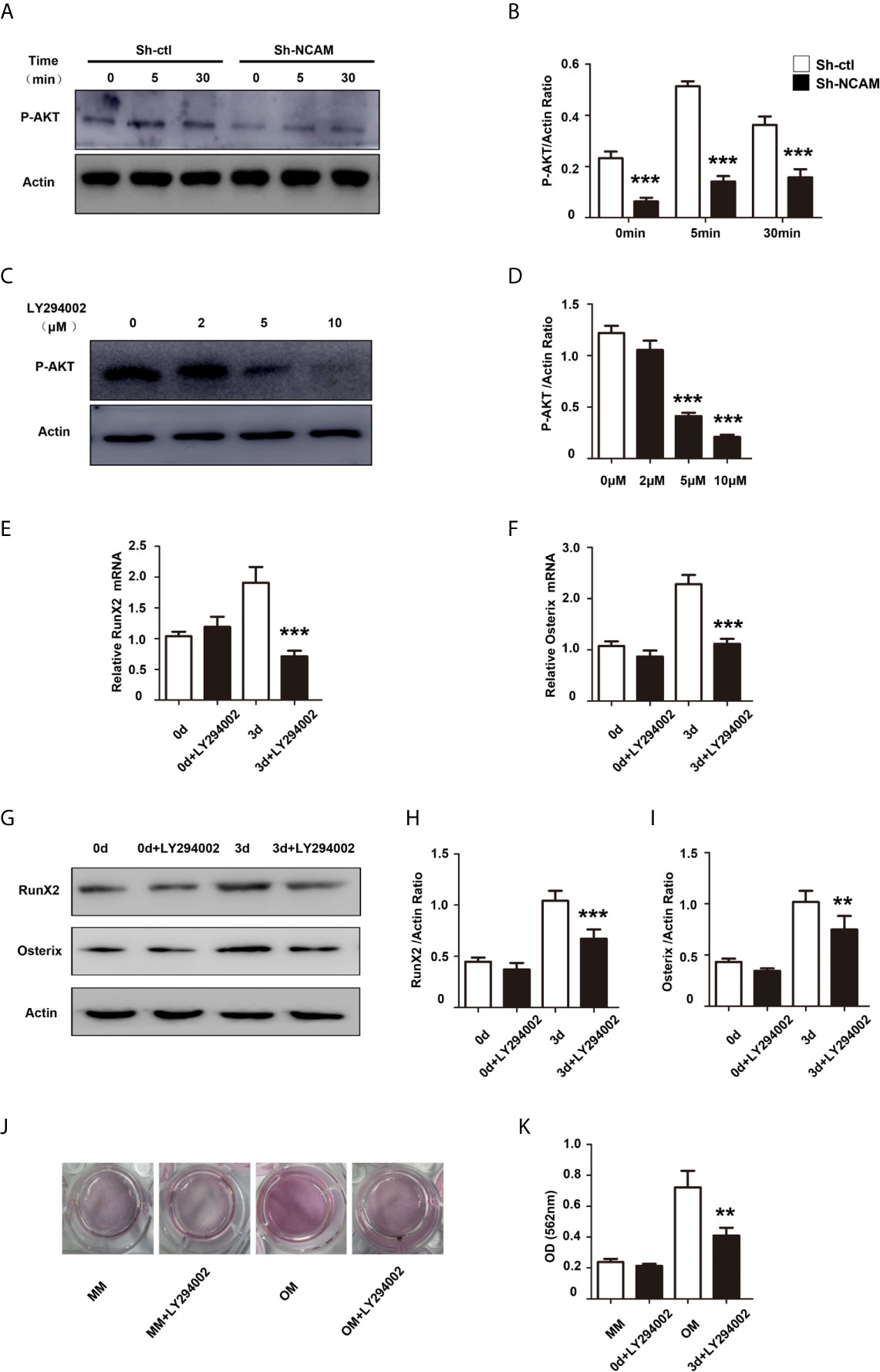 Wnt/β-catenin signaling, as the canonical Wnt pathway, is crucial for osteogenic lineage at early stages of osteogenic differentiation (29). Activation of Wnt/β-catenin signaling involves the binding of Wnt to surface receptors low-density lipoprotein receptor related protein 5/6 (LRP5/6) and Frizzled (30). In this study, we demonstrated that the β-catenin expression is decreased whereas the osteogenic markers and calcium deposition are recovered by Wnt activator in NCAM-silenced MC3T3−E1 cells. NCAM induces activation of FGFR and is an important interaction partner (31). Previous study (32) showed that NCAM-silencing represses β-catenin signaling via fibroblast growth factor receptor (FGFR) and glycogen synthase kinase-3β (GSK-3β). Other report has demonstrated that Wnt/β-catenin pathway reduces expression of NCAM through miR-30a-5p (33). These findings suggest that the effect of NCAM on Wnt signaling appears to bidirectional and indirect, which might be mediated by FGFR, GSK-3β or miR-30a-5p. PI3K/Akt signaling pathway was also found to play central role in osteoblast differentiation (34). We showed here that Akt activation is decreased in NCAM-silenced MC3T3−E1 cells and contributes to NCAM-mediated osteoblast differentiation. A previous study demonstrated that the critical osteogenic gene Runx2 is a target of β-catenin/TCF1 for the regulation of osteoblast differentiation and bone formation (35). Runx2 is also involved in Akt pathway activation, Runx2 and PI3K-Akt signaling are dependent on each other in the control of osteoblast differentiation, PI3K inhibitor inhibits DNA binding of Runx2 and Runx2-dependent transcription, and Runx2 also up-regulates expression of Akt and p85 and p110b subunits of PI3K (36). Another key osteogenic gene Osterix is a downstream osteoblastic gene of Runx2 (24, 37). These previous studies are consistent with our results indicating that NCAM silencing inhibits the expressions of osteogenic genes Runx2 and Osterix by regulation of Wnt/β-catenin and PI3K-Akt signaling pathways.

OP and osteoarthritis (OA) are the two most common disorders of bone related to aging worldwide. OA is characterized by degeneration of cartilage and damage in subchondral and periarticular bone (38). Although some studies reported that OP may aggravates the degree of cartilage destruction in OA knee (39–41), the relationship between them is complex. In the present study, we found that NCAM silencing inhibits osteoblast differentiation, indicating that NCAM plays a key role in OP. We also previously demonstrated that NCAM deficiency increases the severity of cartilage damage in experimental OA (15). Our data provide NCAM as a novel target insight into the relationship between OA and OP, suggesting that overexpression of NACM can be used as a new potential strategy for the treatment of patients with OP and OA.

However, there are some limitations to the study, for example that it neither take into the role of NCAM in osteoblastogenesis in vivo studies, nor relates to further research on in-depth mechanism that how NCAM triggers the signaling pathways.

The animal study was reviewed and approved by The Ethics Committee of Xinxiang Medical University.

This work was supported by the grants from the National Natural Science Foundation of China (No. U1704186, 81771336 and 81671226), Key Scientific Research Project of Colleges and Universities in Henan Province (No. 19A310020), and Henan Neural Development Engineering Research Center for Children Foundation (SG201909).

Copyright © 2021 Cheng, Feng, Gao, Jian, Liu, Wang, Xie, Wang, Feng and Yang. This is an open-access article distributed under the terms of the Creative Commons Attribution License (CC BY). The use, distribution or reproduction in other forums is permitted, provided the original author(s) and the copyright owner(s) are credited and that the original publication in this journal is cited, in accordance with accepted academic practice. No use, distribution or reproduction is permitted which does not comply with these terms.