To the best of our knowledge, we report a case of MEN2A complicated by moyamoya syndrome. A 52-year-old woman presented with vertigo. Magnetic resonance angiography (MRA) revealed bilateral supraclinoid stenosis of the internal carotid artery and abnormal moyamoya-like vessels around the basal ganglia. She had a heterozygous variant of RNF213, which is the susceptibility gene for moyamoya disease. She had also previously received diagnoses of medullary thyroid carcinoma (MTC) at age 23 and left-sided pheochromocytoma (PHEO) at age 41. Genetic testing revealed heterozygosity for a mutation at codon 634 in exon 11 (TGC-TTC mutation; p.Cys634Phe) of the Ret gene. Intracranial vascular stenosis may have been caused by a genetic mutation of RNF213 and hypersecretion of catecholamines by MEN2A. Physicians should recognize that MEN2A can be present with moyamoya syndrome.

Moyamoya disease is another rare genetic diseases; it is characterized by bilateral stenosis of the internal carotid artery. To prevent these complications, bypass surgery needed in some cases (2). On the other hand, moyamoya-like vascular changes can occur through autoimmune or endocrinology dysfunction or after radiation treatment; these changes represent secondary moyamoya disease, known as moyamoya syndrome or quasi-moyamoya disease.

In this report, we describe the first known case of MEN2A complicated by moyamoya syndrome and discuss the pathological processes of these conditions.

A 52 year-old woman visited our hospital complaining of vertigo without neurological deficit. She had a height of 157cm and a weigh of 61kg. She did not have an abnormal appearance of the face or tongue. She was taking levothyroxine sodium 300 µg/2x and simvastatin 10 mg/2x for hypothyroidism and dyslipidemia. Laboratory analysis revealed a carcinoembyronic antigen, level of 73.4 ng/mL (normal: <5.0 ng/mL); a calcitonin level of 1074 pg/mL (normal: 15-86 pg/mL); an adrenaline level of 107 pg/mL (normal <120 pg/ml); noradrenalin, 1154 pg/mL (normal: 60-500 pg/mL); and a dopamine level of 36 pg/mL (normal: <30pg/mL). All other blood cell counts and serum biochemistry parameters were normal. Magnetic resonance angiography (MRA) revealed bilateral supraclinoid stenosis of the internal carotid artery and abnormal moyamoya-like vessels around the basal ganglion (Figure 1A) but MRI FLAIR (Figure 1B) and DWI (Figure 1C) showed no specific ischemic or hemorrhagic lesions in the brain. SPECT showed no hypoperfusion or laterality (Figure 1D); using genomic DNA samples from the patients, we evaluated the polymorphism in c.14576G>A in the RNF213, a susceptibility gene for moyamoya disease, and the results showed a heterozygous variant of the RNF213. 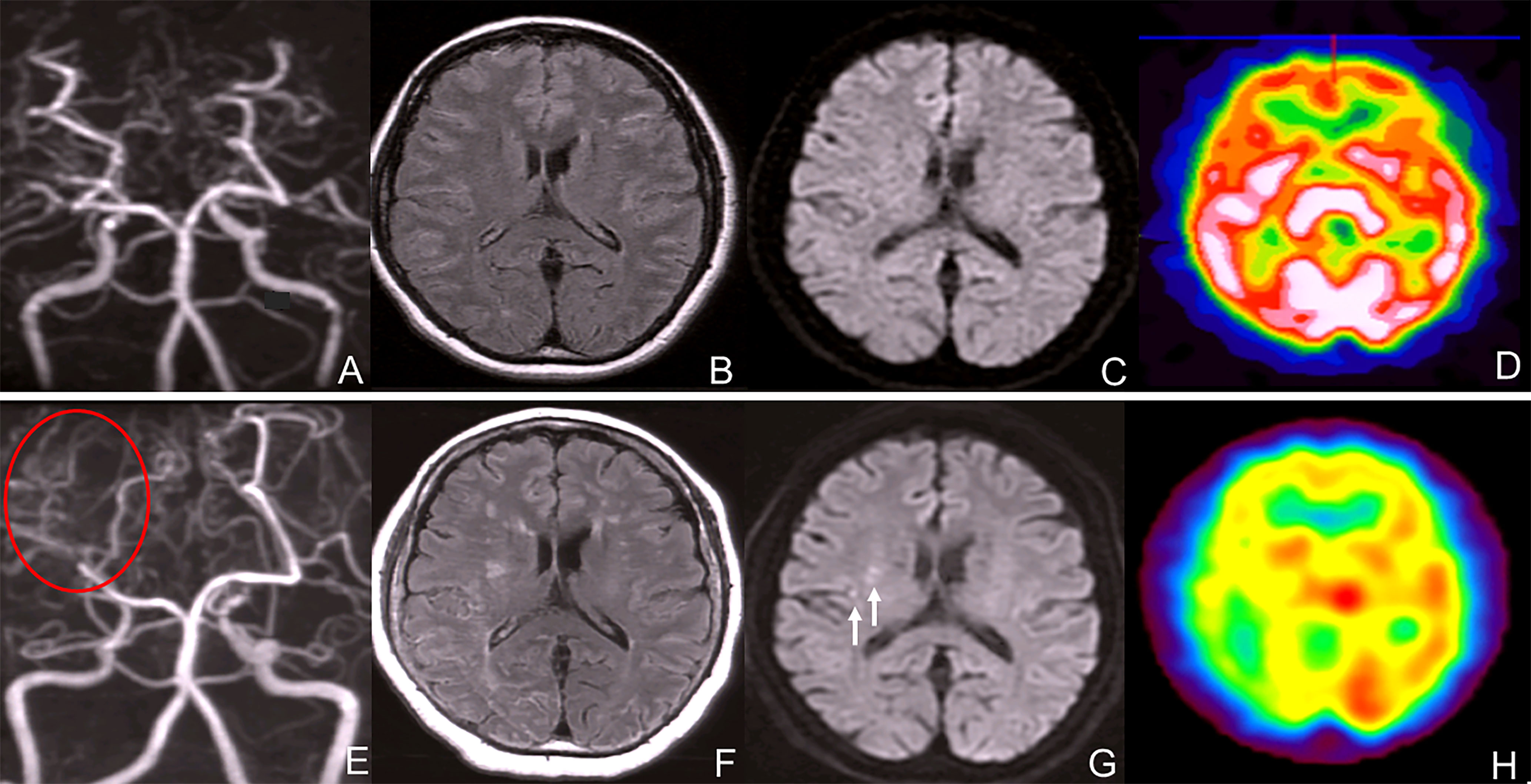 The patient was diagnosed with stage T2N1M0 MTC at another hospital at age 23; the condition was managed surgically with total thyroidectomy and left central neck D2a dissection. At age 41, she was diagnosed with left-sided pheochromocytoma (PHEO) at our hospital, for which she underwent surgery. No postoperative recurrence of the left adrenal lesion was observed, and the right adrenal lesion was unchanged and showed 123I-MIBG accumulation. (Figure 2A)

Genetic testing, performed after she provided informed consent, revealed heterozygosity for a mutation at codon 634 in exon 11 (TGC-TTC mutation; p.Cys634Phe) of the RET gene. The patient’s mother underwent thyroid surgery and bilateral pheochromocytomas were observed. MEN2A patients are on the maternal side, but not on the paternal side. Moyamoya disease and stroke patients are neither on the paternal side nor the maternal side. The pedigree chart is shown in Figure 3. There was a possibility that certain family members of the patient could not develop the moyamoya disease; however, this could not be confirmed because screening tests, such as MRA, were unavailable. On the basis of genetic analyses, imaging findings, and a history of clonal presence of multiple endocrine neoplasia type 2A (MEN2A; OMIM # 171400), MEN2A with moyamoya syndrome was diagnosed. 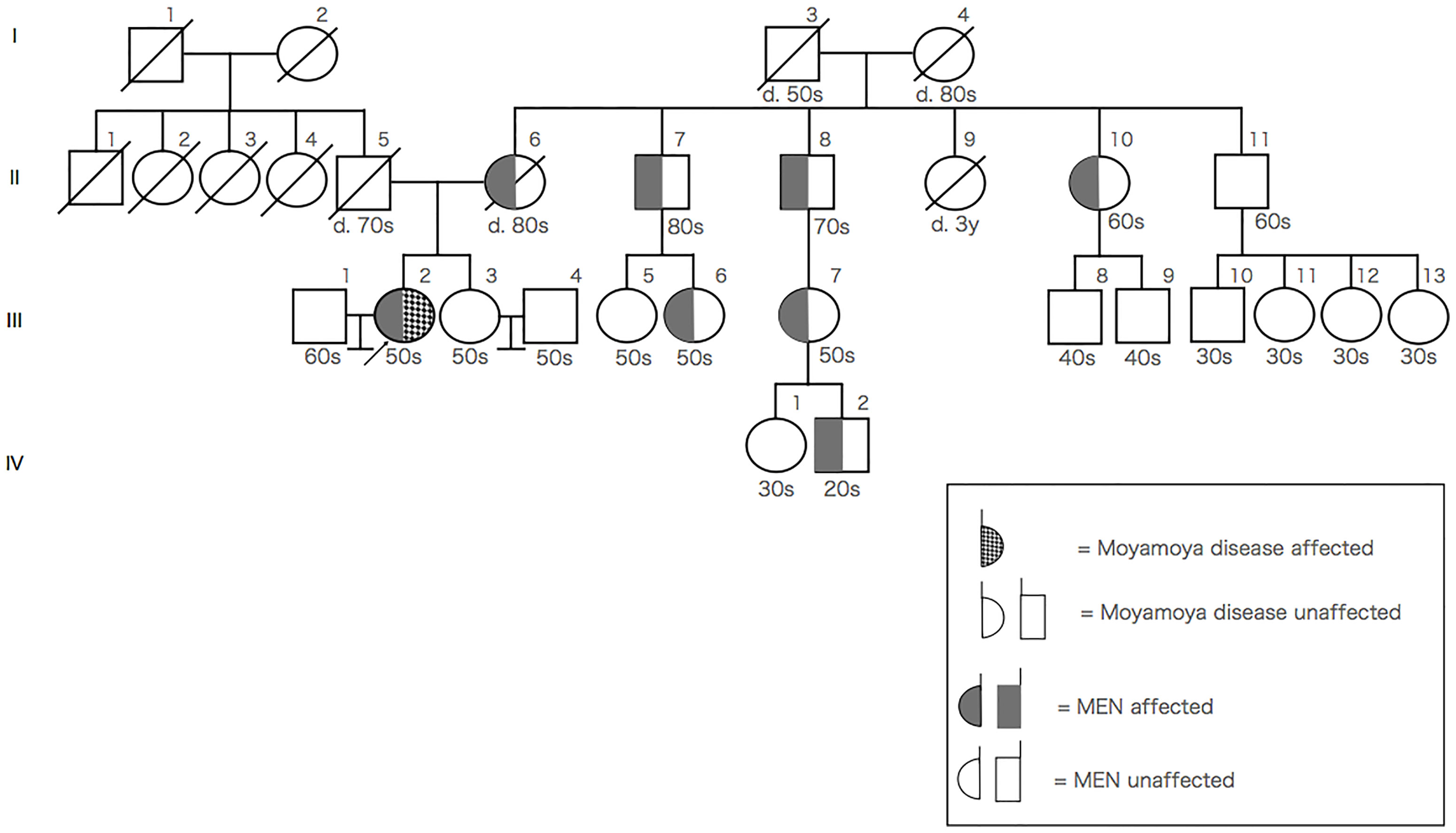 MEN2A is caused by germline missense mutations in the proto-oncogene rearranged during transfection (RET) proto-oncogene, localized to chromosome 10, arising most commonly (in 80%-90% of cases) from mutations in codon 634 of RET. Moyamoya disease is characterized by bilateral supraclinoid internal carotid artery stenosis and an abnormal vascular network around the basal ganglion. The pathogenesis of moyamoya disease is unknown. The disease is observed predominantly among the East Asian population (3), and the prevalence of moyamoya disease appears to be slightly lower among Chinese, compared with Koreans or Japanese (4). Recent studies have increasingly reported this disease in adults and in the Western population (5). Most of the cases of moyamoya disease are sporadic, but there is a small percentage that is familial; ring finger protein 213 (RNF213), encoded by chromosome 17, has been implicated as a cause for the disease (6).

PHEO is associated with cerebral infarction and vasospasm, which is secondary to excessive catecholamine secretion. The catecholamine pathway is a primary regulator of cerebrovascular tone and cerebral blood flow, and the majority of its effects are mediated though alpha-adrenergic receptors. These receptors are abundant in the cerebral arteries and are stimulated by catecholamines, which leads to increased intracellular calcium concentration and vascular contraction. Some reports have concluded that cerebral infarction caused by PHEO is vasospasm that results from excessive catecholamine secretion (7).

Adult onset cases of moyamoya disease tend to be hemorrhagic and occur between the ages of 30 and 45 (9). In our case, the onset was ischemic and relatively late in terms of age. We mainly suspected that cerebrovascular occlusion complicated with moyamoya-like vessels (i.e., moyamoya syndrome) in our patient was caused by excessive catecholamine secretion by the PHEO. This is because our case was an atypical case of moyamoya disease, and it is quite possible that the ischemic lesion progressed gradually due to catecholamine-stimulated MEN2A, despite there originally being an element of RNF213 mutation. In our patient, conversely, in moyamoya disease, although a number of genetic abnormalities have been identified, no studies have demonstrated an association between moyamoya disease and RET, and the moyamoya-like vessels in our patient were real moyamoya disease caused by RNF213 mutation, which just coincidentally complicated MEN2A.

We could not identify the real cause of moyamoya syndrome in this case, but both pathological processes are extremely rare. To prevent progressive arterial stenosis in moyamoya syndrome, the most important treatment is monitoring and controlling the disease as if it were an autoimmune disorder or endocrine disease. In the past, some cases of arterial stenosis have improved after medical treatment; therefore, the first strategy is medical treatment (10). If progressive vascular occlusion or bleeding had occurred in our patient, we would have considered surgical therapy, such as bypass.

As this is the first report of this case, future studies and reports are warranted to establish a complete association. However, the concomitant hypersecretion of catecholamines in a case with genetic susceptibility to RNF213 may have resulted in a clinical phenotype of intracranial vascular stenosis. Physicians should recognize that MEN2A can be complicated with moyamoya syndrome.

Copyright © 2021 Matano, Murai, Watanabe, Shirokane, Igarashi, Shimizu, Shimada and Morita. This is an open-access article distributed under the terms of the Creative Commons Attribution License (CC BY). The use, distribution or reproduction in other forums is permitted, provided the original author(s) and the copyright owner(s) are credited and that the original publication in this journal is cited, in accordance with accepted academic practice. No use, distribution or reproduction is permitted which does not comply with these terms.