Purpose: Development and validation of a nomogram for the prediction of lateral lymph node metastasis (LLNM) in medullary thyroid carcinoma (MTC).

Methods: We retrospectively reviewed the clinical features of patients with MTC in the Surveillance, Epidemiology, and End Results (SEER) database between 2010 and 2017 and in our Department of Surgical Oncology, Hangzhou First People’s Hospital between 2009 and 2019. The log‐rank test was used to compare the difference in the Kaplan–Meier (K–M) curves in recurrence and survival. The nomogram was developed to predict the risk of LLNM in MTC patients. The prediction efficiency of the predictive model was assessed by area under the curve (AUC) and concordance index (C-index) and calibration curves. Decision curve analysis (DCA) was performed to determine the clinic value of the predictive model.

Result: A total of 714 patients in the SEER database and 35 patients in our department were enrolled in our study. Patients with LLNM had worse recurrence rate and cancer-specific survival (CSS) compared with patients without LLNM. Five clinical characteristics including sex, tumor size, multifocality, extrathyroidal extension, and distant metastasis were identified to be associated with LLNM in MTC patients, which were used to develop a nomogram. Our prediction model had satisfied discrimination with a C-index of 0.825, supported by both training set and internal testing set with a C-index of 0.825, and 0.816, respectively. DCA was further made to evaluate the clinical utility of this nomogram for predicting LLNM.

Currently, there is no accurate preoperative assessment to evaluate the lateral lymph node metastasis (LLNM) (6). If we can effectively identify who are prone to be LLNM more effectively, patients can be given more comprehensive and targeted preoperative examination and more active surgical intervention. On the one hand, it may reduce the risk of postoperative recurrence and reoperation. On the other hand, it may avoid unwanted economic and psychological burdens for low-risk patients because of overtreatment.

With the development of precision medicine, the extent of initial surgery for MTC has become increasingly important with regard to the treatment and prognosis of patients. Therefore, we designed a retrospective study to assess the incidence of LLNM in MTC patients.

The data we analyzed were extracted from two parts, one from the Surveillance, Epidemiology, and End Results (SEER) database between 2010 and 2017, and the other from our Department of Surgical Oncology, Hangzhou First People’s Hospital between 2009 and 2019.

Data Selection From the SEER

The SEER*Stat software (version 8.3.8; https://www.seer.cancer.gov/seerstat) produced by the Surveillance Research Program and National Cancer Institute was applied to identify the MTC patients who had undergone surgical treatment (7). Inclusion criteria were the following (1): patients who were diagnosed from 2010 to 2017 with histopathology codes of the International Classification of Diseases for Oncology, 3rd edition (ICD-O-3), 8510/3, 8346/3, 8346/3, and 8346/3 (2); all patients treated with total thyroidectomy for MTC and were consecutively selected; and (3) patients who underwent central lymph node dissection (CLND) with lateral lymph node dissection. Exclusion criteria were the following (1): patients whose clinicopathological profiles were unclear (2); patients aged <18 and >85 years; and (3) patients with history of other malignant tumors. The clinicopathological profiles used the derived AJCC stage group (7th edition) and CSstage (https://cancerstaging.org).

Data Selection From our Medical Center

We collected 35 patients with MTC confirmed by pathology in our medical center as the external testing set for this model. The pathological results of the external testing set were jointly diagnosed by two pathologists in our hospital. The histological type, extrathyroidal extension, tumor size, and number of the primary lesion were clearly defined. The lymph nodes are strictly based on the division of the surgeon. The calculation of the total lymph nodes includes the central compartment and the lateral compartment. If routine pathology is difficult to determine, immunohistochemistry will be used to assist in the diagnosis.

Statistical analysis was performed by R Studio (Version 1.3.1093). Normally distributed data are expressed by mean ± standard deviation, and skewness data are expressed by interquartile range. The log‐rank test was used to compare the difference in the Kaplan–Meier (K–M) curves in recurrence and survival. The chi-square test and t-test were applied for univariate analysis. Then, multivariable logistic regression analysis was used to construct the predictive model based on the results, and a further nomogram was developed. Odds ratios (ORs) having 95% confidence interval (CI) were calculated. The prediction efficiency of the predictive model was assessed by area under the curve (AUC) and concordance index (C-index) and calibration curves in training set and testing set. Decision curve analysis (DCA) was also performed to determine the clinical utility of the predictive model by quantifying the net benefit at disparate threshold probabilities. p < 0.05 was statistically significant.

Demographics and Characteristics of Patients

Selection of Risk Factors for LLNM

A total of 221 in 502 cases of training set had positive lateral regional lymph nodes (44%). At univariate analysis, sex, multifocality, tumor size, extrathyroidal extension, and distant metastasis were found as the potential risk factors associated with LLNM in MTC patients (Table 1). The data for the tumor diameter were metric variable, so the cut-point of 38 mm was calculated for predicting lateral lymph node metastases. Multivariate logistic regression was further performed to screen for significant variables associated with LLNM. All of the variables were found to be significantly associated with LLNM (Table 2).

Nomogram Development and Validation for Prediction of LLNM in MTC Patients

Based on the results that we analyzed in multivariate logistic regression model, five variables including sex, multifocality, tumor size, extrathyroidal extension, and distant metastasis were finally extracted to build an intuitive nomogram model for predicting the risk of LLNM in patients with MTC (Figure 2). 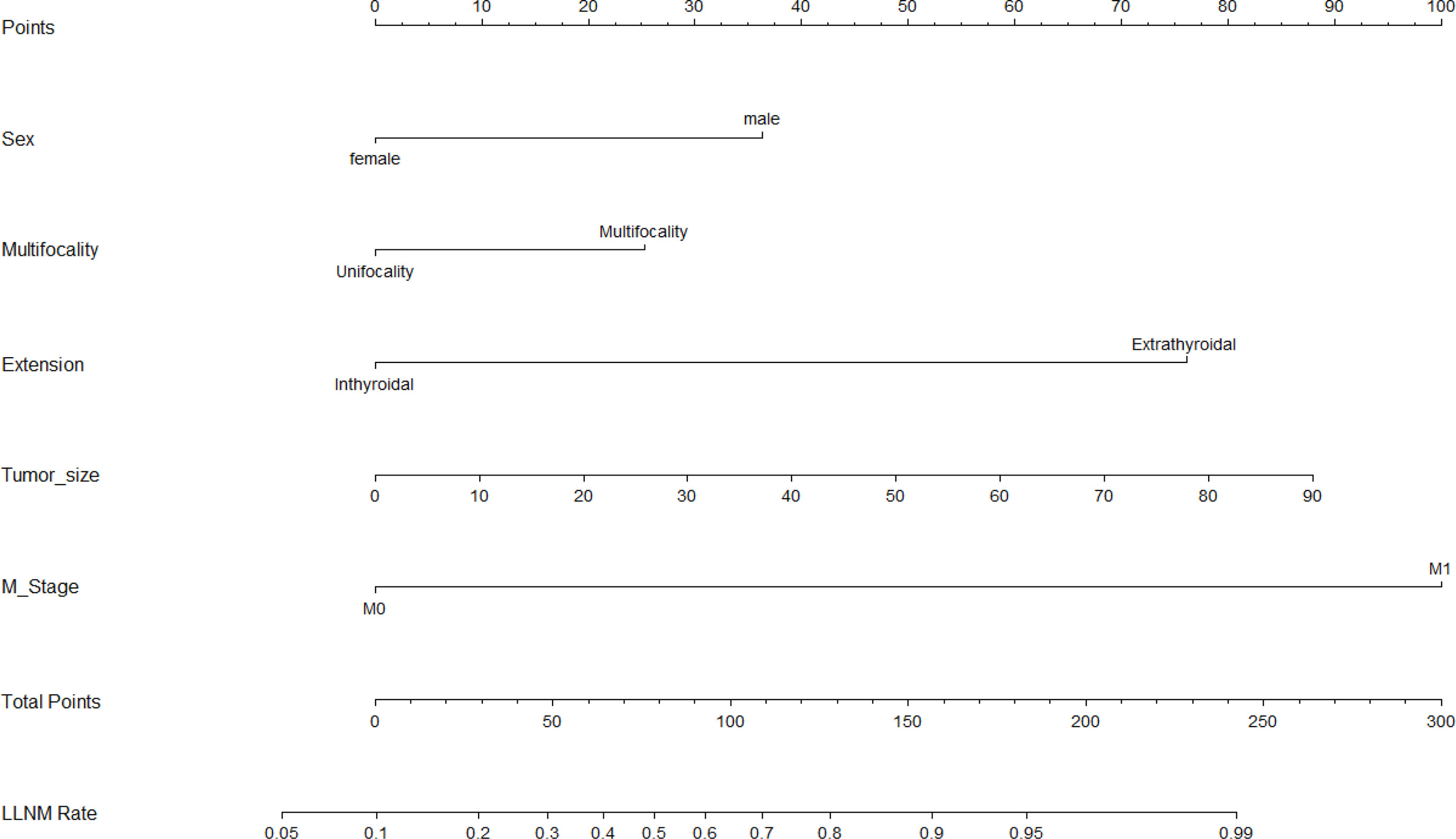 To further evaluate the predictive capacity of the nomogram, patients with a risk score of 74.2 were the cut-point for predicting lateral lymph node metastases (Youden index = sensitivity + specificity −1; point = 74.2, Figure 5). The clinical value of the nomogram was assessed by DCA based on the net benefit and threshold probabilities. For example, when the value evaluated in the nomogram reaches a certain value, the probability of LLNM in patient I is denoted as Pi. When Pi reaches a certain threshold (denoted as Pt), it is considered positive. The ordinate of DCA is the net benefit (NB), which is defined as [true positives − false positives × Pt/(1 − Pt)]/sample number. The DCA curve can be obtained by plotting Pt from NB. We performed DCA, which showed that predicting the LLNM by applying the model would be better than having all patients or none patients treated by this model with a range of the threshold probability between >0.1 and <0.9 (Figure 6). 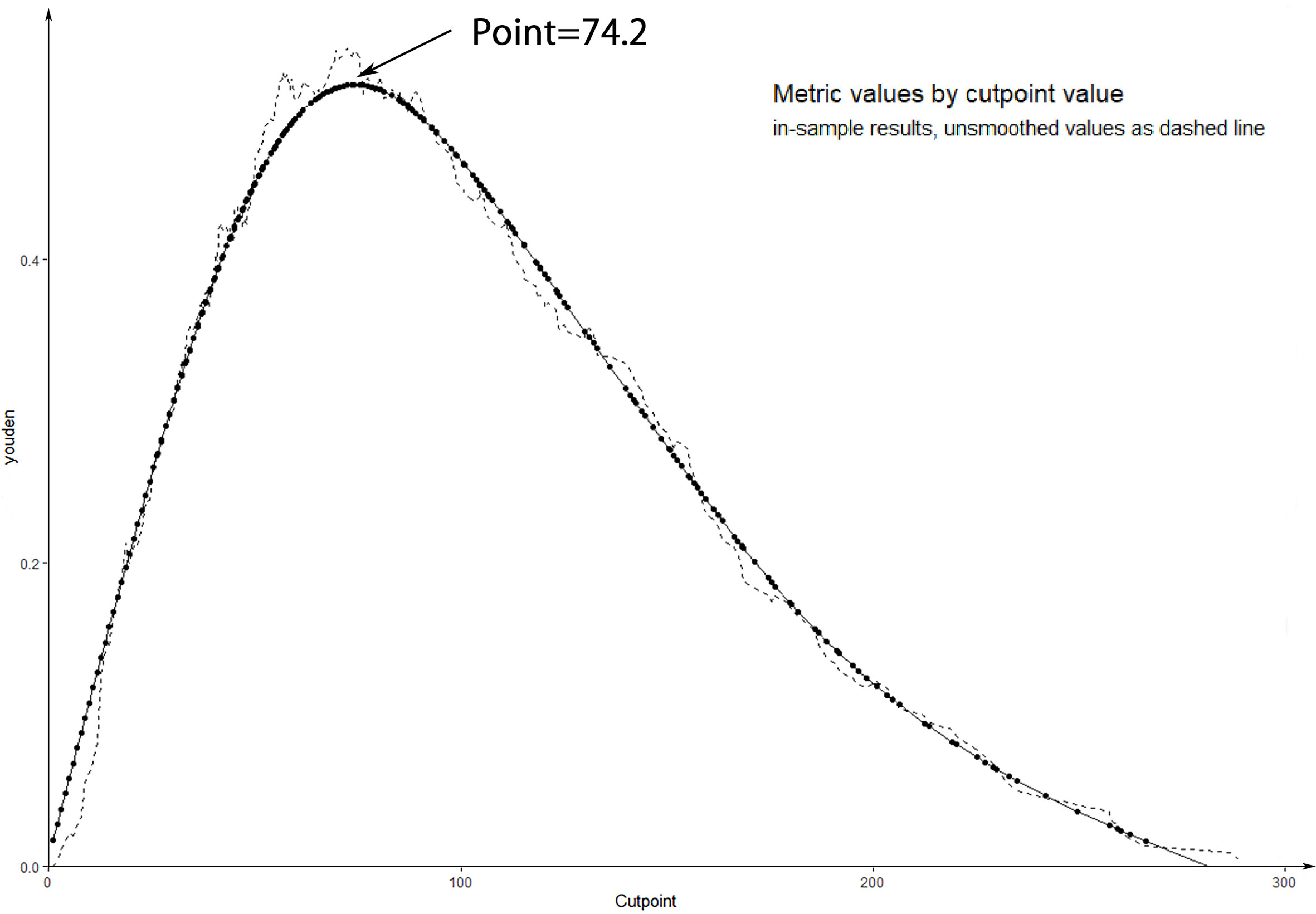 Figure 5 The curve of Youden and cut-point. 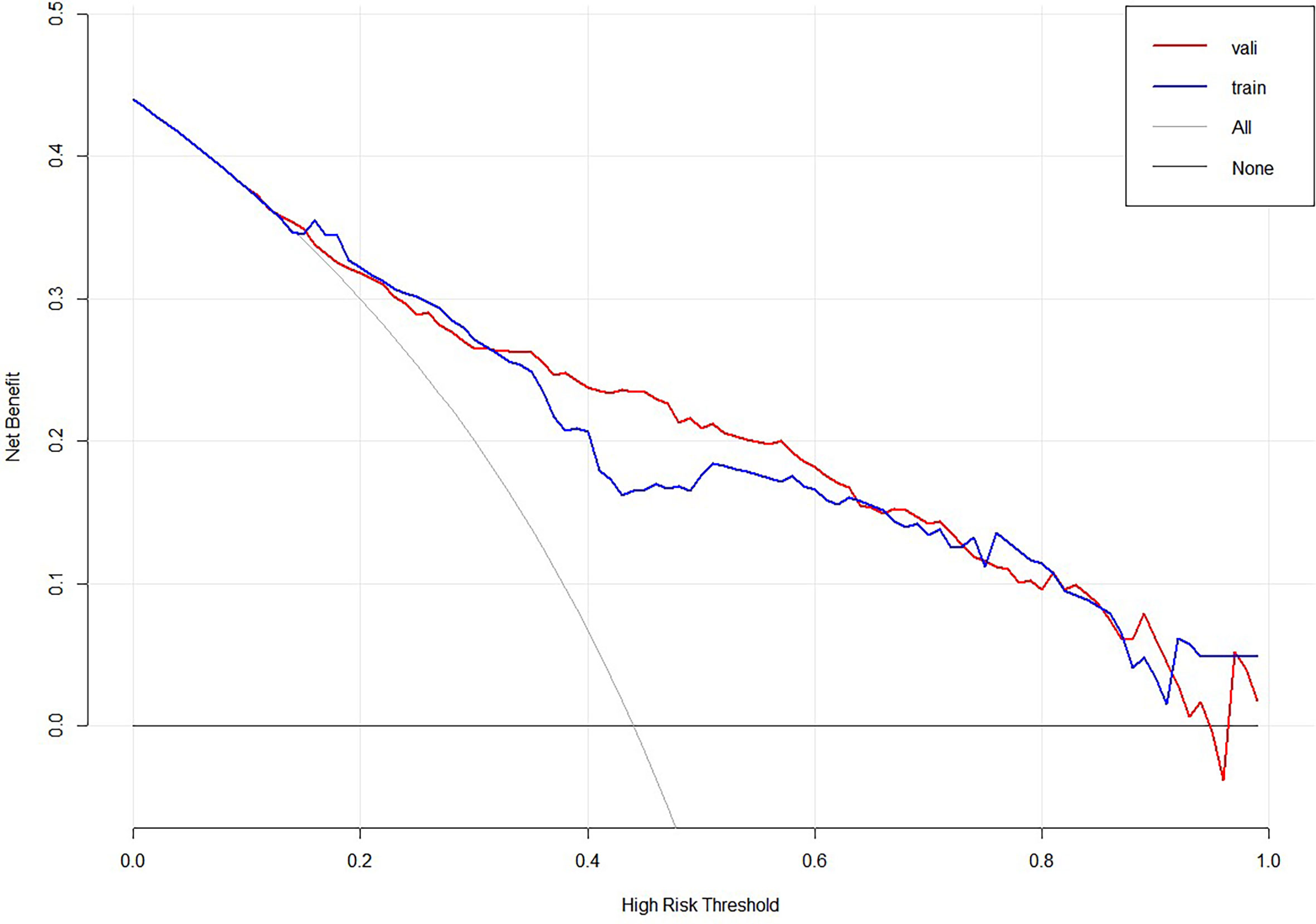 Medullary thyroid carcinoma is a group of carcinomas that intermediate between the differentiated thyroid carcinomas and anaplastic thyroid carcinoma, whose 10-year survival rate is approximately 80% (8, 9). This study revealed that patients with LLNM had worse recurrence rate and CSS compared with patients without LLNM. Approximately 29.4%–38% of MTC patients were accompanied with LLNM at the time of first diagnosis (10). In our study, the rate of LLNM was 46.64% in the SEER dataset and 34.23% in our department, which was consistent with the literature reports. Patients with LLNM predict a higher grade, higher aggression (tumor invasiveness), and increase in the risk of recurrence and death (11). Therefore, nodal metastasis assessment should be paid more attention to by surgeons.

Nevertheless, at present, the scope of lymph node dissection in the treatment of MTC has been controversial because of the uncertainty of lymph node metastasis. ATA guidelines suggest that LLND is needed to be therapeutically performed on cN1 lateral cervical compartment, but the role of prophylactic dissection on cN0 lateral cervical compartment remains controversial (18). On the one hand, some scholars pointed out that the rate of occult metastasis in the cN0 lateral cervical compartment was also relatively high for patients with central lymph node metastasis. This high incidence of such occult metastases has a high postoperative recurrence and reoperation rate and a low biochemical cure rate. On the other hand, LLND did not confer a survival benefit for patients at early stage but lead to low quality of life even after cure. Some authors suggest that expanding surgical field increases the risk of injury to parathyroid glands and recurrent laryngeal nerves, without any demonstrable benefits in terms of long-term survival (4). Conzo et al. recommend that while the dissection of lateral cervical subzone is not straightforward, the complication rate is not higher for experienced thyroid surgeons (19). Liu et al. pointed out that the complication of LLND do correlate with the entire experience and surgical volume of the surgeon.

The multivariate logistic regression methods are trained using the SEER database to develop a preoperative model. In this model, the C-index and AUC value of the training set were both 0.825, and the calibration curve suggested that the actual probability of LLNM corresponded closely with the predicted probability of LLNM in MTC patients, which indicated relatively good discrimination ability (20). Furthermore, the external testing set showed that the AUC of this prediction model is 0.818. The predictive models can serve as complementary items for thyroid surgeons in choosing surgical treatment modality, and it is worthy of clinical promotion and popularization.

There are several limitations in the present study. First, the SEER database also lacks several important tumor maskers such as calcitonin and carcinoembryonic antigen, which benefits prediction of lateral lymph node metastasis in MTC. Second, another weakness is the lack of the number and size of the central cervical lymph nodes data. Third, the validation set is a single-center study with a small number of samples, so the applicability is limited to a certain extent, and further confirmation with a multicenter, large sample, and prospective clinical trial is needed in the future.

MTC is a rare aggressive type of thyroid carcinoma, characterized by easy recurrence and early metastasis. Male sex, tumor size >38 mm, multifocality, extrathyroidal extension, and distant metastasis in MTC patients were significant risk factors for predicting LLNM. Our results may thus serve as a predictor for predicting LLNM in MTC and may perhaps also be referenced in preoperative discussions with patients regarding surgical methods.

The studies involving human participants were reviewed and approved by the Ethics Committee of Hangzhou First People’s Hospital. The patients/participants provided their written informed consent to participate in this study.

We would like to thank all the staff of the National Cancer Institute for their efforts toward the SEER program.

Copyright © 2021 Zhou, Zhao, Zhang, Wu, Lu, Mao, Jiang and Luo. This is an open-access article distributed under the terms of the Creative Commons Attribution License (CC BY). The use, distribution or reproduction in other forums is permitted, provided the original author(s) and the copyright owner(s) are credited and that the original publication in this journal is cited, in accordance with accepted academic practice. No use, distribution or reproduction is permitted which does not comply with these terms.