Objective: To study the characteristics, risk factors, and outcomes of local-regional recurrence of pheochromocytoma and paraganglioma (PPGL).

Conclusion: Long-term follow-up is necessary for all PPGL patients. Risk factors for recurrence of pheochromocytoma and paraganglioma differ, with primary tumor size and average Ki-67 count representing independent predictors for pheochromocytoma patients and SDHB mutations predicting paraganglioma recurrence. Although the treatment of recurrence can be difficult, patients should be treated once recurrence is detected as it decreases the risk of metastases and death.

Pheochromocytoma (PHEO) and paraganglioma (PGL), together referred to herein as PPGL, are rare neuroendocrine tumors arising from chromaffin cells of the adrenal medulla and extra-adrenal autonomic paraganglia, respectively. The incidence of PPGL is approximately 0.6 cases per 100,000 person­years (1). Once PPGL is diagnosed, surgery is the mainstay of treatment. Long-term follow-up is recommended for patients who have undergone surgery as even tumor-free patients are at risk of recurrence and metastases. Recurrence after resection is reported to occur in 3-16% of patients (2–7) and can be difficult to treat, especially if diagnosis is delayed. So far, few studies focused on the characteristics of local-regional PPGL recurrence, all which were small scale studies (2, 3, 7). The aim of this study was to study the characteristics, risk factors, and outcomes of local-regional recurrence of PPGL. The data presented in this article represents the largest study of PPGL recurrence to date.

We retrospectively studied clinical data of 96 patients diagnosed with local-regional recurrent PPGL in Peking Union Medical College Hospital, China. Local-regional recurrence referred to a reappearance of disease at the original site with or without metastases after complete surgical resection of the original tumor which had been confirmed by negative biochemical and imaging tests. Radiological features of local recurrence were often irregular in shape and closely adhered to surrounding tissues, and may be multiple nodules fused together. The recurrence-free survival was defined as the time elapsed from initial surgery until recurrence. Patients with metastases at onset, failure of complete resection of the primary tumor or new lesions which were not located at the original site of disease were excluded. We also retrospectively analyzed clinical data of 112 patients without recurrence with a median follow-up time of 8.0 (7.0, 9.8) years to study risk factors for recurrence. Patients without local-regional recurrence referred to those patients without recurrence or metastasis after complete resection of the primary tumor during the entire follow-up. Metastases were defined in accordance with the 2017 WHO classification of endocrine tumors. Metastases-free survival was defined as the time elapsed from initial surgery until metastasis. Clinical data, including gender, age at diagnosis, recurrence and metastases, symptoms, blood pressure (BP), primary tumor location, the maximum diameter of primary tumor, tumor secretion function (24-hour urinary catecholamine excretion), primary tumor pathology, genetic characteristics, treatment, and prognosis of recurrence were collected. The study was approved by the Institutional Review Board of Peking Union Medical College Hospital(S-K431). Written informed consent was obtained from all included patients.

The 96 PPGL patients with local-regional recurrence included in this study, consisting of 67 PHEO patients and 29 PGL patients, exhibited an average diagnosis age of 32.2 ± 14.9 years, average recurrence age of 39.0 ± 15.4 years, and a median recurrence time of 6.0 (4.0, 9.0) years after resection of the primary tumor (Figure 1). Twenty-one percent of patients (20/96) exhibited recurrence between 10 to 20 years after the initial surgery, and one patient exhibited recurrence 23 years after the initial surgery. Among recurrent patients, 47% (45/96) had multiple nodules in recurrent site, and 58% (56/96) had metastases, of which 71% (40/56) were synchronous metastases (recurrence accompanied with metastases) and 34% (19/56) were implantation metastases. At the current follow-up, seven recurrent patients had died. The 112 non-recurrent patients included 75 PHEO patients, 33 PGL patients and 4 patients with both PHEO and PGL. Non-recurrent patients had an average diagnosis age of 40.5 ± 12.9 years and a median follow-up of 8.0 (7.0, 9.8) years. Germline mutations were screened in 182 patients by using next-generation sequencing (including genes VHL, RET, NF1, SDHA, SDHB, SDHC, SDHD, SDHAF2, MAX, TMEM127, FH and KIF1B) (8), and Sanger sequencing. 33% (60/182) patients carried pathogenetic mutations in genes including SDHB, VHL, RET, MAX, SDHD and SDHA. Figure 1 The recurrence-free survival of recurrent patients with pheochromocytoma and paraganglioma.

The Characteristics and Risk Factors of Recurrent PPGL 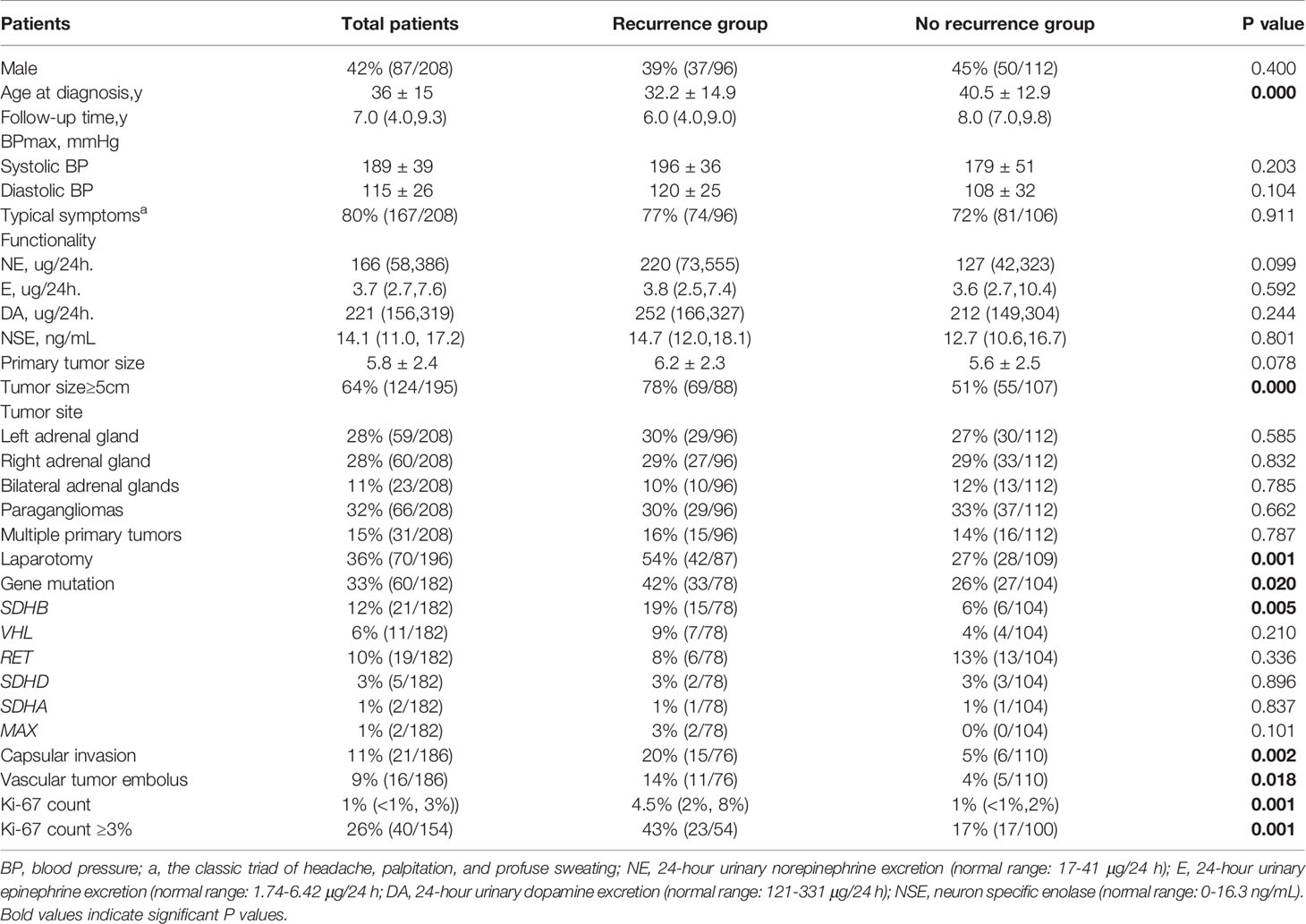 Table 1 Differences in clinical characteristics between pheochromocytoma/paraganglioma patients with and without recurrence.

Table 2 Hazard ratios for the risk of recurrence of pheochromocytoma/paraganglioma.

The Characteristics and Risk Factors of Recurrent PHEO

Table 3 Differences in clinical characteristics between pheochromocytoma patients with and without recurrence.

The Characteristics and Risk Factors of Recurrent PGL

Table 4 Clinical characteristics of paraganglioma with and without recurrence. 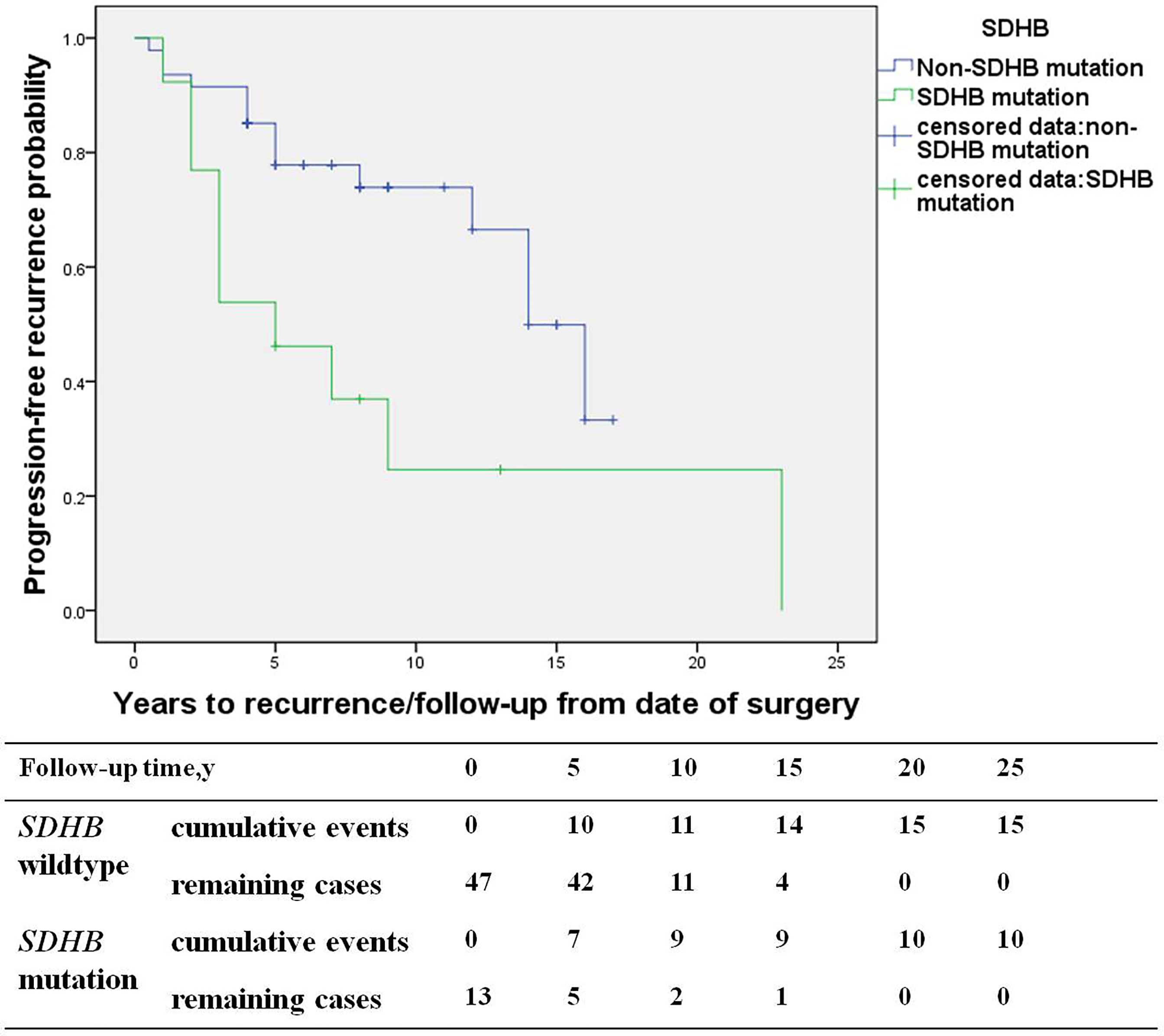 The Characteristics of Metastatic Patients 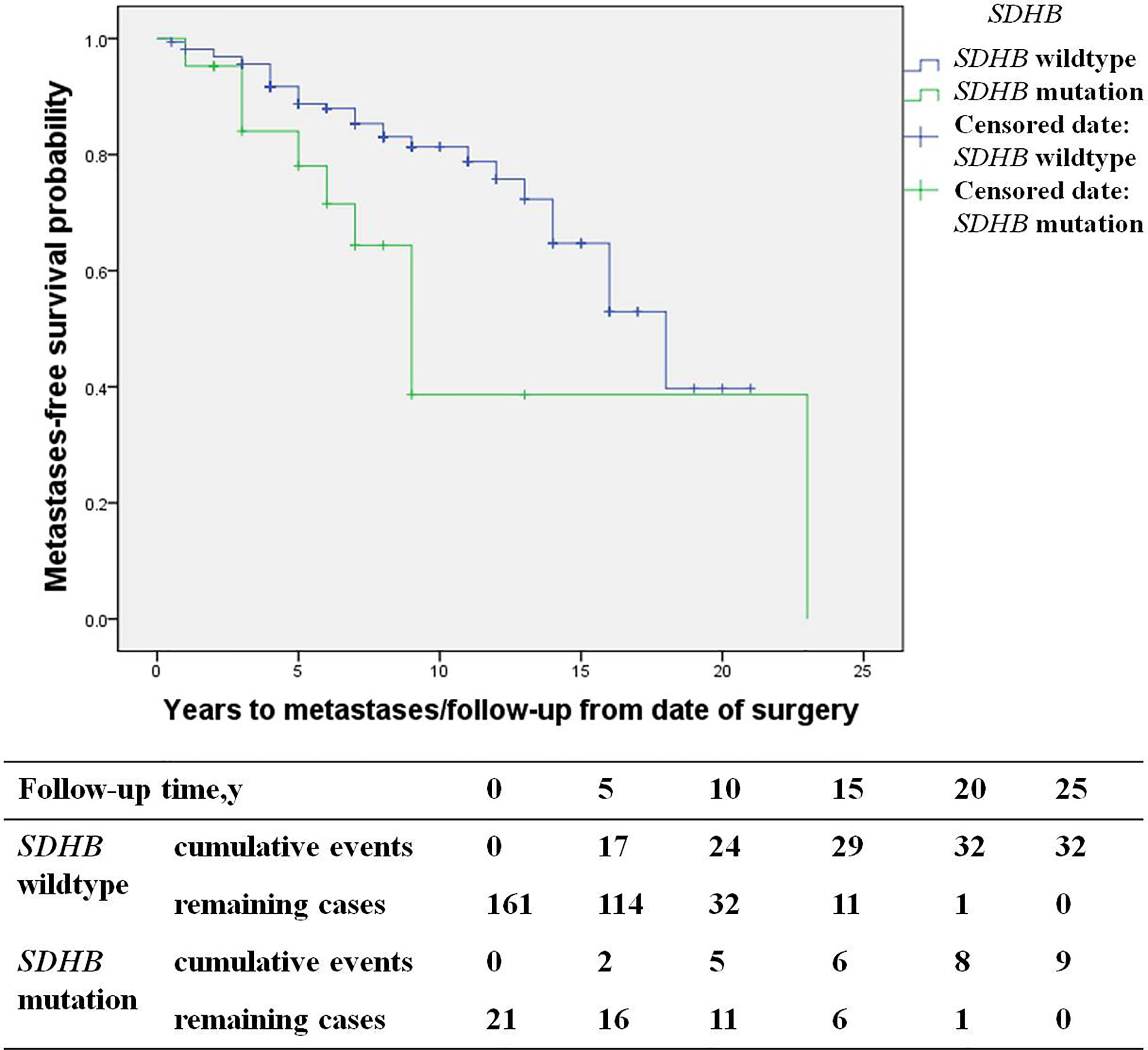 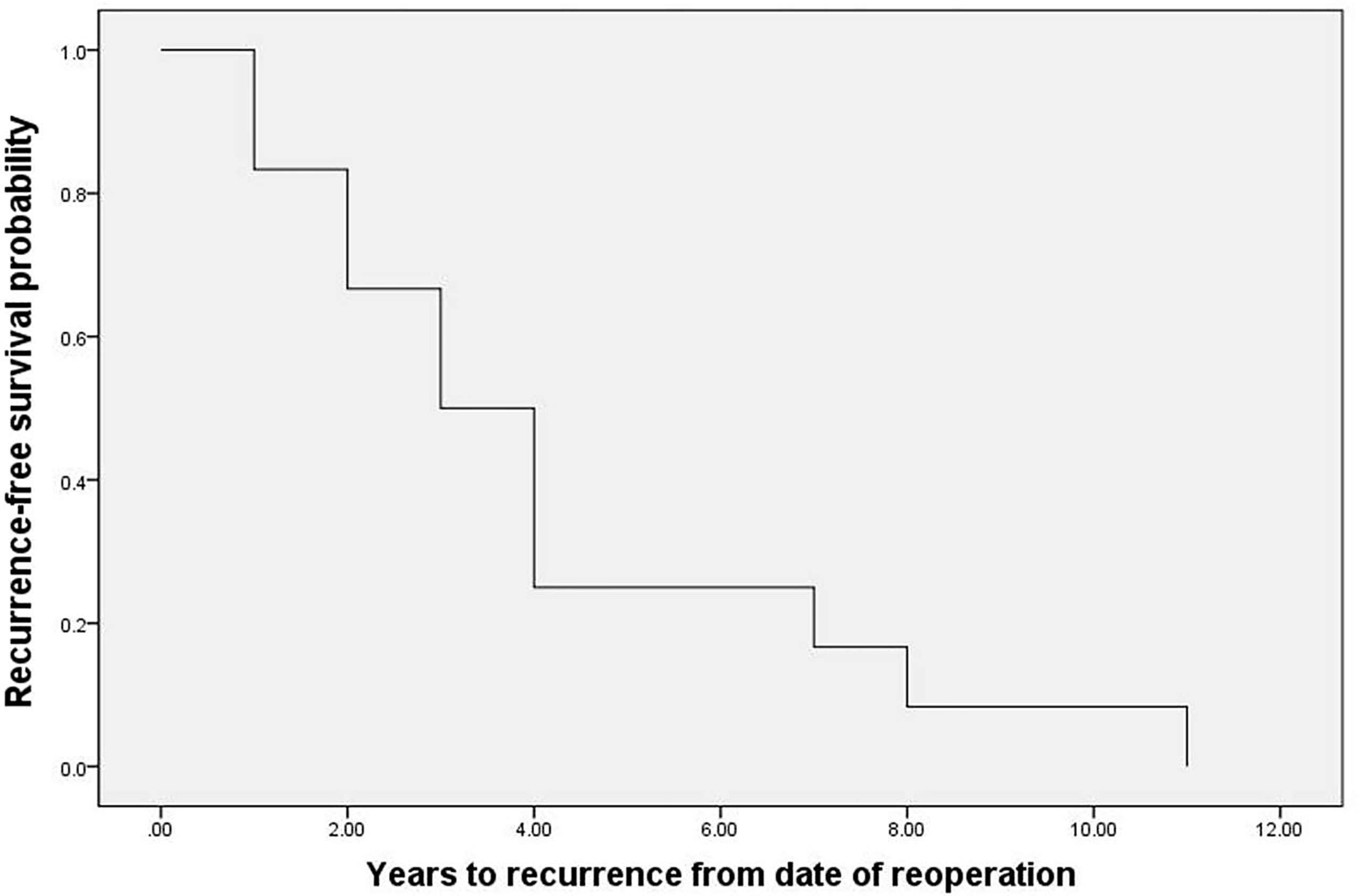 Recurrence of PPGL after resection occurred in 13.3% patients who were followed up for more than five years after tumor resection in our center (unpublished data). A recent systematic review showed that the overall rate of recurrent PPGL was 0.98 events/100 person-years, which suggested the risk of recurrence after complete resection was previously underestimated (9). In a meta-analysis of 13 studies, the mean time to recurrence was approximately 4 years (0.5-12) (6). In our study, recurrent patients exhibited a median recurrence time of 6.0 (4.0, 9.0) years after resection of the primary tumor, which is longer than previous reports (2, 6). Our data suggest that the follow-up of all patients after tumor resection should be at least 10-20 years, as recurrences may occur after a prolonged time after initial treatment.

In our study, we found SDHB mutation, primary tumor sizes ≥5cm, and average Ki-67 counts ≥3% in the primary tumor were independent predictors of recurrence. The results in our study were similar to previous reports (3, 7, 10–13). Moreover, we separately studied the predictors of PHEO and PGL, and found that the risk factors for recurrence of PHEO and PGL were different. The risk of recurrence was 5.1- and 2.4-fold higher in PHEO patients with primary tumor sizes≥ 5cm and average Ki-67 counts ≥3%, respectively. SDHB mutations were predictors for recurrence in PGL patients and not for PHEO, with the risk of recurrence being 4.6 fold higher in PGL patients with SDHB mutation than those without. Recent studies have shown that higher Pheochromocytoma of the Adrenal Gland Scaled Score (PASS) and Grading system for Adrenal Pheochromocytoma and Paraganglioma(GAPP) score were significantly associated with recurrence, and it was, respectively, 1.2- and 3.4-fold higher in patients with higher PASS and GAPP scores (13, 14).

In our study, 19 patients unfortunately exhibited implantation metastases which are considered to be related to tumor cells scattered in peritoneal cavity during surgical resection (15). The initial surgery of most patients was not performed in our hospital. Laparoscopic surgery may be more challenging if the tumor is large since these tumors more likely to be broken and tumor cells scattered when manipulated. The guideline recommends open resection for large (>6 cm) PHEO and PGL to ensure complete tumor resection, preventing tumor rupture and avoiding local recurrence (16). However, several studies have suggested that larger PPGL may be amenable to laparoscopy with safety levels similar to those for smaller tumors (4, 17). Here, we did not find that laparoscopic surgery can increase the risk of recurrence. The key to preventing implantation metastases is an endocrine surgeon with expertise in laparoscopic techniques and operating on PPGL. Furthermore, in cases of tumor rupture during surgical resection, careful follow-up is mandatory.

There were some limitations in our study. Firstly, local-regional recurrence referred to a reappearance of disease at the original site after complete surgical resection which had been confirmed by negative biochemical and imaging tests. However we cannot completely exclude the situation that a separate, metachronous PPGL arising in the same location. Another weakness of our study was the lack of PASS/GAPP scores which may be beneficial to predicting tumor recurrences.

Long-term follow-up in all PPGL patients is necessary. PHEO patients with primary tumor sizes ≥5cm, average Ki-67 counts ≥3%, and PGL patients with SDHB mutation exhibited an elevated risk of recurrence. Recurrence is difficult to treat as it is often accompanied by multiple nodes in recurrent sites, distant metastases, and implantation metastases, however it is recommended as it can reduce the risk of further metastases and death.

The study was approved by the Institutional Review Board of Peking Union Medical College Hospital(S-K431). Written informed consent was obtained from the patients included.

The authors gratefully acknowledge the invaluable support of the members of the Department of Endocrinology and Urology, Peking Union Medical College Hospital, and, especially, Professor Zhengpei Zeng and Hanzhong Li.

Copyright © 2021 Cui, Ma, Gao, Chang, Chen, Lu and Tong. This is an open-access article distributed under the terms of the Creative Commons Attribution License (CC BY). The use, distribution or reproduction in other forums is permitted, provided the original author(s) and the copyright owner(s) are credited and that the original publication in this journal is cited, in accordance with accepted academic practice. No use, distribution or reproduction is permitted which does not comply with these terms.